7 Fun Things to Do in Amsterdam 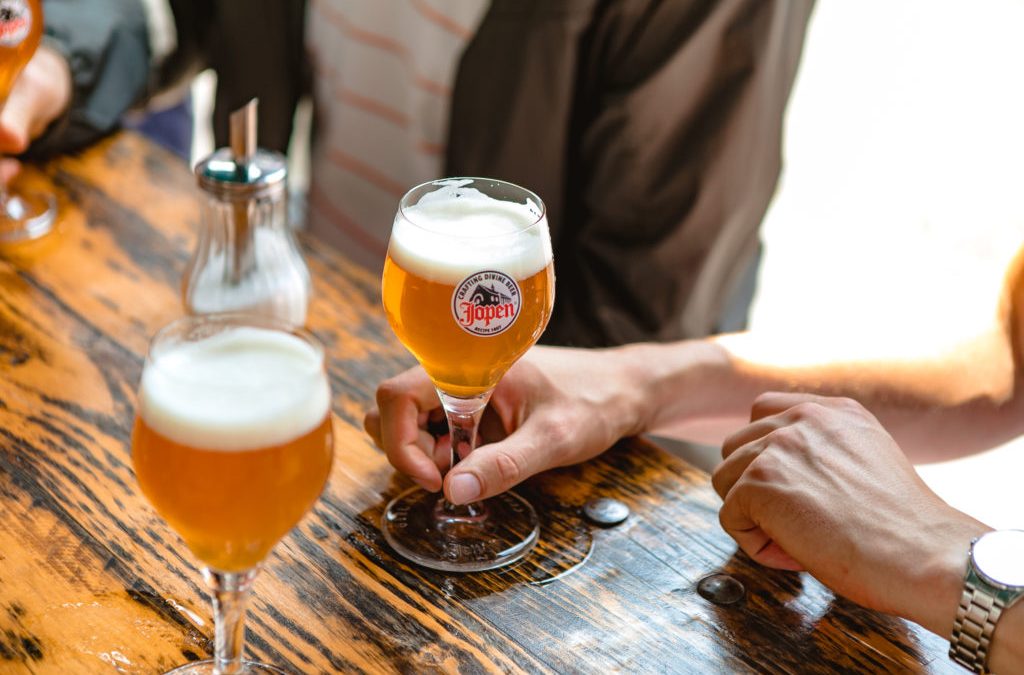 Whether you just started planning your trip, or need to fill a last-minute gap in your schedule, you could read for days about what to do in Amsterdam. Let me make it easy for you – in this blog I’ll share some of my tried and true tips for getting the most of the city.

The canals are truly something to marvel at and if you can, try to get inside one of the houses that line it! Depending on the decade you go for, you can find lots of different vibes. There are more than enough majestic 17th-century metropolitan palaces. Erected in the city’s Golden Age, houses like the Museum van Loon and the Willet-Holthuyzen Museum give you a taste of the opulence of the period, usually with gorgeous interior garden views you won’t see anywhere else in the city.

Onze Lieve Heer op Zolder is less fancy, but has a magnificent example of what a kitchen at that time would have looked like – as well as a Catholic church hidden in the attic, dating from the time when celebrating mass was forbidden.

For its size, Amsterdam is home to a surprisingly large number of museums. Even if you don’t think it’s really your style, the city has got a really wide range available, covering everything from art to history to Judaism to eroticism. And going to a museum is just about one of the best things to do in Amsterdam when it rains.

The city’s official website has a great overview of all of the museums, including descriptions and opening times. If you’re planning on visiting one of the more popular ones, like Anne Frank House or the Van Gogh, you’ll need to plan ahead: due to the large number of people booking tickets online, they can sell out fast. If you’re looking for something less crowded, here are some of my favorites:

The Netherlands is beer country, thanks not only to its own army of big-time brewers and squad of independent craft brewers. Outside of the super touristy bars, it’s pretty easy to find offerings more interesting than your standard Heineken and Amstel. If you’re not sure what you like, or want to really get a sampling of what’s out there, try Het Arendsnest, which only serves Dutch craft beer.

The staff are always super friendly and helpful, and usually let you try a sip of any of the tap beers before you take the plunge. If you want to learn even more, why not try one of the beer tours we wrote about? Or check out my suggestions for the best beer bars in Amsterdam!

I’m not really sure how the botanicals throughout the city get there, or how they stay so well taken care of, but Amsterdam is riddled with treats for flower lovers. The streets and canals of the Jordaan are lined with hollyhocks and rose bushes, and lots of little gardens to duck into.

Erasmuspark, in the west of the city, is home to “The Miracle Garden”, a project by artist Elspeth Diederix, with little paths playful winding through a mix of wild and cultivated flowers (I even spotted some strawberries once!). If you’re here in January, you won’t be disappointed by a lack of blooms – on National Tulip Day, Dam Square is covered with 200,000 of this much loved bulb, and you can take one with you for free!

Sit on a canal

One of my favorite things about Amsterdam is that it’s really so easy, and so enjoyable, just to laze around somewhere and take in the beauty. If you’ve got an hour or so, there’s no more enjoyable time-killer than sitting on a canal. It’s one of the great passive things to do in Amsterdam while still feeling like you’re having a good city experience. Take your time, either on a bench or with your feet just dangling off the edge, and watch boats glide by, hear the soft tinkle of bikes prattling over cobblestones, and maybe even spy a swan. Here are a few of my favorites:

Go on a bike ride

The bike is not for nothing the preferred method of transportation for the Amsterdammer, come rain, shine, or snow. The 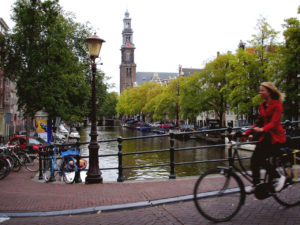 ability to get you door to door, no hills to contend with, and the novelty of seeing a massive bike parking garage at the train station are all reasons you’ll love biking in Amsterdam. However! I cannot stress enough that you should be comfortable and confident on a bike – if not already familiar with biking in mixed traffic including cars, scooters, and other cyclists.

What with the amount of bike lanes in the city, it is generally pretty safe, but people bike very fast and usually don’t appreciate having to navigate more unskilled traffic. If you still want to get the experience without the hassle, you could try renting a bike and just taking it for a spin around the park. Flevopark, Rembrandtpark and Vondelpark are great options for this, with the latter being the busier of the three.

If you’re comfortable with going longer distances, a trip to Durgerdam or around the fields in Amsterdam Noord is lovely as well. And one final note – as of Summer 2019, it’s illegal to use your phone while biking. You can be fined, so keep it in your pocket!

Hop on a boat 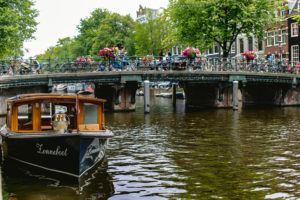 See the city from a totally different perspective by taking a boat ride through the canals. No matter what your speed, there’s a little something for everyone. If you want to pick your route, you have two options. For the cheap and active choice, pick up a pedal boat from around Leidseplein. From there you can mosey around the historic canal belt.

If you’d rather run on power, there are several companies, like MokumBoot, that rent electric boats for a few hours, with or without a driver. If you’re into a fancier vibe, we wrote an entire post about our favorite canal cruises!

Still looking for fun things to do in Amsterdam? Check out the rest of the Amsterdam articles on our blog!

The post 7 Fun Things to Do in Amsterdam appeared first on Eating Europe.