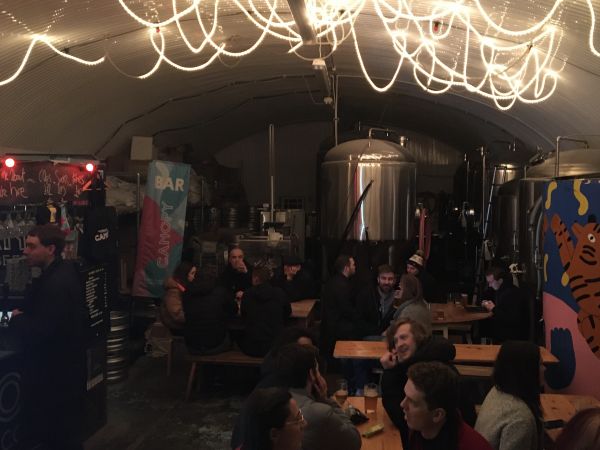 Under as well as off the beaten (railway) track in Herne Hill Canopy Brewery definitely is, as the trains run directly above (was that someone trying to open the toilet door? No, it was the shaking from the Southeastern service to or from London Victoria overhead)

I visited Canopy Brewery on a Friday night and there was a comfortable amount of seating both inside and out. My pew of choice on this visit was atop a stack of wooden pallets but choose a table inside and you really feel as if you are sitting amongst the barrels where the liquid magic happens. The outside has ample seating too, perfect for a mild evening or when the sun is out during the day. Unlike other craft breweries in the capital that have an ever-changing street food choice, Canopy allows you to bring your own, as in the case of a table that walked in with pizzas for their drinking crew. The beers are also rather special: IPAs, sours and stouts, both in the oyster and Imperial variety, the latter called You Donut which had a refreshingly different red fruit take on the usual coffee and cocoa approach.

Super easy to get to – only two stops away in zone 2 and 10 minutes from London Victoria – and tucked away mean Canopy Brewery is another perfect spot to sample some of the finest brews direct from the source that is fast becoming a reason to explore another side to London.

The post Canopy Brewery – Beer under the railway tracks appeared first on Spotted by Locals London.