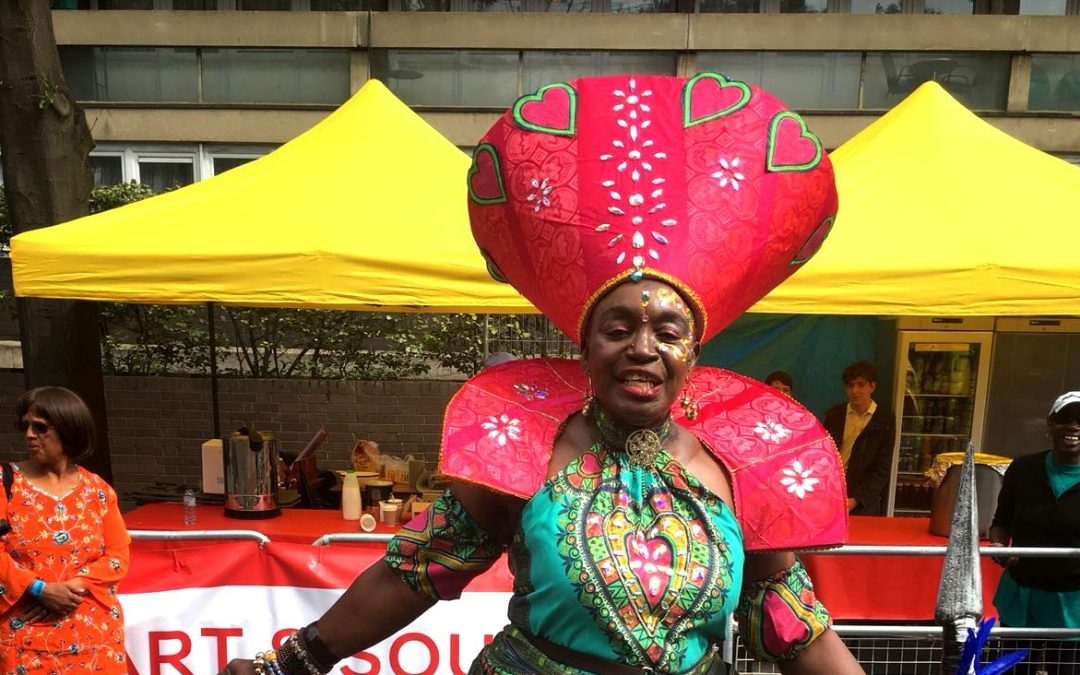 What was your first experience of Notting Hill Carnival like?

‘It was about six months after I met my husband [the late Vernon Williams, one of the co-founders of Notting Hill Carnival] in 1975. That was when I learned he had connections to Trinidad and he had brought a costume band. I went with him, and I couldn’t believe that there were costumes or Carnival, or anything happening in London, I was so excited. I felt very proud that they had taken the trouble to bring the art into London, and share with everybody what was so important in our Trinidad culture. That was my first important memory of Notting Hill.’

What’s your definition of mas, and what it means to play mas?

‘I’m a Trinidadian and Carnival is an integral part of our lives. It’s a significant legacy that we have been handed from our Black history, it’s part of our heritage. In Trinidad and most of the Caribbean offshoots of Carnival, the origins stem from the emancipation of slavery. A lot of the traditions, and even the music that we still play now, stemmed from these African slaves trying to communicate because they were forbidden to by the white slave masters. They started their own forms of celebration and communication through some of the characters we still portray today. That’s why I think it’s essential. You could look at it like Christmas or Eid or Diwali. It’s almost like a religion for us, and it needs to be celebrated. We need to understand where we’ve come from so that we can really understand where we’re going.’

What is different about Notting Hill Carnival, compared to other Carnival celebrations across the world?

‘In London it’s quite different because it’s much more inclusive. We have a lot of different traditions that are encompassed within the Notting Hill Carnival scene, like the Brazilian bands. All sorts of people use Notting Hill Carnival as a platform and I think it’s important. The Carnival is not indigenous to London, so we have to bring elements to it that are important to us.’

You work with your daughter to create costume designs for Genesis. What’s it like working together as a Notting Hill Carnival family?

‘It’s exciting. We must be quite rare, to have children work so closely. It’s very important to us. My husband introduced me to Carnival when we met, and I was so in awe of all the talent that I saw from that time. Those were some of the reasons that made us start our own band [Genesis Mas]. I just felt like I had won the lottery when I met my husband because he was a fellow Trinidadian. I was so excited that somebody could share the culture with me, and when I found out he was a designer himself, that was like heaven. So that was something I wanted my children to be very much steeped in, our legacy. The life we both came from. And they did, they are prolific pan players, and my daughter is a genius designer. She learned all of it from her dad. I felt so lucky that they adopted and embraced our culture, even though they were born here.’

Do you find it makes it easier, or harder, to design as a team with your own daughter?

‘It makes it easier. I think it has brought us a lot closer. If I tried to interpret something and I said “look, that is not going to work”, she would modify that design. I make things and I put them on her. I’ll say “nobody is going to go on the road looking like that. Make it aesthetically pleasing, as well as comfortable to wear”. We can do that 24/7. I don’t have to wait to make an appointment, and she doesn’t have to either. She just says “mum I’m coming over, I don’t like how this looks”. It’s a really wonderful working relationship we have.’

As Carnival is not taking place on the streets this year, what would you like people to reflect on, and understand about Notting Hill Carnival?

‘I would like the public to appreciate the art, and understand that Carnival is a creative art. Some of us are passionate about it because it’s part of our heritage, others do it as a business enterprise, so a lot of the costumes are coming from different perspectives.

I once did the opening ceremony speech for Notting Hill Carnival. I had ten minutes. I was told, people are always asking “why do we bother? Why are we on the streets?”. So I framed my little talk around that, about the legacy, the Caribbeans and the Africans, and about the celebration of freedom and so on. About two hours later I saw these women running towards me on the street. This woman came up to me with some of her friends and said “I’m sorry to bother you and your band but I heard you this morning, and do you know it was the most amazing thing I’d ever heard? I had no idea why the Notting Hill Carnival goes on. I was one of those people who said “why do they bother?”. But it was so enlightening, and I now understand what it means.” That made my day. There must be hundreds of thousands of people like her. We need to send that message.’

For more timings and schedule details on the online Notting Hill Carnival, check out our guide.