Koi Ramen Bar – For when only ramen will do… 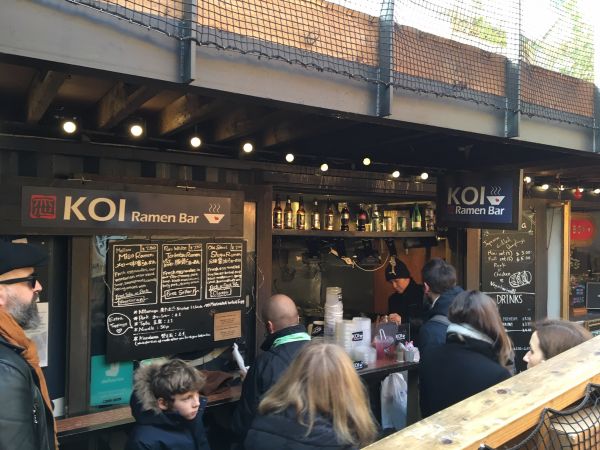 London’s ramen scene upped its game about 5 years ago when a bunch of specialist players entered the market delivering relatively authentic ramen to the masses. These include famous Japanese chains such as Ippudo and Kanada-ya alongside home-grown ones which emerged around the same time.  Koi Ramen, however, remains very much under the mainstream radar  – an independent micro-chain with outlets at the excellent Pop Brixton complex & Tooting Market.

As a self-confessed ramen addict, there are some days I wake up and just HAVE to get a satisfying bowlful, Koi is always at the top of my list.  The pork bone broth known as Tonkotsu is the most ubiquitous ramen style in London, and whilst the broth at the other chains’ versions can be a little too thick and heavy, Koi’s version is a little lighter – without losing that deep, addictive satisfaction that a bowl of ramen should deliver. Owner and ramen master Ming is a stickler for consistency, using a thermometer to ensure each and every bowl is piping hot, with his straight noodles just the right side of al dente. Alongside the signature Tonkotsu, there are miso and veggie miso varieties on offer.

It’s uber-casual dining: ramen is served in a paper bowl and you find a place to perch. But at £7.50 a bowl, it’s a fraction of the price of the chains, and a load tastier. Top tip – Save some broth and order the “Kaedama”: an extra portion of noodles thrown in at the end for just £1 extra.

The post Koi Ramen Bar – For when only ramen will do… appeared first on Spotted by Locals London.