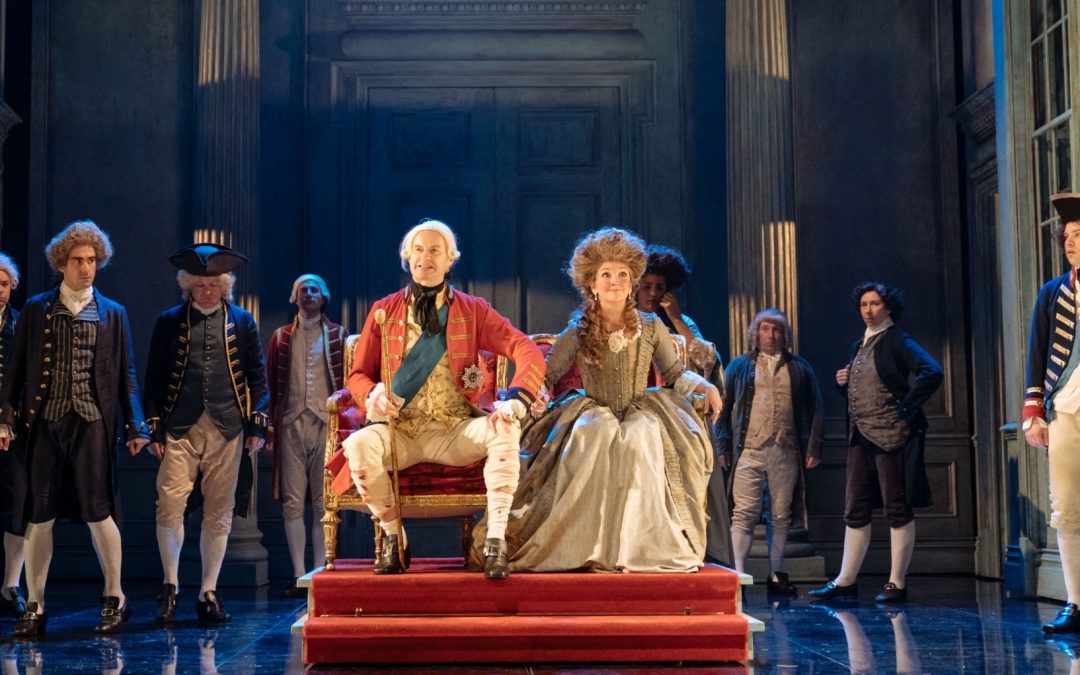 One of the highlights of lockdown (not a phrase we thought we’d ever be saying, tbh) has to be the weekly theatre dose administered by London’s National Theatre. The line-up of plays streamed for free via YouTube – a new one released each Thursday – has been keeping audiences at home on the edge of their sofas. And they’ve been pretty starry, too: James Corden, Gillian Anderson, Benedict Cumberbatch, Tamsin Greig and Tom Hiddleston have all already appeared on our on-screen stages.

The next instalment to June’s bill lives up to the celeb factor of productions before it. National Theatre at Home is currently airing its recording of Mark Gatiss in ‘The Madness of George III’, staged in Nottingham Playhouse in 2018. This performance of the Alan Bennett play – which was first staged at the National Theatre in 1991 and later adapted for film – was the first NT Live collaboration to take place with a venue outside of London. It sees Gatiss depict King George III’s unravelling mental state in the latter half of his reign.

After that, the countdown begins. The National Theatre has announced its final plays to stream for free, with five weekly instalments taking us through to July (presumably at a point where we can all go ‘out’ with a bit more freedom). On the bill next is ‘Small Island’, an adaptation of the Andrea Levy novel about the Windrush generation that airs on Thursday June 18 to coincide with Windrush Day 2020 on Sunday June 22. And the entire season wraps up with a production of ‘Amadeus’ that we described as ‘overwhelming’ when it first hit the stage.

With the greatest archive of cinema-quality recordings of stage plays of any theatre on the planet, it’s little surprise that the National Theatre has been doing such a great job entertaining us all. The NT Live programme was designed to beam productions from the NT into cinemas across the country, but there are, of course, no cinemas in operation at present. So the NT has switched to broadcasting via its YouTube channel.

National Theatre at Home launched on YouTube on April 2, and now, every Thursday (7pm BST/2pm EST) sees a new play released – free to watch for one week – along with bonus content including cast and creatives Q&As and post-stream talks.

There’s been a definite emphasis on good cheer for the line-up so far, which kicked off with Richard Bean’s beloved farce ‘One Man, Two Guvnors’, starring a pre-chatshow-days James Corden, and which drew more than 2.5 million viewers. But the final additions to the line-up show the NT’s power at tackling the topical, too.

May 14 ‘Barber Shop Chronicles’ by Inua Ellams. Read our review.

May 28 ‘This House’ by James Graham. Read our reveiw.

June 18 ‘Small Island’ an adaptation of the novel by Andrea Levy. Read our review.

The NT has confirmed that live performances won’t restart until at least July.

For more information on National Theatre at Home, click here. To find out more about this week’s play streaming on YouTube from 7pm on Thu Jun 4, click here.

For other ways you can watch plays while London’s in lockdown, click here.