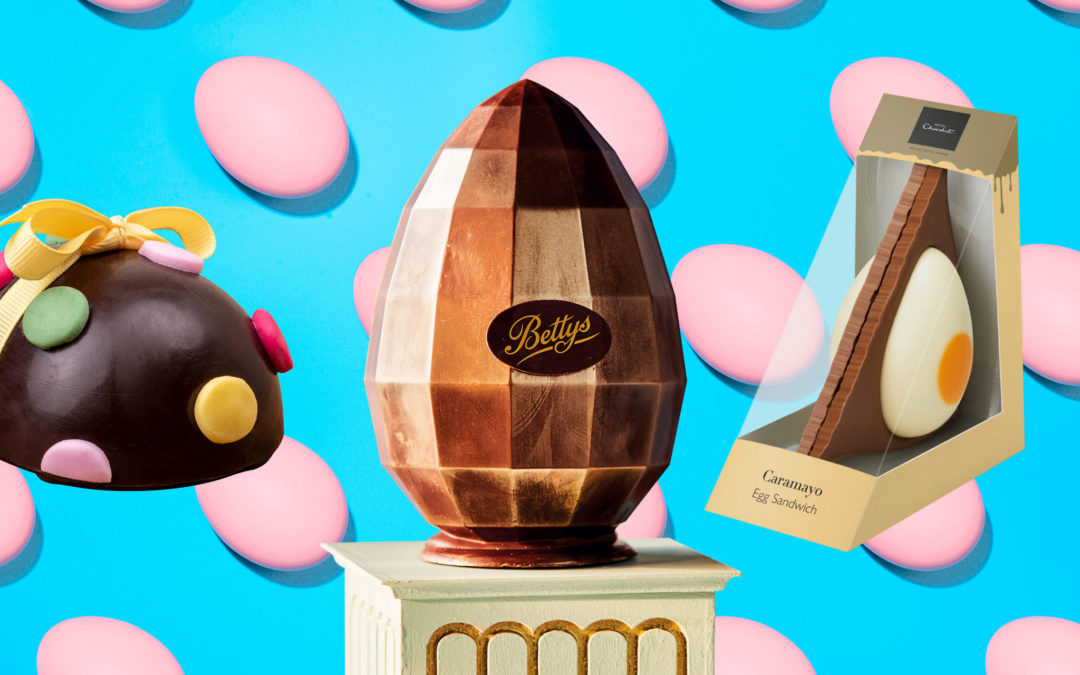 Even if you’ve comfort-binged your own weight (and that of your bubble) in delicious, soothing chocolate over the last year, that doesn’t mean that Easter isn’t a time for a proper cocoa knees-up. BUT, maybe this year treat yourself to something decent. We know that the local petrol station will be doing three ‘famous brand’ Easter eggs for £7 when you buy 20 litres of fuel. But those offers aren’t for you. They’re for useless, badly organised people. These exotic – even sometimes challenging – confections are the real, sweet, deal. And not an egg pun in sight.

Veering wildly off-piste and towards a treacherous sugary cliff edge, London’s Creams Café has hopped into bed with Cadbury’s to create this deliciously disturbing mash-up of egg and doughnut, a bit like the famous Luther Vandross burger, only with less beef. For £8.95 you get four doughnuts, two with white chocolate, mango sauce and half a Creme Egg, and two with milk chocolate, chocolate shavings and a nest of Mini Eggs. The whole concept is so gauche that it must speak to the inner child in all of us, possibly one being sick on the school coach. Available online from March 22 to April 9.

Buy them for: Someone who needs punishing. Who’s been v v bad.

2. The one you can eat in the car in a layby: Hotel du Chocolat’s caramayo egg sandwich, £10

The brilliant Hotel du Chocolat used to do an ‘ostrich’ Easter egg which cost 80 quid and contained more than a kilo of chocolate. That one seems to have dropped off their roster, but we love this cutesy little number. Granted, it’s not a very accurate ‘sandwich’, which popularly tend to put the egg inside the triangles of bread, rather than on the outside, like some crazy, Pompidou Centre move. But it looks and tastes great, and that packaging is adorable.

Buy it for: Anyone who’s missing their daily Pret trip

Three dimensions? Old hat! The good people at London artisanal chocolatiers Brik have stuck to their brutalist concrete-slab guns and come up with a range of flat eggs. They might not offer the same satisfying crushability as the traditional hollow egg, but at least you won’t lose half your chocolate in crumb form down the back of your sofa. The flavours are classic Brik, like this one with a sweet-salty caramel offset with a tang of baobab, then decorated, Olafur Eliasson style. Classy! Oh, and they probably fit through your letterbox.

Buy it for The flat-earther in your life

Clearly the product of an advanced alien super-species (as people from Yorkshire like to see themselves), this is hardly what we were expecting from a venerable, century-old northern tearoom. It’s dark chocolate! It’s vegan! It has no curves! The chocolate is slightly confusingly described as being both ‘Venezuelan’ and ‘Swiss’, which sort-of suggests war criminals. It’s such a lustrous, burnished beauty, though, that if it does break open to reveal our future overlords just as we’re tucking into the roast lamb, we’re pretty much fine with that.

Buy it for: Your Venezuelan/Swiss/Yorkshire vegan mate

‘Briagadeiros’ are popular Brazilian treats made from condensed milk, chocolate and various flavourings. They’re sweet, in other words. This phenomenal egg/cake from Brigadeiro Gourmet combines a choice of dark or milk outer shell, a choice of chocolate, carrot or victoria sponge filling, and a choice of flavoured brigadeiro. You might baulk at it only being half an egg, but you wouldn’t want to tackle a whole one, believe us. That way coma lies…

Buy it for: A handsome moustachioed bachelor

Supporting the Bloody Good Period initiative that supplies sanitary products to refugees, asylum-seekers and other victims of ‘period poverty’, this handsome, scarlet-wrapped beauty from London’s Rococo Chocolatiers ain’t cheap, but £5 from each one goes to the cause. Okay, so this isn’t going to be to everyone’s taste, and you might have to pick its recipient carefully, but you can’t knock its chutzpah, and its thick milk-chocolate egg with Angelsey salt, containing salted-caramel truffles, sounds fantastically good.

Buy it for: A politically engaged greedy guts

We’ve had Easter eggs packaged like real eggs before. In fact, Dominique Anselm Bakery once sent a box to Time Out’s office that were chocolate inside real eggshells, which our photographer Andy unwittingly ate whole, describing the casing as ‘a bit hard’. This box from Allpress Espresso, though, has a crucial twist: actual coffee in the shape of a double espresso (dark) or flat white (milk). Maybe see them as breakfast eggs: smash a couple of these on Easter morning to set yourself up for a long day of eating more chocolate.

Buy them for: Anyone who gets real bad cocoa hangovers

Don’t neglect your alcohol intake. Get a cocktail delivered.