The Museum of London Has Closed, Long Live the London Museum 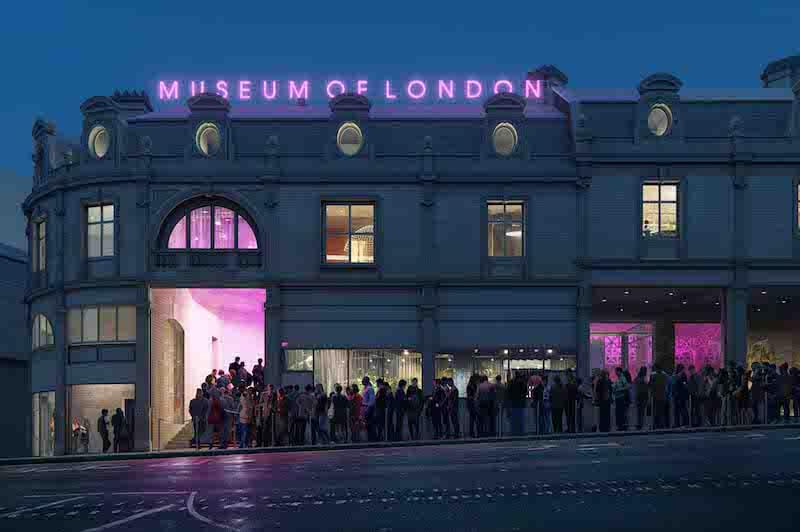 In a city with no shortage of great history museums, the Museum of London is one that is dedicated to the city itself and its growth from a small settlement in pre-Roman times to the megalopolis world capital it is today.  The museum began in 1976 as a merger of the collections belonging to the Guildhall Museum and the London Museum.  Once located near the Barbican estate at 150 London Wall, the museum closed on December 4, 2022 to begin its move to West Smithfield near Smithfield Market.

As part of its temporary closing before the move, the Museum of London held a spectacular going-out bash.  For the period of December 3 to 4, the museum remained open for twenty-four hours straight.  Over 13,000 people visited the museum during this time, giving it one of its busiest weekends in its forty-five-year history. It was during this weekend that the museum decided to go out with a bang by celebrating homegrown London artists and influential London music, with everything from EDM to punk getting playtime during this mini-festival.  It’s almost appropriate, given that the likeliest proposed use is for the London Symphony Orchestra to take over the space as its permanent home.

While the new museum building won’t be opening until 2026, the Museum of London brand is already going through changes.  The Museum of London Docklands opened in 2003 to observe the history of the London Port, including its influence on turning the United Kingdom into a world power and its association with the terrible legacy of the slave trade.  This part of the museum is already rebranding to the London Museum Docklands and will begin operating as such in January 2023.

In some ways, the rebranding of the Museum of London to the London Museum is like a return to its past. The original London Museum opened in 1912 and operated out of Kensington Palace and then Lancaster House until the building’s damage from the London Blitz meant a move back to Kensington until its eventual merger with the Guildhall Museum.  The change in name is almost poetic for a museum that focuses so much on the past even as it slots towards its future.

And speaking of that future, we turn our attention now to the museum’s new home and its plans inside the walls of its Smithfields location.  The London Museum will open in what is currently Smithfields Market, an 800-year-old facility that has operated as a meat market and will itself be relocating to Dagenham.  With a team of architects, the London Museum will revamp the inside of the building to house new galleries for its collections while retaining its Grade II listed Victorian exterior.  These changes include a gallery dedicated to items documenting the COVID-19 pandemic, exhibits designed to teach and entertain younger children, and viewing windows that show the nearby Thameslink trains running past.  The museum also plans to have a gallery about the city’s history with protests and will include the “Trump Baby” balloon floating over other artifacts of free speech.  Its ground floor, meanwhile, will retain much of its original Victorian market architecture and be utilized as a lobby and event space.

Until the new museum opens in roughly three years, Londoners will simply need to get by with other museums in the city, though of course, the London Museum Docklands will remain open.  When the London Museum does open, you can expect a bash on part with its closing, one curated by Londoners to celebrate the city’s long history and its culture.  The museum plans to host a large festival beginning in 2025 that will allow a limited access to the Smithfields location to better acquaint Londoners with their museum’s new home.

The Museum of London Has Closed, Long Live the London Museum – Londontopia – The Website for People Who Love London