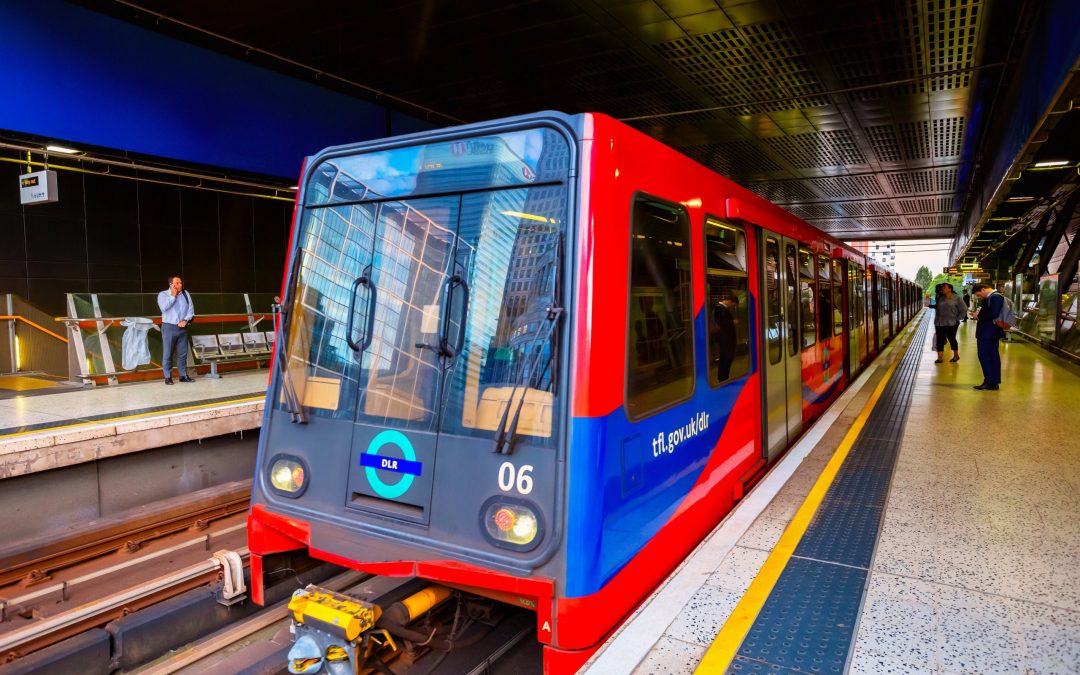 Moving onto an oft-forgot member of the London Underground, the Docklands Light Railway is a unique entity of all the lines.  The DLR is also one of the youngest parts of the Underground as it’s only been around since 1987.  As it celebrates its 35th year of ferrying Londoners around the Docklands, we’re going to explore its history from its origins through multiple extensions that have brought DLR’s route to about 24 miles.  Read on and you might find there is plenty of interesting history related to DLR that you’d never considered. (Note: the DLR is not technically a ‘Tube’ line but is a light railway owned and operated by Transport for London).

The Docklands Light Railway came about as part of the redevelopment of the Docklands by the London Docklands Development Corporation.  After World War II, the area around the Docklands became less utilized for shipping due to the development of containerization.  The docks had been connected to the national railway system through the London and Blackwell Railway, but that closed in 1966 due to a lack of traffic.  When the LDDC got its start, a light railways system was envisioned as part of the development, helping to solve issues of transporting Londoners from Central London into the eastern part of the city.

The LDDC then commissioned London Transport to explore several different routes and the LDDC and London Transport had hoped to use existing routes to develop DLR, but it appeared that there was no capacity to integrate the light railways into the existing network.  Two routes were developed from Stratford to Island Gardens and Tower Gateway to Island Gardens.  The DLR was meant to be constructed as cheaply as possible and only 11 trains were purchased, with only 9 or 10 expected to run at peak times.  DLR was also developed to be entirely automated to cut down on staff, with the trains and stations both being automatic.  However, this didn’t mean that the trains had no human operators in case of a problem, with Passenger Service Agents who not only patrolled the trains but could take control of them if necessary.  While the Underground didn’t have the capacity at the time to link to DLR, the railways also made use of existing lines wherever possible with little new construction required.

Queen Elizabeth II then opened the line in 1987 and was immediately much more successful than predicted.  It wasn’t long before the hourly ridership numbers were outpacing the original predicted daily figures.  This necessitated an increased number of trains and soon extensions to DLR.  The railways experienced numerous growth spurts throughout the 1990s and 2000s, expanding first into the City of London and the Royal Docks, then to Greenwich and Lewisham, and finally to the London City Airport and Woolwich.  Eventually, the trains were further expanded to three cars while further expanding out to Stratford International rail station in anticipation of the 2012 Olympics.  If you were to look at the DLR map as it exists today, you’d might think it resembled a giant squid with its tentacles flailing about the Docklands.

Originally run by London Regional Transport, the LDDC took over around 1992 and then operated by private sector franchisees from 1997 to the present.  When Transport for London came about in 2000, they took over the management of DLR while continuing to run it through franchises, with the current franchisee being KeolisAmey Docklands LLC who has held the franchise since 2014 on a seven-year contract that was extended another four years in 2021 to run until 2025.  It remains to be seen how DLR will continue to grow further in the future, though Transport for London will certainly be up to the challenge.