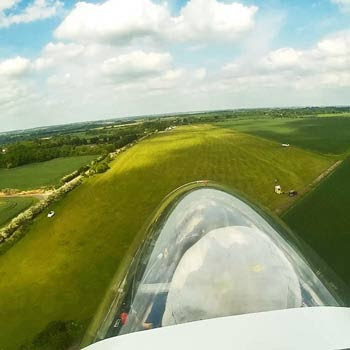 Glider aerobatics. Surely that’s an oxymoron? Gliders are meant to well glide…rather than perform aerial tricks aren’t they? Prepare to be amazed then as you take to the sky in a high performance glider to experience some classic aerobatic moves.

You’ll be taking off from Ridgewell Airfield the World War Two aerodrome on the Essex/Suffolk border near Sudbury. It’s a brilliant place for performing aerobatics as it’s gliders only here and you’re in unrestricted airspace so there’s all that big blue sky to play with.

But first we have to ask the question. How does a glider (an aircraft that has no engine) do aerobatics? Well the simple answer is that the glider doesn’t need an engine to carry out such moves. From the moment the tug plane releases the glider the pilot uses the energy efficiently to trace those graceful patterns in the sky with wonderful flowing lines.

The pilot who’ll be taking you up on this superb aerobatics flight is glider champ Alex Harris. He was the UK’s youngest solo glider pilot and has competed in British National and World Championship aerobatic competitions. It’s a mighty fine skill to have and one that makes for a unique aerobatics experience in our book which is why we couldn’t wait to add it to our experience range.

Alex is now Chief Flying Instructor at this small and friendly club and when he’s not doing his day job driving big airliners he loves nothing more than taking passengers up for aerobatics flights in one of the club’s two seater gliders.

Expect to try some basic aerobatics manoeuvres first such as 45-degree down-lines. If you can literally stomach it you’ll be treated to a sequence of more advanced aerobatics that could include spins loops chandelles. And yes the moves are exactly the same as those done by powered aircraft. We’d even go as far as saying that the extra wing-span makes the moves even smoother and elegant.

Combining the grace of powerless flight and the agility of a high performance aircraft glider aerobatics is an amazing experience. It’s pretty unique too which means you won’t find every glider club offering the extra thrill of aerial stunts as part of your flight. Book your slot now and get inverted in your glider!