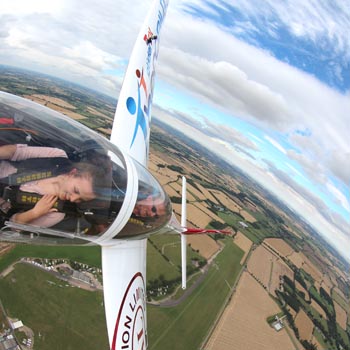 Go gliding at Leicestershire’s Husband’s Bosworth glider club! We are offering three ways for you to get airborne with motor glider flights winch and aerotow launches on offer. Whichever you chose you’ll be treated to a superb soaring experience with an expert instructor at the helm to show you what gliding is all about.

Established in 1953 this club has been gliding out of Husbands Bosworth near Lutterworth since 1963. It’s a real club atmosphere here with upwards of 2000 members all pitching in alongside a core full-time staff to make sure the club runs smoothly. There are lots of social activities too and visitors are always welcome – there’s even AnJos cafe in the clubhouse for a cuppa and bite to eat.

Over the years the club has expanded and now houses around 100 privately-owned gliders in the various hangars on the airfield. Several dual-controlled gliders at Husbands Bosworth make up the dedicated training fleet and you’ll be heading up in one of them for your lesson. The idea is to give you a taste of what gliding feels like and get your hands on the controls for a bit.

If you go for motor gliding you’ll be powering yourself up into the Leicestershire skies. Once you’ve reached altitude the engine is switched off and you are gliding. Flights in motorised gliders usually last around 30-minutes and show the autonomous way gliding can be done with these rather unique aircraft.

For winch launches your glider is attached to a cable and you’re literally winched up into the air at around 1000ft. An aerotow launch is where the glider is pulled up and into the air by a tug plane before being released. At Husbands Bosworth they are particularly proud of their very nice fleet of Supermunks that undertake aerotow duties. These are Chipmunks that have been modified to a British Gliding Association design to turn them into the ideal glider tug plane. As you can tell just getting into the air in a glider is quite an experience. What’s more this Leicestershire club offers aerotows to 2500ft (most glider experiences are to 2000ft) giving you the potential for even more glide time.

Flying all year round and seven days a week in the main spring to autumn season with excellent on-site facilities and a very buoyant club scene it’s no wonder Husbands Bosworth regularly hosts gliding competitions. With over 30 British Glider Association qualified instructor pilots in the team too isn’t it time you went gliding in Leicestershire?