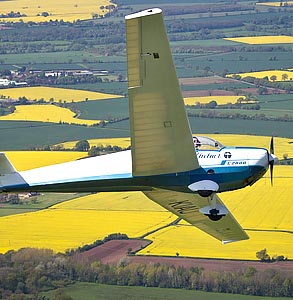 This is gliding from Enstone Airfield – but with a difference. You’ve got power! There’s no tug plane and no winch either because in motor gliding you get airborne under the aircraft’s own power. Then when you’re high enough the engine will be turned off and you’ll glide over the best bits of Oxfordshire.

Motor gliders are just that – gliders that have an engine and propellor. This means motor gliders self-launch out of Enstone Airfield. Instead of being released at a certain altitude you simply fly up to the height you want to achieve switch off the engine and get soaring. This is a brilliant moment in the experience as you switch from manmade to natural with just the swirling noise of the wind that carries you.

And once you’re up there what can you expect to see? Well this is another reason why this airfield at Enstone is a popular place. When you’re soaring in your motor glider you are literally minutes away from all the lovely Oxfordshire villages such as Chipping Norton (and the stars who live there!) with the likes of Moreton in Marsh and Stow on the Wold in the Cotswolds just beyond.

It’s so refreshing to see the pretty county of Oxfordshire from the air and to look down on any traffic jams (rather than be in them for once) whilst you glide gracefully at a few thousand feet above the towns and villages below. If you opt for the extended half hour flight you might even get as far as seeing some of the main spires and landmarks of the scholarly city of Oxford on the horizon whilst you motor glider on by.

Don’t forget unlike most standard gliders a motor version has a side-by-side cockpit so the you go gliding out of Enstone Airfield you will be sitting right next to your instructor. This gives you the advantage of being able to see everything that the pilot is doing which we thinks helps you feel more secure comfortable and at ease. What’s more if you fancy having a go at the controls for yourself you can do as these aircraft are dual control.