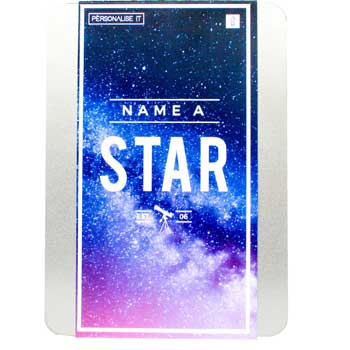 Name a Star and register you love for the star in your world!  With millions of stars out in space only the nearest and brightest that shine in space have been given a name so you can add a real twinkle to the life of someone you love by buying this name a star gift box from Intotheblue and naming a star after them.

Most of us have heard of some of the more well known named celestial bodies in our solar system like Polaris the Pole or North Star Sirius the dogstar or the bizarrely named Betelgeuse. We are also likely to recognise some of the classic constellations visible in the northern hemisphere such as Orion with it’s distinctive belt of three stars Ursula Major (the Great Bear) and the famous Big Dipper. Of course its easy to forget that our closest neighbour in space has the most recognisable title of all…the Sun! With the naked eye it’s possible to see a few thousand twinkling wonders in the dark night sky so how cool would it be if it was you naming a star out there?

Inside our name a star gift tin you’ll find a variety of information including a registration form a leaflet with facts figures and a history of stars a souvenir poster showing famous constellations and an astronomy booklet which provides information about space the planets and other heavenly bodies like the moon. With all these facts and figures to hand you’ll soon know all about the sky at night how stars differ from planets in that they emit light rather than appearing to shine whilst a planet reflects light and other amazing astronomical facts.

Once you have chosen the title for your star you’ll be sent a name a star UK deed certificate confirming the naming of a star and displaying its co-ordinates so you can do some research and work out its location. Because of the vast numbers of bodies out in space it’s unlikely that your star will be visible however the magic of this name a star gift is that whilst it may be many light years away you’ll have proof of the name of a star just for you. You can call it whatever you like (within reason!) and it’s guaranteed that each one in the registry is only designated once so no-one else can name your star!

People do ask if they name a star do you then own it ? Unfortunately no-one can legally go naming a star and then be the owner but you can be assured you’ll be only one to have given yours its special title. We think these Name a Star UK gifts are a fun and unusual way to celebrate a birthday or another special occasion and one which really will make them feel lall starry-eyed! IntotheBlue providers of a superb selection of gifts for men women and children of all ages including this fascinating name a star gift.