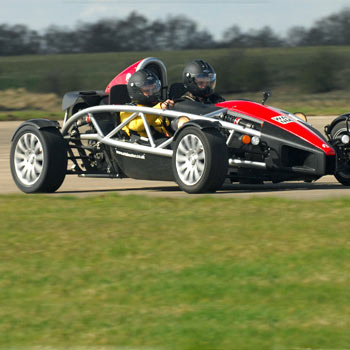 This Ariel Atom thrill is the stuff of dreams. This car is more akin to a four-wheeled motorbike as it weighs in at just 500kg pulls 600bhp per tonne and does 0-60mph in 2.8 seconds – and it’s just waiting to be driven by you at either Elvington in Yorkshire Blyton Park in Lincolnshire Castle Combe in Wiltshire or Bruntingthorpe Proving Ground in Leicestershire.

What’s more the car is lovingly hand built in the UK and it shows. It’s a stunning creation that combines elegance and awesome engineering that is as close as you can get to driving a F1 car on the public roads. Built with no windscreen and no bodywork you sense that the Atom is a real drivers’ car and as you hurtle around the track you can see every finely tuned piece of mechanics at work from the steering to the brakes.

With a 325bhp supercharged 2.0 litre Honda VTEC engine hiding just behind your seat you will love the feeling of acceleration perfect handling and all out speed as you take to the track for your four driving laps. Top Gear’s Jeremy Clarkson described his Ariel Atom drive as ‘driving nirvana’ and ‘off the scale of excitement’ we think you’ll love it too… Ariel Atom experiences are also available in other areas. Another popular and amazing gift idea from IntotheBlue please visit our gift experiences section for some great inspirational ideas for all the family. 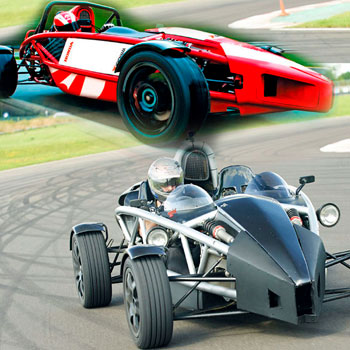 Battle of the Atoms

Why split the Atoms when you can drive both on this Battle of the Atoms! It’s road car vs race car on this double Ariel Atom challenge. You’ll be driving one after the other to see which version of this supercharged pocket-rocket you prefer (don’t worry you’re allowed to love both!).

Let’s see if you can handle the power of the Atom. The road going Atom boasts impressive statistics. It might ‘only’ have 325bhp but it’s incredible power to weight ratio means this supercharged Atom goes off like a bullet from traffic lights reaching 60mph from standing in just 2.8 seconds. That’s fast.

The race going Atom pushes the envelope of driving even further. It has a full roll cage the motorsport spec fuel tank and has been upgraded and tweaked all over to be race worthy. The kerb weight stays the same (just 550kg) so what does all that mean for the performance? You’ll find out for yourself during your Battle of the Atoms but expect an even more responsive steering a stiffer ride and less understeer in this rear wheel drive beast.

Whilst the road going model of the Atom was already pretty bonkers the race car version take the craziness to an even higher level. The car was developed to be raced in the single series Ariel Atom Cup. Can you imagine 20 Atom Cups all battling it out on the circuit at once? Madness.

Both Atoms are a real challenge to master even on an empty track. You’ll need your wits about you as you literally fly out of the pit lane. The handling is awesome and made all the more exhilarating by the fact that you’re just inches off the floor. And when it comes to cornering? It’s just so ridiculous you won’t know whether to scream in fear or laugh in sheer delight.

We are offering two Battle of the Atoms experiences for you. You can pick the Blast which gives you three-miles of driving in each car or extend to the Thrill for six-miles of atomic Atom driving. And in both cases you’re treated to a passenger lap in a high-speed performance car too. 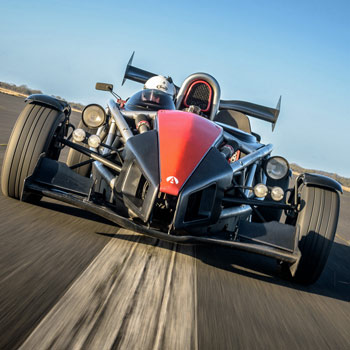 Get geared up to go ballistic with the brake horsepower on this Ariel Atom track experience! Just looking at this car will get your pulse racing. The Ariel Atom 2 car you’ll be driving is fast. Very fast. Let’s see if you’ve got what it takes to tame the Atom over the course of three or six laps.

Indeed this is one wild car. Yes you can cruise on the public roads fairly easily but let’s face it both you and the Atom will be itching to get out on the track. Experience that awesome acceleration the verging-on-ridiculous cornering and that sheer straight-line speed. And all whilst pulling that infamous Jeremy Clarkson ‘I am an alien’ face as the wind buffets you!

Before you even hit the track just sitting in the open cockpit of the Ariel Atom is quite an experience in itself. That enormous snorkel and air intake is right behind your head as is that spoiler of whale-tail proportions. In complete contrast the door mirrors are teeny and the mud guards? Well we don’t think they’d keep much spray off you in the rain.

What we love most about this experience is the fact that the voucher is valid for various track venues around the country. There are some cracking locations on the list with everything from MSA accredited tracks to venues that are not normally open to the public. Add in to that the fact that you’ll be in an Atom and we think it’s a combination that’s hard to resist.

The Ariel Atom 2 is most at home on the circuit so this is the best possible environment for you to test its amazing capabilities away from pesky traffic lights speed limits and the like. The flip side of the coin is that you’ll need to think about track craft so that you can carve out that smooth racing line to get anywhere near the lap times this motoring jewel is capable of.

A driver briefing before your drive will get you on the right track and there’ll be an experienced instructor alongside you in the Atom to give in-car tuition as you roll. All that remains for you to do is rip it up on your Ariel Atom track experience! 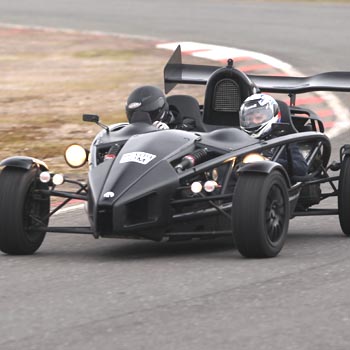 Get ready to go stratospheric on an Aerial Atom blast! It’s supercharged fun all the way in this unique car. As the maker Ariel says: ‘No roof no doors no compromise’ which pretty much rounds up what the Atom is all about. Time for you to try it.

You’ll be blasting off in a race-prepped Ariel Atom which amazingly is also road legal despite the lack of what you might call the usual modern motoring refinements and even some of the basic accessories too. For example the switch for the headlights is verging on comical when you try to go from dipped to full beam and the lights themselves pretty much only serve to illuminate your feet. And if the optional windshield is fitted it’s by no means going to stop the breeze which comes in from the side and the front of Atom.

So what makes the supercharged world of the Atom so special? Well until you’ve experienced one for yourself it’s difficult to describe simply because there is no other car out there like it. It’s more like a go-kart for the street than a convertible and even the elementary task of getting in an out of the car can be a bit of a palaver but luckily the removable steering wheel helps!

Indeed once ensconced snug as a bug in a rug inside the cockpit you aren’t just a driver of this car you are this car. The driver/car relationship is just so fusional when you’re strapped in low and can see tarmac all around you thanks to that distinctive exoskeletal frame.

And the feedback in the Atom is incredible. As you blast around the track you will feel every bump every camber every tiny morsel of gravel you roll over in this Aerial’s iconic car. And as the company continues to produce lighter and faster versions of this little trooper life as a supercharged Atom just gets better and better.

We are offering Ariel Atom blasts at a range of race tracks around the UK and our teeny racer is dying to meet you. Isn’t it time you clambered in somewhat unceremoniously pressed the start button and hit the tarmac in this torque-loving road and track beast? 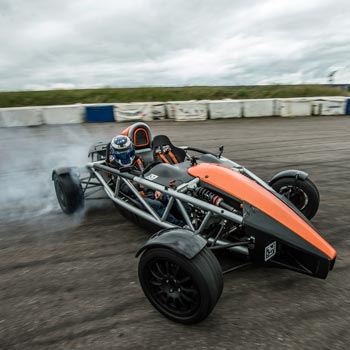 What could be better than cruising the road in a sports car – hitting the fast straights on an Ariel Atom track day that’s what! The standard version of this car is perfectly road legal but the little monster comes totally into its own out on the circuit. Do you have what it takes to tame the Ariel Atom?

Motoring journalists and pundits can wax lyrical about the prowess of the Ariel Atom on the track all day long but we’d just like to point out some pitfalls of the car. It’s no good in bad weather as there’s no roof. There’s no room for any bags so forget even bringing back a takeaway in this car. There’s not even a stereo mind you hearing anything over the sound of the engine that’s just behind your right shoulder is impossible anyway.

But hey the noise of the car is all the music to your ears that you’ll need and this isn’t a vehicle for pottering around town in (unless you want to just show it off). Get this Aerial Atom out on the circuit and you will instantly know what this car is all about and why the aficionados absolutely love it.

It might the most ‘barely there’ vehicle going with its exoskeletal body but you can’t miss the Atom on the track and you could spend all day watching it. But you’re not here just to admire it from the sidelines you’re here to drive the thing! You have the chance to leap straight into the driver’s seat (complete with four point racing harness) and go driving for four delectable laps at your choice from seven circuits offered around the country.

In total that’s around six miles of driving per person on these experience days. This is where the bodiless form of Ariel’s Atom comes into it’s own to become the purest rawest form of fun on tarmac ever. So grab that 300mm race suede steering wheel drop the hydraulic clutch slip it into gear on the close-ratio box and boot it out of the pits.

It’s almost like this team of clever automotive engineers has re-invented the wheel and made it lighter faster and more fun than ever. In this case A is for awesome amazing and Ariel Atom all wrapped in one very very speedy package. With your foot firmly to the floor (there are no carpets after all!) we are sure you will be utterly seduced by this incredible car on your Ariel Atom track day then as a finale one of the pro drivers will take you our in a performance saloon on the circuit for a lap with you as the passenger.