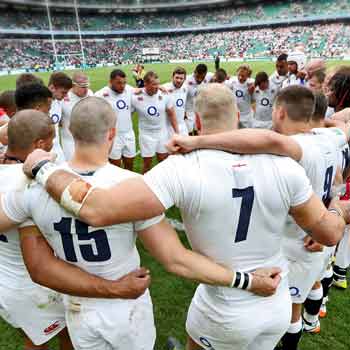 Visit the Home of England Rugby on these Twickenham stadium tours! The very first match held on this famous site was in 1909 and it was a local derby between Harlequins and Richmond. Since then the stadium at Twickenham has grown to be the largest venue dedicated to rugby in the world – and it makes for an impressive tour with free access to the World Rugby Museum included too.

Visits to the stadium are guided by hosts who are passionate about rugby and highly knowledgeable about Twickenham through the ages too. Your tour will see you visiting ‘back stage’ areas that are normally closed to the public. You’ll find yourself going through doors that are most definitely out of bounds for most of us on match days so you can have a really good nosey.

Imagine what the pre-match build-up must be like in the player dressing rooms or what it’d be like watching the game from the Royal Box or one of the hospitality suites. This is all truly the stuff of great rugby stadium tours!

The highlight of this Twickenham stadium tour has to be running down the player’s tunnel just like hundreds of rugby internationals have done at the start of a game. The atmosphere the tension the apprehension and expectation as the crowd is singing and the team runs out onto the pitch. Then you follow in their studded footsteps and take a pitch side walk to get close to that finely manicured turf that has seen more International tries penalties and drop kicks than any other pitch.

In the new World Rugby Museum follow the history of the game from its origins in Rugby School to the present day. Explore a glittering array of trophies including the Calcutta Cup made from 270 silver rupees; take up the challenge of discovering “What Kind of Rugby Player Are You?” in the Play Rugby Zone and re-live some of rugby’s most memorable moments with film and video footage 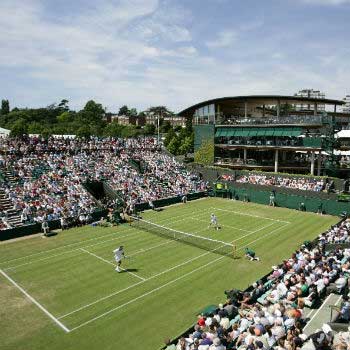 Go behind the scenes of the All England Lawn Tennis and Croquet Club on these fabulous Wimbledon Tours! Who can forget the moment Andy Murray became the first Briton since Fred Perry in 1936 to win the men’s singles title in the summer of 2013 – and with us all going tennis-crazy a tour of these famous Wimbledon courts is a must for any tennis fan.

The walking tour of Wimbledon will take you around the peripheral courts and the picnic terraces before you head inside to take a look at what it’s like to face the world’s press to answer questions on your serve backhand and form during the match you’ve just played. You’ll also follow in the tennis-shoed footsteps Wimbledon stars like Federer and Nadal as you tour the private facilities in the Millennium Building that are normally player access only.

Back outside and the tours continue to Wimbledon’s No1 Court where many a hard-fought game of singles or doubles has been played out in front of a full capacity crowd. You will then enter the inner sanctum of England’s most prestigious club – Centre Court. Amazingly you’ll learn that these two courts are only used during the Championships and how it’s now the only Grand Slam competition to be played on grass.

As you’re being shown round on these wonderful tours you’ll hear lots of facts figures and stories from how many strawberries are eaten during the Wimbledon fortnight and that if a pony roller used to maintain the grass hadn’t broken there may never have been a Wimbledon Championships!

Once the hosted part of tour is over your Wimbledon experience continues with a visit to the interactive multimedia museum. Here you can discover the history of the club gaze wide-eyed at the sparkling winner’s trophies and even watch a virtual John McEnroe take your through his memories of being the ‘bad boy’ of tennis at Wimbledon. 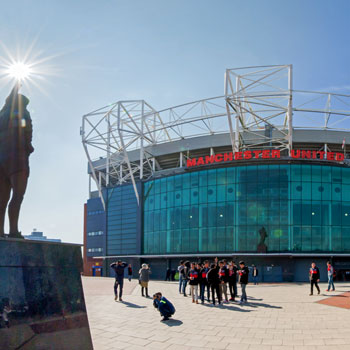 Walk in the footsteps of greatness on a Stadium Tour of Old Trafford! The world famous Theatre of Dreams is home to Manchester United as well as the greatest football story ever told. From humble beginnings as Newton Heath LYR in 1878 to the most successful football team of all time the story of Manchester United is one of passion excitement and incredible football.

The Museum & Stadium Tour gives you the chance to get closer to greatness and immerse yourself in the history and passion of the Red Devils for an entire year with an Annual Pass so you can visit as many times as you like. With the Old Trafford Experience you can enhance your experience at the Museum & Stadium Tour and enjoy a delicious meal and drink in the Red Café.

When it comes to the importance of Manchester United’s stadium the facts say it all. One of the largest home stadiums in Europe Old Trafford has been home to the Reds since 1910 and was almost completely destroyed during the Second World War. The only part of the stadium that survived the bombing was the original player’s tunnel which you can walk through on a Stadium Tour.

The Museum is located in the Sir Alex Ferguson Stand formerly the North Stand and is split over three levels to display over 2 500 objects. From the unrivalled silverware in the trophy room to the iconic kits through the decades to the managers that made their mark on the club the Museum tells the greatest football story ever told.

For your Stadium Tour of Old Trafford a Tour Guide will talk you through the history with interesting stories and untold anecdotes to bring the stadium to life. Your Tour Guide will be able to answer any questions you might have and will be sure to point out

As well as seeing the newly refurbished home dressing room and finding your favourite player’s seat you’ll be able to walk along that famous players tunnel towards the hallowed turf made famous by so many greats that have walked there before. Imagine how each and every United player must feel when they can hear the anticipation and expectancy in the roars from the crowd?

Whether you’re a Reds fan or not no-one can deny that this team has touched the hearts of so many. So much drama and history both on and off the pitch has made this club one of the best-known in the world. Book an Old Trafford tour now and see behind the scenes at Manchester United’s magnificent stadium. 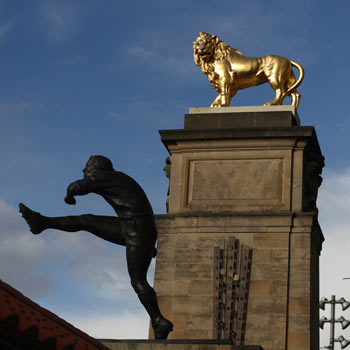 Immerse yourself in the spirit of rugby at the brand new Twickenham Rugby Museum! These tickets give you direct access to the fascinating Twickenham World Rugby Museum which is in the heart of Twickenham Stadium’s South stand – the home of English rugby.

The museum dedicated to all things rugby takes you on a journey through the ages explaining everything Rugby Union. You’ll see how the game started and whether the story that William Webb Ellis was behind it is the stuff of legends or the truth. Then as you move through the years you’ll find out how the game has grown into an international sport loved by millions. And you’ll see how things like the rugby balls and the shirts the players wear have evolved over the years.

A highlight for many who visit the World Rugby Museum is seeing the wonderfully ornate Calcutta Cup. Coming from the Indian Subcontinent to England it’s the trophy that’s awarded to the winners of the match between England and Scotland. The full history behind it is pretty enchanting and well worth a read.

As well as hundreds of incredible artefacts (the Twickenham museum has the world’s most comprehensive collection of rugby memorabilia) there are lots of interactive exhibits too. Feel the force of a scrum take a virtual reality conversion kick and test your endurance as a rugby playing athlete. It’s all brilliantly hands-on at this rugby museum!

Of course no visit to any museum would be complete without exiting through the gift shop. The Twickenham rugby museum store is a veritable Aladdin’s cave for rugby fans with everything and anything related to rugby. All in all a superb day out dedicated to all things rugby. And remember 80 minutes two teams 30 players and one game…this is rugby.

If you know someone who would love to have a wander around the World of Rugby Museum and see behind the scenes we also have the Twickenham Stadium Tour and Museum package on sale too.