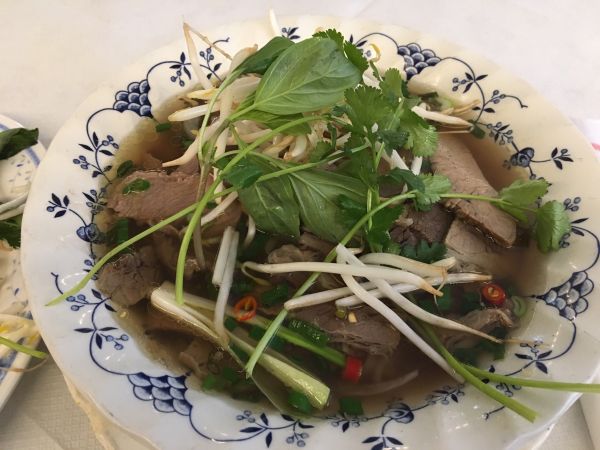 South-East London has quite a large Vietnamese population, and as a result, has more than its fair share of Vietnamese restaurants. One of our go-to’s on a weekend lunchtime is Café East – a large, utilitarian dining room housed in an ex-pub on the edge of a carpark that serves a nearby leisure complex. Here you’ll find hordes of East Asian (and quite a few non-Asian) families tucking into steaming bowls of pho and other Vietnamese classic dishes.

What I think sets Café East apart from the competition is the depth of the pho broth, which is boiled for many hours and the subtle cinnamon and star anise notes add a pleasant warmth. The helping of fresh bean sprouts, chili, lime and aromatics on the side is more generous than most other places. Also recommended is the BBQ pork vermicelli served with tangy sweet pickles and salad – mix it all up and enjoy.

Service is brisk and turnover of customers is high, meaning you most likely will need to queue but not for too long. As such, it’s not really a place to linger.

The Harry Potter Studio Tour is continually changing and updating to make sure they have a steady stream of repeat visitors. Today, they’ve announced that they’ll be opening up Gringotts Bank to visitors.

From the press release:

For the first time ever at Warner Bros. Studio Tour London – The Making of Harry Potter, visitors are invited to enter the set of Gringotts Wizarding Bank as the Studio Tour unveils its biggest expansion to date.

From Harry Potter first discovering Diagon Alley to the famous trio escaping on a Ukrainian Ironbelly dragon in their quest for a Horcrux, Gringotts Wizarding Bank played an important role in the Harry Potter film series. On 6th April, Warner Bros. Studio Tour London will unveil a permanent addition allowing visitors to walk through the wizarding bank of Gringotts, the Lestrange vault, a gallery of goblins and so much more.

Lined by towering marble pillars, the grand banking hall will be decorated with three magnificent crystal chandeliers and finished with real brass leaf. Inkwells, quills, ledgers and piles of Galleons, Sickles and Knuts will complete the goblin tellers’ desks as seen on screen. The Prop-making Department, led by Pierre Bohanna, created over 210,000 coins for the final two films alone.

Gringotts Wizarding Bank is famously run by goblins. Walking through the imposing marble columns, visitors will discover the costumes and prosthetics belonging to Bogrod, Griphook and many other goblin bankers. Each prosthetic mask took weeks to create, with every hair individually inserted and veins painstakingly painted by hand. It took four hours to transform actor Warwick Davis into Griphook in the films which included him wearing black contact lenses and dentures with extremely sharp teeth to complete the goblin look.

Once through the banking hall of Gringotts, visitors will enter the depths of the Lestrange vault used to store the treasures of Bellatrix Lestrange including the Sword of Gryffindor and Helga Hufflepuff’s Cup, one of Voldemort’s many Horcruxes. During filming 38,000 pieces of rubberised treasure were created the for the Lestrange vault including 7,014 Hufflepuff Cups. Here, visitors can try out a unique photo opportunity allowing them to step inside the Lestrange vault and surround themselves with treasure.

Tickets are on sale now (and booking ahead is essential when visiting here as it has limited spaces every day and it fills up quickly). It will officially open on Saturday 6th April, the 16,500sqft Gringotts Wizarding Bank expansion will be the Studio Tour’s biggest addition to date and has been designed and built by many of the original crew members who worked on the hugely successful film series. There will also be an all-new 17,000sq ft lobby and café opening on the 6th April. The new café will serve food and drink inspired by the Wizarding World and can seat up to 500 people.

I haven’t visited since 2013, so this new attraction combined with several other new additions since I visited makes me think it’s high time I visited again the next time we’re in England. 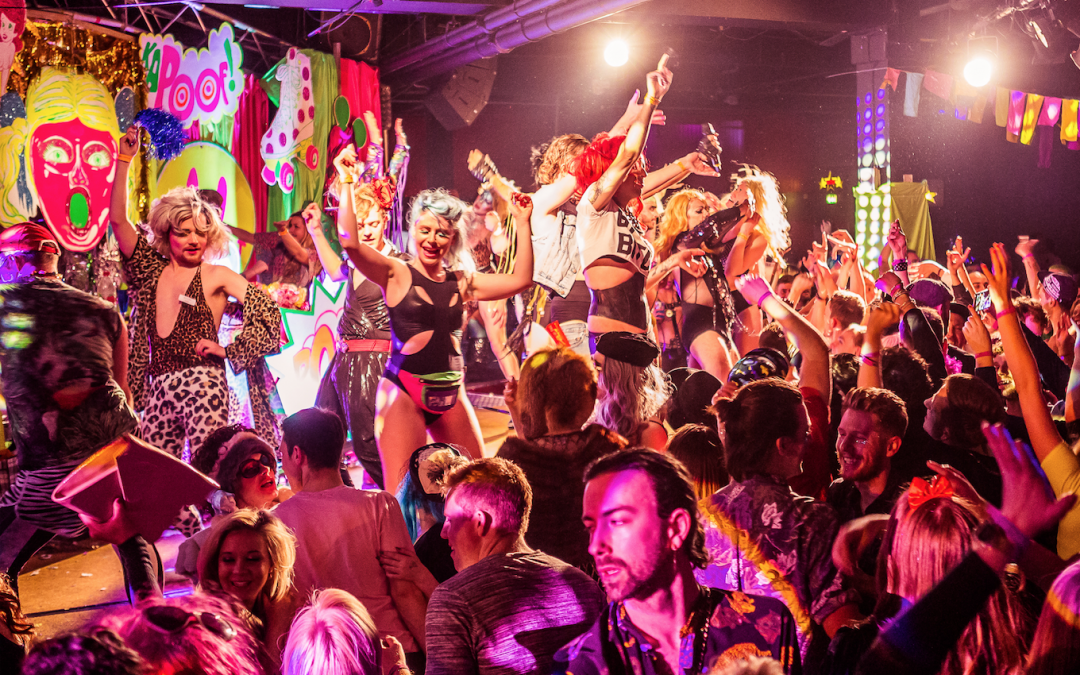 Now in its third year, Mighty Hoopla has firmly established itself as London’s biggest pure pop festival – it’s kind of a cool, modern take on Party in the Park (RIP), but with an added dash of LGBT+ fabulousness.

The first batch of acts for this year’s event has just been announced, and it’s not exactly lacking in bangers. Legendary girlbands All Saints and Bananarama will wow the crowds at Brockwell Park on June 8, joined by Liberty X, Samantha Mumba, Jamelia and cult Swedish pop artist Tove Lo. Even more acts, including the headliner, will be announced in the coming weeks.

But as ever, these time-honoured pop icons are only part of Mighty Hoopla’s glittery, anything-goes package. This year’s event will also welcome an array of top club nights and venues including Sink the Pink, Guilty Pleasures, Massaoke, The Cocoa Butter Club, Hungama, We Love Pop, Pluma, U OK Hun?, The Chateau and The Grand.

Although Mighty Hoopla is returning to south London’s Brockwell Park for a second consecutive year (subject to licence), it’s worth noting that this year’s festival takes place on a Saturday rather than a Sunday for the first time. So, just as Liberty X will command, you’ll be able to let go just a little bit more…

Mighty Hoopla is at Brockwell Park on June 8. Tickets are available from www.mightyhoopla.com. 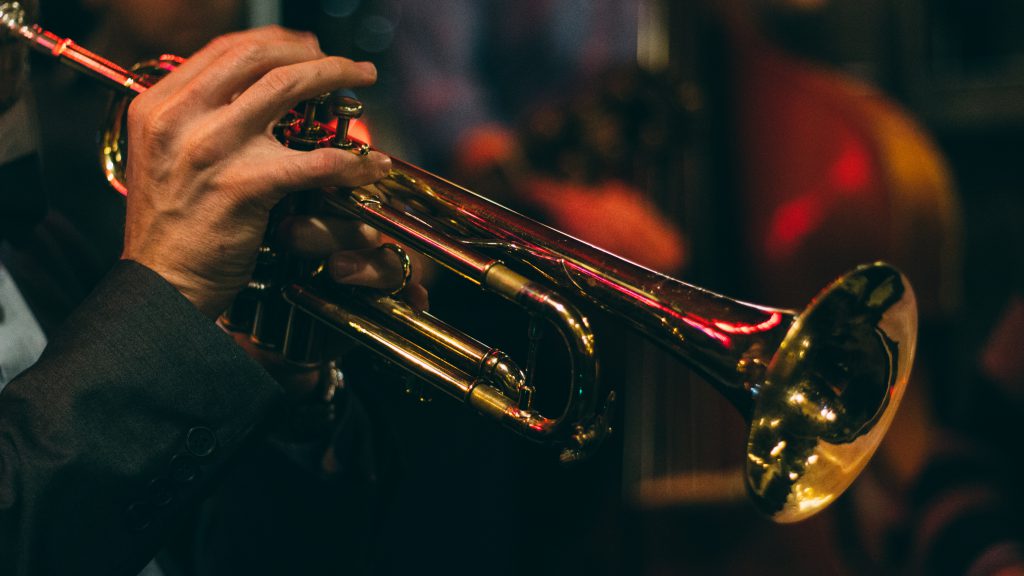 A Guide to Live Jazz Music in London

London Soho is home to a countless number of top quality live music venues. It’s hard to believe that this lively and bustling area stretches for a little over a square mile. With so much packed into a small space in Soho, it sometimes can be best to wander around and see where you end up. However, here are some must-visit live jazz music spots you shouldn’t miss!

Starting with Ronnie Scotts Jazz Club, this world-famous Jazz club is busy and thriving nearly every night of the week. On top of having an amazing atmosphere full of Jazz enthusiasts, the club has also hosted some of the biggest names in Jazz including Wynton Marsalis, Cassandra Wilson and Kurt Elling. Ronnie Scott’s has also been known to feature up and coming musicians who are said to be the next big thing. So if discovering new talent is what you want then this Soho hotspot is where you need to be.

You will need to book tickets in advance of your visit to Ronnie Scotts and with this booking, you will be allocated seats so no need to worry about struggling to get comfy! Once inside they have a delicious food and drinks menu and table service the whole way throughout the show. You’ll be well looked after during your visit to one of the oldest Jazz venues in the world!

Ronnie Scotts is open seven days a week, Monday-Saturday from 6pm-3am and Sundays at 6:30 pm until 12 midnight.

You can check out their jam-packed upcoming schedule here.

Next on our list is the award-winning live music and comedy venue, Hideaway. Not only does this venue have amazing live music but they also serve to-die-for food from their seasonal menu. This laid-back club is definitely the perfect environment to experience new Jazz artists or one of your longtime favourites.

If you want to get in deeper and experience what its like to perform in a jazz band first hand, they also offer a weekly jazz workshop for all levels. These workshops focus on learning how to play and phrase the melodies and how to tackle improvising over the changes. Vocalists are welcome to attend so if it’s been your dream to perform in a jazz club then Hideaway has you covered.

Check out their upcoming calendar here.

If whiskey is your drink of choice and jazz your music of choice, then Boisdale is the spot for you. Their whiskey bar, located on the second floor in their restaurant, is a 12-meter long glowing amber wall of liquid gold and holds over 1,000 bottles of malt whiskey and is undoubtedly one of the most magnificent whiskey bars in the world.

Boisdale also offers an experience of a lifetime where fantastic dining is matched with the very best in live entertainment. Boisdale’s superb British menu is met with an even better live performance of the very best in soul and jazz.

Boisdale is open 7 days a week at varying times.

You can learn more about their upcoming acts here.

If a quirky and delicious cocktail is your drink of choice while enjoying live jazz then the Nightjar should be top of your list. Their cocktail menu is not only extensive but also extremely creative. From the ‘Alchemists Brew’ drink, a whiskey and pineapple cocktail, to the ‘Hug a Wild Cat’ which includes tequila and kumquat, they have a drink to suit every taste bud.

Their beautiful decor paired with an incredible cocktail menu should be enough for a memorable night out but on top of this, they offer a delicious tapas menu until 11.30 pm.

They also have live Jazz acts every night until the end of November. To pick the perfect night for you check out their calendar here.

Last but not least on our list is Oriole. This speakeasy-themed cocktail and live jazz bar is an oasis of peace from the madness of the capital. With exceptional hospitality and an amazing drinks and food menu alike, this bar is what you need for a wonderful night of escape and jazz. Their live music ranges from early Jazz of New Orleans’ red district and early international Swing Jazz to Brazilian Jazz to 50’s Rhythm and Blues so you will be spoilt for choice at Oriole.

To check out their Jazz schedule until the end of November click the link here.

Although your evenings will be jam-packed experiencing London’s Live Jazz Music venues, it’s always a good idea to line your stomach before a night of fun. Why not try out one of the many London food tours from Eating Europe? Choose from our East End Food tour,  our Twilight Soho Food Tour or our London Old Docks – Historic Pub Tour.

The post A Guide to Live Jazz Music in London appeared first on Eating Europe.