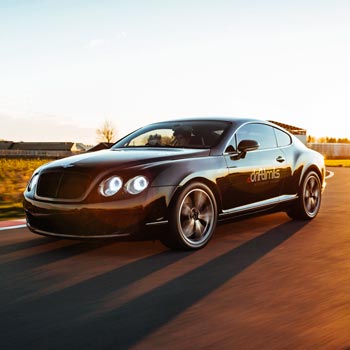 The Bentley GT is a Grand Tourer with a capital G and a capital T. This is a comfy limousine-style four seater cruiser that’s ideal for chauffeuring VIPs around. But that’s only half the story. Drive the Bentley and you’ll realise that this GT has serious racing credentials as well.

Who’d have thought the Bentley GT designed engineered and built in Crewe could have such an incredible international reputation? It’s slick sleek and the car of choice for rich-folk around the world who want to drive or be driven in comfort and style but with all the stats to match. This is a 600bhp coupe that packs a serious punch for such a large car.

Inside it’s as luxurious as you’d hope. This is a car that comes with a whole palette of colours to choose from for your leather interior. With names like ‘Beluga’ Saffron’ ‘Nautic’ and ‘Burr Oak’ you just know the British-built Bentley is in a different league.

Of course the modern day Bentley GT under the guidance of parent company Volkswagen is no-longer the handcrafted vehicle it used to be but the marque has undoubtedly increased its following and gained many new fans thanks to exquisite detail and superb handling.

You’ll discover all this for yourself when you take the Bentley GT out on this experience. You will be at the helm of this deluxe motor for ten divine laps of the airfield circuit at Bovingdon. This car feels mature solid and rather lavish. But it also like to let its hair down on the track (after all this car features as an official parade car at the Nurburgring 24 hour race and the Continental GT3 is a pure race car).

Boasting four wheel drive with torque vectoring to make sure the correct amount of drive needed goes to each wheel at any given moment this GT sticks to the road really really well. With the latest twin-clutch technology the eight-speed self-shifting transmission is pretty nifty too. We think you’ll love it as much as this Bentley GT loves being driven ‘properly’ rather than cruising from hotel to hotel laden with shopping and VIPs! 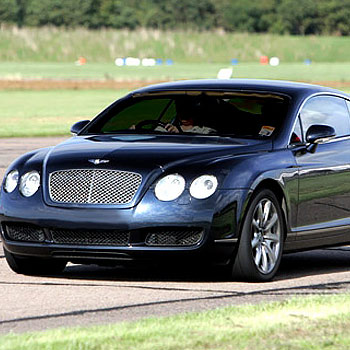 The rich and famous might cruise along the highways in their Bentley Continental GT cars but you will be driving the Bentley Continental GT on the track making it much more fun. No speed limits no average speed cameras and no traffic cops. The only problem is of course that you have to give it back after your go.

In the not too distant past Bentleys were known for being large elegant and rather stately motor vehicles. Since Volkswagen got involved things have changed but in the good way as most motoring aficionados would agree. Those huge expensive status symbols are still there but the marque has attracted a new hipper and cooler clientel with the Continental GT.

Jay-Z sings about them loads of rappers have the GT as their main whip and Paris Hilton has a fully customised pink one complete with diamond encrusted dashboard. OK that last one might be pushing the limits of cool but in essence if you drive a Bentley you’re rich and you want everyone on the road to know it.

Your standard Continental GT starts at around £140 000 and that’s before all your dazzling and stylised extras. Whilst these vehicles are not known as sports cars they do get out on the track and compete in race series such as Le Mans and a Continental GT actually holds the world ice speed record set by Finnish WRC champ Juha Kankkunen in his personal GT.

Quite amazing for a car that weighs in at over 2.5 tonnes the V12 version you’ll be driving today on the track will do 0-60mph in around 4.7 seconds and can nudge a 200mph top speed. Again not bad for a car whose reputation is more about the elegance and supreme comfort of the ride rather than the power stats.

This experience will see you driving the Bentley Continental GT for either three or six miles around a professional-standard tarmac race track. With enough straight to get the rev counter jumping as you hit that tiptronic transmission and an ample numbers of corners to test that all wheel drive handling we think you’ll agree that actually being at the wheel of one on the track is way better than singing about them or coasting along Rodeo Drive at a snail’s pace.