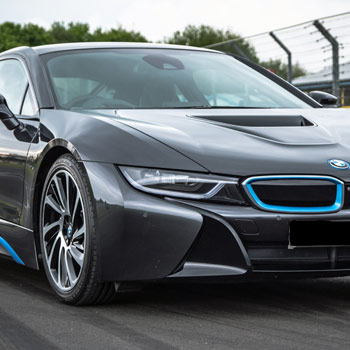 Fancy driving the i8? This is BMW’s fancy pants electric sports car and it’s coming to a race track near you! These experiences at a selection of race circuits around the country give you the chance to feel all that electric power under your feet.

You know how concept cars usually bear no resemblance to the actual production car? In this case the BMW i8 coupe is as delightfully futuristic looking in the flesh as it was back in 2008 when the idea of a plug-in hybrid high performance BMW was first introduced to the world.

Back then you’d have probably said: “It looks great but it’ll never catch on”. And now look at us. From plug-in city cars to Formula E racing electrified motoring is everywhere. The i8 neatly shows us that eco-responsible doesn’t mean boring as you’ll find out when you get to take the impressive i8 for a spin.

Funky butterfly doors open to reveal a typically neat precise and gadget-filled cockpit. This car certainly has style leaning on the sporty heritage of BMW. Slide into that low-slung racing-inspired seat and listen carefully to the in-car briefing from your instructor sitting beside you in the passenger seat.

When you’re ready it’s your moment. Just remember being electric the acceleration on this car is nifty to say the least. No turbo lag no waiting for the injection of fuel. Foot down on the accelerator and you’re off big time!

We think you’ll agree the i8 is a true delight to drive. Lively sharp handling and undeniably quick it really does feel like the sports car of the future right here for real right now. And in case you’re wondering yes it does lack the throaty roar of a V8 engine but those Bavarian boffins even came up with a clever solution for that too…

Book a session in a BMW i8 coupe and find out for yourself what all the fuss over this electric sports car from BMW is about then round it all off with a hotlap in a high performance saloon. Perfect for (hybrid) petrol-heads everywhere! 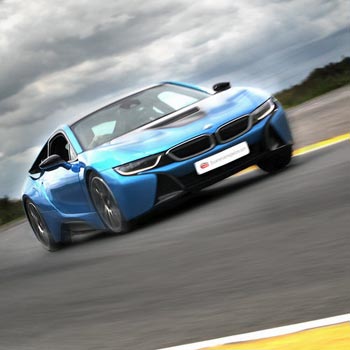 Your BMWi8 driving thrill is going to be thoroughly electrifying! These very unique super driving experiences available at North Weald Llandow and Blyton Park will see you driving BMW’s big plug-in hybrid car the i8. This is your chance to taste the future of motoring.

Indeed electric cars of tomorrow are right here right now. They’re making a serious impression on the tracks at the likes of North Weald in Essex Blyton in Lincolnshire and Llandow race circuit in South Wales. And not only that these Lithium-powered cars are actually giving quite a few supercars a run for their money. Could this spell the end of the traditional internal combustion engine we’ve known for decades?

Well yes and no. As well as the onboard battery this car actually has an engine. And this gives you the best of both worlds as you’ll find out when you get behind the BMWi8 on your driving thrill. If you’ve never driven an electric car before we can bet that you’ll be impressed by the acceleration. Many of us think an electric car will be slow and sluggish. But far from it.

Think back to the last time you drove a Dodgem. As soon as you put your foot down you’re off maximum ‘speed’ from the word go as you lurch off. And although it’s simplistic (apologies to BMW i8 boffins) it’s kind of how an electric car works. In a normal car engine the mix of fuel air and spark builds up gradually to build up torque gradually. In an electric car it’s all about electromotive force. You hit the throttle fully and you’ve got maximum voltage instantly and therefore maximum torque straight away.

That’s why when you accelerate in the BMWi8 it goes straight away. And very quickly at that. You’ll hit 0-60mph on the likes of the North Weald circuit in around 4.4 seconds. Impressive isn’t it? Erase the image of little city cars pootling around on a full charge this is fully-charged electric motoring with some serious spark as you’ll find out on your three or six lap BMWi8 driving thrill. 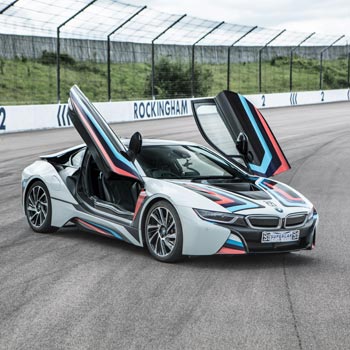 Take the BMW i8 for a blast and get a taste of the future of motoring! This incredible new hybrid car from BMW sets the standard for ‘green’ driving into the next decade even though it looks nothing like what you might think an environmentally-friendly would be like…

Let’s face it you wouldn’t think the words hybrid and BMW would ever be seen together but since showing off the concept car in 2009 the i8 has grown into a full production car that unsurprisingly won Car Design of the Year in 2014 when it was unleashed onto the public.

One thing’s for sure as soon as we clapped eyes on the i8 we realised that BMW had completely blown the image of electric cars being small and just a little bit eccentric out of the water. The BMW i8 is most definitely a pioneering member of the saintly supercar category.

So it looks the part but how does the i8 drive? Well it is surprisingly agile and thanks to be four wheel drive (the electric motors driving the front two the petrol one driving the rear) it has superb handling too. But there’s a definite trick to getting the most out of this car…

BMW has come up with three driving modes for the i8. Electric mode gives you a range of about 20miles using solely your lithium-ion battery pack. Comfort mode is ideal for motorway cruising and uses both but it doesn’t recharge the batteries. However select sport mode and not only do you get a hybrid car that drives like many a petrol-only supercar you get one that charges the onboard battery pack at the same time!

So the harder you drive the more it charges and as a certain Clarkson quipped: “If you get booked for speeding you get a thank you note from Greenpeace” so you can drive like a you’re on the Monte Carlo rally without any fossil-bruning fuel guilt. Result!

These sessions in the BMW i8 are a blast. You’ll be able to take this amazing car out for a serious drive on a circuit where you will be able to put that intriguing sport mode to the test for yourself. We have to agree with BMW – the i8 really is a vision of the future in one very fancy hybrid supercar. If you want to pitch electric against turbo power try our BMW i8 vs Mclaren MP4 -12C experience!

What makes a BMW i8 drive so different to all the other sports car experiences we have on offer? Well to put it simply the i8 is an electric car. But make no mistake this is not a teeny car that pootles around to the supermarket this is an eco-car that has serious sports car looks!

Undoubtedly BMW has pushed the technology boat well and truly out with the i8. Originally appearing on the scene as the Vision Efficient Dynamics’ concept car no-one thought the actual production version would bear any resemblance to that crazy design but we’re delighted to say this road going green car does indeed look incredibly futuristic right down to the amazing butterfly-opening doors. And just look at those seemingly ‘floating’ rear panels. Nice.

And if you’ve seen the film  Mission Impossible IV: Ghost Protocol you’ll know just how cool this BMW looks at night. As hero Ethan Hunt played by Tom Cruise cruises the streets of Mumbai in his newly acquired BMW i8 he is most definitely upstaged by those highly-efficient laser headlights.

Start up the i8 and you might be surprised by the engine noise. That’s because it’s actually a hybrid with three powertrains. There’s the 129bhp electric motor driving the front wheels the second electric motor that acts as a booster/generator and a three cylinder 227bhp turbo engine driving the rear wheels (that’s where the throaty singing comes from!). All that combines to offer 135mpg and an electric-only range of 22 miles.

Of course you’ll be impressed by the designer good looks of the i8 but we think you’ll also be pleasantly surprised by the performance when you drive it. OK it’s no M series BMW but it does accelerate very well in Sport Mode and you’ll go from a standing start to 60mph in around 4.2 seconds mostly thanks to the carbon fibre body that keeps the overall weight down despite the batteries and engine.

This experience gives you the chance to drive one of these sought-after i8s (BMW has a 10 month waiting list in the UK for them) around a proper race track for three or six glorious eco-friendly (ish) miles. Take the BMW i8 for a drive and discover the world’s funkiest hybrid sports car that looks like a gas-guzzler but is actually exempt from the London Congestion Charge! 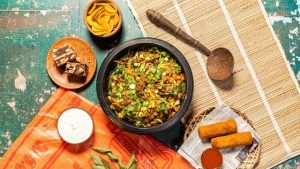 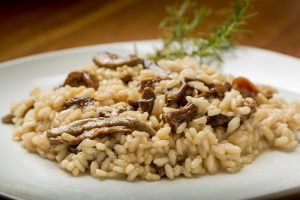 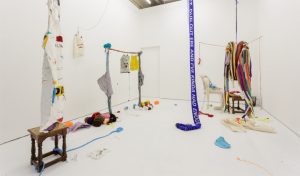