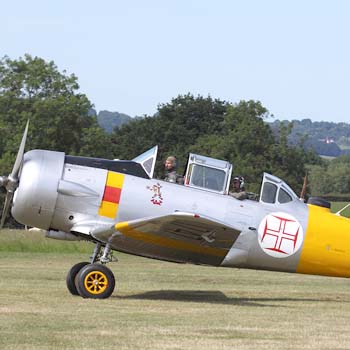 Zoom through the skies over Epping on these Harvard lessons from North Weald Airfield! Experience war bird flying at its best with this full range of flight durations for Harvard flights out of historic North Weald.

Whether you know it as the Harvard or the North American T-6 there’s no denying this plane is a legend. For many many years the Harvard was used as the main second-level trainer plane by air forces around the world. Being a low-wing monoplane it would have been quite a big step up from flying biplanes like the Tiger Moth.

Aspiring fighter pilots couldn’t wait to get their hands on the Harvard. Way more powerful than anything they would have previously flown during training so far it was a real baptism of fire for these young pilots to see if they could handle the Harvard. Those who did often went on to become bonafide fighter pilots now it’s your turn to see if you can earn your stripes!

The Harvard you will be flying in for your lesson at North Weald Airfield was built in 1943. After various missions the plane was sent as part of a 10-plane consignment to serve with the Haitian Air Force. It’s believed this particular Harvard is the only one to have survived when she was returned to the USA in 1982.

Eventually arriving in the UK in 1989 the Harvard was re-registered as G-DDMV. She was fully restored by the current owners when she was purchased in 2015 and this delightful plane now flies resplendent in her yellow training colours over the skies of Epping and north Essex.

We are offering 15 20 40 and 60-minute Harvard flights out of North Weald. Each one gives you enough time to savour the sheer energy acceleration and power of this impressive plane. And being a lesson you’ll even time to have a go at the controls so you will actually be flying this lovely Harvard yourself for a short while. Make sure you wave to your friends and family waiting back at the North Weald base as you soar past in your Harvard! 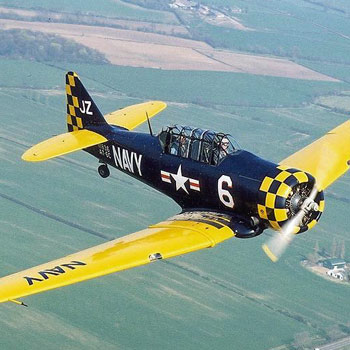 Thrilling Harvard flights over the Essex skies! This is your chance to climb aboard a vintage Harvard and fly out of Earls Colne airfield near Colchester for a truly exhilarating warbird experience that is sure to take your breath away.

This Harvard is a genuine World War Two veteran. Having been built in Dallas Texas in 1942 this Texan trainer first served with the US Air Force. She was then down to be transferred to the RAF as a Harvard IIA but somehow ended up being amongst a shipment of 436 aircraft destined for the South African Air Force. And that’s where she stayed working as a fighter trainer until 1969. This time she was sent to serve with the Portuguese Air Force until 1978 when she was decommissioned.

By 1979 this well-travelled plane had reached British shores where she was re-registered as G-TSIX (nice choice!). Passing through various ownerships G-TSIX has been a regular feature at fly-ins fly pasts and air shows for many years resplendent in her US Navy Trainer colours.

Now settled at Earls Colne airfield just outside Colchester this delightful Harvard flies vintage aviation enthusiasts in the skies above Essex on these fabulous flights. We have selected a range of experiences – all of which include a comprehensive 30-minute pre-flight briefing and plenty of time to get to know this wonderful aircraft.

You’ll be kitted out in a full RAF-style flying suit for your Harvard flight. Your pilot in Earls Colne will be Nigel Willson the flying school’s chief pilot. He is massively experienced when it comes to flying these magnificent warbirds and is an accomplished display pilot and organiser. And in fact we are offering a taste of those display pilot skills with an aerobatics add-on to give the standard 20-minute flight that extra G-force thrill!

As well as the full-range of single flight durations we also offer the rather special Duxford day out. This is a landaway experience where you’ll take off from Earls Colne in the Harvard fly across Essex to Duxford then explore the wonderful museum for a couple of hours before heading back in the Harvard to base for tea. All very civilised!

If you love your vintage aviation you will love these Harvard flights in Essex. Buy your voucher book your slot and get ready to fly in this genuine WW2 fighter trainer. 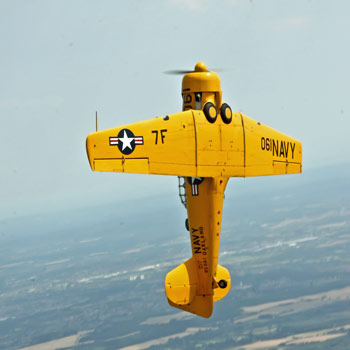 Experience the wonderful world of warbirds with these Harvard flights at White Waltham! This is your chance to take to the skies above Berkshire in a superlative example of these much-loved training aircraft from another era.

Whether you know it as the American T6 Texan or the Harvard (as it was called in the Commonwealth) this plane is pretty legendary. It served as a great war time trainer for young pilots who then went to on to fly fighter planes on daring missions. It’s an iconic warbird and anyone who’s into their classic aviation will want to fly in one.

No need to cross the Atlantic to fly in a Harvard though as this one is based in Berkshire. Operating out of White Waltham Airfield near Maidenhead is certainly befitting as the airfield was used as an Air Transport Auxiliary base during WW2 from whence aircraft were dispatched and delivered to the forces.

Today White Waltham is home to one of the largest flying clubs in the country. With excellent on-site facilities including a clubhouse pilot briefing rooms and a restaurant it’s a great place to visit. And even better when the reason for your visit is a ride in a Harvard!

And what a fascinating history this particular Harvard flying out of White Waltham boasts. She was built in 1944 as a AT6D Texan destined for the USAF but ended up being sent to the US Navy. She was seconded to the Japanese Marine Defence Force in 1954 before returning for a last stint with the US Navy until 1977 when she was decommissioned.

Following various civilian ownerships in North America this beautifully restored Harvard came to the UK in 2012. Flying as G-CHIA in her very sporting Californian Naval Air Station paint scheme the Pratt & Whitney-powered warbird is ready for take-off. She’s just waiting for you to climb onboard too!

We are offering thrilling Harvard flights out of White Waltham Airfield as 20 30 or 40-minute flights. If you’re up for it you might even be treated to some aerobatics moves as part of your flight experience! 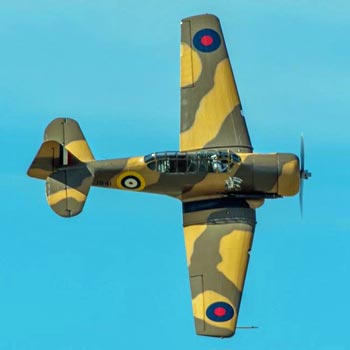 Fly in a Harvard Warbird

UK Harvard flights are go – the Wacky Wabbit is going on tour! This is your chance to book an introductory flight in a Harvard when this iconic military trainer flies during summer season. And you’ll be the one sitting up front!

This stunning Harvard was built as a T6J in 1953 at the Canadian Car & Factory Company. Commissioned by the USAF the Harvard you’ll be flying in was dispatched to Italy as part of the post-war initiative to rebuild Air Forces around Europe. Serving for many years as a military advanced training aircraft this plane served at various Italian bases.

After Italy this Harvard’s history is sketchy until the aircraft turned up back in the UK in 1981 with a civilian registration G-BJST. Since then the plane has lived under multiple ownerships until 2015 when this consortium took over and made some bold decisions. First up was a full and pain-staking restoration to bring this warbird back to prime airworthy condition. Then it was all about the livery…

The team decided on RAF Desert Air Force (DAF) colours just like a MkII Harvard serial number AJ841 which flew with the Desert Air Force between 1941 and 1946 training young fighter pilots during the North African campaign. It’s a pretty rare sight too believed to be the only Harvard in the UK and indeed Europe flying in authentic DAF colours.

Looking for a moniker for their newly resplendent Harvard the crew stumbled across the carrot-eating rabbit logo used by the British Flying Training School in Florida during the 1940s. Inspired by this piece of aviation history the Wacky Wabbit was born.

And now here he is flying the skies of the UK as the Wacky Wabbit offering flights to introduce you to the world of Harvard warbirds. These very special experiences are scheduled at Old Warden Airfield in Biggleswade and Conington Airfield in Peterborough – the aircraft’s home base.

The thrill of flying in such a prime example of a Harvard in the UK is evident. And to add an extra spin to your whole flight experience the Wacky Wabbit Harvard will be demonstrating aerobatics if you’re up for it. What’s more you might even get a chance to have a go at the controls. 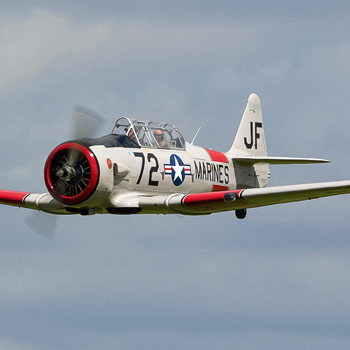 Get ready to check in for your all-inclusive vintage military flying day! If you’re a fan of historic aircraft you will love these aviation experiences. The Silver gives you 30-minute flights in two classic military trainers – the Chipmunk and the Harvard. The Gold adds in a Stearman for that full historic aircraft experience.

First up is the Chippy. This is 1950s aviation at its very best. In fact the Chipmunk was so good that it served as the military trainer of choice for the RAF Air Cadets all the way through to the 1990s. Now that’s what we call dedicated military service. Ask pretty much anyone who learnt to fly in the Forces and they’ll have only good things to say about this most elegant of aircraft. It’s pure joy to fly and to fly in.

Then it’s the formidable Harvard. One of the finest examples of a North American Aviation T-6 Texan currently flying in the UK she is utterly resplendent in US Navy training colours and ridiculously photogenic too. N6972C was built in the States in 1946 and served as a trainer to both the US Army and Navy eventually landing at Compton Abbas in 2016 to take up her new role as the star crowd-pleaser. You can’t miss that 600bhp engine. The sound is incredible. And you’ll be in the cockpit experiencing those low-level flypasts from the co-pilot’s seat. And if you’re up for it there could well be the chance for you to get inverted!

If you go for the Gold experience you will also be treated to some open-cockpit flying in the Stearman. This vintage 1940s biplane from Boeing was an incredibly popular trainer (and some would say roomier and warmer than its Tiger Moth counterpart). This flight gives you the chance to feel the breeze after the closed cockpits of the Chipmunk and the Harvard flights.

Almost as legendary as the vintage aircraft at Compton Abbas is the cafe. This is where you and your guest will be invited for your two-course lunch in between your vintage military flying escapades. The cafe affords lovely views right across the runway stretching as far as Stourhead Gardens and boasts a large terrace and garden area too.

And after your flights what better way to celebrate your vintage military flying day than with a Champagne toast in front of the aircraft? A very fine way to round off the day you flew in some priceless historic aircraft out of Compton Abbas.