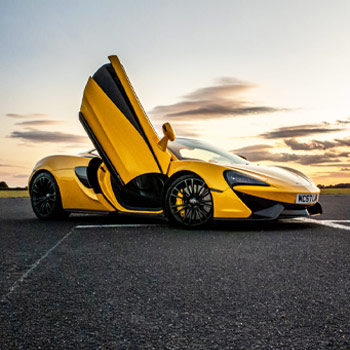 Get ready for your McLaren 570S drive! The chance to drive a McLaren 570S should not be taken lightly. This is a wonderful car and one that is pretty rare even amongst the supercar fraternity. Make the most of our McLaren 570 experiences and drive this amazing car for three or six miles.

The McLaren 570S’s specs say it all. It’s a superlative sports car. The name McLaren is synonymous with motoring racing at the highest level. What’s more it’s a British designed and built car having rolled off the very pristine production line at Woking. Well we say production line it’s more like a laboratory where cars are hand-built by highly-skilled technicians.

As well as drop dead gorgeous looks this car has power. Just look at those specs. A 0-100km/h time of just 3.2 seconds. That means you will have gone from standing start to 62mph by the time you read this sentence to this full stop. The McLaren 570S is a mind-bogglingly rapid drive. All that’s possible thanks to the carbon and aluminium body the 3.8l twin turbo V8 engine and the incredible aerodynamics.

McLaren’s obsession with aerodynamics has more than paid off with the 570S. Air intakes galore with sculpted bodywork designed to direct cooling air to the right place and create oodles of downforce help keep this incredible car glued to the road as you drive. And we have to give a special mention to the doors. A work of automotive art in themselves. They are classic McLaren butterfly doors that open upwards and outwards and they’re frameless too. Impressive.

So now you’re actually in the car. Cocooned in the cockpit it is ( apart from the ‘infotainment’ screen) pretty minimalist. You’ll feel instantly engaged with the 570S. Engine burbling away this is the moment of your McLaren test drive. Your chance to see how this seven-speed dual-clutch V8 copes with the track. And we have to say driving the McLaren 570S is a thrill. Pure driving heaven. Not bad for a car dubbed the ‘affordable and practical’ of McLarens by the manufacturers themselves! 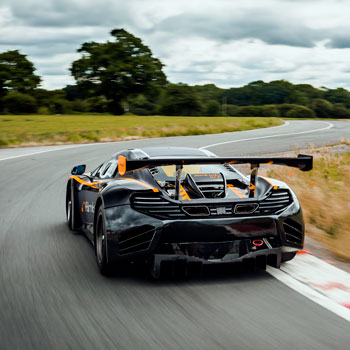 When this McLaren GT3 experience landed on the IntotheBlue desk we couldn’t quite believe our eyes. We couldn’t help but ask: “Is this a REAL McLaren GT3? Yep. It sure is. And costing up to £320 000 we are more than a little bit excited to be offering you the chance to drive a McLaren GT3.

Of course we all know McLaren for its success in Formula One but back in the days of yore the elite motorsport marque was rather good at GT racing too. This GT3 heralds the very welcome return to the sport for McLaren – and we love it.

As well as costing a fortune these McLarens are very rare too. You probably won’t see many away from the professional race circuit where FIA GT3 series are raced except perhaps Dubai playground for the very rich and famous. So yes this is your unique opportunity to drive this amazing McLaren GT3 car.

The clever bods at McLaren took the very nice MP4-12C and pimped it to the max to create this successful racing GT3 version. Weight has been drastically reduced an F1-style ECU has been integrated and a rather nice aero-styling package added too which certainly makes this car stand out.

Streamlined and ready to race inside the cockpit is utterly mesmerising. The kidney-shaped steering wheel and dashboard are littered with lights and driver displays. You might think this is a pared-down race car but actually you’ve got traction control and ABS on board. You’ve also got an upgraded six-speed sequential gear box with paddle-shift. See we told you it was a proper GT racer!

And indeed a proper racing car like the McLaren GT3 needs to be driven properly. You’ve got a twin-turbo V8 3.8l engine to play with. We could tell you all about the increased downforce the new suspension and brakes the spoiler and the air intakes but let’s face it you just want to get out there and drive it. Time for you to book your slot for your McLaren GT3 experience exclusively available at the Bovingdon Airfield track in Hertfordshire. 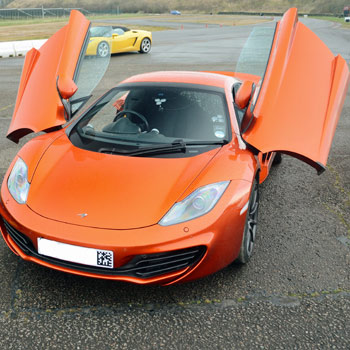 Drive a top notch McLaren around a race track! Although this amazing machine is a fully road-legal sports car we think the McLaren MP4-12C thrives when being driven around the tight hairpins and along the fast straights of a race circuit – and this is just what you will be doing.

This stunning British roadster is lovingly hand built at the McLaren Production Centre in Woking. The racing car maker is a Grand Prix legend whose team of engineers and designers are behind many of the most success Formula 1 winners. Drawing on 50 years of racing victories they have also created the most iconic and exhilarating road cars in the world.

The McLaren borrows lots of gadgetry and wizardry from Formula 1 design – it has a twin turbo 3.8 litre V8 engine that gives a mighty 592bhp and 0-60mph in 3.1 seconds. The dual clutch gearbox is controlled by a gear change paddle perfectly positioned on the racing wheel so you can whizz up through the gears to get the full force of that breathtaking acceleration.

Combine all that with a lightweight carbon fibre composite chassis and you’ve got yourself one serious sporting legend that you will have the chance to experience first hand when you drive this car. Before you head out for your driving laps in the McLaren you’ll have an in-car driving briefing in a hot hatch with an expert instructor of high-speed driving and then it’s over to you…

As a driver this is about as close as you can get to the proper F1 racing experience while still driving a road car. It may not be the most luxurious sports car in the world – but it’s one of the ultimate road cars for speed performance and race-inspired design. And of course you don’t have to be Jenson Button to appreciate the McLaren’s functional and clean design and the sense of perfect control. 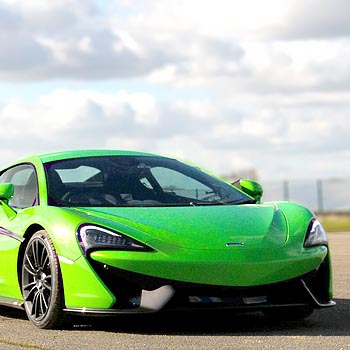 Oh.My.Word. This the moment the McLaren 570S comes to a track day near you! The McLaren sport series is a superlative selection of sporting masterpieces and this experience gives you the chance to actually take one of them the 570S round a proper race track. Nice.

As you probably already know each and every McLaren car is lovingly hand-built in Woking. And it’s a very specialist outfit selling fewer than 2000 cars a year. So whilst the cars are already pretty rare on the public roads it’s even rarer to actually have the chance to be driving one on a race circuit so what are you waiting for

Let us tell you a bit more about the 570S. Well you guessed it it’s named after the horsepower. Pushing out 562bhp from the 3.8l V8 engine this rear wheel drive lightweight car boasts a 0-62mph time of just 3.2seconds.

Unveiled at the 2015 New York motor show this is McLaren trying to capture the ‘everyday supercar’ market with the aim of being highly drivable and more practical than you’d imagine for such a fancy car. That means there’s even storage and luggage space and nice comfy leather upholstery for that cruising rather than racing feel. Mind you it still costs upwards of £140 000…

So now you’ve been introduced to the car (which we might add retains those distinctive gull-wing doors so loved by McLaren Automotive) the next question is how long will you be at the helm of this car for? The answer is simple. You will be at mission control of this beast for six delectable miles.

The 570s is a bit like the young agile Lion of the McLaren pack. Let’s see if you can tame the McLaren 570S during your session on the track. Time to roar away from the pit lane…