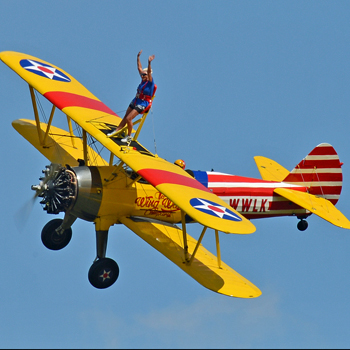 Climb onboard a Stearman and go wing walking at Compton Abbas aerodrome! Some would say you’d have to be mad to pay to stand on the wing of a moving aircraft. Indeed we sell perfectly enjoyable experiences where you can sit in a nice comfy seat inside the cockpit and enjoy the Wiltshire views that way. But for reasons only known to would-be wing walkers you seem to love taking the far more daredevil option of being strapped onto the top wing instead!

Even facing the full-force of the elements doesn’t put you off. Having your jowls wobbled mercilessly as you swoop around the sky doesn’t seem to bother you. Neither does the fact that you could be diving at angles of around 35 degrees to do flypasts. And you’re certainly not fussed about there being a whole crowd of people watching the entire aerial spectacle above Compton Abbas airfield as it happens.

Wing walking with this team one of the few UK fully CAA approved operators of wing walk flights for the general public and for sponsored wing walks is only available through IntotheBlue.

Just a couple of miles from Shaftesbury Compton Abbas is unique in that it is one of the highest airfields in the country. Even before you get off the ground you’re 810ft on top of a hill in the heart of Cranborne Chase Area of Outstanding Natural Beauty. Spectacular views are therefore guaranteed for your wing walking out of Compton Abbas making this experience all the more breathtaking.

We doubt you’ll have much time for taking in the views of scarp slopes of Blackmore Vale or the chalk formations of the Salisbury Plain as you wing walk but if you do look around you’ll agree it’s a super backdrop for such a crazy aerial activity. Instead you’ll probably be much more interested in trying to combat all that fast-moving air (you can reach speeds of 120mph) making huge waving gestures to your friends and family who have come to spectate and cheer you on as you conquer wing walking at Compton Abbas. Enjoy! 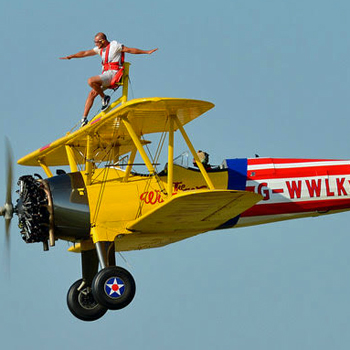 Go on be brave and do a wing walk in Lincolnshire! Whether you step up onto the wing for charity or just for the sheer pleasure of doing something this mad these wing walking experiences will literally take your breath away.

You will be taking to the skies to ‘walk’ the wing of a biplane at Wickenby Airfield in Lincolnshire. These events are operated by specialists as offering wing walking to the general public (and indeed going wing walking for charity) is so regulated. Indeed it’s not everywhere in the country you’ll find such an activity so if you’re in the Lincolnshire East Midlands/Midlands and South Yorkshire areas this small airfield midway between Lincoln and Louth is perfectly placed for your first foray into wing walking.

Indeed Wickenby is a lovely place for your wing walking display. The original 1940s control tower is still standing and very much in use as a museum and brilliant little cafe. This is very useful information when you find out that you are welcome to invite up 50 (yes 50!) friends and family to come along and watch your wing walk show in Lincolnshire. It means there are good facilities with plenty of parking space to watch the aerial action and cups of tea being freshly brewed at all times.

As for what you’ll be doing whilst your perched atop that wing? Well that really depends on your courage. Most newbie wing walkers try a wave or two (which in itself isn’t easy at the high speeds with the wind resistance) whilst those who really take it will be lifting their legs and giving it the thumbs aloft. The sequence you’ll be flying is a real crowd-pleaser too as you do low-level flypasts in front of the control tower and sweeping turns as you wing walk over the Lincolnshire countryside. Utterly thrilling! 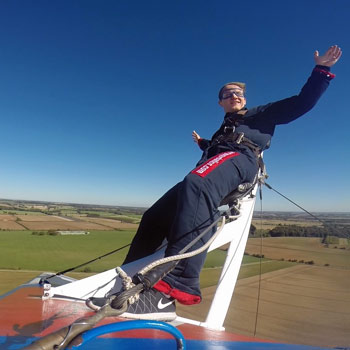 This is your chance to go wing walking in Gloucestershire with AeroSuperBatics! AeroSuperBatics has operated the world’s only aerobatic wing walking display team since 1987 and has flown at many airshows performing as the Crunchie Flying Circus the Guinot wingwalkers the Utterly Butterly Barnstormers and the Breitling wingwalkers. You’ll need nerves of steel and a head for heights for this one but it is totally amazing.

If you’ve ever been to an air show in the UK the chances are you will have seen this wing walking team performing. The AeroSuperBatics wing walkers have thrilled and delighted over six million spectators in the UK alone with their daredevil aerial antics. Now it’s over to you to literally climb up onto the wing of a biplane and go fly!

You’ll be heading to AeroSuperBatic’s home base at ex WW1 Rendcomb Aerodrome in the Cotswolds for this wing walking experience. All pilots are current display team pilots and your coach will be a fully trained professional wing walker. Appropriately your AeroSuperBatics safety briefing takes place in a fully restored Officer’s Mess building dating back to 1916 where the World War 1 RAF pilots would assemble before taking off on their training sorties.

The professional AeroSuperBatics wingwalkers will tell you that you need some serious core strength to perform handstands at 1000ft whilst battling the wind pressure of flying at 150mph. And in fact it’s quite a mission just to get to the wing walk rig of the 1940s AeroSuperBatics Stearman biplane. And to give you an idea of wind pressure think about how it feels if you stick your head out of car window being driven at 70mph on the motorway – and double it!

Of course any activity like wing walking carries an element of risk but these Gloucestershire-based wing walkers have a 100% safety record having operated thousands of wing walks since they started in 1984 and they’re considered the industry leaders. One thing we will say is that you should check the requirements carefully before buying a voucher as the height and weight limits are quite strict.

Once you’re strapped in and up there on the wing taxiing along you’re sure to be thinking “What on earth am I doing? I’m actually standing on the wing of plane that’s about to take off.” You sure are. And once you’re airborne and wing walking look down at your gathered friends and family and (try) and give them a hearty wave as your pilot performs fly pasts zoom climbs steep dives and even banked turns – just like AeroSuperBatics professionals! 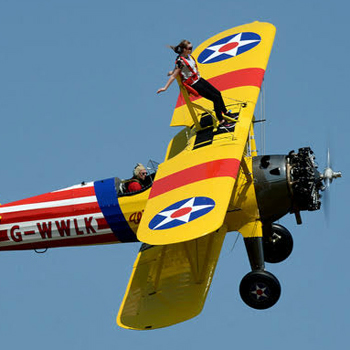 It’s going to be a proper barnstormer of an experience when you go wing walking in Kent! You will be learning the art of walking on the wing at Headcorn Aerodrome one of the busiest general aviation airfields in the south east. This is brilliant bucket list stuff right in the middle of the Garden of England.

Headcorn formerly known as RAF Lashenden is a fabulous place. It’s a hub for all things entertainment and aerial from parachutists and vintage pleasure flights to this the chance to scare yourself silly by doing a wing walk. You will be standing on the top wing of a Boeing Stearman biplane whilst flying at speeds of up to 120mph over the Kentish countryside.

Of course it’s not just a case of turn up and go. The ground crew team conducts a thorough briefing where everything is explained to you and where you’ll be shown how to climb into and out of the harness on the plane. You’ll need to be fairly agile for this as it does require you to climb up onto the top wing of the plane.

Once you’re up there it’s going to feel pretty mad. It’s not every day you find yourself standing attached to a biplane gazing out at the runway and beyond. As anticipation grows it’s time to be brave and get ready for that once in a lifetime moment. Now the Stearman is gathering speed…and suddenly you’re airborne. And that means you are wing walking!

As you swoop over the Kent countryside don’t forget your invited friends and family who are all gathered on the ground at Headcorn’s viewing area. Give them a wave shout a bit grin like a Cheshire cat. Show them you are having the time of your life up there! In reality any movement is pretty tricky due to the wind pressure but we’re sure you’ll be giving it a go anyway.

It’s that kind of experience. The one where you kind of dare yourself to do it and yet can’t quite believe you agreed to it. Going wing walking in Kent is a totally epic thing to do and all the team at Headcorn will be encouraging you every step of the way to conquer the wing of the Stearman. 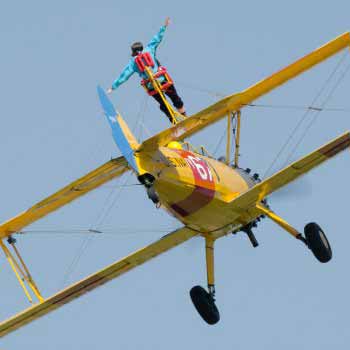 Wing walking Devon – fly over the Blackdown Hills strapped to the top wing of a Stearman biplane! Despite how crazy it sounds you can ‘walk the wing’ with no skills or experience needed. This is how you become a wing walker in Devon…

If you meet the criteria for doing a wing walk (see the full details blurb for all the ins and outs) you can do a wing walk. It’s as simple as that. On the ground briefings are kept as short and clear as possible and before you know it you’ll be in the ‘rig’ securely strapped into the five-point harness.

With the propellor turning and engine gurgling it might well be the moment you ask yourself what on earth you’re doing. You (yes you!) are about to take off in a splendid vintage Boeing Stearman biplane. But you’re not in a seat you’re actually atop 10ft above the ground strapped to the top wing. As the throttle opens and the plane moves off at a pace this is the moment you realise this is actually happening and there’s no going back!

The first thing that hits you is the onrush of wind. It’ll hit you right in the face until your cheeks wobble. Wing walking is open cockpit flying at its most extreme so expect to feel the full force of the elements as you fly. See if you can battle the wind resistance to do a little to your crowd of gathered friends and family below – it’s not as easy as sounds!

Once you’ve got used to the rather extraordinary sensation of flying on the wing of a Stearman your pilot will start the routine. You’ll find yourself zooming past the flight line in a series of fly pasts that’ll take you so low you could seemingly pluck daisies from the grass below. It’s thrilling it’s noisy it’s windy but it’s brilliant.

Now you’re feeling like a confident wing walker it’s time to take this Devonshire display up a notch for the final manoeuvres. Hold on tight as you dive from 500ft whoop with delight as you execute a daring zoom climb and holler with excitement as you perform a final ‘run and break’ before coming in to land.

Hair – windblown
Legs – jelly
Nose – snotty
But you loved it and we bet your bottom dollar you’d do it all over again. Go on be a daredevil and go wing walking in Devon!