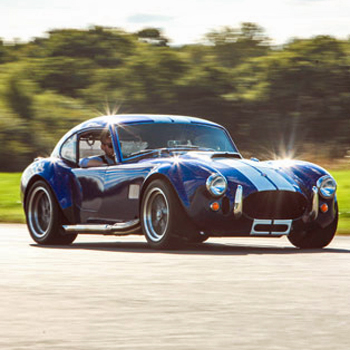 This is the British Classic Car Choice and the experience does exactly that – gives you a choice of great British classic cars for you to drive! Offered at a range of tracks and circuits around the country it’s great value and flexible too.

We are offering vouchers to drive one two three four or five cars in the British Classic fleet. The cars represent the British car industry across the ages. Some are big and throaty sports cars others are more modest motors but all are great fun to drive.

Our absolute favourite is not the most expensive car in the lot but it is a total classic and it’s increasingly rare to find one in such good condition. The MkI Escort RS was the rallying king back in the day and this fine example of the Rallye Sport harks back to a golden age of rally.

In a similar vein is the Mini Cooper S. This is a proper British icon of a car that transformed motoring in this country. Give your humble Mini a John Cooper makeover and you’ve got yourself a brilliant little rally car (just ask Charlie Croker and his Italian Job gang!).

Same with the Caterham. Small and extremely light this car may not have the long smooth lines of your usual brand of supercar but it will leave them standing at the start line with its amazing acceleration.

Things go very stylish with the Aston Martin V8 Vantage the Jaguar E-Type and the replica DB5. These cars need no introduction everyone knows they are amongst the most beautiful cars ever made. They’re those head-turning cars you’ve always coveted. Once again they all tick the box of British classic and all are fab to drive.

Last but not least is the AC Cobra. OK it’s not strictly an all British classic car as it was an Anglo-American project with Ford in the USA. This reproduction has come all the way from America and has been fitted out with a modern 5.0l V8 Mustang engine. We think Tony Stark would approve.

As to which cars you will be driving on this British Classic Car Choice it’s totally up to you. You get three miles in each one giving you plenty of time to get a taste of the best of British motoring across the decades. Now booking at locations around the UK. 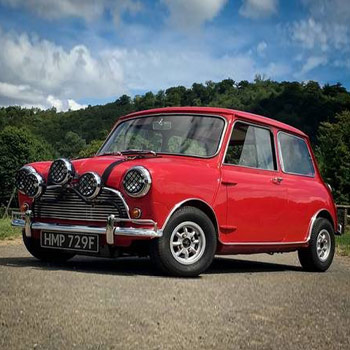 The Mini Cooper classic is a British popular culture icon straight out the 1960s. These fun experiences give you three or six miles driving a 1968 Cooper S at your choice of track nationwide. So is the old Mini Cooper better than the new BMW one?

You’ve got to hand it to Alec Issigonis – he designed one hell of a brilliant little car. When the first Minis rolled off the British Motoring Corporation production line in 1959 it changed motoring as we know it. The Mini was simple practical and affordable. A certain John Cooper spotted the racing potential in these little city cars and before you know it the souped up Cooper version was ready to race.

And whilst the Mini Cooper was indeed a good racer the car is perhaps best known for its role in the 1969 heist film ‘The Italian Job’. Red white and blue Mini Coopers race through the streets of Turin in what is surely one of the best chase scenes ever in a movie. Nipping along the arcades bumping down paved steps turning into tight alleyways with ease and whizzing around the rooftop test track at the Lingotto car factory the Minis were the stars of the show.

These experiences play homage to these classic Mini Coopers with a very special 1968 Cooper S for you to drive. And have you seen the number plate? HMP729G is a nod to Charlie Croker (the gang leader in the film played by Michael Caine) who whilst residing in Her Majesty’s Prison was assigned prisoner number 729G.

Now we have to say compared to today’s BMW Minis the old Mini Cooper looks absolutely tiny. You’ll feel like a giant standing next to it. But this Mini Cooper classic more than holds it own out on the track so get ready to drive your little pocket rocket. And we’re sure the organisers won’t mind us saying ‘drive it like you stole it’ – that way you’ll do Charlie Croker proud! 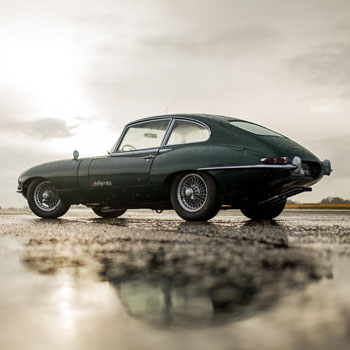 Say hello to the beautiful Jaguar E-type Series 1! This is a stunning car and we are delighted to be able to offer you the chance to drive it at the track in Bovingdon. It’s going to be everything you’d expect – and a little bit more.

That’s because this particular E-type is one of the later Series 1 models and that means it’s fitted with the same 4.2l engine that featured in the XK giving you increased power but with those same gorgeous looks that the earlier versions had and the later series didn’t quite capture so well.

Indeed when the series 1 E-type Jag was launched at Geneva Motor Show in 1961 it blew the tyres off every other newly-launched car there selling over 500 through the duration of the show. Next came the New York show where six of the series 1 were sold in just 30-minutes. Even Frank Sinatra allegedly said: “I want that car!”. And quite frankly we can’t blame him.

For your experience you will be driving this series 1 E-type for 10 whole laps. But before then there’s a welcome and briefing. Then you’ll head out in a sports saloon with the instructor driving for four sighting laps including one at high speed. Then it’s the big one. The moment you get to drive this lovely example of a vintage Jaguar E-type series 1.

It’s a real delight. This is what motoring was always meant to be like. A wonderful car that makes all the right noises and is pretty powerful too. Back in the 1960s when this 265bhp E-type was hitting top speeds of around 150mph the average family car could only reach around 70mph.

Savour every moment of your 10 laps in this Jaguar E-type series 1. An instructor will be by your side to help you get the most out of your time behind the wheel and we think you’ll be pleasantly surprised by how this car from another age handles on today’s track. It’s certainly going to be a thrilling drive in this lovely E-type series 1! 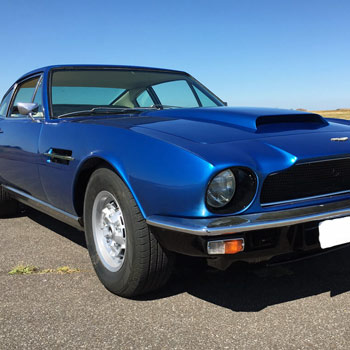 Fancy driving a classic Aston Martin? You’ve come to the right place. We’ve got a rather lovely (and particularly rare) 1970s Vantage revved up and ready for you at Heyford Park in Oxfordshire. Time to tell you more about this special sports car.

In general Aston uses the ‘Vantage’ moniker for upgraded models of their cars. However for just one production year that spread across 1972 and 1973 the Vantage was a model in its own right. Just 71 of these classic Aston Martin beauties were produced and we’re giving you the chance to drive one of them!

As you can probably tell from looking at the car the design was something of a departure from the classic Aston style. Like its DB6 stablemate of the same era the car was very much designed with the American market in mind so it’s a big fat 4.0l straight six engine under that long bonnet and it’s got automatic transmission too.

The sleek fastback of this Aston is quite different from the likes of the DB5 that featured in the James Bond movies. But worry not Aston purists those side and bonnet air in-takes synonymous with Aston are still very much apparent as is the iconic white-winged name badge on the bonnet. Inside this car it’s like stepping back in motoring time. All the dials are analogue the steering wheel seems enormous and best of all there’s a radio cassette player onboard! Don’t get distracted by these classic throwbacks to the 1970s though you’re here to drive this Aston so it’s over to you.

There’s a lot of power under that bonnet – and no driver aids to help you. As you push the gear lever into ‘Drive’ you’ll be off streaking down the Heyford Park track like a flash that gorgeous metallic blue coachwork sparkling as you go.

We are offering Blast and Thrill experiences for these classic Aston Martin drives. The Blast gives you three laps behind the wheel and the Thrill gives you six laps. If you’re looking for best value opt for the Friday voucher alternatively go for the Anytime voucher and all dates are open to you. 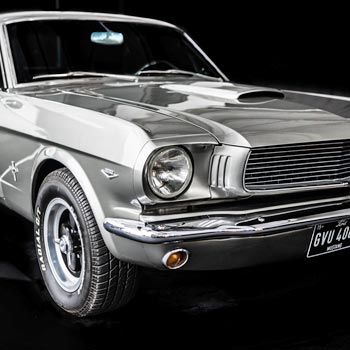 Go cruisin’ in your ‘stang with these great Mustang rental deals! A full fleet of classic American Ford Mustangs is ready and waiting to roar off with you for a 24-hour hire package that’ll see you driving an all-American Mustang in the UK on the open roads.

This classic Mustang hire is exactly that. The cars for rental are genuine Ford Mustangs that have been imported. Some have undergone a complete restoration and renovation in the UK that has not left one body panel or mechanical part unturned. Others arrived in restored condition from the States ready to take the British roads. Today each and every wild horse of a Mustang available for you to hire is presented to you in great condition – considering they are over 50 years old!

It’s worth noting that all Mustang hire cars in this stable are left hand drive so you’ll be getting a truly authentic driving experience. And it’s definitely going to be all about the cruising as they are all automatic transmission too. There’s a mixture of straight sixes V8s and various body styles too and our vouchers are valid for all cars.

Just imagine coasting along around the country roads of Lewes and East Sussex in a viper red 1967 convertible Ford Mustang. Make heads turn as you drive along the seafront in a California-style with a striking blue Mustang called Mr Horse. Rent a rare fastback Ford Mustang and you’ll be channeling your inner Steve McQueen in Bullitt – but no epic road races with any Dodges please!

Indeed with all hire cars being classic Mustangs from the 1960s each one has a story to tell. The sublime burgundy red Mustang came with its original bill of sale from 1966 and the pewter silver 1966 V8 has been restored with more than a nod to the famous Eleanor from the film ‘Gone in 60 Seconds’.

The older Mustangs are absolute icons and they clearly hold a place close to the heart of this family-run company which specialises in renting out immaculate examples of these great American pony cars. Book your Mustang rental so you too can feel the cool vibes of classic motoring straight from the US of A to the shores of East Sussex!