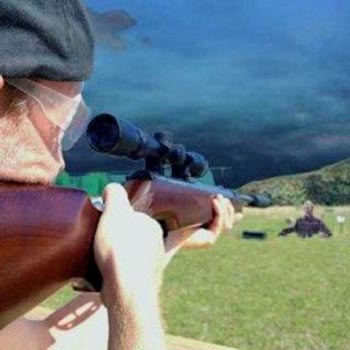 Do you know the best way to kill a zombie? Miracle cure perhaps? Don’t count on it. You just have to take them out one by one using your finest shooting skills. And that’s just what you’ll be doing to save the universe on this experience. Use your finest anti zombie equipment and get shooting.

The best zombie defence is to have a arsenal of weaponry. At this outdoor activity centre near Calverton in North Nottingham you’ve got air rifles crossbows and axes which is a pretty good mix of arms when it comes to killing off any zombies you might come across. Before you can face the onslaught of the undead a little safety briefing so you know how to handle your arms.

The first wave of zombies comes in the form of distorted and disgusting zombie faces that you’ll be lobbing your tomahawk axes at in a bid to disfigure these diseased ogres even more. Then there’s that revolting row of severed zombie heads to tackle. Try not to look them in the eye as you line up your crossbow but when you release the arrow let’s hope it lands squarely in the eye socket to stop them staring at you!

The zombie apocalypse continues on the air rifle range. We reckon one of the best defences against zombies has to be the good old rifle. No matter what gauge of gun you’ve got it’s how you use it that counts. Picking off zombie-themed targets like a lone sniper or working as a team using the ‘clear a room’ multiple firing approach – both work pretty well in our book!

They say the traits of zombieism are anxiety agitation paranoia and terror which is why the deadly infection spreads so quickly as they bite victims. Luckily for you none of the zombie targets you’ll be facing with your anti zombie equipment will bite back but they are pretty scary. You’ll need to keep your zombie-fighting wits about you whilst you shoot.

As for the best way to kill a zombie – you can tell us after you’ve hit them with axes peppered them with air rifle pellets and impaled them with crossbow arrows. Of course this is a zombie-themed shoot ‘em up session and no actual disease-ridden semi-dead corpses will be harmed in the making of this experience. 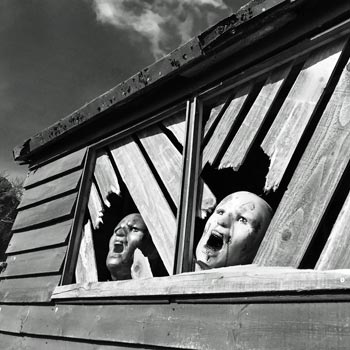 We need you the rapid response team to assist with this Zombie archery challenge! News has reached us that archaeologists on a dig in a quarry in Norfolk have gone missing. There are fears that this is a Zombie attack and the only ones who can combat the Zombies are the archers of Norfolk – and that’s you!

Good job you’ve just had a training session to teach you how to correctly handle a bow and arrow because now you’re needed urgently for an archery mission like no other. As you leave the confines of the safe zone behind to head into the quarry a few more details are coming through as to what’s going on there…

It seems the team of archaeologists were on the point of a major discovery at their dig. With no updates from the team in hours Officer Denbie was sent in to the quarry to check on the team’s well-being. The last known contact with Denbie was over the police radio where he was heard saying: ‘Kill me. Kill them. Kill me now’…then nothing. Sources say they glimpsed strange zombie-like creatures on CCTV in the area.

This is where you as a member of the crack Norfolk archery team comes in to defeat the Zombies. It’s time to break off into small groups and head into the quarry armed with your trusty bow and arrow. Watch your step this is an infected area and dastardly zombies could be anywhere. Hiding in sheds and dug-outs the infected have only one thing on their minds – eating flesh.

You’ll need to keep your wits firmly about you as you move from area to area. When you come across a severed Zombie head see if you can put those new-found archery skills to good use by landing an arrow right in between the eyes. That’s where it really hurts even for zombies. Hunt down the bloodied torsos and take aim in a bid to save the quarry Norfolk and the universe from the zombies.

Zombie archery is available as a two-hour experience at this professional archery centre near Kings Lynn. All the gear you need is included along with your initial training session in the safe zone before you head off on your zombie hunt in the quarry. Good luck! 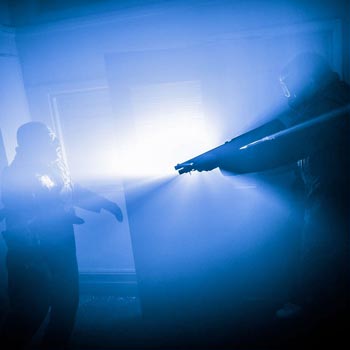 A chemical breakout is going down so it’s time to engage in a zombie blitz! These zombie experiences in Wigan and Bury are going to be intense. There are undead and they could be anywhere. Will you work together as a team to exterminate the threat or will your group flounder in the face of the ferocious zombie attack?

You’ll be blitzing the zombies in a former mill in Wigan or Bury. Both buildings are vast and you’ll be encountering various scenes and scenarios from the mean streets and markets to eerie jungles and laboratories where the initial biological agent might well have been created. And this is crux of your zombie blitz mission. A terrorist cell got its mucky hands on a potent chemical that’s turning the population into the flesh-hungry walking dead.

It’s up to you to not just neutralise the zombies but to ensure the survival of earth as we know it. There are corpses everywhere and a pesky zombie can be pretty much hide anywhere so you and your comrades will have to cover every corner of the rabbit warren of rooms sneaky mouse holes and tunnels.

It’s pure zombie horror as you blitz gloomy corridors dark and dank rooms and murky streets. At every turn it’s a scene of sheer horror. Mutilated zombies are wandering all around you the strange eerie cries and noises will set your teeth on edge and you’ll wonder if it’s possible to carry out your zombie blitzing orders and beat the baddies.

Taking out zombies is pretty physical and you’ll need your wits about you too. You set off on your zombie experience in Bury or Wigan with a limit amount of ammo and it’ll be up to you to identify the ammunition banks dotted around so that you can re-arm when necessary. But be careful these evil zombies wait for no-one and they could strike at any moment.

As if dealing with flesh-eaten half-deads wasn’t intense enough you’ll also be tackling a series of puzzles and mini missions during the course of your zombie blitz. Solve the mystery and you’ll be well on the way to getting humanity back on track. And remember the best of Bury the whole of Wigan and the world beyond is relying on your to save us all and restore order! 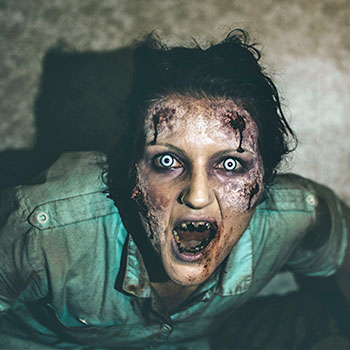 Ready yourself for a journey into the unknown as you try and fight the Zombie infection! All over the Midlands those dastardly undead are roaming ready to grab you. Can you and your crack team of Zombie soldiers ward them off long enough for you and the boffins to find a cure from this disease?

These zombie infection experiences are quite frankly full on. The locations have been specially chosen and range from secret woodland hideouts and disused tools factory to a former mental asylum and a country house used as Bruce Wayne’s mansion in the Dark Knight trilogy. These are the last bastions in the war against the Zombies but how long will they remain a safe haven? Word has it hordes of infected Zombies are on the hunt and they’re hungry. Very hungry.

We’re not even sure how you actually neutralise a Zombie but as a new recruit to the Zombie-fighting army you’ll be issued with an airsoft replica firearm complete with stocks of 6mm bb pellets. Sure get close to a horrible Zombie to pop a shot and you might be lucky and stun them for a while but watch your back as they will more than likely only be down and not out…

But there are no solo heroes on this experience. If you’re going to beat those infested Zombies into submission you’ll need to work as a cohesive team to succeed in the objective tasks that you face as you work you way through your location. No contraband like GPS or video recorders are allowed either. So you’ll have to rely on your instinct quick thinking and wit armed with just your airsoft gun to find and hit those Zombies with the cure to the infection and save the day for not just the Midlands but the whole wide world!

Throughout the three-hour attack you and your comrades will be right in the thick of it backed up by a veteran team of ZI soldiers. Fight the good fight attack this affliction and condemn the contamination from the ghastly walking dead but remember these are free-roaming beasts so they could appear anywhere at any moment – and you’ve got limited ammo so it’s no good just indiscriminately showering the place in pellets.

You’ll be getting one seriously apocalyptic Zombie experience that is theatrical dramatic and above all great fun. You don’t have to get a whole team together to enter we are offering vouchers for one to 12 would-be Zombie fighters and you can take your pick from the various venues around the Midlands. 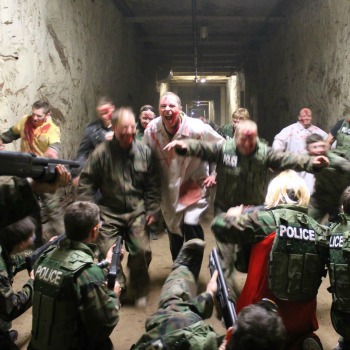 Have you got what it takes to fight off waves of blood-thirsty zombies? This crazy experience is sure to be a scream as you gun down the living dead armed with just an Airsoft pellet shotgun! Thankfully it’s not every day you come face to face with an army of gruesome creatures but on these action adventure ‘shoot ’em up’ experiences you’ll be saving the world from the imminent invasion.

Zombie fighting experts will show you how to use the Benelli pump action ‘guns’ that fire plastic pellets and get you kitted out in all the gear you need. You will then be led straight into the adventure game where you will be fighting the flesh-eaters head-on during this high-adrenaline role play game. All this zombie action demands nerves of steel tactical thinking and team work to be able to outwit out run and gun down the horrifying zombies.

So be aware the dead have risen they are hungry and they are after your brains! Like Shaun and his best mate Ed in the movie ‘Shaun of the Dead’ it’s time to summon up reserves of strength and courage you never knew you had strain muscles you’ve never heard of and zap the zoms. And no they’re not real as they are played by the centre’s staff but with that Hollywood movie-standard make up you could be mistaken!

You can take on the ugly bunch either in Bury in large empty former mill buildings with twists and turns galore and multiple scene set ups or near Kidderminster in a rather special location. Your zombie survival experience here involves hunting down the zoms in an underground bunker system that dates back to the days of the Cold War.

Neither of these zombie survival missions is not for the faint hearted. You will need to be prepared to go roaming and running around in the darkness to tackle the evil ones and save planet earth. Brilliantly ghoulish fun!