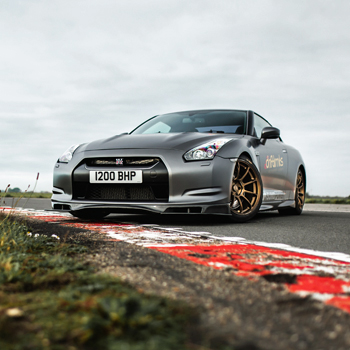 Introducing the Sumo Power Nissan – a 1200bhp Nissan GT-R! This very special experience is ready for blast off at Bovingdon Circuit in Hertfordshire. If you like your fast exotic cars this experience takes that to a whole new level.

The standard Nissan R35 GT-R is an awesome car. It goes fast. It looks fantastic and it handles really well. This Sumo Power GT-R is simply out of this world. Check your wing mirrors £1-millon Bugattis there’s another 1200bhp motor coming right up behind you – and capable of overtaking.

So how do you get up to 1200bhp out of a Nissan R35 GT-R? Well you pop in and see Sumo Power the high-performance tuning specialists. Give them a bag of money and they’ll transform your standard ninja Nissan into a total beast. A bit of a capacity upgrade a few extension and actuator bits some mods to the gearbox and a whole load of workshop hours and you’ve got yourself a serious powerhouse thanks to the likes of HKS (the Japanese tuning and engine specialist) and Dodson (the world’s leading after-market double clutch manufacturer).

Indeed this very Nissan R35 GT-R that you will be driving is Sumo Power’s ex-demo car used for impressing clients with what they can do. So yes this car is sublime. It’s a superlative example of what professional tuning can achieve and is in pristine showroom condition.

And yes in case you were wondering it does indeed sound as awesome as you’d hope. In fact before you actually drive the thing it’s a good idea to watch the GT-R go around the track so you can get the full benefit of the symphony of sound straight from the land of the rising sun.

Enough eulogising already it’s time to drive this car. As you slide into the bucket driver seat marvel at those digital displays do your ‘mirror signal manoeuvre’ thing (safety is paramount after all!) and then let the horsepower out to play. When you’re driving in standard mode you’ll have an impressive 700bhp under your foot. Pay for the high boost upgrade and you’ll max out your driving experience with the full 1200bhp at your disposal! 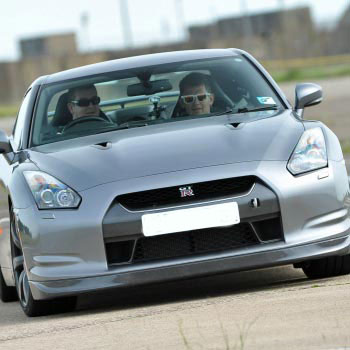 The Nissan GT-R R35 comes to Upper Heyford! The blisteringly quick Nissan GT-R is a true revelation. It is just SO fast. Despite being a fraction of the cost this car can give those fancy Italian supercars a serious run for their money. For the spectator it’s a case of blink and you’ll miss it – even though you’ll most certainly hear it for a while before and after it passes you on this Oxfordshire track.

Driving the Nissan GT-R at this former airfield circuit at Heyford Park is a case of pure serendipity. Remember the famous runway chase scene from the Fast and Furious 6 movie? Well that was filmed right here at this former RAF base in Oxfordshire. You could call it some kind of glorious homecoming for this Japanese wonder machine.

Purists will be careful to point out that the R35 which was finally released in Europe in 2009 is completely different to the Nissan Skyline GT-R. It’s a whole new car albeit one that has a twin turbo six cylinder engine and is all wheel drive just like the later versions of the Skyline. Even more confusingly Nissan has continued the chassis naming convention hence why this generation of GT-R is called the R35.

Some say you shouldn’t call this Godzilla whilst others think the nickname should carry on. But we’re not here to discuss the minute details of this massively impressive car. This experience is all about getting behind the wheel of the GT-R R35 model and driving it. For three or six thrilling laps of this Oxfordshire track you’ll be in charge. Well when we say it’s you in charge clearly this Japanese motoring rocket is the boss but you know what we mean!

Indeed driving a Nissan GT-R R35 is all pretty surreal. When you think that the multifunction onboard display was developed in partnership with the company who the creates the legendary Gran Tourismo games you get the feeling this car is part science fiction. But hurtling along that fast airfield straight you are most definitely experiencing all that acceleration for real! 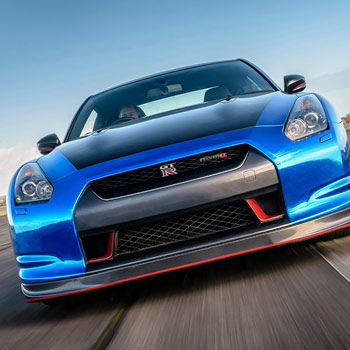 You’ll be in hot pursuit mode when you drive the Fast and Furious R35! This is your chance to drive a Nissan GT-R Nismo. This the Nismo incarnation of the legendary R35 series that blasted onto the road racing scene in 2007. And in case you’re wondering Nismo is Nissan’s in house motorsport and performance division. Yep the already fast GT-R just got a little faster!

Godzilla as the R35 fandom call it is a formidable motor just as it’s nickname suggests. Straight out of the pristine laboratories of Nissan in Japan the Nismo boffins have certainly worked their magic on this ultra sporting version of the GT-R. Those with a keen eye will immediately spot the upgrades from the outside – the carbon bumpers the lightweight wheels and that enticing red line insert that underlines the body-styling. And just like Brian O’Conner’s R35 from Furious 7 this Nismo is an amazing pearlescent blue chrome colour too.

But it’s under the bonnet of this up-rated car that is the consistent star of the Fast and Furious film franchise where Nismo has made most changes to the GT-R. Lifting twin turbos from the acclaimed GT500 racing car the Nismo GT-R boasts an astonishing 600bhp. A 0-62mph of well-under 3 seconds is totally realistic for this car. We’re seriously not sure how this special edition R35 doesn’t actually take off with acceleration like that.

As we’ve said the GT-R is already an impressive drive so some characteristics of this car didn’t need changing by Nismo and thankfully they haven’t. The high ride position is still there the incredible launch control and the racing styling in the cockpit is all present and correct – and even has lots of funky little Nismo logos dotted around everywhere!

The car is stuffed full of electronic gadgetry with a bewildering array of onboard options and choices. Good luck to you if you need SatNav there must nearly 20 buttons to set up and modify the thing. Even the gearbox has software. We’re sure your average little hatchback doesn’t have anything quite so fancy…

The R35 generation of Nissan GT-R has made it onto the roll-call of motors for those boy racer driving dream movies since 2009’s ‘Fast & Furious’ so it must be something special. And indeed Brian O’Conner always seemed to pretty happy with his R35s so let’s see how you get on driving this absolute beast of a car round a race track on your very own Fast and Furious R35 experience Nismo style! 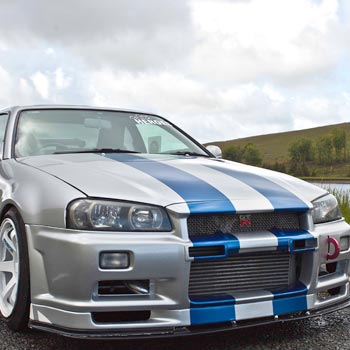 This Nissan GT-R vs Skyline experience is a true battle of the Godzillas! This brilliant Nissan GT-R challenge will pitch two Nissan GT-Rs against each other. Although they look pretty similar they’re different generations and each one has a loyal following. So which one will you crown your best in class?

The Nissan Skyline first launched way back in would you believe it 1957. Still a current model today the Japanese manufacturer has made many revisions across many generations of this car. For these head to head experiences two of the very best versions of the sportiest Nissans have come together on the track for your motoring pleasure and delight.

First up is the R34 Skyline. This 10th generation GT-R is very much loved and although production ceased in 2002 the model remains highly sought after and not just by boy racers indulging in a bit of illegal street racing. Motorsport fans simply love this car too. When it was lunched in 1999 it was pretty revolutionary. The dashboard display unit was a bewildering show with everything from simple oil and water temperature to boost pressure and even how much G-force you’re experiencing. When you think this was a time when GPS was a very costly option and LED headlights were unheard of on cars it’s even more impressive.

Then there’s the 11th generation GT-R. Gone is the straight six engine but performance is still within the realms of supercars like the 911 that cost a whole lot more. It also helps that the GT-R featuring in this Nissan versus Nissan challenge is actually a Nismo GT-R. That’s Nissan Motorsport International Limited and that gives you even more horsepower. Perhaps just as well it’s carbon-fibre light and all wheel drive to keep that 600bhp engine on the ground.

Both Nissans are quite clearly giant-slayers when it comes to performance (you’d leave a Ferrari standing at the traffic lights in either of them) and both are adored by high performance car fans the world over. All that remains for you to do is take both of them out for a spin on the track for three deliriously quick laps on this Nissan GTR vs experience and see which one you prefer… 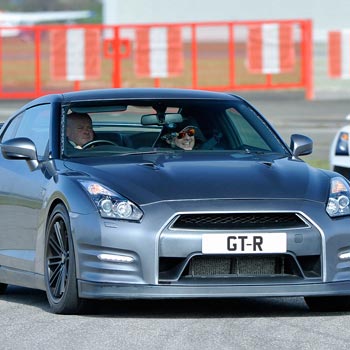 Let us present the Nissan GT-R test drive – the Black Edition! This special version of the almighty GT-R certainly makes this driving experience stand out from the crowd. Expect high performance high revs and plenty of acceleration to boot.

The GT-R name is totally and utterly synonymous with Nissan and their skill at producing the goods when it comes to creating cars that easily outstrip what we’d call the more classic supercars out there. When we first saw the stats for this GT-R we could hardly believe our eyes. 0-60 in just 2.8 seconds. That wipes the floor with many Porsche Lambo and Ferrari out there so no wonder that in both Japan and the USA these cars are street racing superstars.

Of course the iconic Nissan Skyline has been around for decades but the GT-R you’ll be putting to the test is one of the face lifted models. Technically speaking the Skyline name has been dropped but for all intents and purposes this is the same old Godzilla we know and love.

Apparently the design and testing team at Nissan wanted to come up with a revised GT-R that whilst maintaining those aggressive looks also made a nod to Japanese culture. We’ll let you decide whether Nissan has succeeded at what they aimed to achieve when you meet the GT-R for the first time before your test drive.

As we mentioned this is no ordinary GT-R. This is the Black Edition and as Nissan fans will know there are some really nice touches including RAYS Engineering wheels LED daytime brake and tail lights very smart High Density Discharge headlights as well as the carbon fibre spoiler. And just getting in the car for your drive is a ‘moment’ with the flush-mounted aluminium door handles – another special little extra detail on the Black Edition.

So now you’re in. The cockpit is a racy blend of black and red with an array of dials and displays. The car has dual clutch transmission. Then there’s the all wheel drive. Then there’s the twin turbo V6 3.8l engine. All of which helps with those impressive 0-60 figures. Let’s see how close you get to those figures on your Nissan GT-R test drive.

The Making of Harry Potter Studio Tour with Lunch for Two