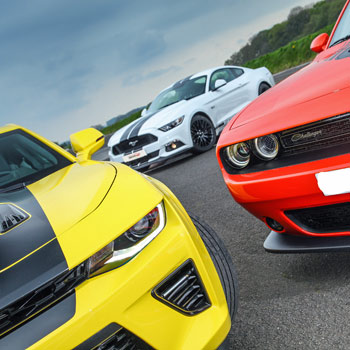 Roll up roll up – the American muscle car blast is in town! Book onto this muscle car driving experience and take a trio of the most iconic motors from the US of A for a spin. It’s happening at various circuits around the UK and bookings are now being taken!

On the other side of the Atlantic motoring is a wee bit different to here. You’ve got those multi-lane freeways miles and miles of cross county roads and huge expanse of countryside to cover. What you need for cruising in the US is a proper muscle car like a Camaro a Mustang or a Challenger. They’re all hulking gas guzzlers for sure but they definitely get the job done.

So can you have as much fun in an American muscle car in the UK? The answer is yes. With the experiences taking place on private tracks and circuits you won’t be getting stuck in traffic jams or having to negotiate road humps that scrape the fairings. Long straights and sweeping corners are what this trio of American muscle cars love and that’s exactly what you’ll be getting.

Your triple tipple of Americano comes in the form of the Ford Mustang the Chevrolet Camaro and the Dodge Challenger. Compared to European supercars these cars are big muscular and bulky. They might not win a style contest next to an Aston but they’d certainly win the bodybuilding competition.

To get these big cars shifting you need a big engine under that hood. Say hello to the 6.4l Challenger the V8 Camaro and the 5l Mustang. All three cars do a nice 0-60mph in under 4.5 seconds which is more than acceptable in our book.

It also helps that they all look pretty gnarly. The Camaro carries off that Transformers Bumblebee look with aplomb right down to the yellow and black leather interior. And the Mustang is just like rival Barricade. The Challenger has got that pony car retro cool styling down to a fine art.

And don’t forget on these American muscle car blasts you will get to drive all three of these muscle cars. Depending on which circuit you choose you’ll be at the wheel for two or three laps in each of these big brave and brash all-American modern muscle cars. Have fun out there guys! 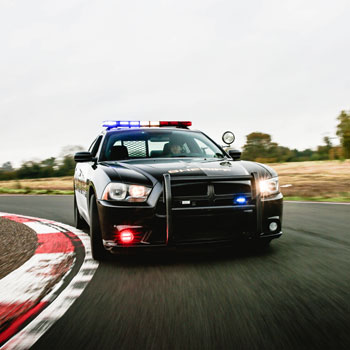 The Dodge Charger Pursuit – when you’re chasing a devious felon you need this car! One of the most powerful cop cars in America this souped up Charger patrols the highways of the United States of America keeping citizens safe from harm. There’s also one in Bovingdon – and you can drive it.

Behind those familiar black and white police car stripes you’ll find some pretty neat gadgets.The vehicle systems interface on the Pursuit features vehicle speed output drive position output radio mute input and pulse width modulation. Then there are the automatic locking doors and windows. And alongside the usual lights and sirens there’s even an onboard searchlight.

If you’re unlucky enough to be taking a ride in the back of Charger Pursuit courtesy of a law enforcement officer and fancy having a friendly chat with the cops up front you can forget it you’re separated from them by a bullet proof glass window and wire mesh barrier!

And if you’re the Feds in hot pursuit giving it some with the ‘yelp’ ‘wail’ and ‘take down’ sirens you’ll appreciate the HEMI 5.7l V8 380bhp engine under the hood. With an unbeatable top speed amongst Police cars the Smokeys can keep up with most bandits trying to get away.

The Charger Pursuit you’ll be driving on this experience has all the looks of a Sheriff’s patrol car and it’ll certainly turn heads when you accelerate out of the pits at Bovingdon. Pop on your Ray-Bans and drive this Dodge Charger Pursuit…like you stole it! 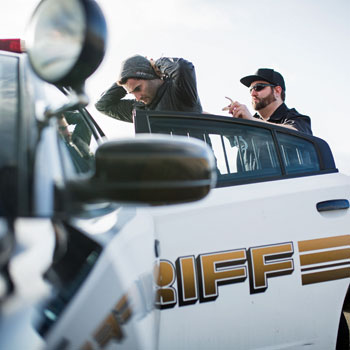 It’ll be blues and twos all the way on this Police Chase experience! Having committed an aggravated robbery and vehicle hijacking you’re the getaway driver. With the cops on your tail you’ll have to use your speed precision and skill to out-drive them. This is a live moving escape game and it’s all going down at Bovingdon Airfield!

In your briefcase is your contraband. Pop the loot in the boot and get a wriggle on. As any self-respecting baddie will tell you you need the right car to make your escape which is why we’re giving you the pocket rocket that is the MX-5. It’s rear wheel drive loves getting sideways and is pretty quick off the mark too. If the Mazda isn’t quite fast or salubrious enough to be your hot ride you can pay a little supplement to the mob and get your mitts on a Porsche Boxster.

So there you are with the hot property in the boot and your accomplice in the passenger seat to coach you on breaking away from the law enforcers. You’ll have to be pretty on it though as the Sheriff has got his Dodge Charger Pursuit out. Yes it’s a hefty beast of a car but that 5.7l Hemi V8 engine makes that cop car shift.

Luckily you’re one step ahead of the law as you’ve hacked their radio channel so you can hear everything the Police are saying. You might have the wail of the sirens behind you but you’re not going to give up. As you grapple for grip in the corners trying not to overcook it you hear a shout on the comms to deploy the stingers on the next corner. You’ve got the head’s up. A nifty swerve and you’ve deftly missed those tyre puncturing spike traps.

Will you escape to freedom or will you succumb to the Police? Once the cops in the Charger are in spitting distance the searchlight will come on and you’ll be totally vulnerable. Trying to concentrate and drive as the cops are right on your tail is getting increasingly difficult until finally you hit the stinger and bang go your tyres. Punctured. For real. Vehicle immobilised and the games up.

If you make it and you succeed in absconding your mug shot will appear up in the cop shop on the ‘Most Wanted’ board – a befitting end to your Police Chase experience where you managed to avoid getting cuffed and stuffed! 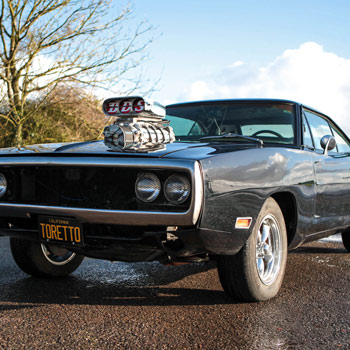 It’s like you’re driving Dom’s signature car on this Dodge Charger driving experience! The street racing leader’s 1970 Dodge Charger R/T was a car very much close to his heart. These brilliant experiences will see you driving a 1970 Charger that’s been done up to look just like Dominic Toretto’s pride and joy.

We learnt in the first Fast and The Furious film that Dom and his Dad built this impressive customised Charger complete with supercharger attached to the bonnet. Claiming a mighty 900bhp this beast from 1970 would do a quarter-mile straight line in just nine seconds. And that record was set by Dom’s Dad.

Since his Father’s death Dom keeps their precious Charger in the garage too scared to drive it. But as you might have guessed by the end of that first film Dom is seen roaring along the Los Angeles streets in his fabled supercharged Dodge. Despite being crashed multiple times the Charger rises from the ashes and features in several of the Fast and Furious films along with other second generation Chargers.

With all the car chases and stunts these cars endured the production team got through so many Dodge Chargers that they ended up styling up earlier models and totally rebuilding wrecks to be able to supply the many show-stopper scenes starring the Charger.

We’re thanking our lucky American stars then that this particular 1970 Dodge Charger has been beautifully restored as a faithful replica of that modified model in the Toretto family garage. It’s a true beast and best driven on the track which is exactly what you’ll be doing on the sessions. Your Dodge Charger driving experience is offered at several circuits around the UK and you choose between a three-mile blast or a six-mile thrill. 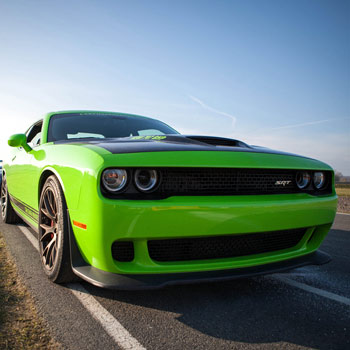 The Dodge Hellcat is one seriously street-wise car. It’s got head-turner throwback looks with thoroughly modern engineering brilliance under the hood. We’re talking an incredible 707bhp from a huge 6.2l V8 engine. Yep this is all-American motoring in the biggest and baddest style!

The Dodge Challenger SRT Hellcat (to give this beast its full name) is a bonafide muscle car. Big heavy wide low and mean it sounds like a bit of unwieldy gangster but actually the Hellcat has handling to match all that power. That’s because this is an SRT version. That’s SRT for Street & Racing Technology the high-performance arm of Chrysler who created this incredible car and they’ve done some rather nifty work to create the formidable Hellcat.

The car’s exterior give you massive clues about the performance of this Dodge. With extra air intakes and a more aggressive styling SRT has even made room for massive 20” alloys. Inside the cabin is roomy and it’s technically a four-seater family car but it’s really a fastback with a long bonnet low roof and proportionately small windows. Indeed some may say the rear windscreen only needs to be big enough to see what you’ve overtaken!

The 6.2l HEMI engine under the bonnet produces unbridled power. And it’s all beautifully harnessed by SRT. As the guys who run these Dodge track days say the Hellcat is ‘hugely overpowered’ so perhaps just as well you’ve got upgraded suspension and handling that gives you Street Sport and Track mode. Even so the tyre-smoking abilities of the Hellcat are pretty legendary in street racing circles.

We are offering three and six-mile adventures for you at the helm of the Hellcat. In the sea of dull car designs we are flooded with these days there’s no doubting the Dodge Hellcat totally stands out. It goes like a bat out hell looks bold and brash and makes all the right noises. Will you love SRT Hellcat as much as we do?