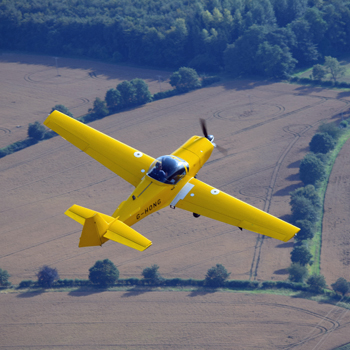 Fly Firefly aerobatics at Enstone! Go for some loops and rolls high above the Oxfordshire countryside with these aerobatic flying experiences out of Enstone Aerodrome. We are offering 20 and 30-minute flights filled with aerial moves that’ll turn your world upside down.

The Slingsby Firefly is a bit of classic amongst aviation fans. It’s a very capable two-seater aerobatic training aircraft that first flew in 1974 and was used by the RAF from 1995 to 2010. This Firefly is actually a T67 M200 version which is particularly rare as only 26 were ever built. She comes equipped with a more powerful 200bhp single engine and inverted fuel and oil systems – exactly what you need for performing aerobatics.

You will be flying out of Enstone Aerodrome for these Firefly experiences. It’s a busy and buzzing ex-RAF airfield located at Church Enstone between Woodstock and Chipping Norton with several flying clubs and private aircraft residents. Your hosting flying club has a full fleet of aircraft ranging from a Piper Cub and a PA28 to a choice of motor gliders.

And indeed it was Rene Fournier renowned for his motorised glider designs who originally designed and built the Fournier RF-6 which then became the Slingsby T67. It’s true the T67 does have distinctive looks that give more than a nod to it’s gliding cousins making this club at Enstone the perfect home for this Firefly.

Whether you choose the 20 or the 30-minute experience there will be plenty of time for you to get some serious aerobatic flying moves under your belt. You’ll need to be mentally prepared for it after all it’s not every day you find yourself upside in a plane!

What we love about these aerobatics sessions at Enstone is that the Firefly has a side-by-side seating configuration so you’ll be sitting up front beside your pilot instructor able to see just how they control the Firefly in and out of aerobatic manoeuvres – and it’s pretty impressive stuff. Buy your voucher now and get inverted over Enstone!

Release your inner ‘Maverick’ flying hero with one of our Top Gun experiences in West Sussex! Fly sky-high with the best of them and show the world you’ve got what it takes to become a Top Gun graduate during a real-life plane-on-plane combat flight.

On these thrilling Top Gun experiences your ex-military pilot will show you the ropes and get you up in the air but then it’s down to you to defeat your opponent for the day in a thrilling dogfight in total Top Gun style. You’ll certainly look the part as you’ll be kitted out in full military flying gear. You’ll even be encouraged to choose a call-sign for the day so are you a Maverick or an Iceman? Or a new aviator on the block?

Budding Top Gunners will also meet your opponent for the day – the person you’ll be trying to ‘bring down’ when the action truly begins. And if you opt for the Top Gun experience for two voucher you could be facing off against each other in those mean skies above Goodwood!

Your aerial mission starts off with a pre-flight briefing in the ground school classroom explaining how these agile T67 Firefly military trainer aircraft work. There’ll also be a session on emergency procedures such as deploying your parachute. And as this is likely to be your first aerobatic flying experience the stunts will be discussed in detail.

Then it’s out to the plane itself where your pilot will brief you on the cockpit controls. Finally it’s time to get airborne. What makes these Top Gun flights unique is that both Fireflys will take off at the same time. It’s then immediately into a formation climb and a few practice moves before you break into serious combat mode as you take part in the head to head air combat with the aim of ‘shooting down’ your ‘enemy’. Give chase and try to score a direct hit before returning to base to find out who won the battle of the skies.

All flying sessions end with a debrief where you’ll find out how much G-force you managed to achieve as well as the outcome of your aerial contest. A Top Gun experience gives you everything – the speed the power and the thrill. Aerobatic flying has never been so extreme. For something a little less dramatic why not consider one of our more laid-back flying lessons at venues nationwide? 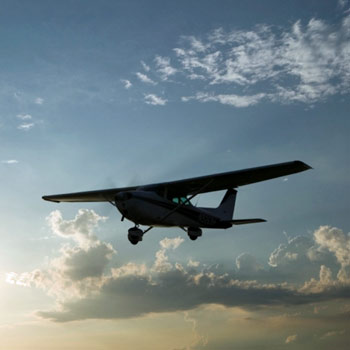 Dare yourself to some aerobatics out of Blackbushe! This experience will quite literally turn your world upside down as you take to the skies over Camberley in a Cessna Aerobat aerobatic plane for a thrilling 30-minute flight.

If you think your standard air experience is a little tame this is the flight of fancy for you. The two seater Aerobat is your classic high-wing aerobatics trainer having taught many a budding pilot to bust those aerial moves.

You’ll need to be pretty brave for these aerobatic sessions. It’s all quite disorientating when you look up and you see the ground. Miles and miles of it. Where’s the sky gone? It’s above you and you’re flying inverted in your super agile little Cessna! Back to level flight and you’ll sink back into your seat giving you just enough time to compose yourself before you’re off again pulling off another impressive trick.

Taking you on this aerobatic adventure will be Chief Flying Instructor Steve Morley or one of his equally talented colleagues at Camberley. These pilots live for flying and love nothing more than taking the Cessna for a spin with a willing passenger alongside them. And when we say spin we mean it literally. Spin entry and recovery will be explained to you before your skilled pilot sends the plane into a tumble…

It’s utterly thrilling stuff flying aerobatics and Blackbushe is a great airport to do it from. It’s a busy flying club and school with lots of aircraft. A lot more relaxed than it was in its RAF heydey of 1944 when over 3000 staff were stationed here it’s steeped in history with civil aviation at Blackbushe since 1945.

If you manage to keep your eyes open during your flight you’ll get a bird’s eye view of all the hustle and bustle of Camberley from the rows and rows of neatly lined motors at the British Car Auctions lot to trains passing through Fleet station and cars streaming along the adjacent A30.

And just one more thing. When you sign up for aerobatics at Camberley you’ll also get the chance to take control of the Cessna Aerobat. You could be getting you first hands-on taste of aerobatic flying out of Blackbushe Airport thanks to the brilliant instructing team here. 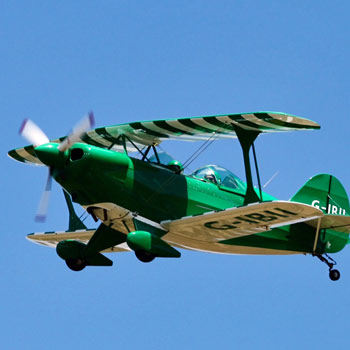 Small and often brightly painted the powerful little Pitts Special has always been an air show favourite. Capable of incredible moves in the air these agile little biplanes look like they’re great fun to fly. Now you’re about to find out if that’s true when you go flying in a lovely Pitts Special.

This classic Pitts Special S2a was built in 1977. Imported into the UK in 2001 the plane undertook a full restoration to then go ripping through the skies of Britain entertaining aviation fans with aerobatics displays and shows. She was even part of the Breitling Angels display team which explains the eye-catching livery as each of the four Pitts in the formation sported a bright colour.

Sitting at Staverton Airport this Pitts Special is certainly eye-catching. Close up she’s perhaps smaller than you had imagined but there’s an instant sportiness and sturdiness about the Pitts. It’s an aerobatic icon that’s for sure – right down to those distinctive wheel covers the Americans call wheel pants!

Once briefed on the flight and aircraft controls strapped in to the front cockpit and ready it’s time to taxi for take off. With that 200hp Lycoming engine you’ll quickly be in the air and you’ll soon be looking down on the snaking lines of traffic on the M5. What happens next is where the magic begins…

As soon as you’ve reached the correct altitude your expert aerobatics pilot instructor will show you the moves. This is what the Pitts is all about. This plane does what you tell it to immediately. Certified to +6 and -3G you can push the Pitts to the limits yet still feel totally in control. And you’ll get a feel of that when you are handed the controls to fly yourself!

And one more thing these Pitts Special flights from Staverton boast superb views over Gloucestershire. You’ve got the Malverns the Severn Estuary and the Cotswolds – and they’re all the better when viewed during inverted flight! 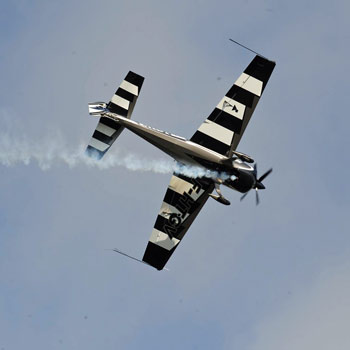 Introducing the Extra 330 – aerobatics in the extreme! This amazing little plane resides at White Waltham Airfield in Berkshire and is on standby to take you on the most incredible flight filled with aerial stunts. Have you got the bottle to fly high in the Extra 330?

White Waltham is home to the long-standing West London Aero Club and British Aerobatics. This airfield has flying in its blood going way back to when the de Havilland family set up their flight training school in 1935. Still today there’s a real buzz about the place. There’s a passion for flight – and in particular aerobatics – that makes a visit to White Waltham an exciting prospect.

One thing that really stands out is the pilot team. With many many flying hours amongst them the skill-set is pretty incredible. Your instructors are champion aerobatics pilots long-established flying display pilots and even formation flying specialists all of whom will be only too pleased to show you the ropes!

And indeed you’ve got the perfect plane in the Extra 330LX. This Lycoming-powered low-wing aircraft is the best in class for aerobatics and has even been officially rated ‘ultimate’. Capable of +/-10G it’s an impressively agile aeroplane indeed. No wonder they are such crowd-pleasers at airshows around the world.

A big advantage of the tandem-configured Extra 330 is that it is of course dual-controlled so you’ll be sitting in front of your own set of controls. If you’re up for it your pilot instructor might well invite you to take those controls mid-flight to have a go at flying the aerobatic Extra 330 yourself. Thrilling stuff!

As for the moves your pilot will be demonstrating they’ll be as gentle or as extreme as you dare. If you can stomach it your pilot might execute a short sequence of aerobatic figures just like you’d see at an air show but this time you are the show! We are offering both 20 and 30-minute Extra 330 aerobatics flights out of White Waltham filled with spins and loops galore.