Laura’s London: Stanley Kubrick: The Exhibition – The Design Museum – Our Review – Is It Worth Going? 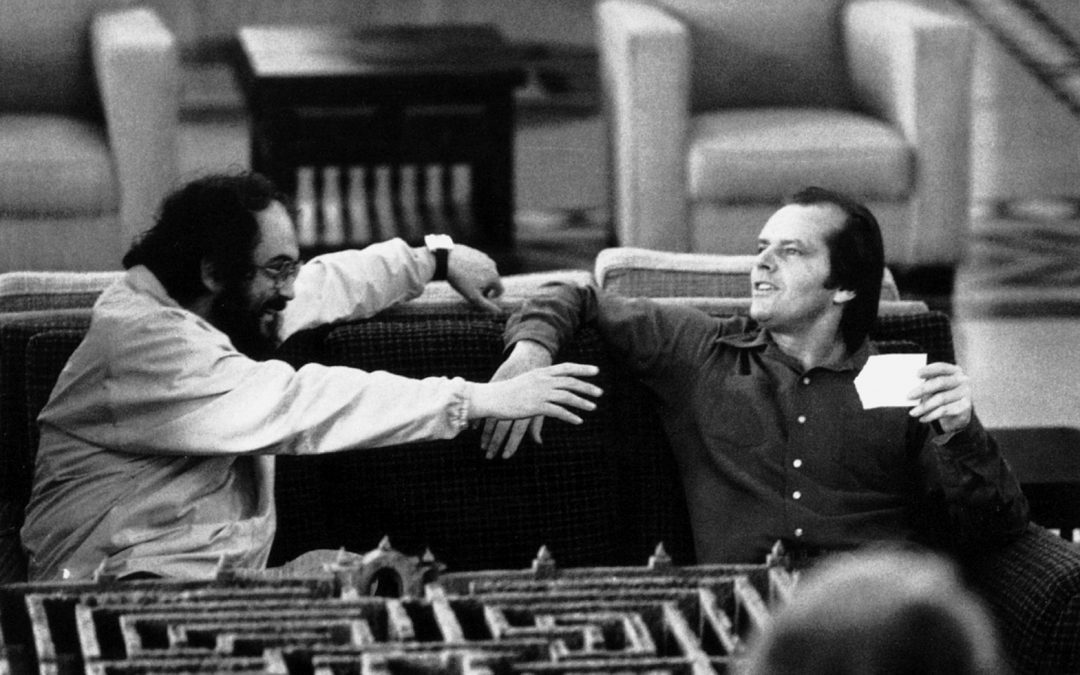 Stanley Kubrick: The Exhibition has opened at The Design Museum in Kensington and is on until 15 September 2019. A global touring exhibition which started its journey in 2004, has at last reached London where so many of Kubrick’s movies were filmed.

Marking the 20th anniversary of Stanley Kubrick’s death, the exhibition explores his unique command of the whole creative design process of film making, from storyteller to director to editor with around 700 objects on display. His widow, Christiane, commented that she thought the presentation at the Design Museum was the best yet. The planning to bring the exhibition to London started over 2 years ago when the Museum was at its old location near Tower Bridge and there was major excitement at the preview show I attended.

This celebration of one of the greatest filmmakers of the 20th century includes unseen material from his genre-defining films including The Shining, 2001: A Space Odyssey, Full Metal Jacket and A Clockwork Orange.

“Nobody could craft a movie better than Stanley Kubrick.
He is an inspiration to us all.” – Steven Spielberg

You enter via this superb example of his one point perspective with a montage of video clips from his classic films.

The exhibition gives you an insight into Kubrick’s mind through rare objects, projections and interviews exploring his special relationship with England and particularly London, as his primary film location and source of inspiration.

Although originally from the Bronx in New York, home for Stanley Kubrick was the quiet countryside of Hertfordshire from 1961 until his death in 1999. His home at Childwickbury Manor in Hertfordshire, which he shared with his wife Christiane, became his workplace where he did his writing, research, editing, and management of production details.

During this period, London served as a source of inspiration and the backdrop to some of his most iconic scenes where he morphed the city into something entirely new each time.

The hotel room, that lead character Dr David Bowman enters at the end of 2001: Space Odyssey was designed using photographs that Kubrick took of his suite and other rooms at London’s Dorchester hotel, where he was staying during filming.

The brutalist architecture of the Thamesmead neighbourhood and Southmere Lake in south-east London became the dystopian stomping ground for Alex and his droogs’ violent tale in A Clockwork Orange. The Brunel University campus in Uxbridge, also designed in the brutalist style, was used as the rehabilitation centre for the troubled young man.

You can see an excerpt from a 1970 Thamesmead promotional video in the exhibition showing the development process from model to construction of a ‘new town’ for Londoners displaced by 1960s slum clearance.

A Territorial Army barracks in Bassingbourn, an abandoned airfield in Enfield and an army latrine at Shepperton Studios became the Parris Island training camp in Full Metal Jacket. But Anton Furst’s masterpiece was to turn Beckton Gas Works near the Isle of Dogs – a derelict coke-smelting plant stretching over 600 acres – into the city of Hue that was destroyed during the Vietnam War. Palm trees were planted and road signs were changed to Vietnamese to achieve the transformation.

For Kubrick’s last completed film, Eye Wide Shut, he turned Worship Street in east London and Hatton Garden near the City, into parts of Greenwich Village in New York. Madame Jojo’s cabaret club in Soho was used as New York’s Sonata Café and even Hamleys toy shop made an appearance in the film’s finale.

Manuel Harlan (the son of Kubrick’s executive producer and brother-in-law Jan Harlan) was asked to research and photograph possible locations. He compiled thousands of images including this panorama of Commercial Road in east London. In the end, the majority of filming was done at Pinewood Studios rather than on location. 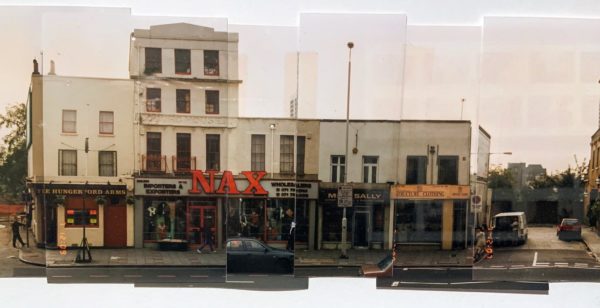 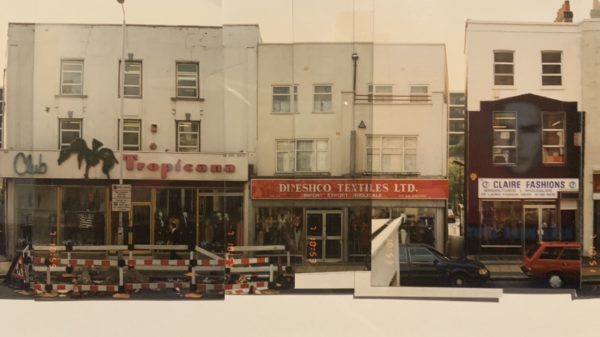 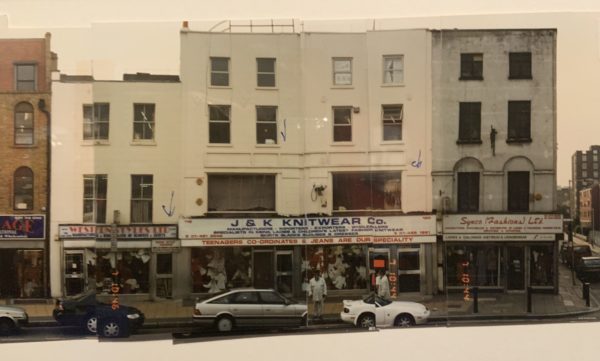 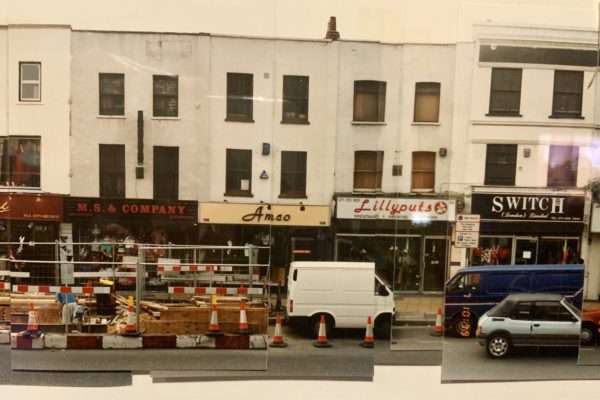 Kubrick worked as a photographer for Look magazine after leaving school. He became the youngest staff photographer ever hired by the magazine and stayed until 1951. (A selection of the 900 photographs by Kubrick that were published in his time at Look is displayed on the first floor of the museum atrium.)

Kubrick rented equipment to make his first short film and taught himself how to use it. Day of the Fight (1951) was based on a commission from Look magazine about Walter Cartier, who became a boxing champion after the second world war.

For Kubrick, the editing room was what really mattered. This was where he could concentrate without distractions, putting together scenes he had filmed, often at great length. As he explained, “I think I enjoy editing the most. It’s the nearest thing to some reasonable environment in which to do creative work.”

Napoleon has his well-researched film that was never made. You can see his file card cabinet and part of Kubrick’s personal Napoleon library on display. His widow mentioned there were many more boxes still at home. 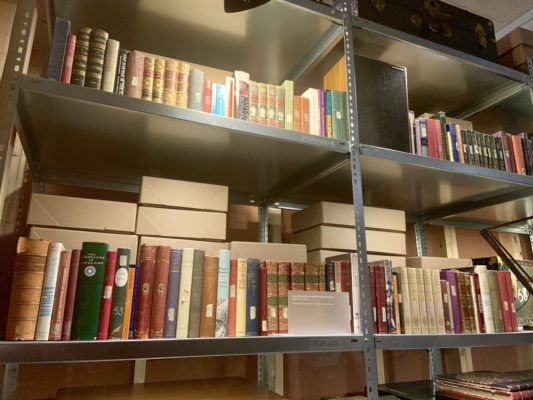 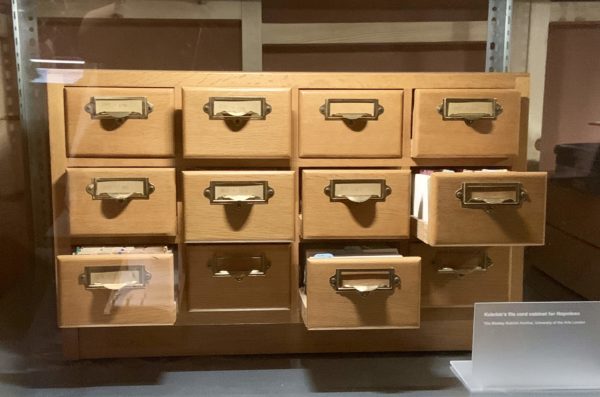 Released in 1960, this was Kubrick’s only attempt at making a traditional Hollywood film. He explained, “It’s the only picture I’ve worked on where I was employed – and in a situation like that the director has no real rights, except the rights of persuasion… and I’ve found that’s the wrong end of the lever to be on.”

Lead actor Kirk Douglas had fallen out with the original director Anthony Mann and hired Kubrick as a replacement.

This was the first screenplay that Kubrick had written himself, adapting the slang from Anthony Burgess’s novel and the protagonist Alex’s first-person narrative, famously portrayed in the film by actor Malcolm McDowell.

The film was an immediate box office success although critics denounced it as a celebration of mindless violence and sexual abuse. 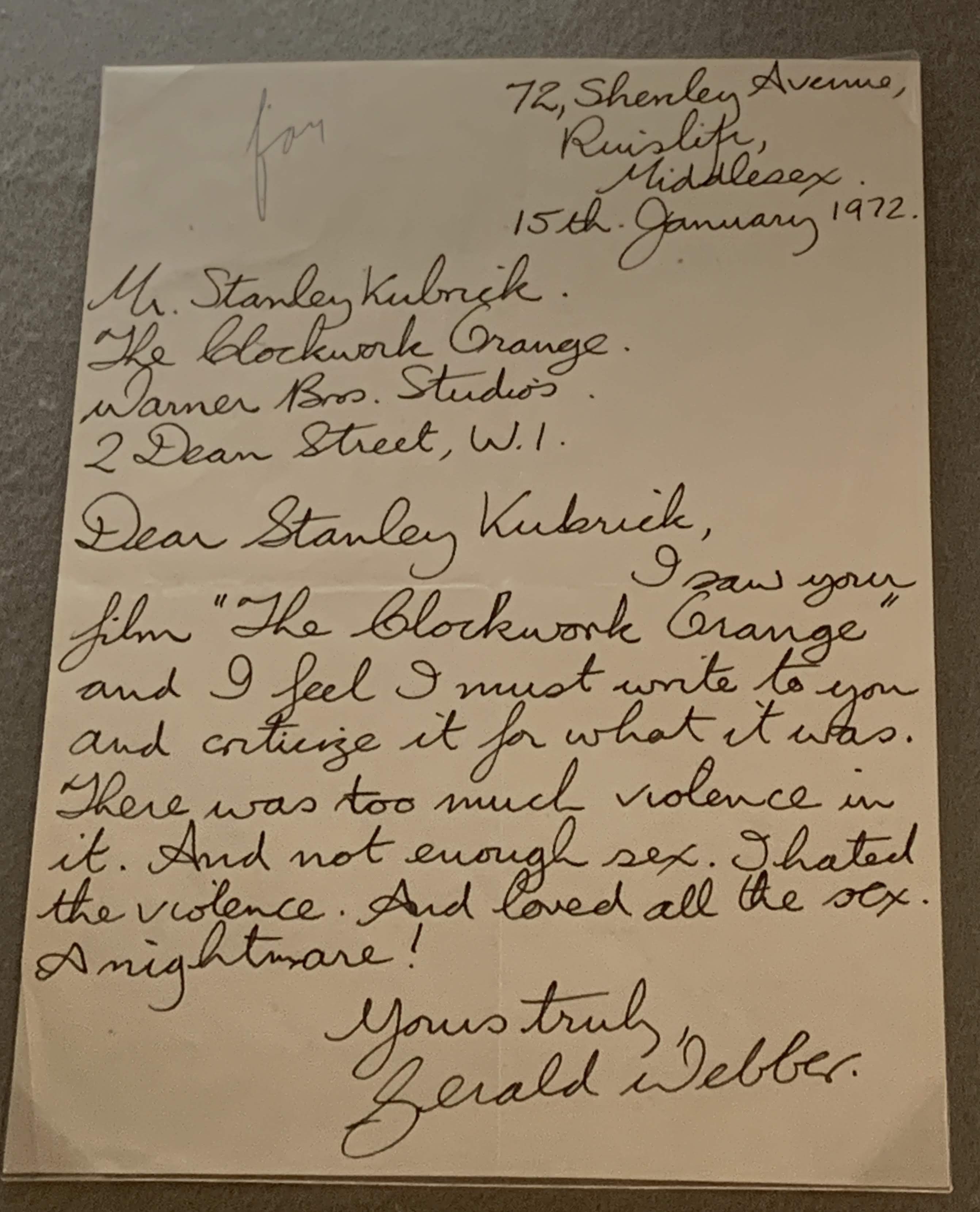 In 1974, when Kubrick received threats against his family, he pulled the film from UK distribution. It wasn’t officially screened here again until after his death.

Alongside Jack Nicholson and Shelley Duvall, another major character of Kubrick’s 1980 adaptation of Stephen King’s novel The Shining (published 1977) is the Overlook Hotel. This was a faithful reconstruction of the facade of The Timberline Lodge, a ski resort in Oregon, USA, at the Elstree and Pinewood Studios. The Overlook lobby and Colorado Lounge were inspired by the Ahwahnee Hotel in Yosemite National Park.

The film was also notable for the use of Steadicam, which had recently been invented. Kubrick employed it extensively throughout the year-long shoot to achieve flowing scenes that would otherwise have been impossible.

And these were my favourite costumes in the whole exhibition.

The Kubrick film I’ve probably watched the most is Full Metal Jacket so it was really interesting to read about the production process in London, and to see iconic original props.

I never went to see Eyes Wide Shut at the cinema as I had no interest in watching a married couple get it on.

Renowned set designer Sir Kenneth Adam, who was the first production designer to be knighted, designed the war room for Dr Strangelove. Its circular green baize tabletop was a calculated reference to the gambling tables of a casino.

I don’t profess to be a Kubrick expert and I’ll admit I had never heard of the Barry Lyndon film.

Based on William Makepeace Thackeray’s 1844 novel, The Luck of Barry Lyndon, the film was shot mostly in daylight and candlelight. For the candlelit scenes, Kubrick used a special camera lens originally designed for NASA, which enabled filming in dark conditions.

“I loved the story and the characters,
and it seemed possible to make the transition
from novel to film without destroying it in the process.”
– Stanley Kubrick

Kubrick’s most famous and technically demanding film was the culmination of years of research into how intelligence evolved.

Sir Edwin Hardy Amies was one of the 20th century’s most successful British fashion designers, and probably best known as dressmaker to the Queen for almost 40 years. He was asked to design the costumes for the Space Station 5 sequences of 2001: A Space Odyssey, including Pan American and Aeroflot airline crews, and outfits for the Soviet scientists encountered by Dr Heywood Floyd on his journey to the Clavius Moon Base.

The famous first shot inside the spaceship Discovery shows astronaut Frank Poole jogging in a centrifuge. The set consisted of a huge revolving drum, around 12 metres high, which served as the Discovery’s main compartment. This massive feat of engineering took British manufacturer Vickers-Armstrong six months to build and cost more than $750,000 (£580,000). You can see a model on display here and it’s the only known remaining item from the original set.

Here are a few more photos from the exhibition. 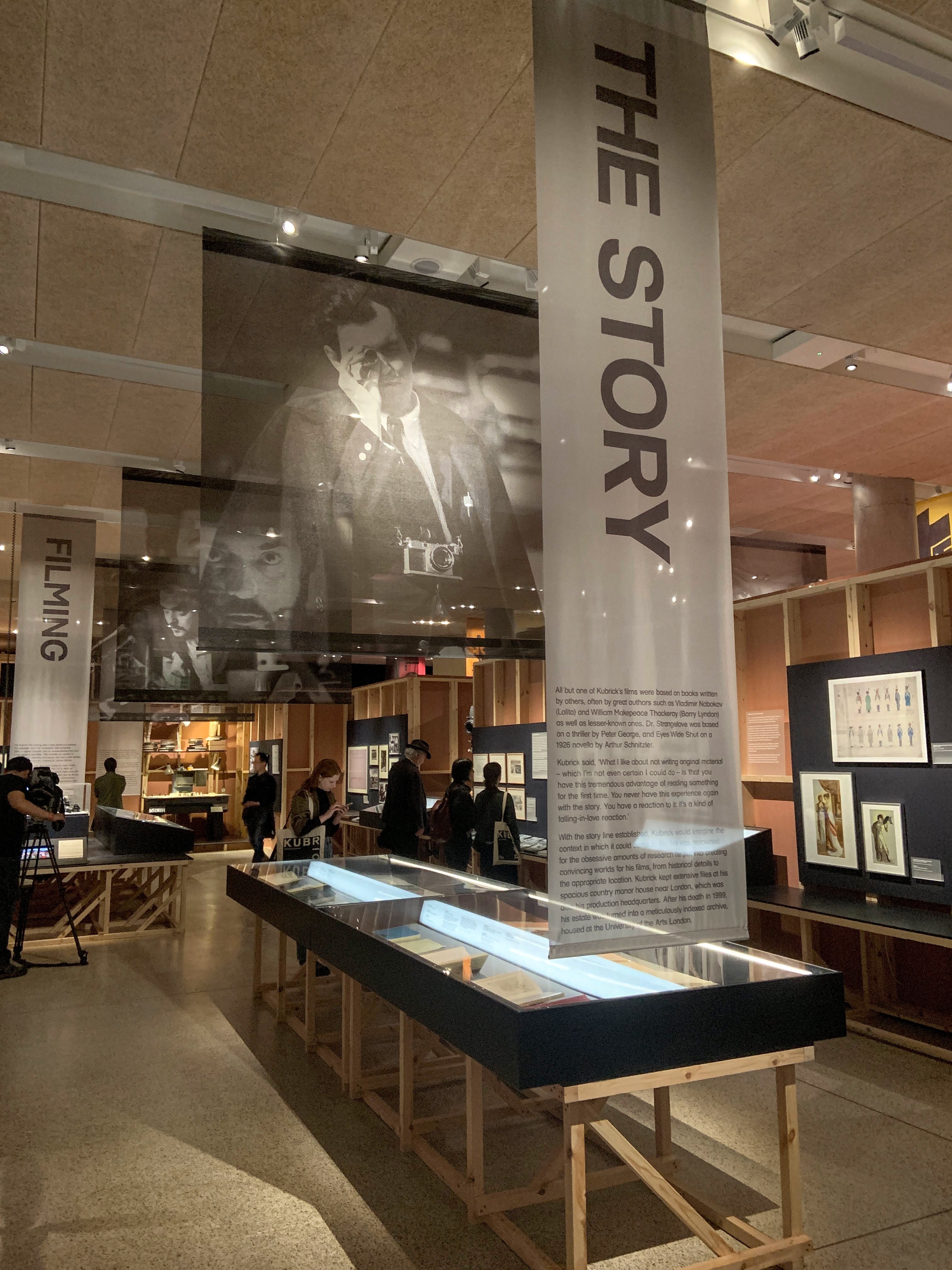 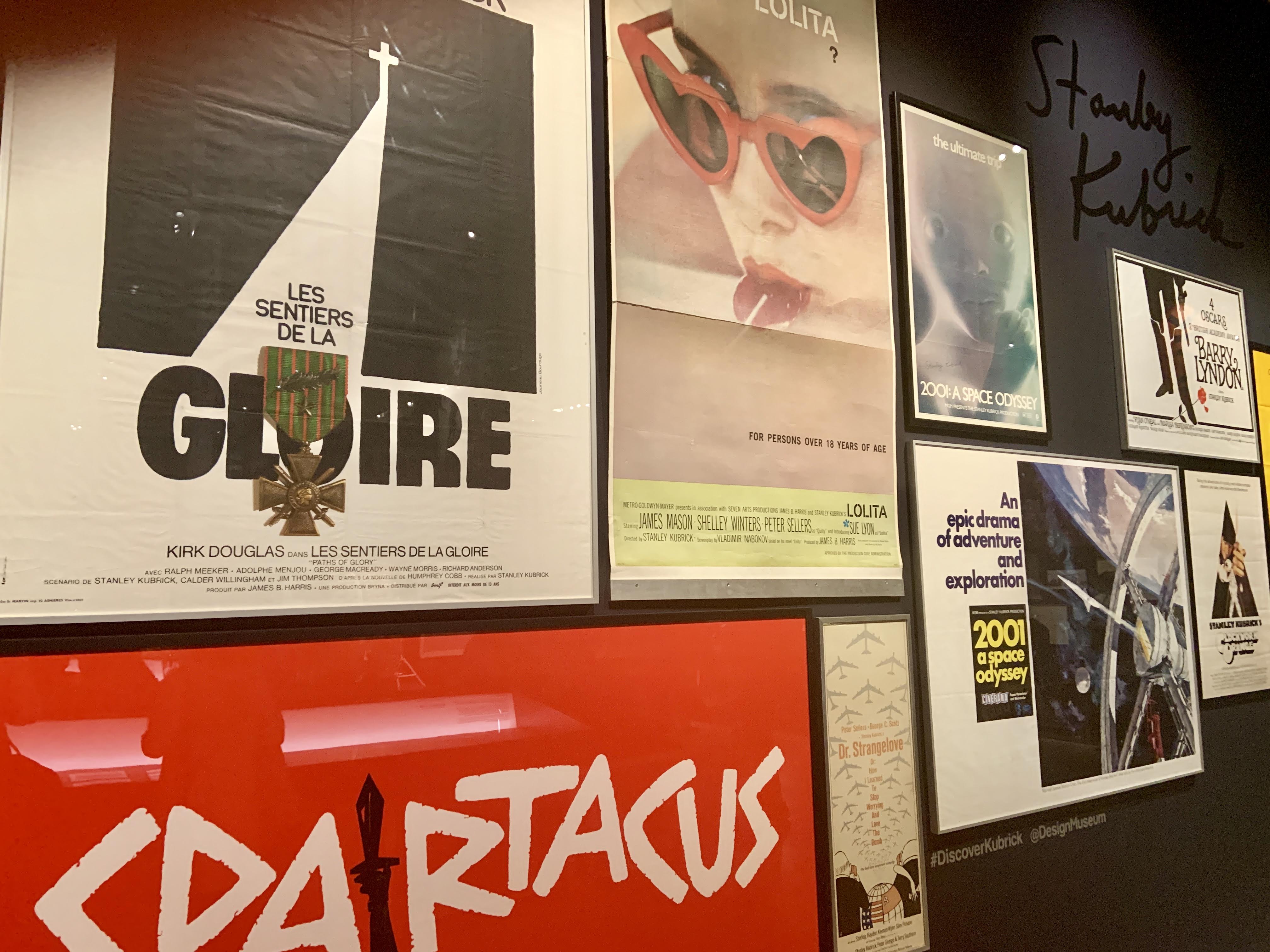 On the first floor of the museum atrium, you can see a display of Kubrick’s street photography for Look magazine from 1945 to 1950.

His father gave him his first camera – a Graflex, also displayed here – when he was 14. His professional photography career began at 21 when he sold a photo to Look magazine for $21.

A definitive two-month Kubrick season at BFI Southbank will run from 1 April – 31 May 2019 (featuring screenings of Kubrick’s feature films and his three short films), with a complimentary season of ‘Kubrickian’ films running alongside it. The Design Museum will also have a number of events held at the museum as part of the Kubrick Now Events Programme. The BFI re-released A Clockwork Orange in cinemas UK-wide from 5 April.

Age guidance: The general age guidance is 12+. However, some of the exhibition film rooms contain scenes of an adult nature and are not suitable for those below the age of 18.

Laura’s London: Stanley Kubrick: The Exhibition – The Design Museum – Our Review – Is It Worth Going? – Londontopia – The Website for People Who Love London