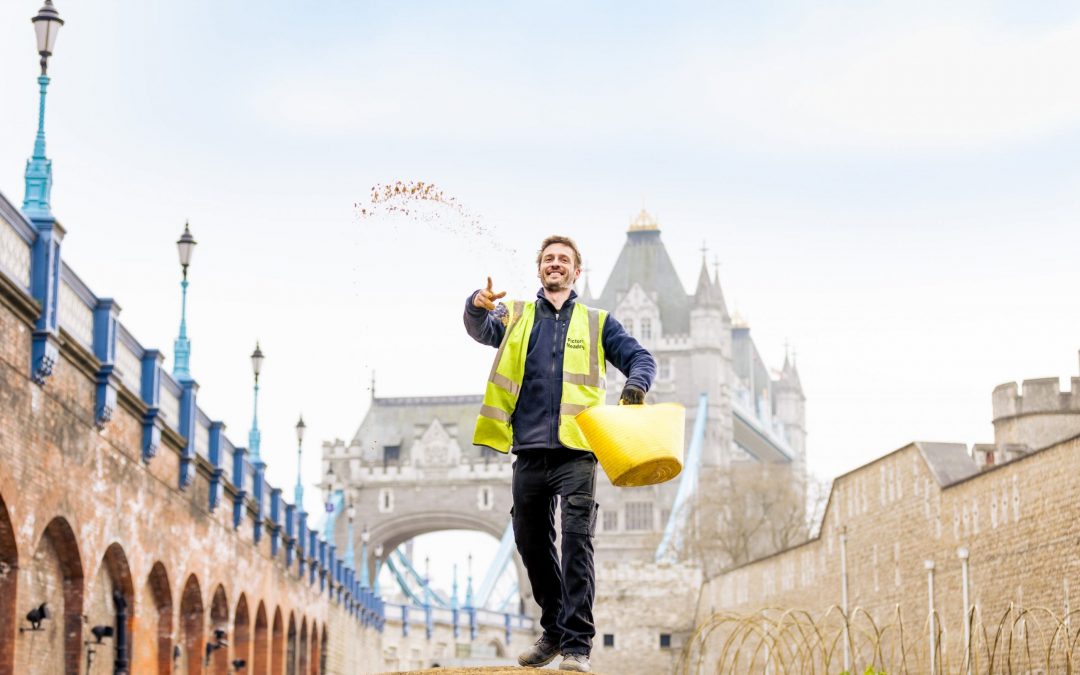 The sowing of more than 20 million seeds in the Tower of London’s moat to create a “Superbloom” meadow has begun.

Cornflowers – with their burst of blue when in full flower – have been specifically chosen to hark back to a time when the historic fortress’s trench was filled with water, while the other wildflowers will include red poppies and yellow corn marigolds.

With favourable weather, the spectacular floral display, in honour of the Queen’s Platinum Jubilee, will flourish at the start of June to coincide with the national celebrations of the monarch’s milestone.

Nigel Dunnett, professor of planting design and urban horticulture at the University of Sheffield, has meticulously picked the wildseed and garden plant combinations to heighten the colour effect and extend the season through the summer and beyond.

Professor Dunnet described the Superbloom as the most “thrilling” project he had been involved in.

He added: “It has been a real combination of art and science to develop the final planting scheme for the moat.

“With the seeds now going into the ground, I can’t wait to follow their progress, from the first green shoots emerging within weeks, through to the full spectacle of the amazing ocean of flowers filling the moat in the summer.”

Sunflowers, cosmos and rudbeckias will flower into early autumn, and the snapdragon-like fairy toadflax and baby’s breath will bloom at the very beginning of the summer.

Gardeners began scattering the seeds by hand, and the sowing is expected to last a week.

The horticultural experts have had to take into account where the shadows of the tower fall when planning where to place certain seeds.

Extensive landscaping work prepared the moat, with new winding paths edged in woven willow, and The Nest willow sculpture by artist Spencer Jenkins in the north-east corner, offering a vantage point for the display and Tower Bridge.

Some 10,000 metric tonnes of soil have been shifted into place on a huge conveyor belt and deposited in the trench.

Tom O’Leary, director of public engagement at Historic Royal Palaces, said the collaborative idea had been years in the planning.

“As the seeds go in the earth over the next few days, we are now directly collaborating with nature – which we hope will look kindly on us as we wait for the flowers to burst into life for June,” he said.

As part of the experience, a family-friendly slide will allow visitors to shoot down into the moat on a mat from one of four lanes and follow the route through the display, which includes a specially commissioned sound installation.

Plants have also been chosen to attract bees, butterflies and other pollinators.

The moat was designed in the 13th century to defend the fortress and has been used as a medieval orchard, a grazing ground for Victorian livestock, and as allotments during the Second World War.

When the display ends in September 2022, the new natural landscape created to support it will remain there as a permanent Jubilee legacy.

Tickets for Superbloom are on sale at www.hrp.org.uk