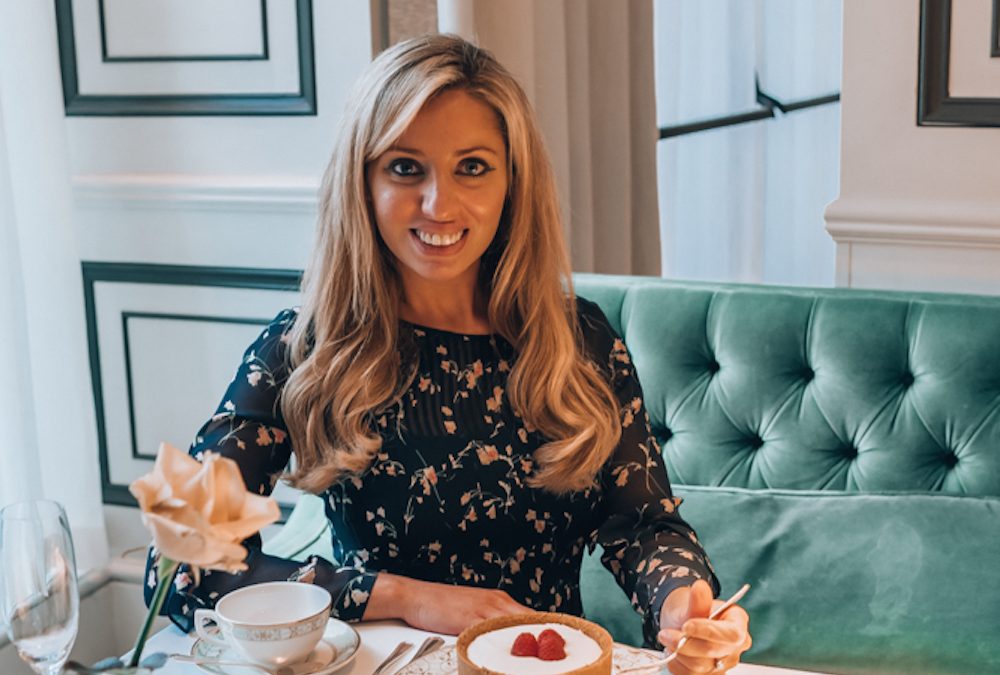 I was invited to attend JW Marriott Grosvenor House London food safari as part of a press event and my food was complimentary. I was not paid to attend and was not under contractual obligation to write this blog post or create content on any platform.

I remember about eight years ago attending a grand charity dinner at a London hotel… row upon row of beautifully decorated tables in the grandest ballroom I’d ever seen in my life! Fast forward to now and I was invited back to the JW Marriott Grosvenor House London, the biggest and and one of the grandest hotels in London! With memories of the grandeur of that epic ballroom, I knew I was in for a treat we would be experiencing a food safari, sampling the different restaurants around the hotel. 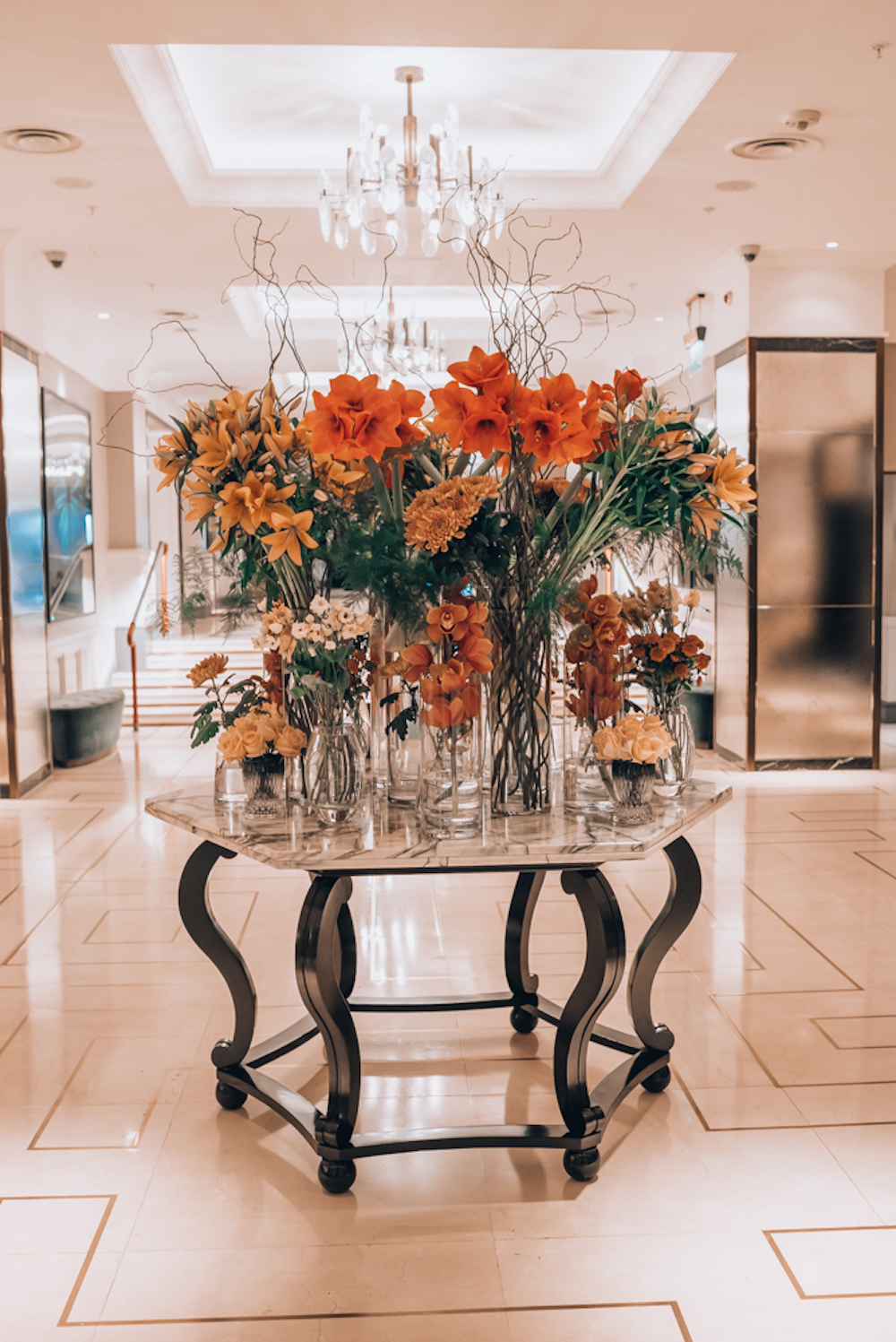 First established in 1929, the hotel is currently celebrating its 90th birthday … but you wouldn’t be able to tell that this Grand Dame is just ten years shy of a centenary. A recent refurbishment has the Mayfair-located hotel looking totally brand new! 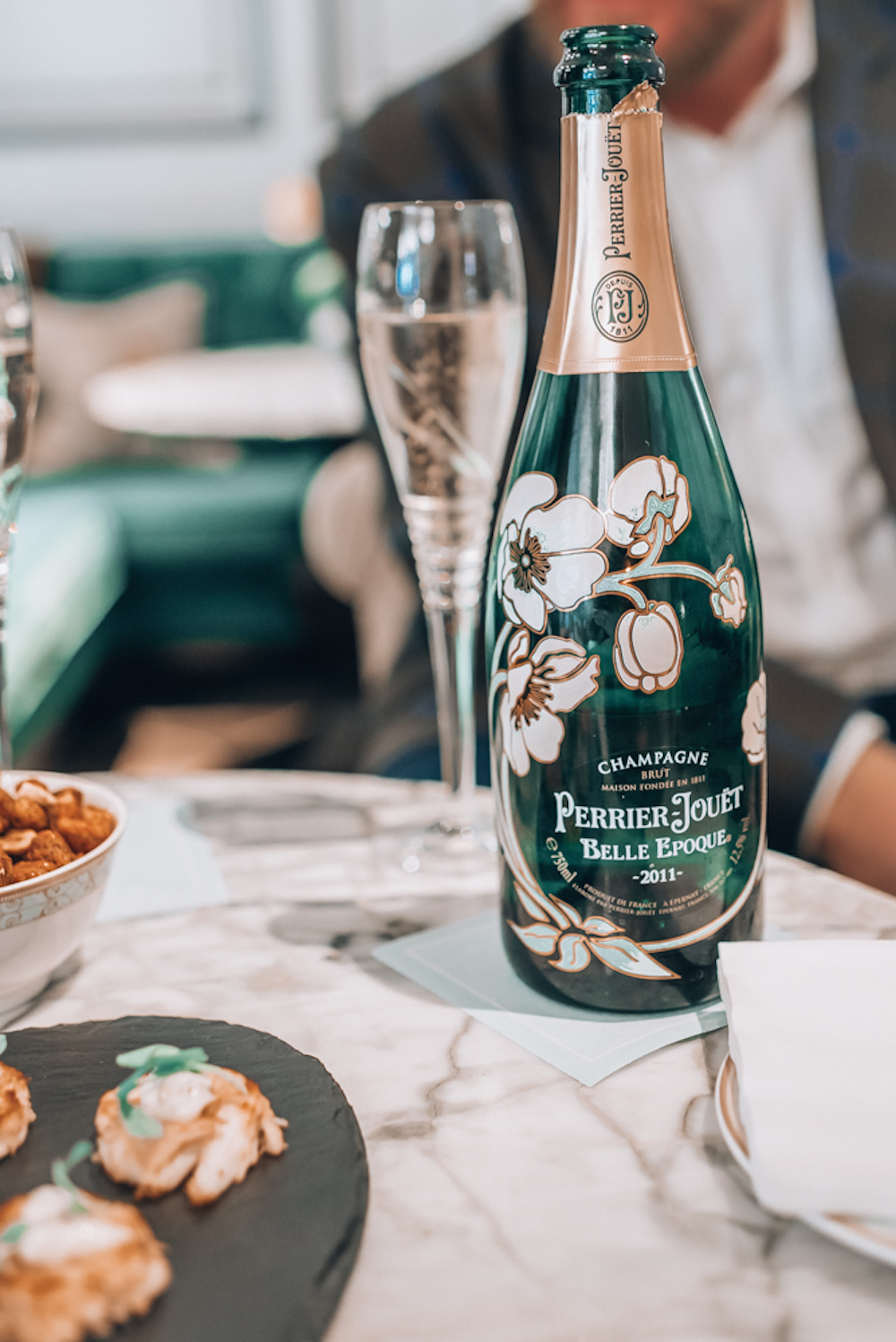 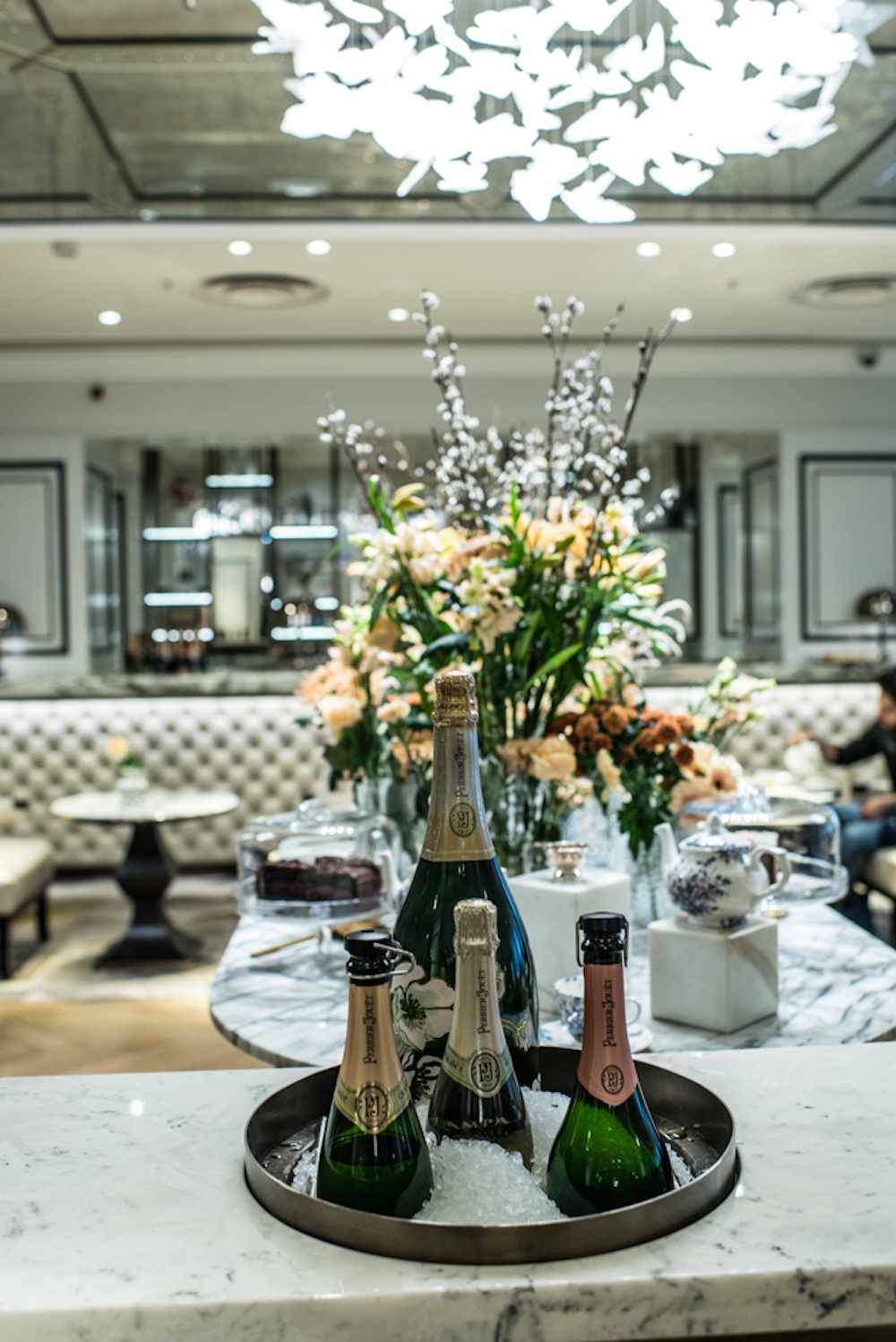 Our day started in the utterly elegant Park Room, so named for the view overlooking Hyde Park, it was probably my favourite room of day as the pretty feminine light colours and green hues mimicked the nearby Royal Park. As we started on the canapés, I chatted to the other influencers with eager anticipation for our foodie day before an introduction (or re-introduction) to the hotel’s house champagne Perrier-Jouët. I’m no stranger to the house, I’ve even visited their cellars in the Champagne region. I already knew about the association of the champagne with the arts and about the gorgeous bottle design but one thing I didn’t know was Oscar Wilde’s fondness for the champagne … he even ordered cases to his prison cell! 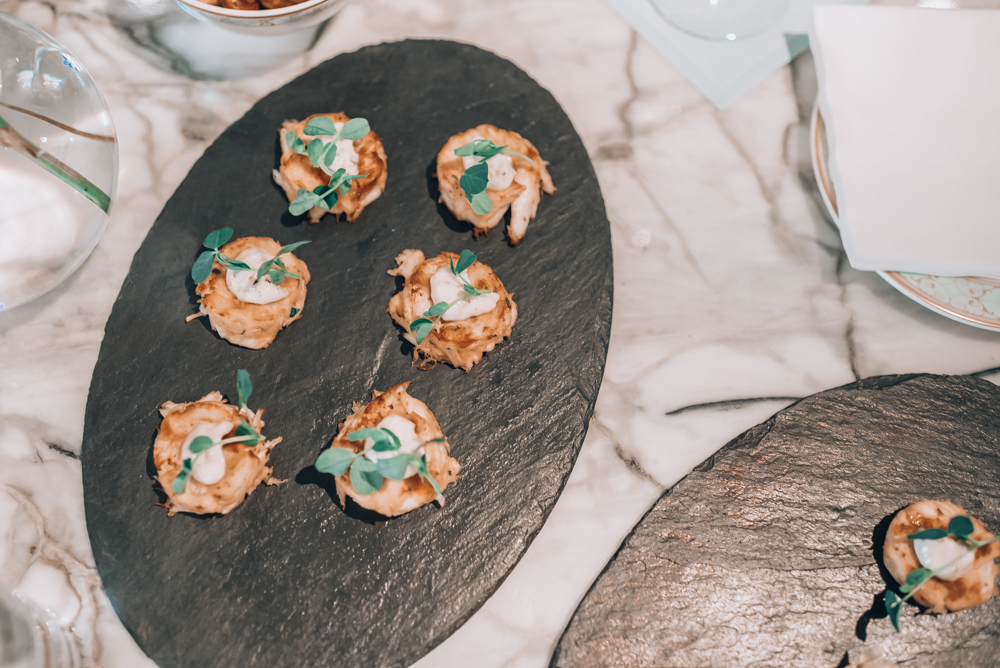 As well as a place for all-day dining, The Park Room is also the venue for the hotel’s famous afternoon tea … of which over 100 covers per day are served! Named Anna’s Afternoon Tea, as a nod to the Duchess of Bedford famous for having started the tradition of the meal between lunch and dinner. 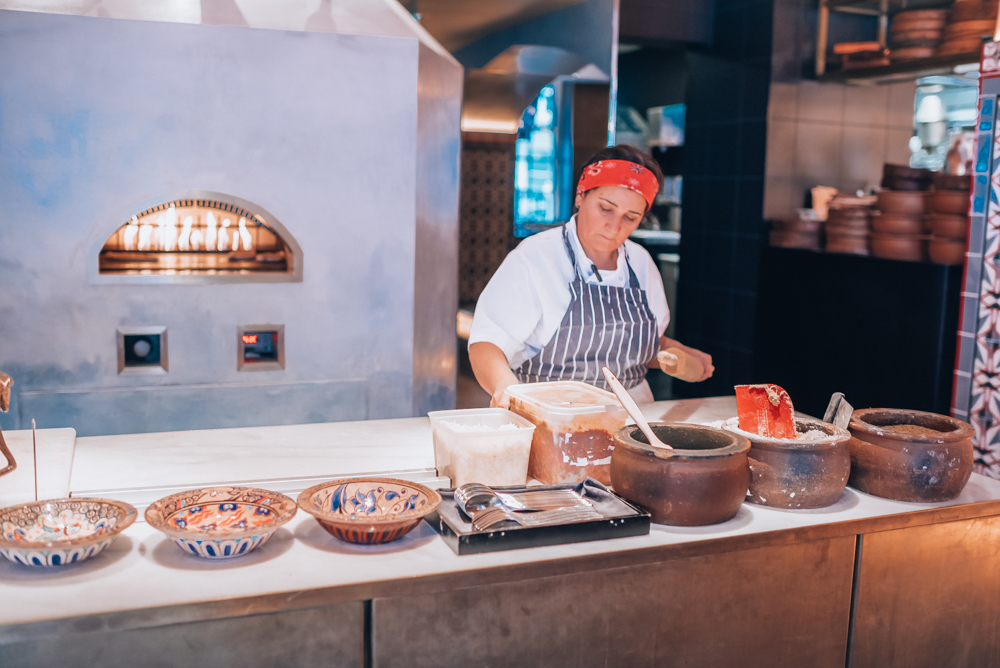 Finishing up in the Park Room, it was time for the next stop on our safari and we headed to the hotel’s Turkish restaurant, Rüya London. Restauranteur Unut Ozkanca’s drew inspiration from his heritage in Istanbul for the menu at his original Rüya in Dubai which features dishes from the Anatolian region – the concept is mimicked here with Chef Patron Colin Clague, who has also worked at Jean Georges, Zuma and Rüya Dubai, at the helm 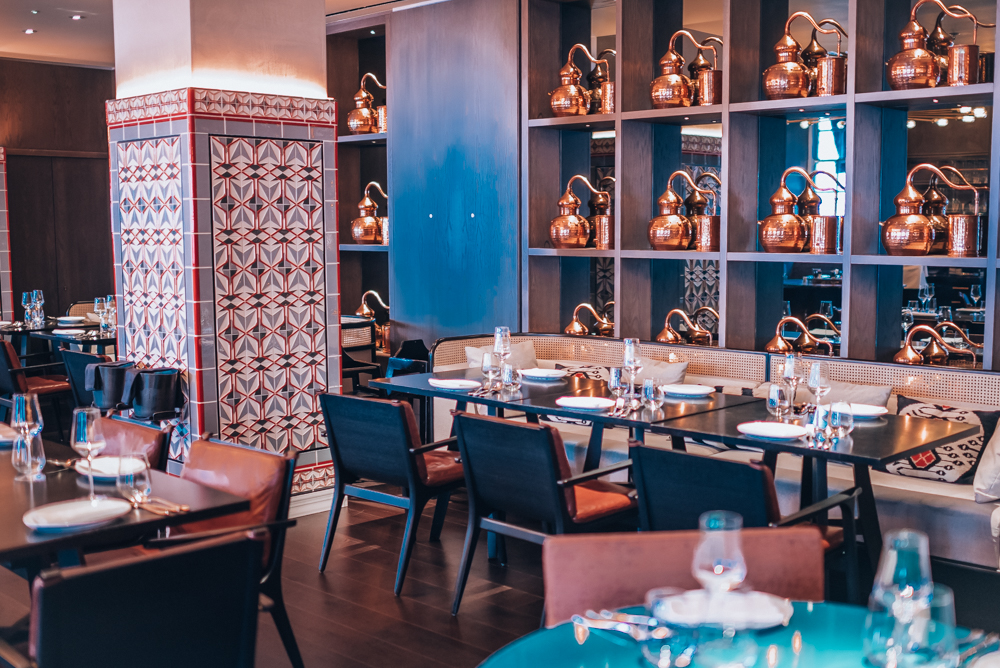 The interiors are super stylish with Middle-Eastern themed tiles, brass fittings and lighting from Conran and Partners plus an open kitchen with the smells of freshly baked bread floating out. The restaurant even has a separate entrance so you can walk straight in of the street and you’d barely know you were in a hotel – the room was actually once a branch of Barclays bank hence the length of the space. 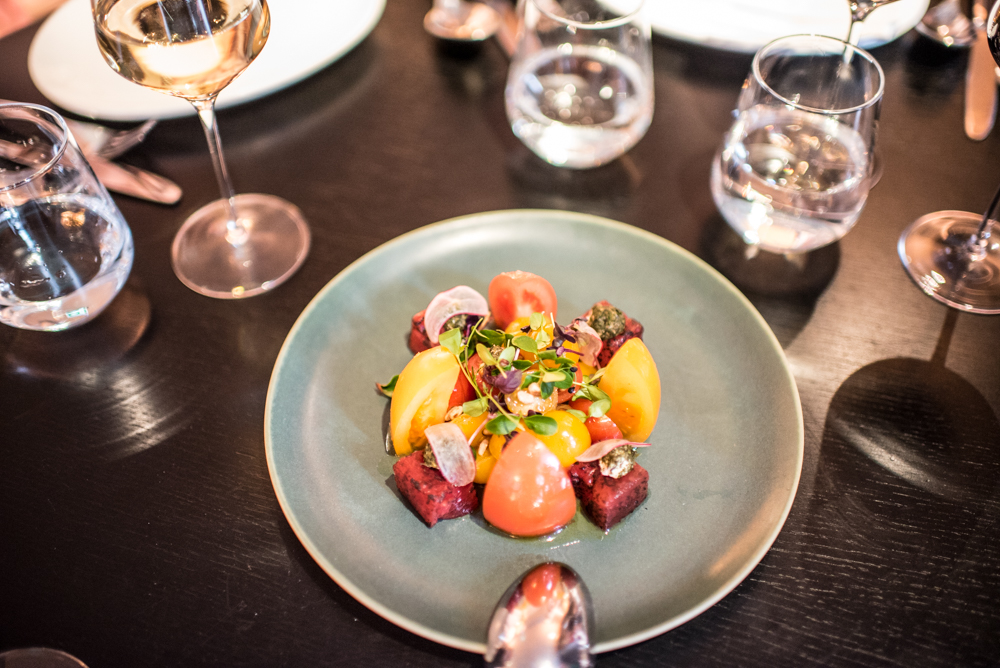 Divided into different sections, the menu gives you the opportunity to try different elements of the cuisine. One of my favourite ways to dine is mezze-style and we had the opportunity of trying lots of different dishes including burnt watermelon, sheep’s cheese, tomato and pine nuts salad and roasted baby beetroot salad with goat’s cheese and corn bread. 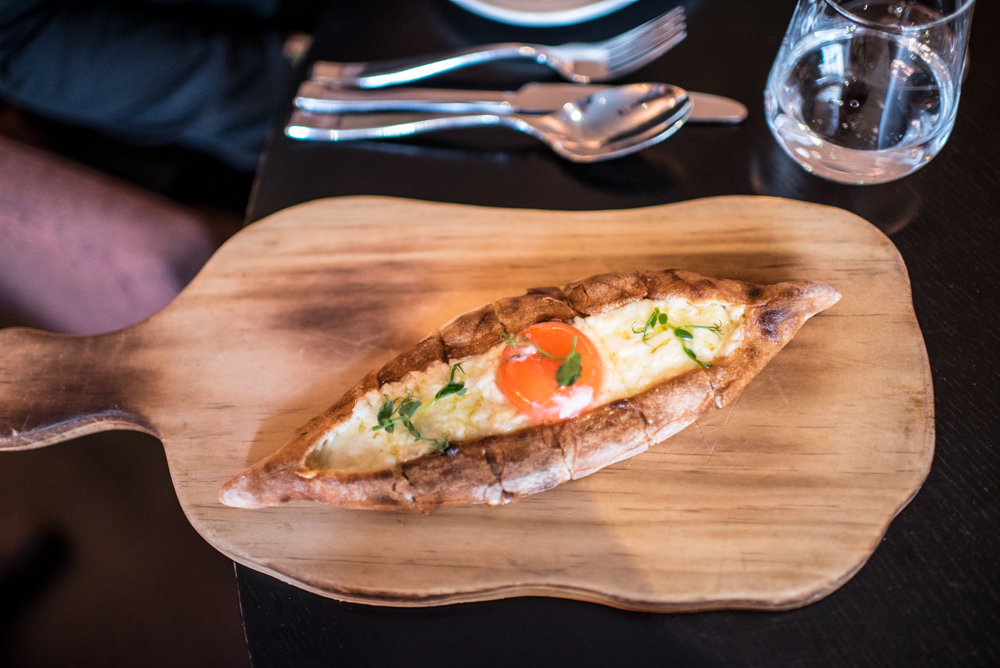 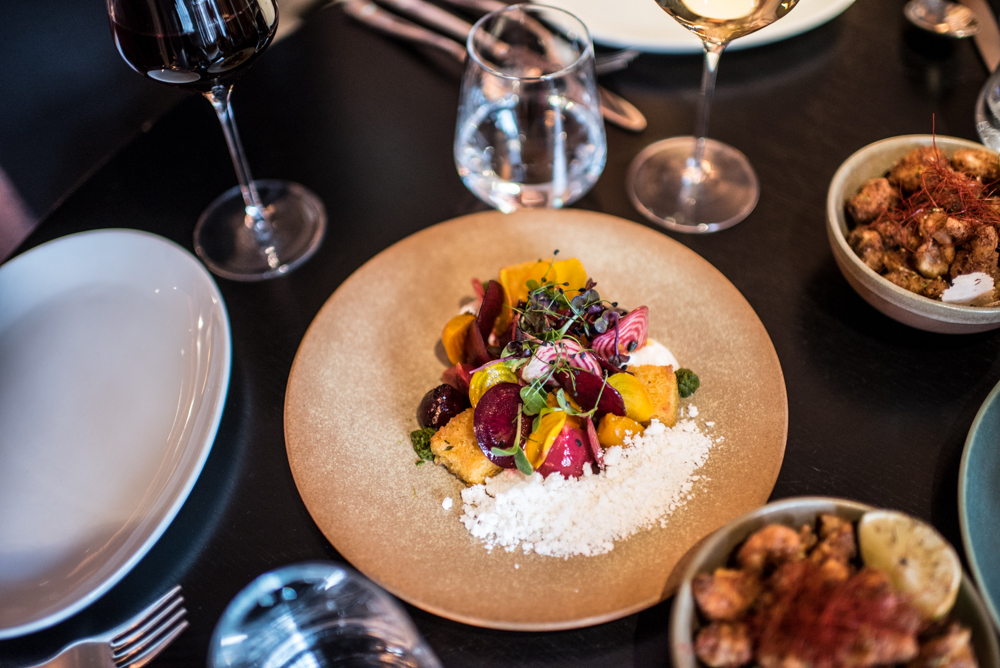 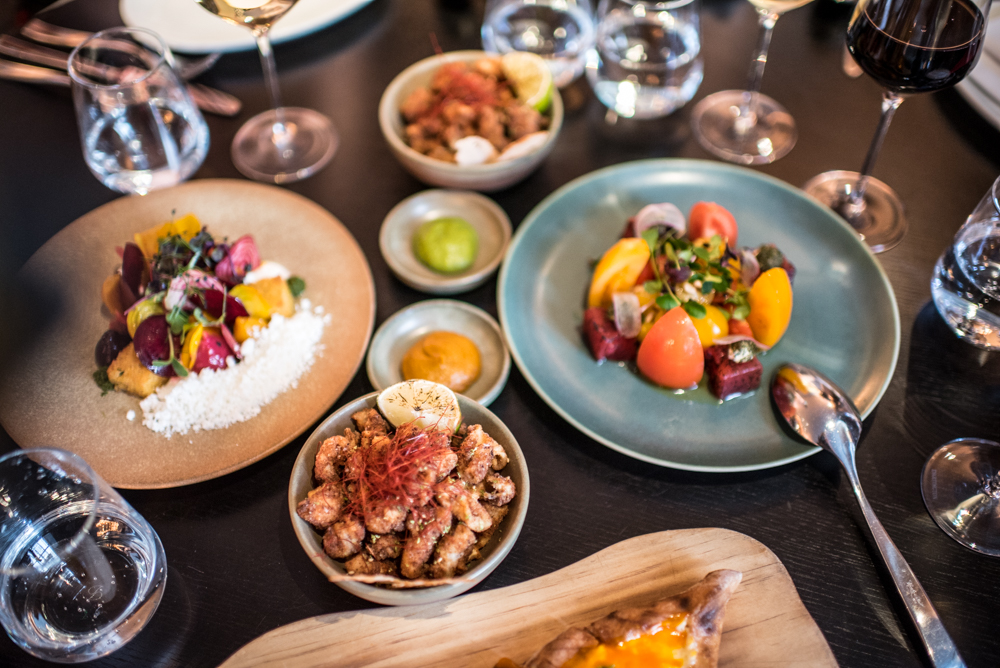 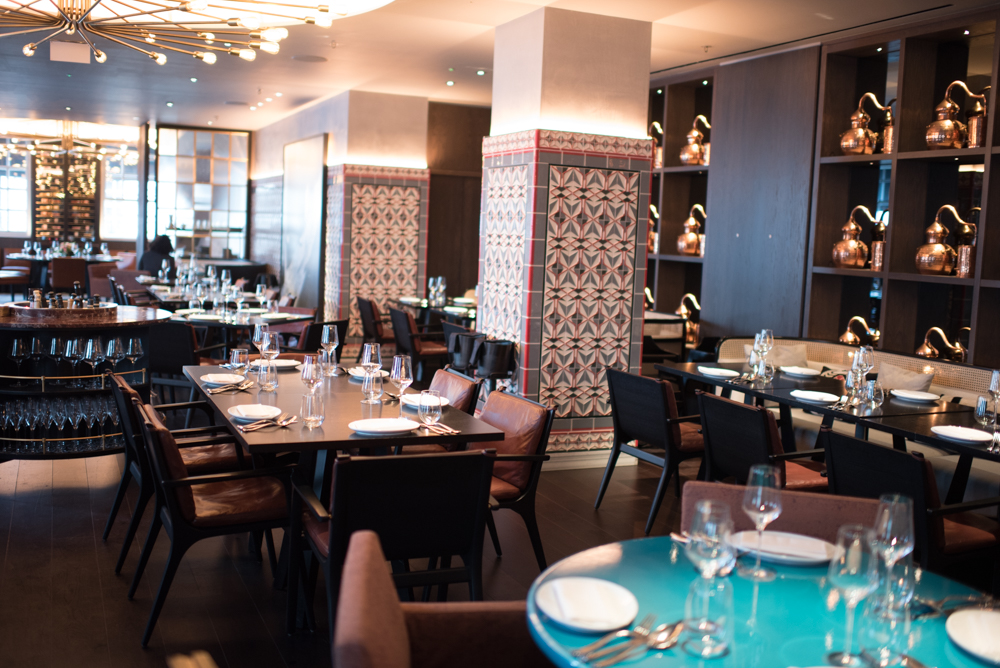 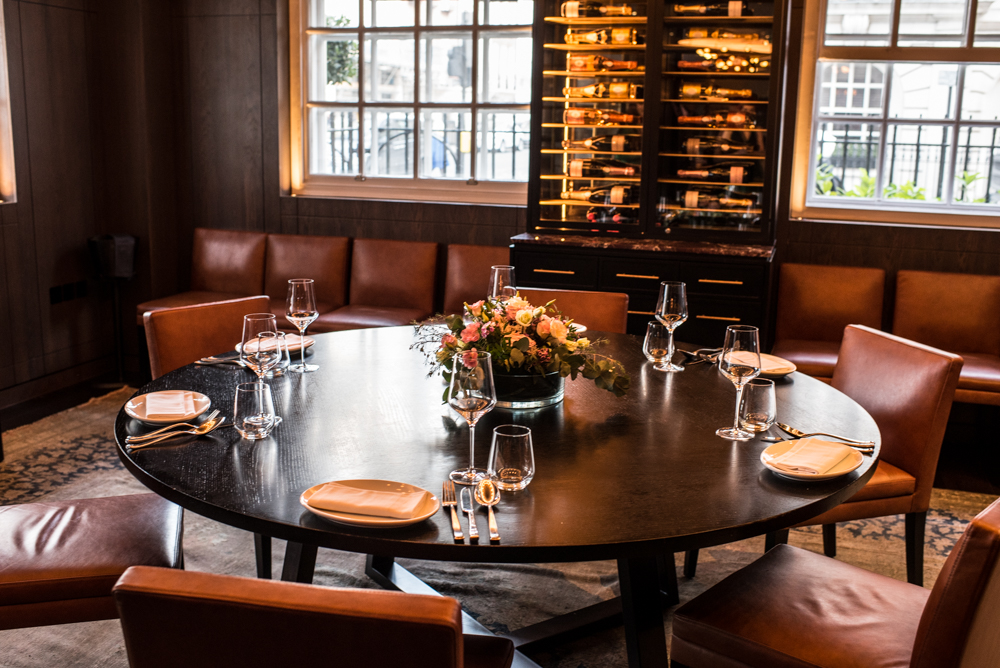 We also had a little look at the private dining room, a gorgeous events space seating about twenty people.

Hungry for main course? It was time for our next stop. 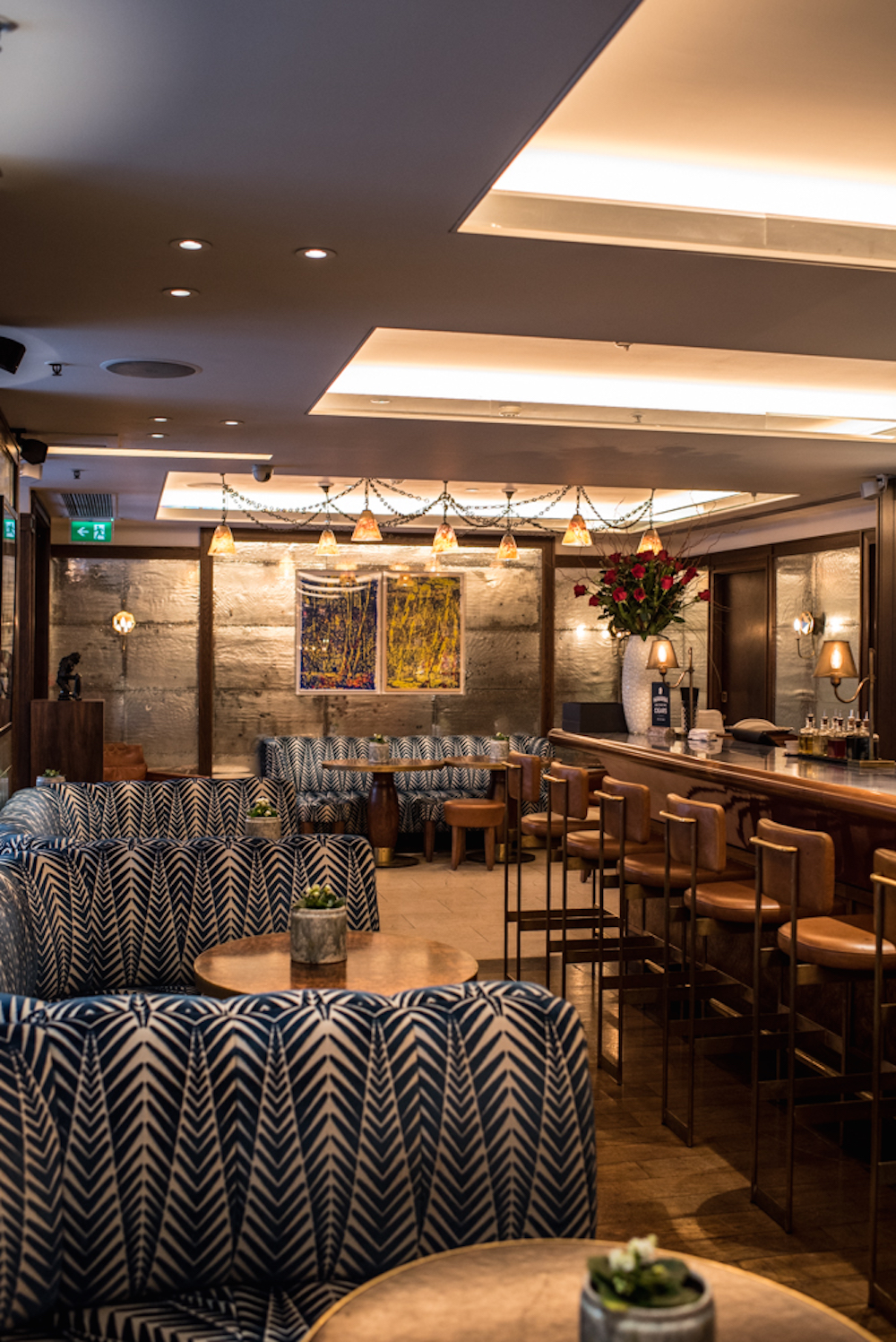 Corrigan’s Mayfair has been highly regarded on the London scene for years with multi-Michelin starred Irish chef Richard Corrigan running the show. The elegant blue dining room is the perfect place for a quintessential British menu that champions seasonal produce. Meat and fish are the star here but I couldn’t resist a spinach and truffle tagliatelle plus their fantastic bread with lots of butter. 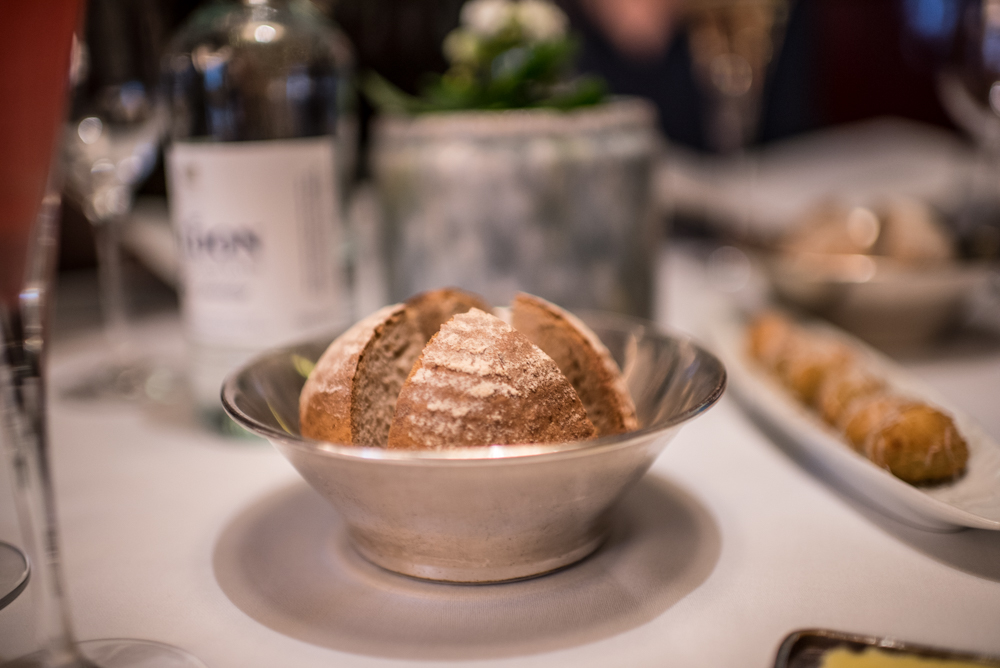 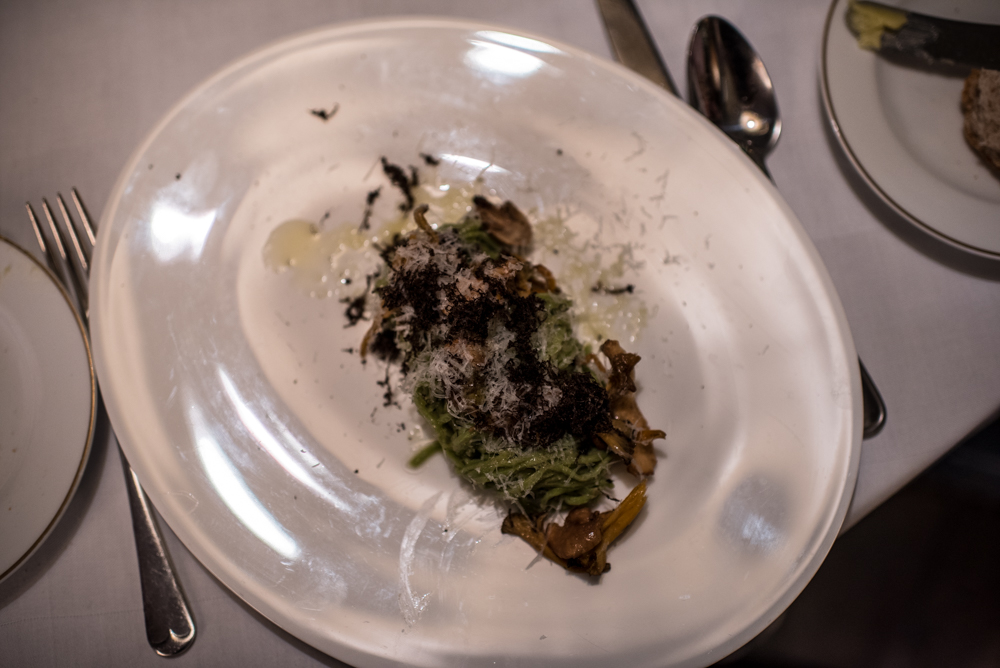 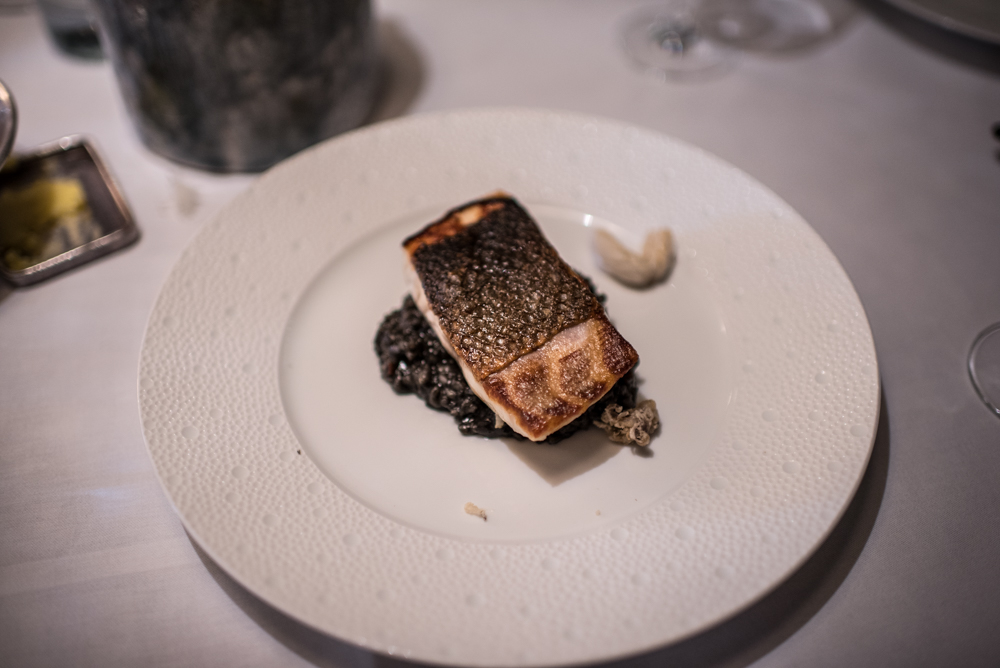 I did have food envy for the sea bass though so that will be my order next time!

However, the course we’d been most excitedly anticipating was the dessert and the promise of the famous JW Cheesecake! 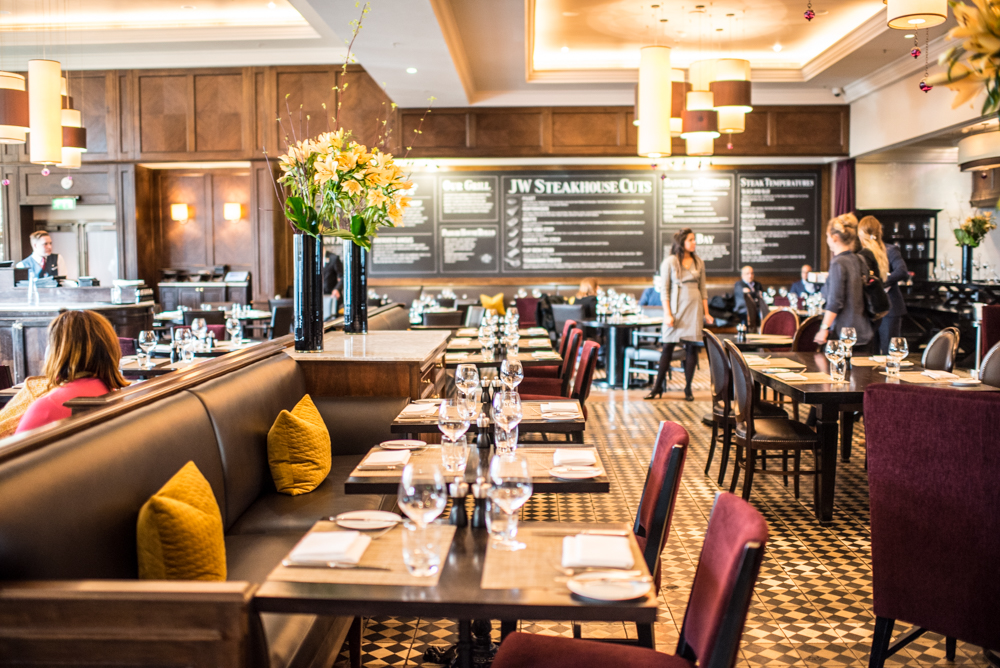 The JW Steakhouse is the hotel’s signature steak restaurant but perfect meat (from the very finest American suppliers) and delicious seafood aren’t all the place is known for. That cheesecake has grown rather a cult status but the other desserts shouldn’t be forgotten either … nor should the Bourbon bar which has the largest selection in London with over 160 rare, pre prohibition, single barrel and small batch Bourbons and very own Jim Beam Single Barrel. 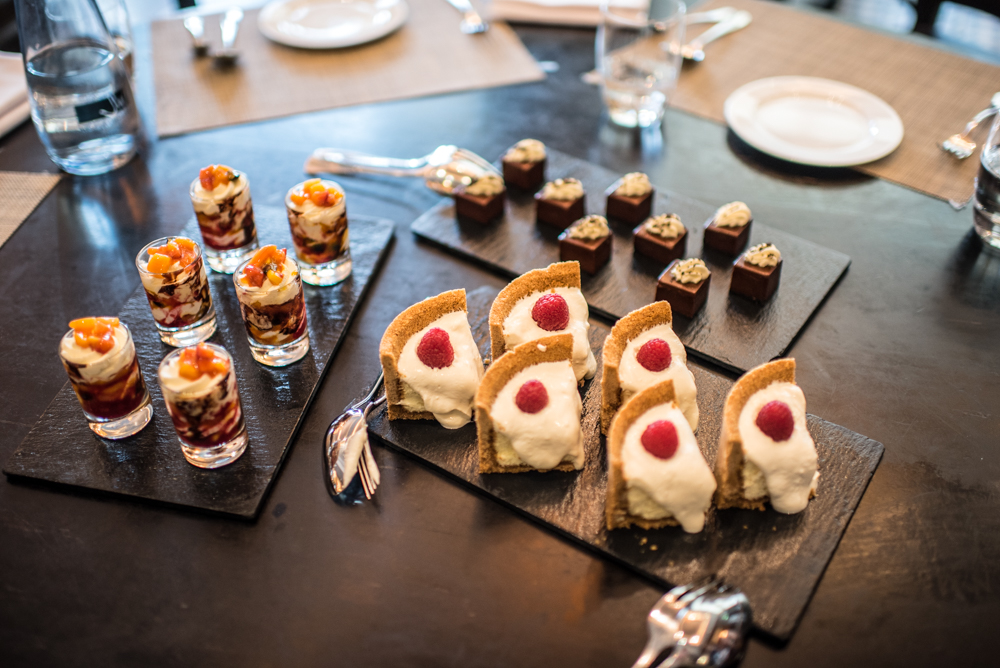 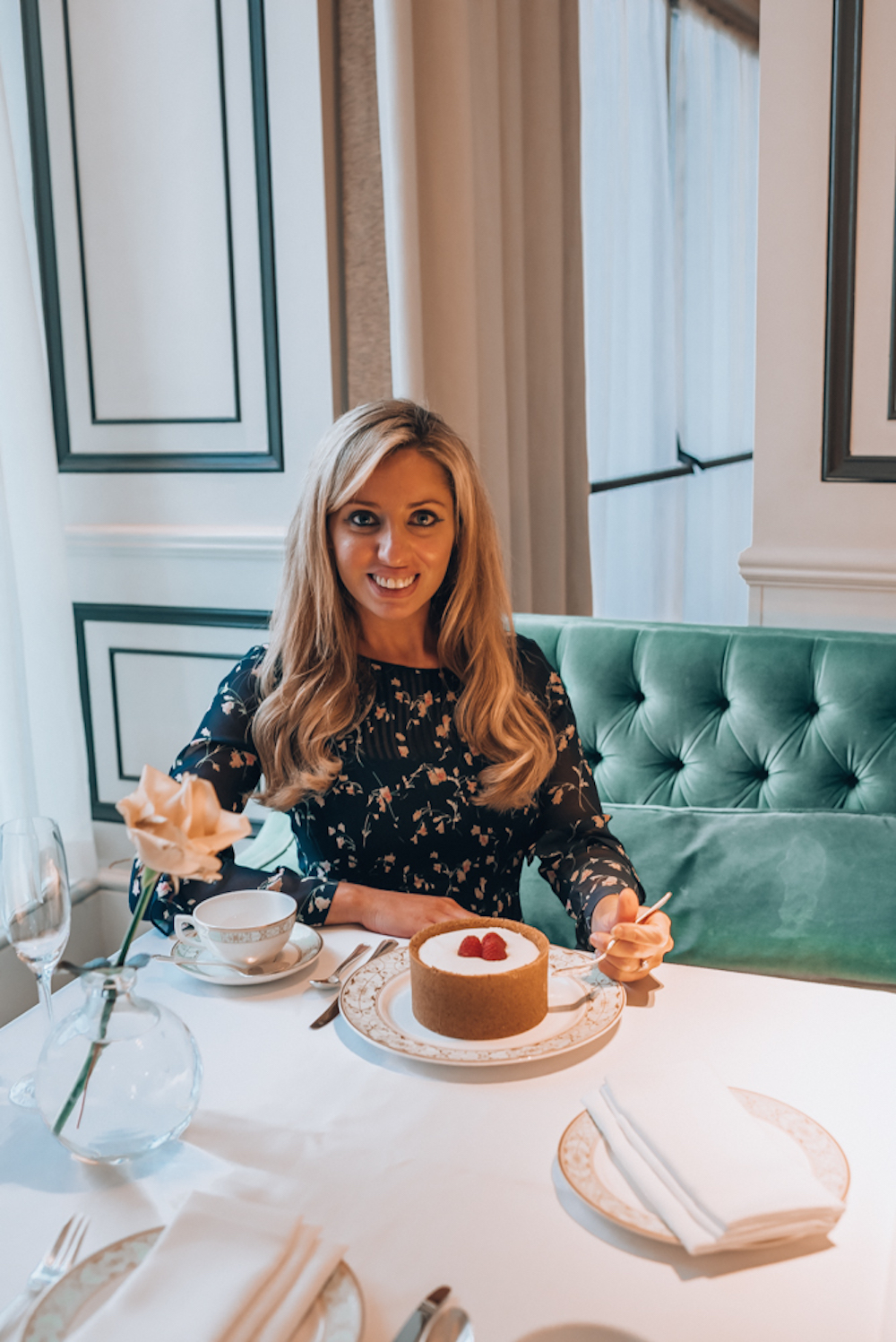 The cheesecake comes in three sizes and can also be bought at the hotel’s Park Lane Market, which is their coffee-house. The whole cheesecake is rather aesthetically pleasing so I got this picture back in the Park Room where the light was better. I can vouch for the taste too! Light as a feather with a perfect biscuit base.

But our wonderful day at Grosvenor House wasn’t over yet as we were led up to one of the top suites for a history lesson of the hotel. With 496 rooms, it’s clear to see why this is the most sizeable hotel in London plus the fantastic Mayfair location has made it a favourite of celebrities and royalty for the last 90 years. One of the hotel’s most notable historical facts is that the hotel’s Great Room was once a ice-rink and it was here that the young Queen Elizabeth II learnt to skate. 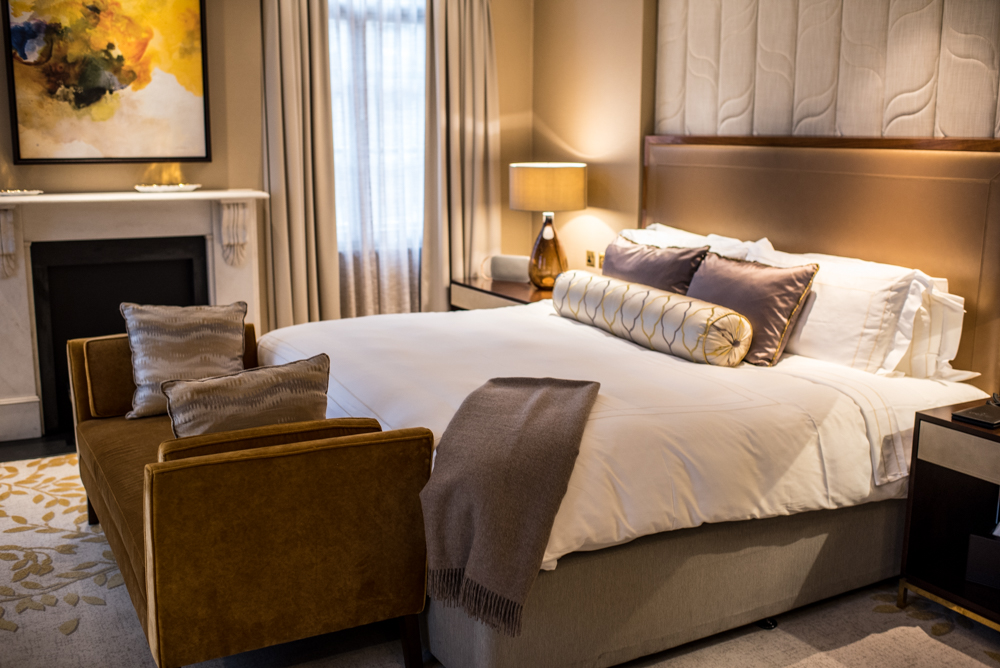 The hotel also hosts some of the most prestigious events such as the BAFTA’s, the Autosport Awards, the Royal Caledonian Ball, The Russian Ball and Pride of Britain. That ballroom that I remembered so well, actually seats 500 people, again making in the largest in London! 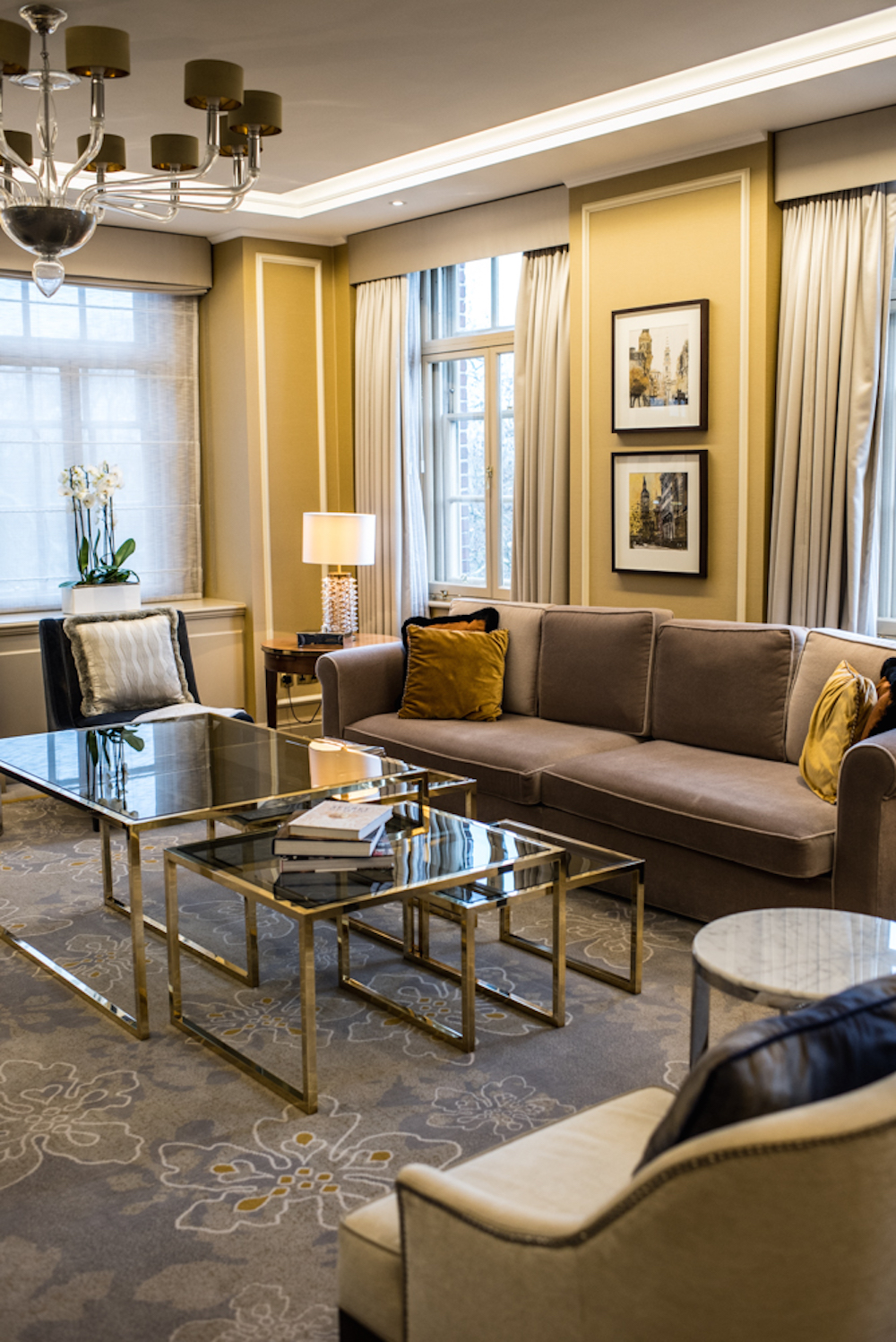 There are lots of exciting plans for the 90th anniversary included a history themed afternoon tea, a diamond cheesecake and the launch of first Grosvenor House Cocktail Book.

If you’ve read my blog for a while you’ll know I can’t think of anything better than a day exploring a beautiful hotel AND eating too! A huge thank you to Grosvenor House for having me for such a fun experience!