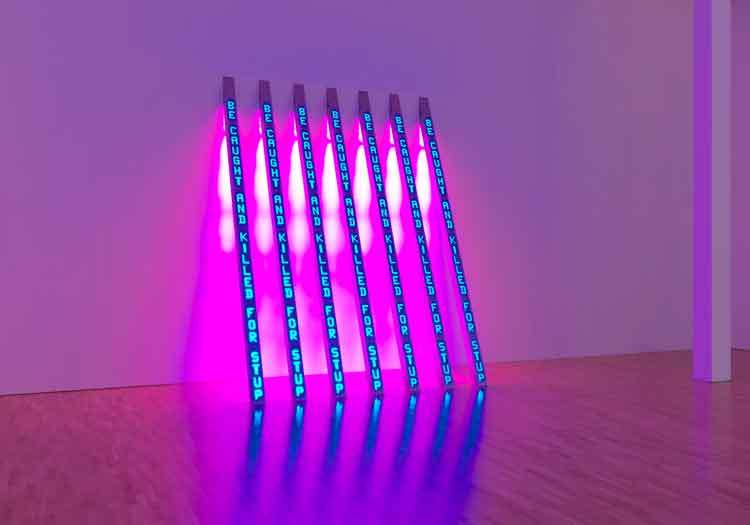 Tate Modern has just opened this year’s free exhibition in its ARTISTS ROOMS series, and it’s dedicated to the conceptual art of Jenny Holzer. Running all the way through until summer 2019, the show brings together works from across Holzer’s 40-year career, including several never before displayed in the UK.

Holzer is best-known for her artworks involving fragments of text. Visitors to Tate Modern will be able to see multiple works from her ‘Truisms’ series. Holzer wrote 300 aphorisms, many of them based on existing well-known sayings. They were originally printed on posters stuck around Lower Manhattan, but in this exhibition appear printed on condom packets, disposable cups, t-shirts and in Holzer’s famous LED artwork.

Two other LED works feature in the show, along with an installation created in collaboration with Lady Pink, a New York graffiti artist. Other highlights include Holzer’s ‘Redaction Paintings’, which use declassified government documents pertaining to US involvement in the Middle East as source material.

Earlier this year, singer Lorde wore a bright red Valentino dress to the Grammys with one of Holzer’s ‘Inflammatory Essays’ stitched onto the back. The poem begins: “Rejoice! Our times are intolerable!’ and ends with the line. ‘The apocalypse will blossom.’ Lorde is understood to have worn the poem to show solidarity with the #TimesUp movement.