Best UK Comedy Festivals Worth Booking A Holiday For! 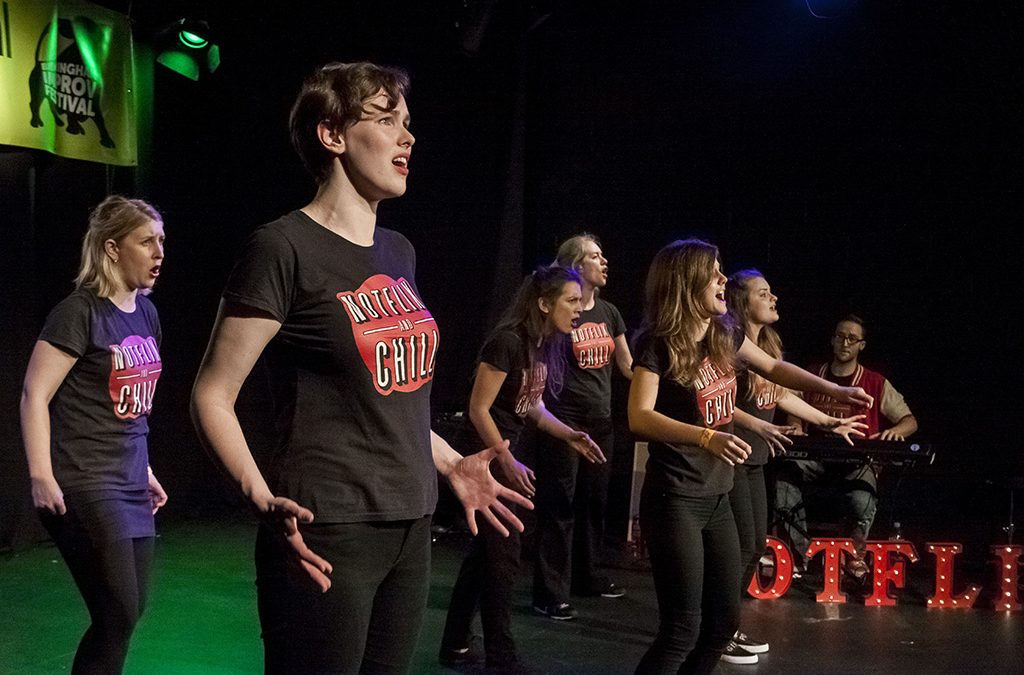 With the Edinburgh Festival Fringe happening this month (probably the biggest celebration of arts and culture in the world!) we got to thinking about all the other fantastic UK comedy festivals that take place throughout the year. From improv in Birmingham to slapstick in Bristol, there are so many festivals to choose from, whatever your sense of humour. And let’s face it, we all need a good laugh now and again!

Unlike music festivals, comedy festivals in the UK don’t usually have camping so booking somewhere to stay is a great idea if you want to make the most of the festival. To be close to the action, choose an apartment or townhouse in the centre. If you want to be somewhere quieter, opt for a cosy cottage on the outskirts or a spacious barn conversion. The options are vast, no matter what your budget, so picking a place on Holiday Lettings is easy.

Now in its 10th year, this popular festival plays host to a fantastic selection of award-winning stand-ups including Russell Howard, Ed Byrne, Nina Conti, Shappi Khorsandi and many more. Cult-hero Adam Buxton and self-styled ‘German Comedy Ambassador’ Henning Wehn will also be in attendance. Add to the mix gourmet street-food, music and a bar, and you’ve got a recipe for a perfect comedy festival.

Book a stay at a rental in Greenwich

They say that laughter is the best medicine; this health-conscious comedy festival in Liverpool aims to prove just that. Top comedians from around the UK gather in Liverpool for two weeks each September, joined by the very best of homegrown Scouse talent. There’ll also be a wide range of health and humour workshops. The festival is powered by The Comedy Trust, a charity based in the city centre. Their mission is to work towards ‘Creating Happier, Healthier People’. Year round, the Trust works to improve mental health and well-being in communities, the education sector and the corporate sector through the use of comedy-based programmes.

Look for a self-catering rental in Liverpool

Celebrating the Black Country’s humour, this fantastic festival provides the opportunity for the local community to participate, alongside well-known stand-up comedians. Venues across the city will host an array of Funny Things, including comedy, theatre, music, poetry, film, stand-up, family activities, talks and workshops. Listen out for the festival band, Orchestra of Chaos, in a café, chip shop, street corner or hairdressers near you, or get involved with the #JokeExchange and see your joke on a placard in the city centre. The programme of events is vast, so be sure to check out their website for more details on locations and times. And if you’re looking for comedy festival accommodation, you’ll find an amazing selection of rentals nearby.

Book a place in Wolverhampton this autumn 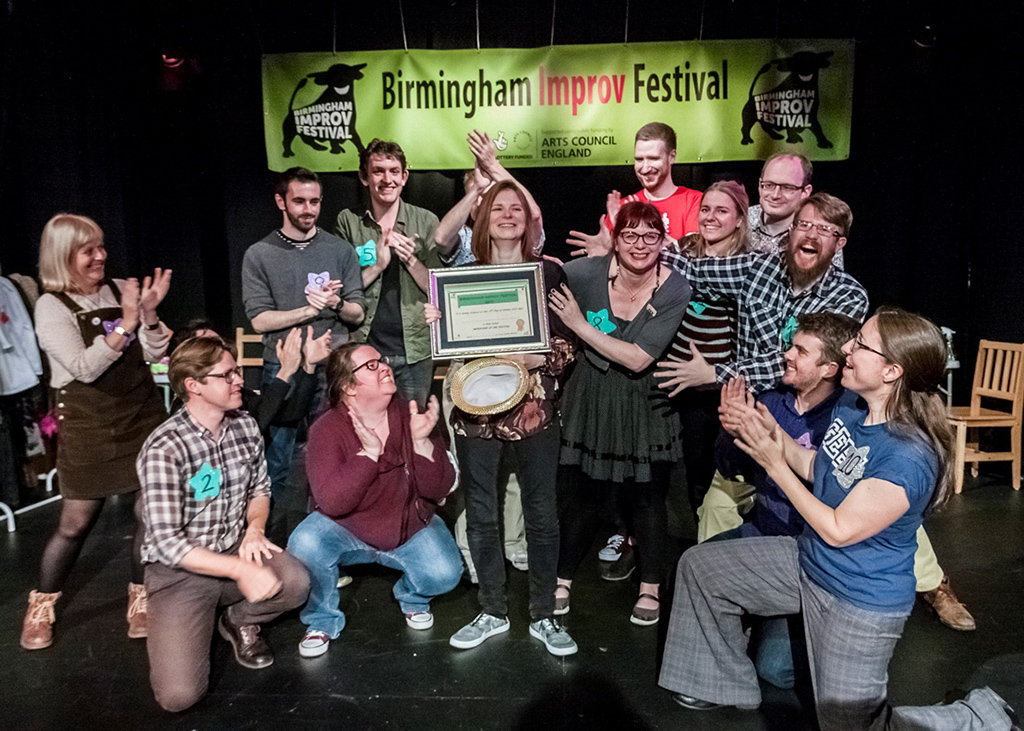 Once the chilly weather kicks in, there’s nothing better to warm the cockles than a good giggle. And that’s exactly what you’ll get at this spontaneous comedy festival in Birmingham. The event takes place over nine days where there’ll be 22 shows across two venues. Performers will be improvising on a whole range of topics, from Enid Blyton to Anime, and on Shakespeare to Star Wars! So, expect the unexpected at this fun and fresh festival in the Midlands.

Choose a holiday rental in Birmingham

The Nottingham Comedy Festival has been going strong since 2009 and has grown to include a wide variety of comedy, such as stand-up, improvisation and sketch. With shows held in many different venues, including theatres, bars, cafes and restaurants, across both Nottingham and Nottinghamshire, the festival hosts new acts alongside seasoned pros. See shows at the Canalhouse, the Glee Club, the Angel Microbrewery and more.

VAULT Festival is London’s biggest and boldest annual arts festival, hosting hundreds of events each year. It’s not just comedy; expect a wide array of theatre, film, and live performances, too. Part of VAULT’s mission statement is to “fill and expand our cultural imaginations, and encourage audiences to fill their lives with creativity, adventure, and inspiration.” So if you’re thinking about becoming a performer yourself or just want some inspiration, this is the festival for you! In 2018, over 350 shows entertained over 70,000 people across sixteen venues and 2019 is shaping up to be just as great, if not better!

Choose a holiday rental in London 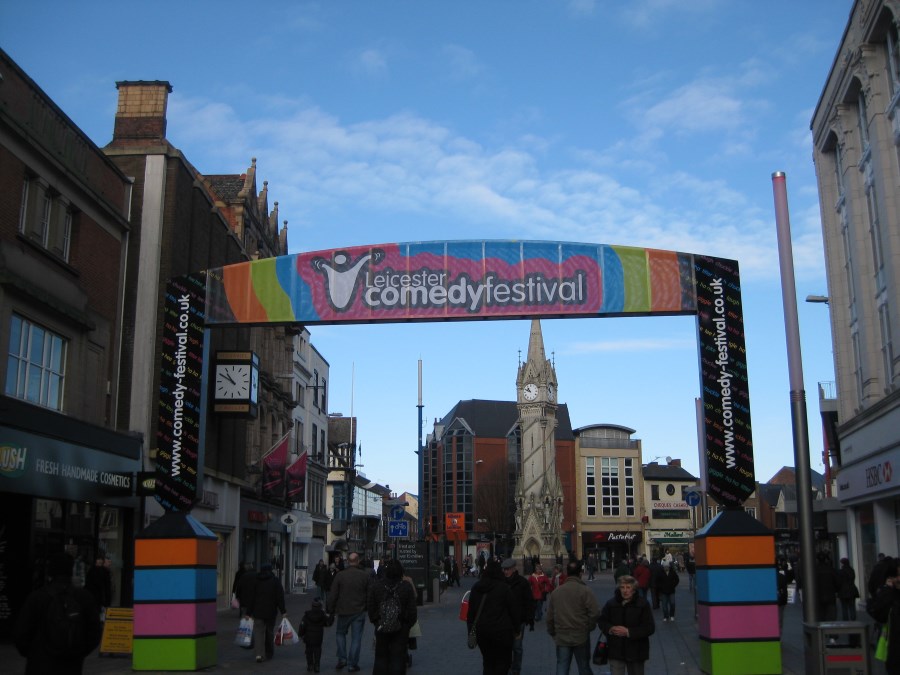 Find a fantastic place to stay in Leicester 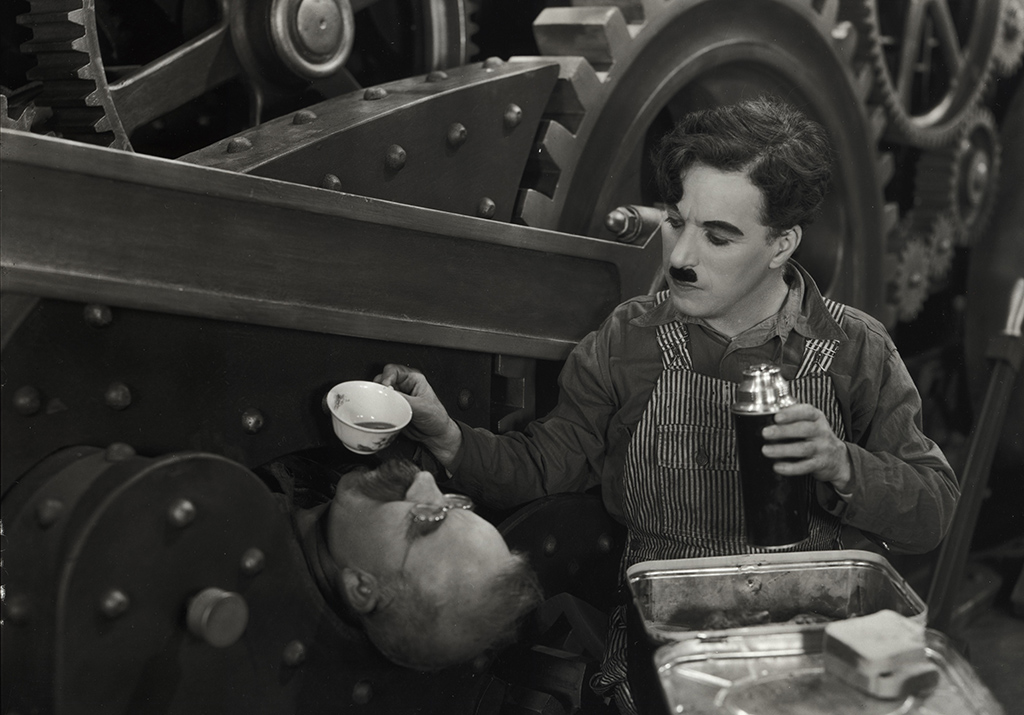 If you’ve been hankering after a weekend away in Bristol for ages, maybe this celebration of silent comedy will be enough to tempt you. Take your seats in the iconic Bristol Hippodrome for an evening of live music and film, perfect for comedy fans of all ages. Your host is comedian, actor and satirist Marcus Brigstocke, and highlights include a complete screening of Charlie Chaplin’s outstanding comedy masterpiece Modern Times (1936) while Chaplin’s own score is performed live by a 40-piece orchestra. Plus, enjoy short comedies from Laurel & Hardy and Buster Keaton, all with live musical accompaniment, and additional entertainment from comedian-magician, John Archer.

Pick a place to stay in Bristol 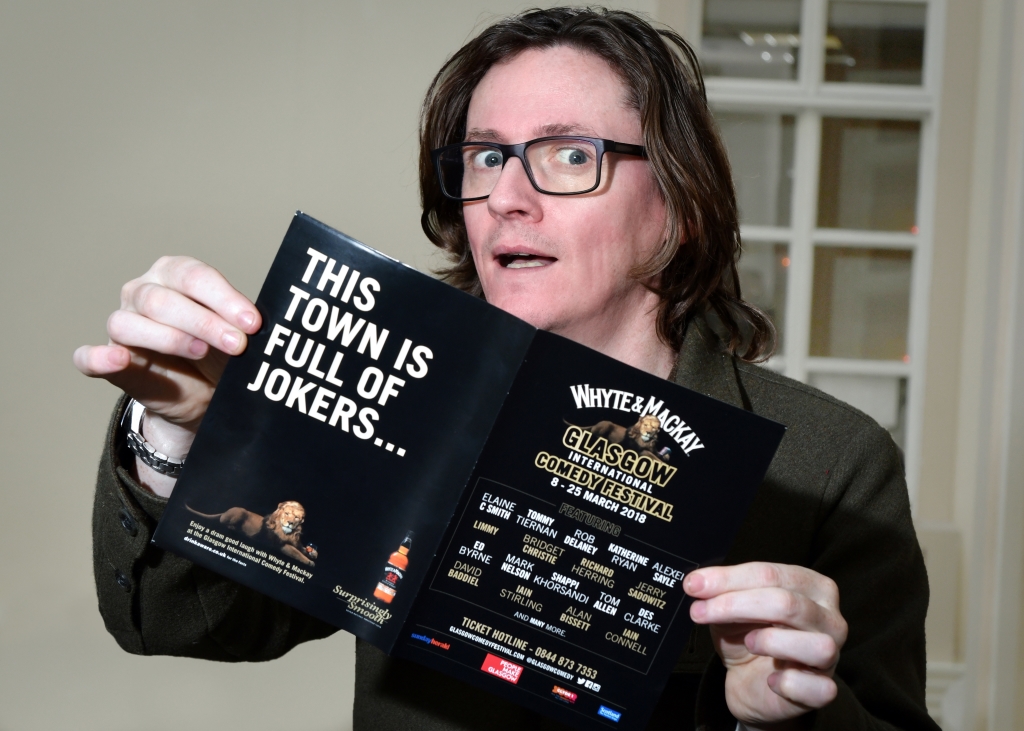 This fantastic festival has been bringing world-class comedy to Glasgow for over a decade, and has hosted top comedy stars from around the UK and beyond. In 2019, they’ll be accompanied by the very best of homegrown Scottish talent, too. As one of Europe’s largest comedy festivals, expect a huge range of entertainment and big names in comedy. Julian Clary and Craig Hill are just a couple of the comedians who’ll have audiences rolling in the aisles. Why not combine your festival visit with a holiday? Glasgow is packed full of attractions so there’ll never be a dull moment.

Book a break in Glasgow

This eclectic festival is made up of hundreds of shows which take place in Machynlleth – a pretty market town in Mid Wales. The performances take place at various venues, all of which are located within 10 minutes walk of each other in the centre of town. There’s a real buzz in Mach the weekend of the festival. Extra attractions include the Beech Bar in the big top on the lawns of Y Plas, free performances on the woodland pavilion, a free interactive family programme in the kids tent and other pop-up performances across the weekend. 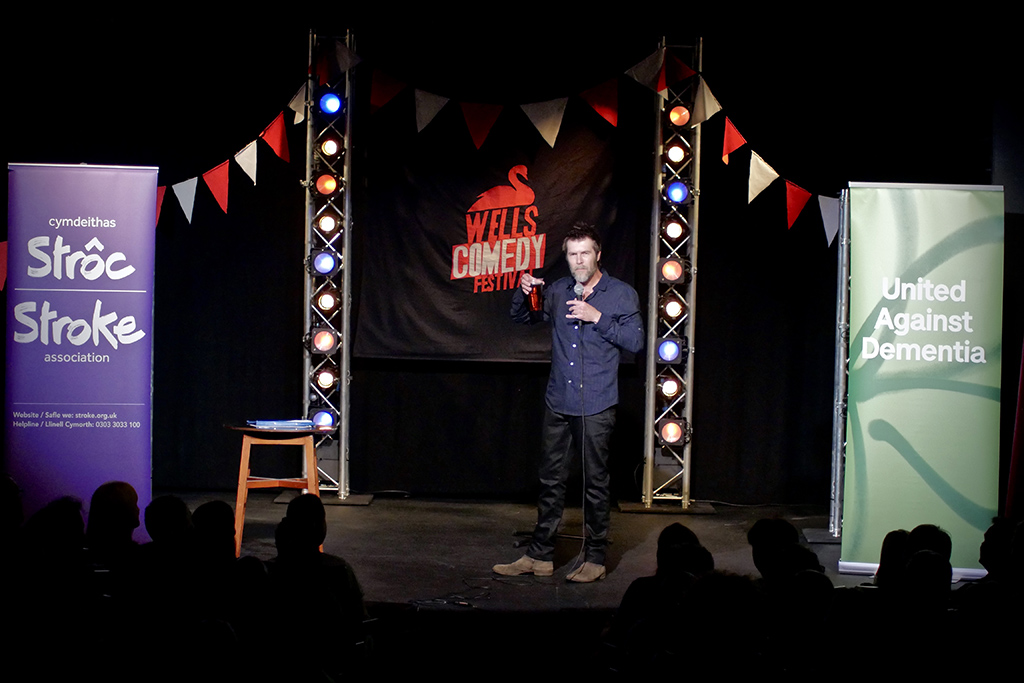 Founded in 2015, The Wells Comedy Festival plays host to the finest comedians in the country. Enjoy a long weekend at a rental in the heart of Somerset to pack in as many belly laughs as possible! Previous line-ups have included Stewart Lee, Rhod Gilbert, Alexei Sayle, Sara Pascoe, James Acaster, Joe Lycett, Omid Djalili, Limmy, Milton Jones, Tommy Tiernan and Bridget Christie.

See all holiday rentals in Wells

Each May, Brighton Fringe welcomes international performers and audiences as it “showcases the creative heart and soul of the city and its unique cultural heritage”. Much of the talent here is home-grown, as more than 30% of the events are put on by artistic companies based in Brighton & Hove. This open-access event means anyone can register. This ensures both new and established performers can take risks and entertain audiences. Whether you want to entertain or be entertained, there are hundreds of rentals nearby so getting to the festival will be as easy as pie.

Book a week or two during Brighton Fringe

Elegant Bath is a hive of art and culture all year round, but this brilliant classic fringe festival brings another dimension to the city. Anyone can put on an event in if they can organise it, so expect an eclectic array of comedy, art and music. It was founded in 1981, making it one of the oldest festivals in the UK, so when it comes to comedy festivals, this one is well-worth booking a break in Bath for… like you needed a reason anyway!

2018’s festival saw hundreds of performances taking place across 30 venues in Greater Manchester. Experienced comedians, artists and performers entertain audiences alongside first-time participants. The tickets are fantastic value so you can take in lots of shows and still have money to spend on visiting Manchester’s iconic sights while you’re there. There are awards for several categories, including Best Newcomer and Best Use of Space, so if you’re thinking about breaking into the world of performing arts, you’ve got plenty of time to register! 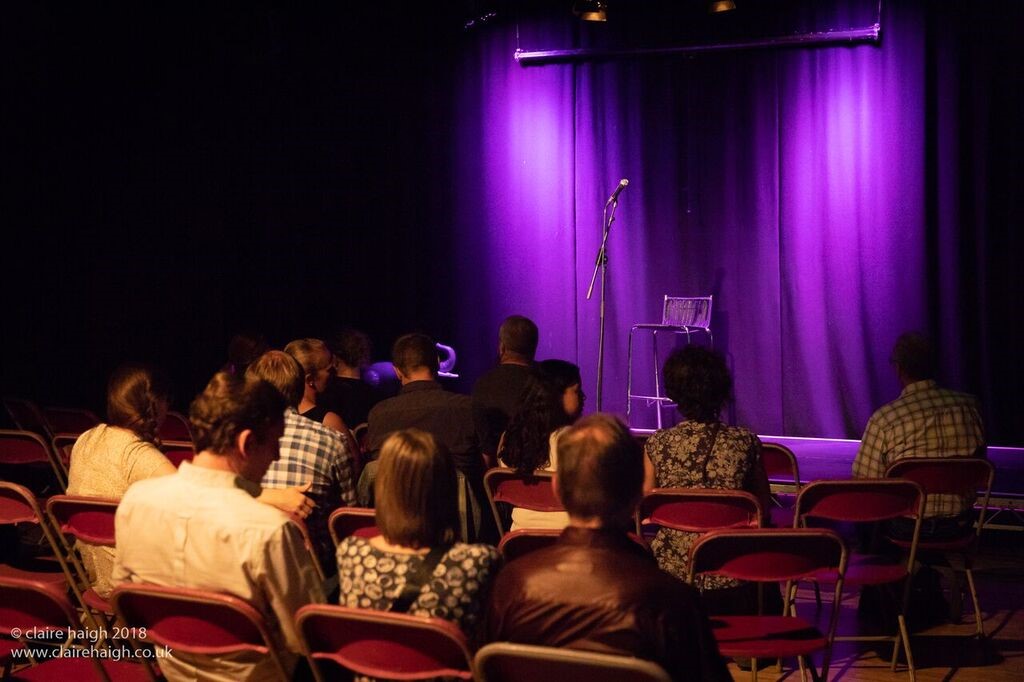 Launched in 2007 by the Jesterlarf Comedy Club, this festival aims to bring the Edinburgh Fringe Festival experience to Cambridge. Audiences get the opportunity to see some of the biggest names in comedy, as well as emerging talent, in an intimate venue. There must be something in the water, as Cambridge is no stranger to fostering some of our finest comedians and performers, from Peter Cook, Eric Idle and John Cleese, to Stephen Fry, Emma Thompson and Olivia Coleman. And as Cambridge is such a beautiful city, this fantastic summer festival is just another reason why booking a break there is a wise choice.

See all rentals in Cambridge

This family-friendly comedy festival is top summer event in York’s entertainment calendar, bringing the best in comedy, cabaret, theatre and music to Yorkshire. In July 2018, audiences enjoyed a packed programme of events, featuring Michael Palin, Reginald D Hunter and Omid Djalili. Also entertaining the crowds was Lost Voice Guy (Lee Ridley), fresh from his Britain’s Got Talent 2018 win. Plus, there’s street food, family entertainment and the York Fringe Dog Show, so book an extended break to make the most of the festival and explore Yorkshire next summer.

Find a family-friendly rental in York