Tale as Old as Time: The Beauty and The Beast Afternoon Tea at Town House at The Kensington 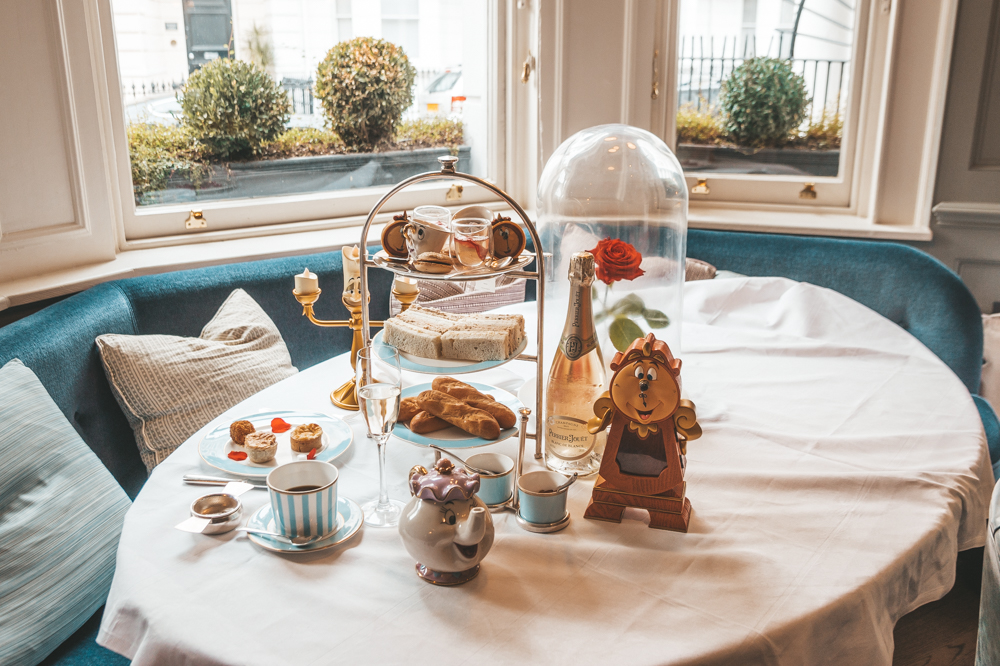 Did you ever dream of being a Disney princess when you are younger (and if you didn’t who even are you?)…. Well I think the princess that I most related to was Belle (ok so I was lacking both in the Beauty and the Beast areas of Belle’s life but still)… I loved books and I dreamed of adventure in the great wide somewhere. I think I still relate to Belle to be honest and that’s why the Disney cartoon is one of my favourites and why I absolutely fell in love with the remake. It’s also why when Town House at the Kensington Hotel invited me to ‘Be Our Guest’ for the Tale as Old As Time Afternoon Tea inspired by Beauty and the Beast, I was absolutely thrilled…
You see the popular tea has been sold out for months and booking is nearly impossible, it was almost like my fairy godmother had waved a magic wand and given me the opportunity that I dreamt of… 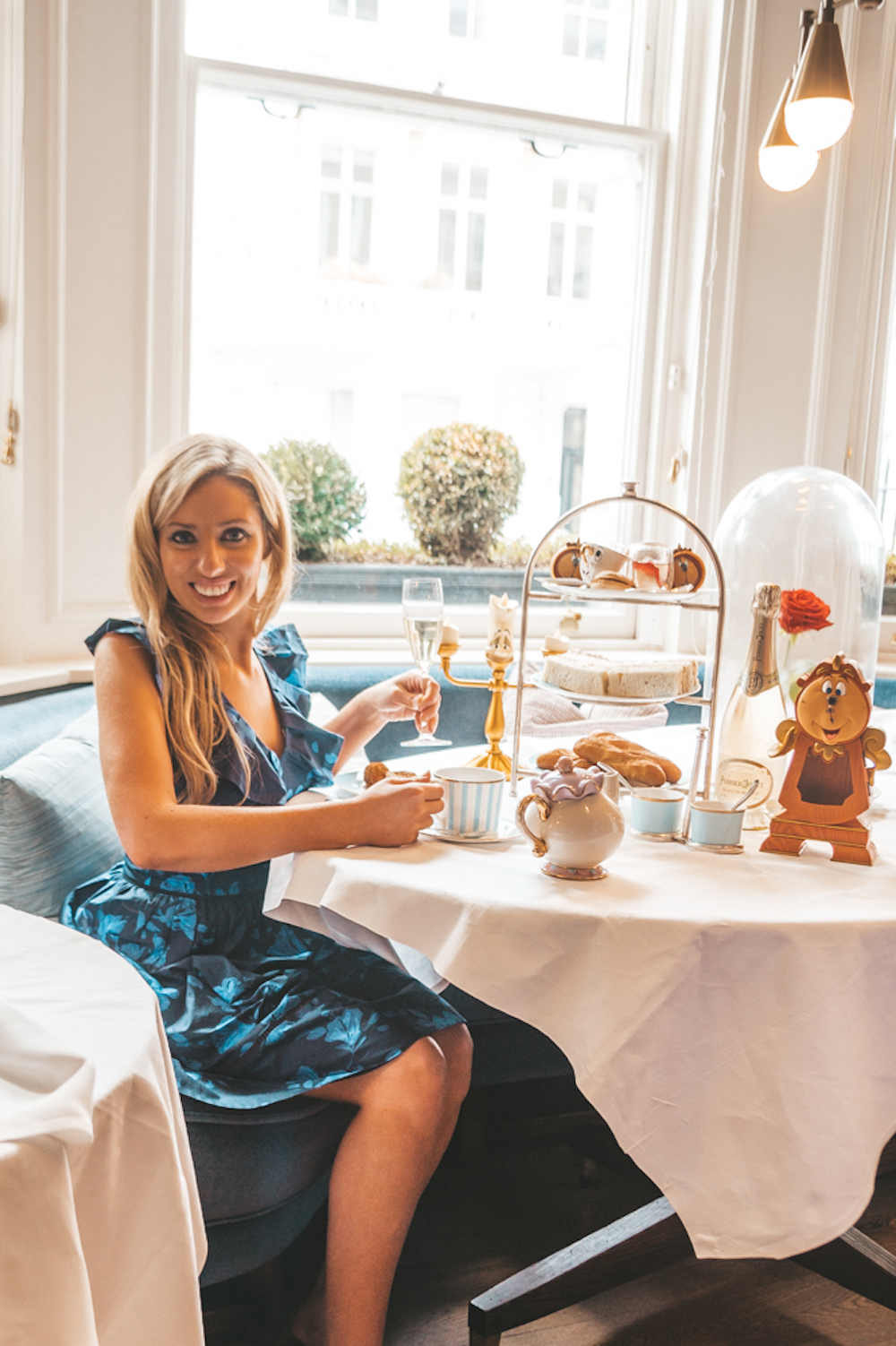 Taking our seats around a table strew with rose petals we were quite ready to put ‘the service to the test’ as Champagne Perrier-Jouet filled our glasses and the banquet was prepared! All my favourite characters from the film were round the table with us! Mrs Potts, Chip, Lumière and Cogsworth were there as ceramic figures and the enchanted rose under a cloche. 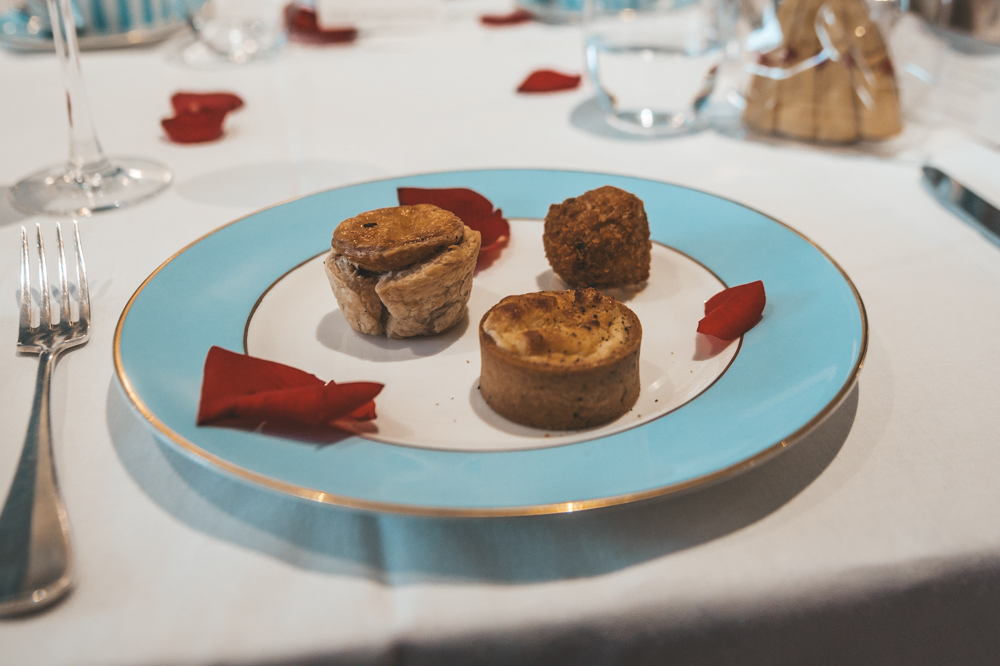 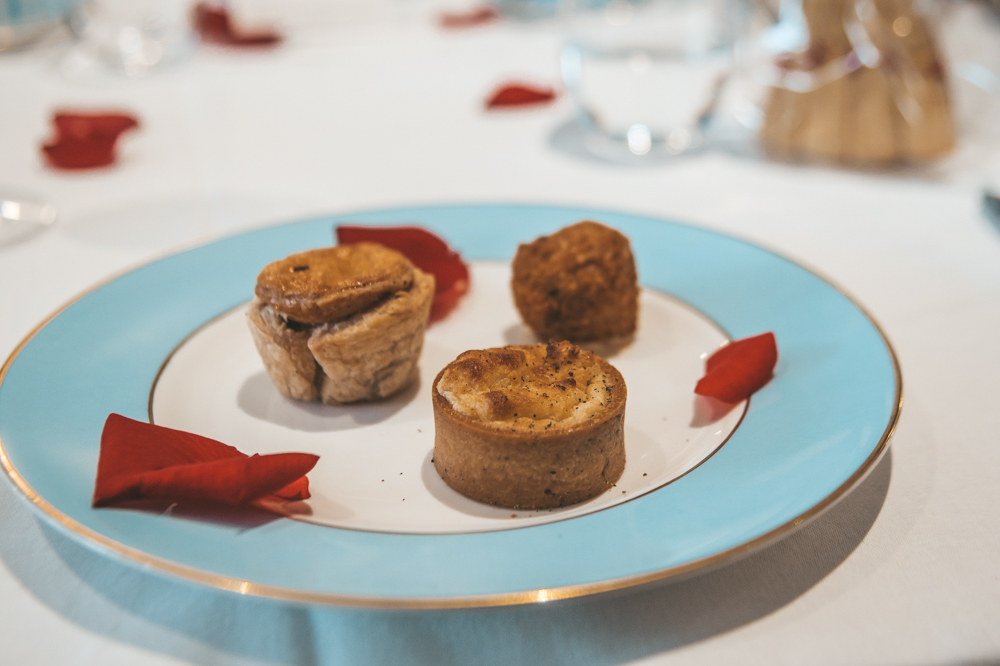 The first course represents the Beef ragout, Cheese souffle, Pie and pudding ‘en flambe’ (We’ll prepare and serve with flair) from the song Be Our Guest. One of my favourite tunes, sung when Belle is first imprisoned in the Beast’s castle and she is serenaded by the candlestick, teapots and plates that are actually alive! The Townhouse’s take on this lyric sees a serving of venison pie, beef ragu and saffron arancini with lemon creme fraiche and cheese soufflé roscoff onion pissaladière. I loved these delicious canapé sized bites as I am always more of a fan of savoury options and I love it when afternoon teas have something more than the sandwiches. 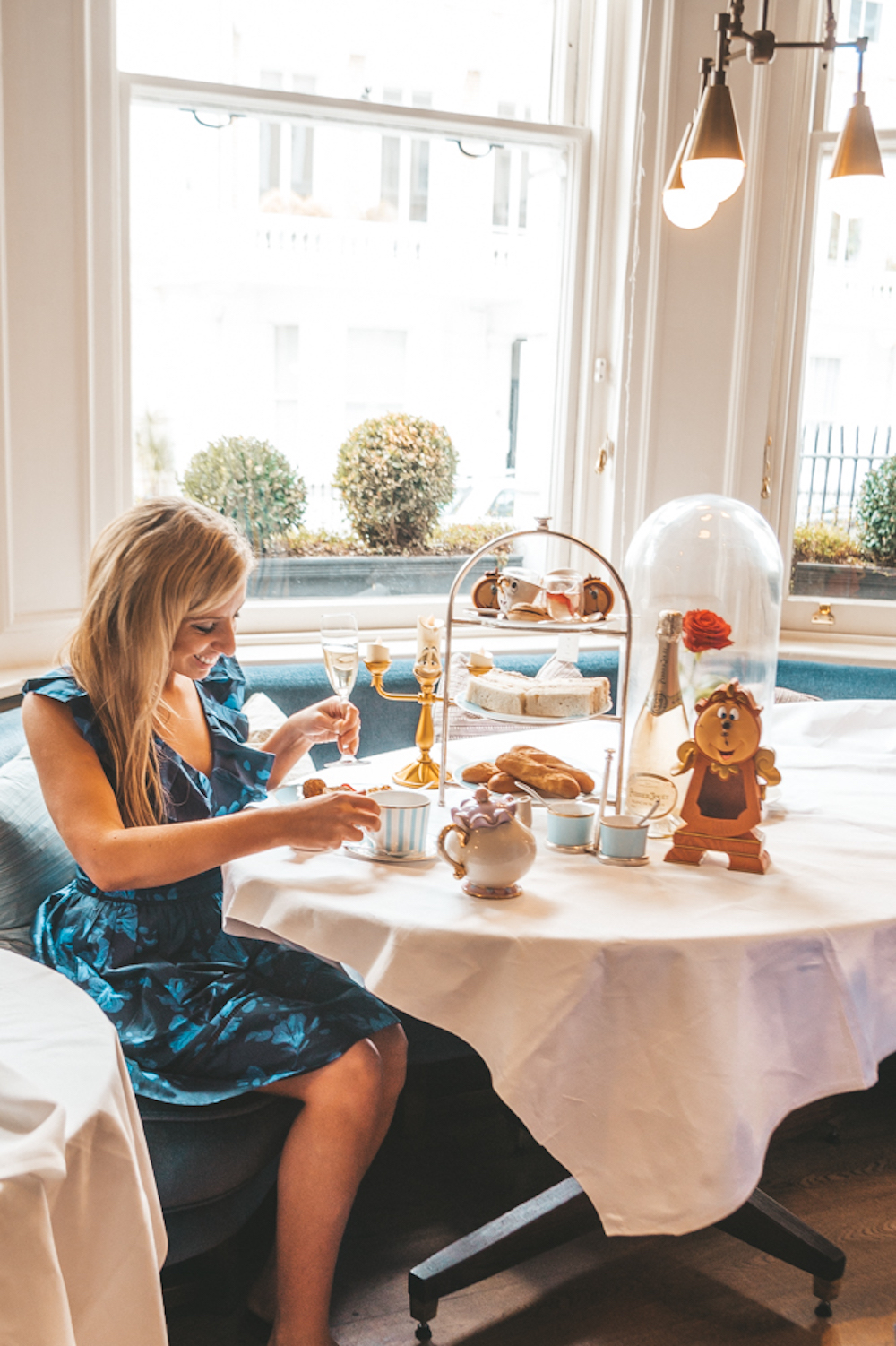 As Mrs Potts says ‘she’ll want tea’ and here’s its sourced from the Rare Tea Company founded by Henrietta Lovell who sources the very best teas from local farms. At the Townhouse you can choose from a selection of black, white and green tea plus herbal infusions and from there it’s up to you whether its one lump or two… 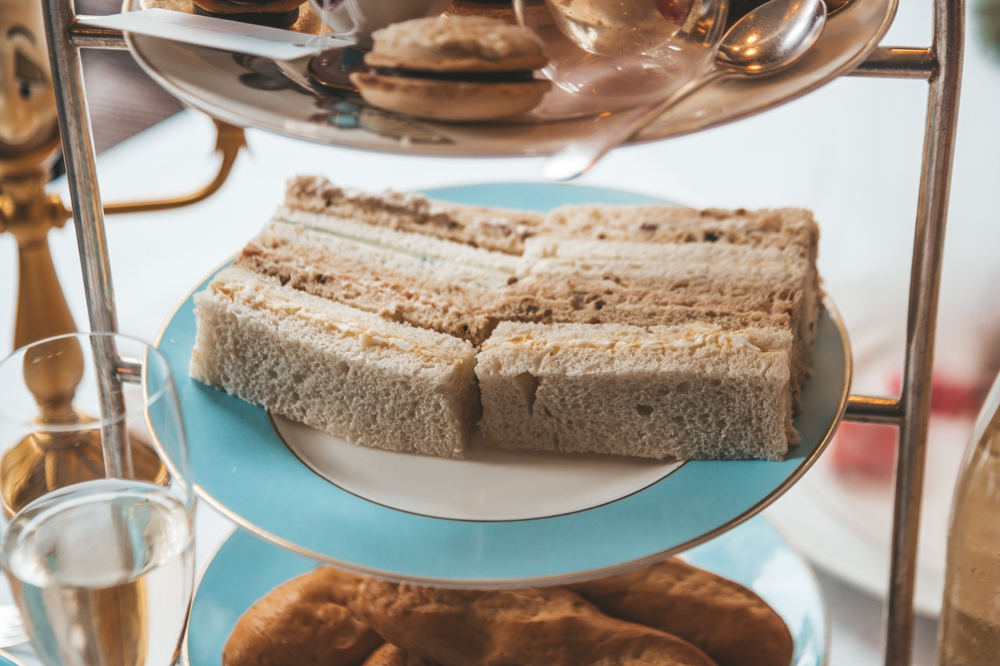 The sandwiches are perhaps the only element of the tea that aren’t so magical but they’re still very tasty. On the plate is Argyle smoked salmon and crème fraîche, roast Devon Red chicken with cranberry, cucumber and cream cheese and egg mayonnaise and cress. 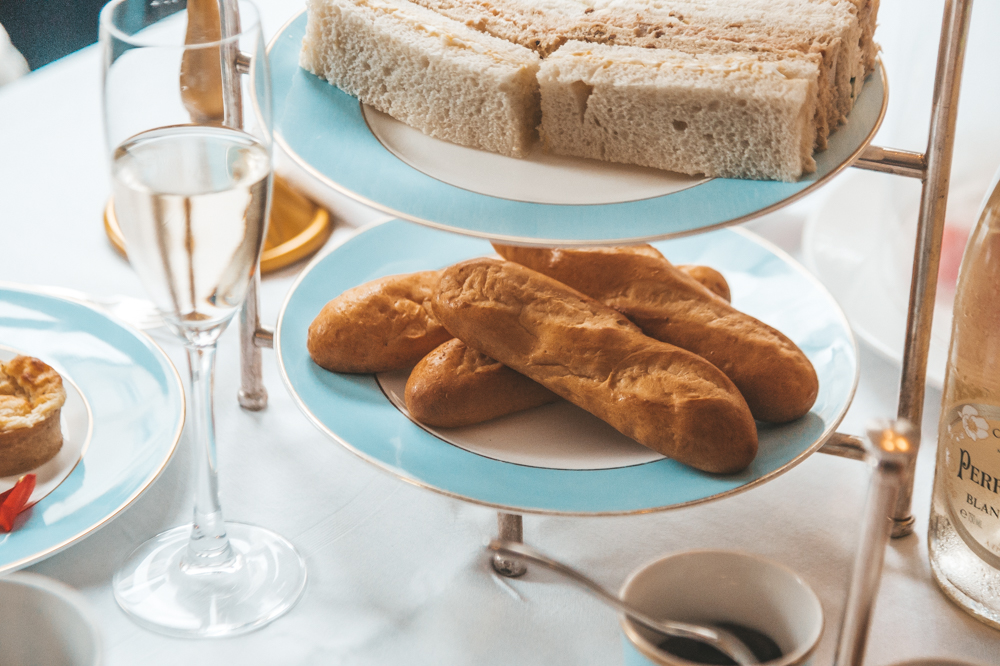 Controversially rather than scones, the Townhouse serve Marie’s sweet brioche baguette… this is a nod towards the opening song of the film, Little Town and the line ‘Marie, the baguettes, hurry up!’. But scone enthusiasts will soon be placated by the fact that the baguettes are served with apricot preserve and chocolate pot. As Lumière would say ‘after all, this is France’ (well it’s not it’s Kensington, but in my mind we were enjoying this incredible tea in a beautiful French village like the setting of the film).

Course by course
One by one
‘Til you shout, enough, I’m done… 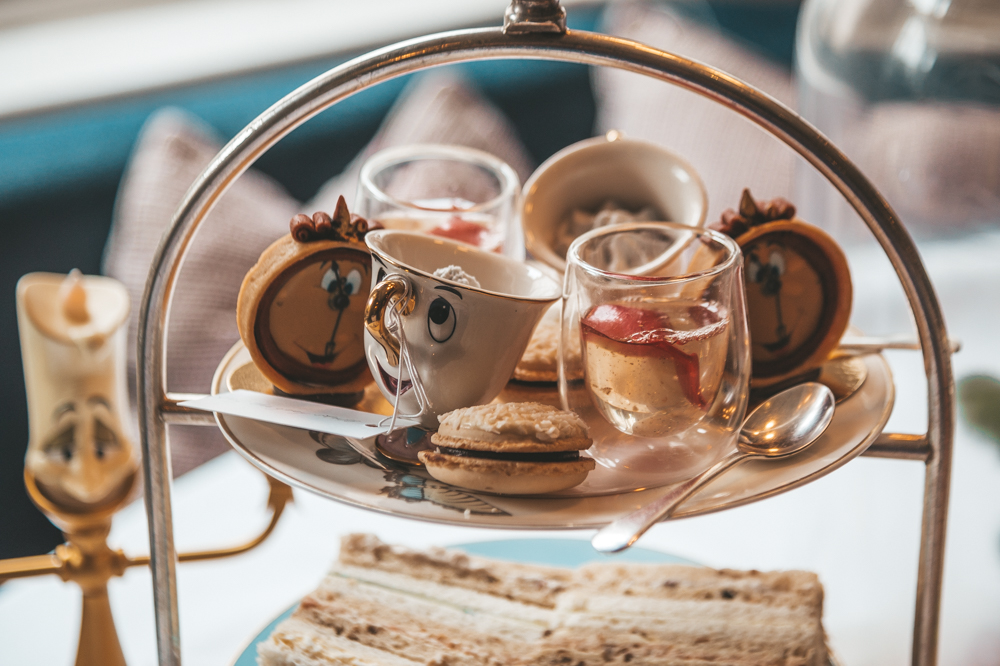 Of course every banquet ends with dessert and the pastries sit proudly on top of the stand. A note tied to Chip suggests you ‘try the grey stuff’ – a line from Be Our Guest – in this case the grey stuff is white chocolate, and just like in the song, it’s delicious. 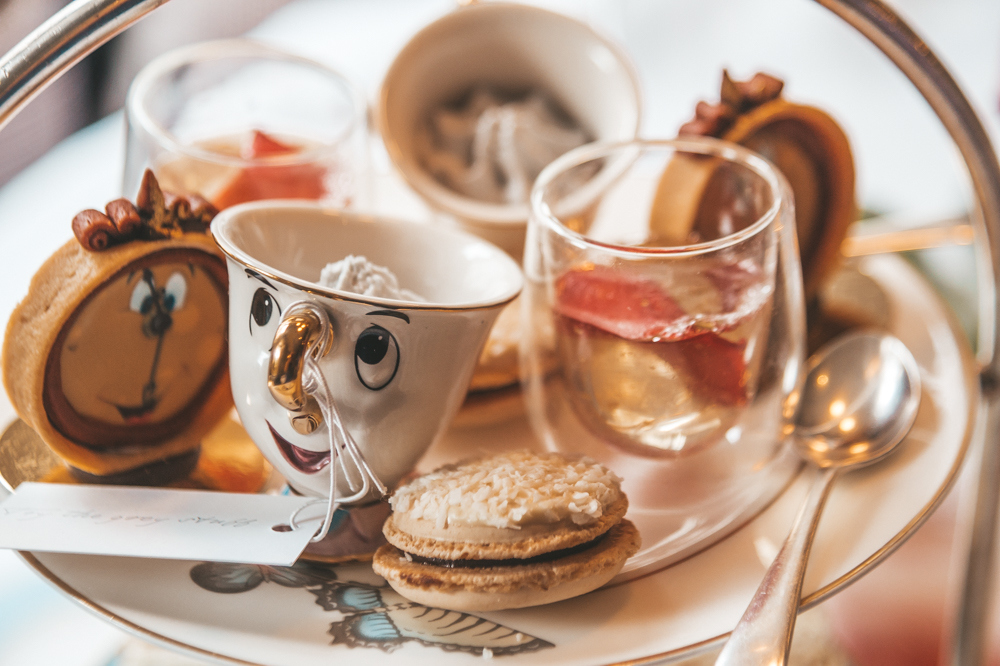 Vanilla and gold jelly has a magical rose petal suspended inside and the spiced snowball macaron with chocolate and coconut is inspired by Belle and the Beast’s snowball fight. A speculoos dress, like the one Belle wears for the Tale as Old as Time song, is wrapped up as a little something to takeaway home. 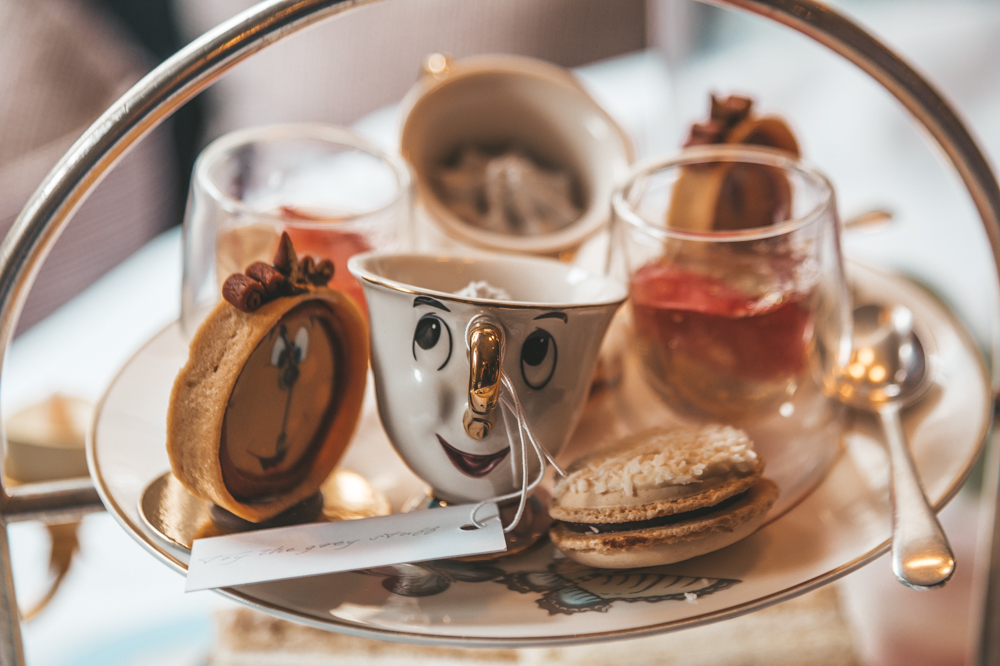 My favourite pastry represents one of my favourite character, the Cogsworth clock contains a delicious chocolate ganache wrapped in biscuit. 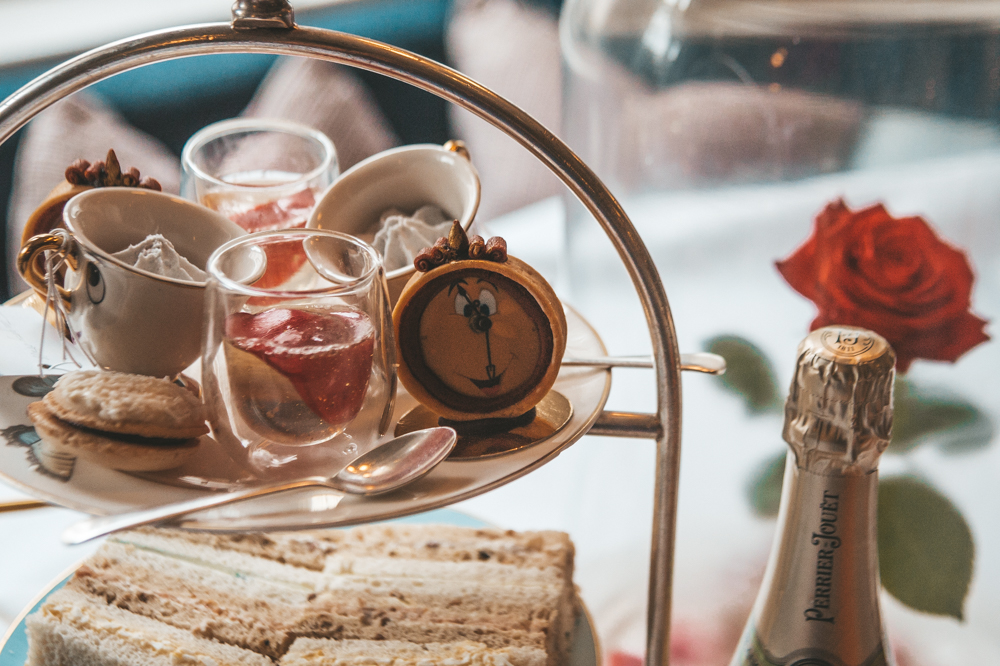 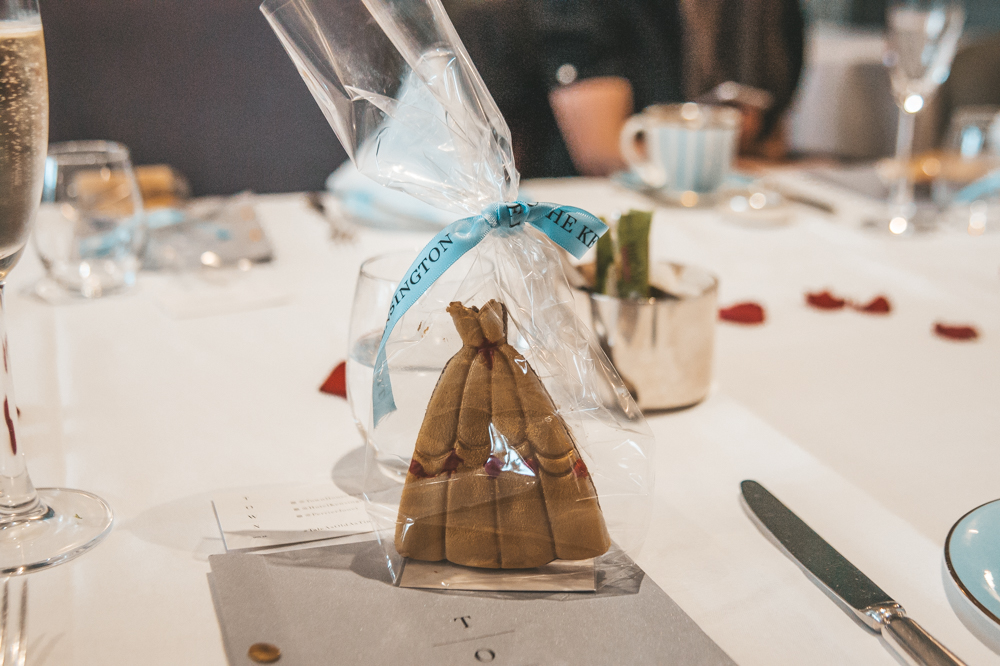 It is no surprise to me why this tea is so popular, in fact why it’s one of the most popular in London. The attention to detail in taking inspiration for the Disney film is absolutely spot on and everything is just so cute. Fellow Beauty and the Beast fans will not be disappointed it’s everything that you could hope for and more. Thank you to Mrs Potts, Chip, Lumière, Cogsworth and the team at The Townhouse for having me as your guest! 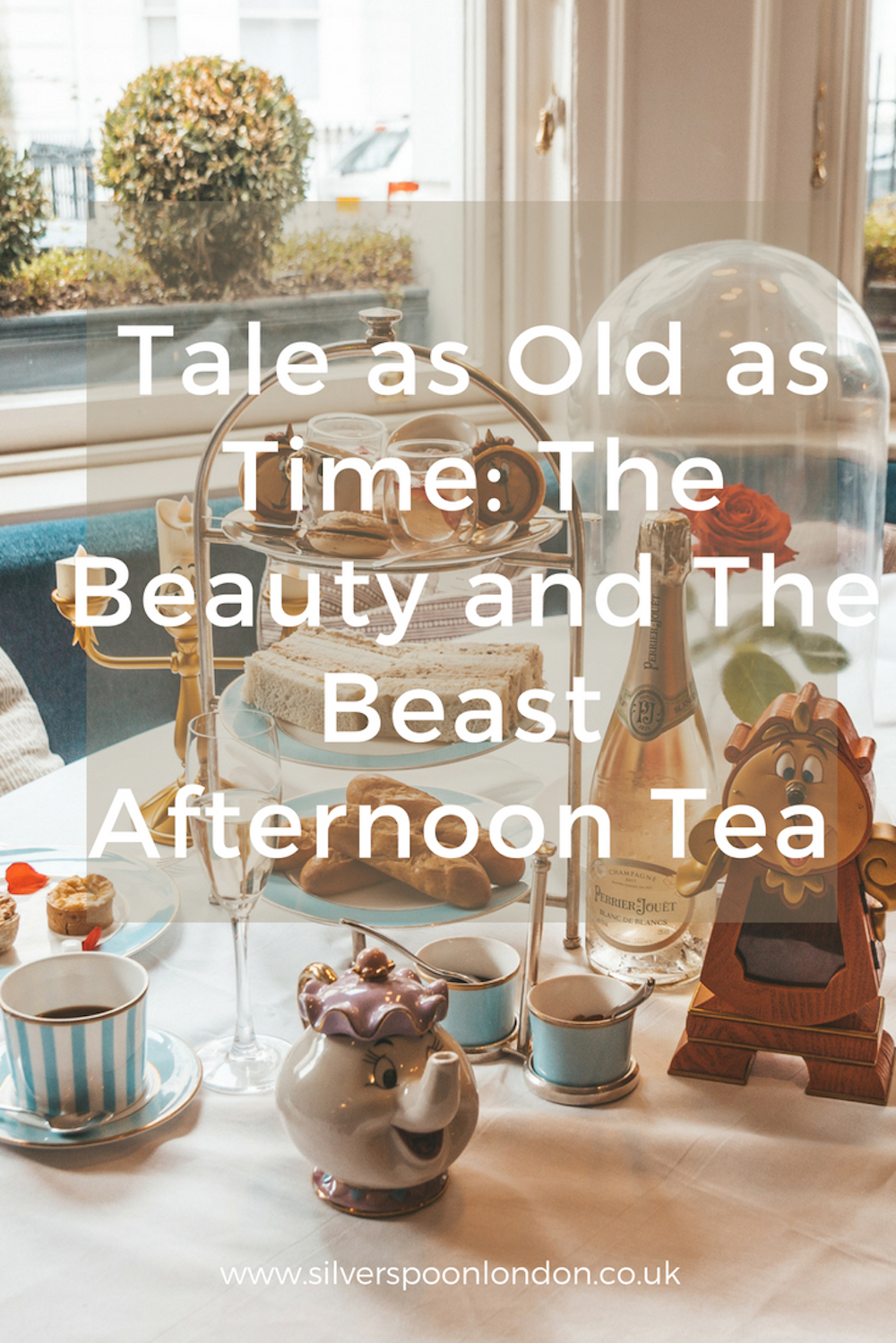 I was a guest of the Town House for a blogger event.

The post Tale as Old as Time: The Beauty and The Beast Afternoon Tea at Town House at The Kensington appeared first on SilverSpoon London.