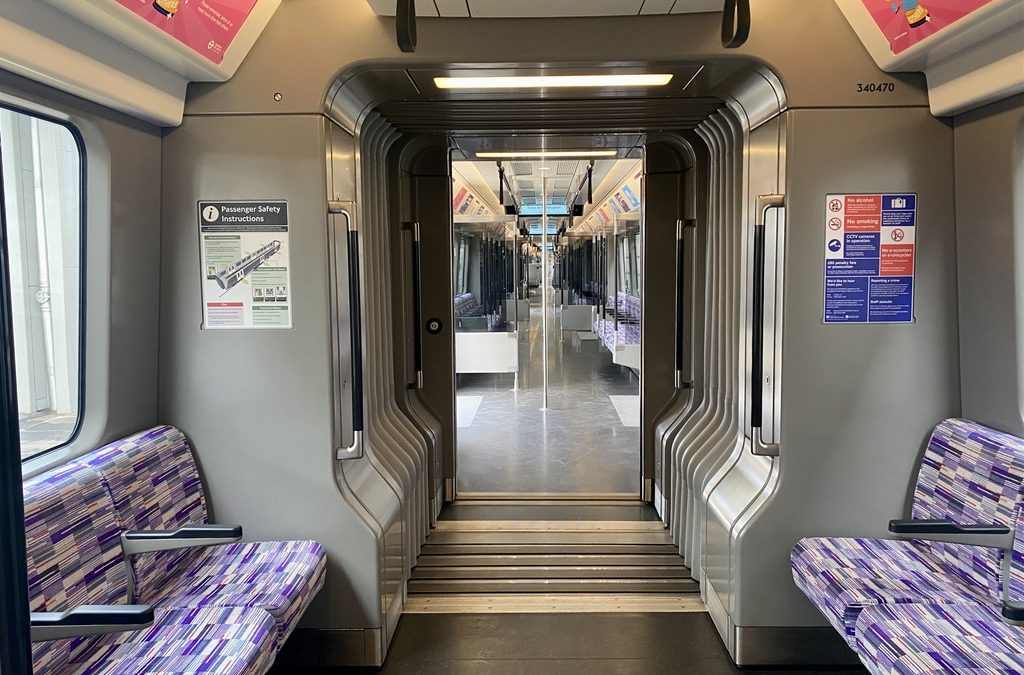 Editor’s Note: Unfortunately, I couldn’t be there today for this special day, but thankfully Laura Porter was able to get out there and check out London’s new railway today and write up this report for everyone. Thank you, Laura!

We’ll soon forget the long delay and the enormous cost as the Elizabeth Line opens today (24 May 2022). This is the most significant addition to our transport network in decades.

The Elizabeth Line should transform travel across London and the South East by improving transport links and cutting journey times. The line is over 60 miles long with 41 stations and is Europe’s largest engineering project. There’s additional capacity to reduce crowding and much better accessibility so more can use the line. The trains are all the ‘walk-through’ type and not separate carriages and there are new larger, lighter, and brighter stations.

How Long Have We Waited?

There have been hopes for an east-west railway under London since the Second World War. It took until 1991 for the first full Crossrail scheme to be submitted to Parliament, and then until July 2008 for The Crossrail Act to be passed. The formal start of construction for Crossrail was marked at Canary Wharf on 15 May 2009 although the main construction phase was launched in 2011. Tunneling for the new rail tunnels began in May 2012 and was completed in May 2015.

The Elizabeth Line was originally planned to open in December 2018. But today, 24 May 2022, is the official opening day after close to £19 billion has been spent (£4 billion over budget). Not everything is connected today but full services across the entire route will be introduced by May 2023.

Note, The Elizabeth line is the official name for the now-open, passenger-carrying service. Crossrail was the name used during the construction and testing phases. (Good luck getting everyone to use one name!)

The line is named after Her Majesty Queen Elizabeth II who visited Paddington station last week.

The Elizabeth Line is the new rail route from Reading in Berkshire and Heathrow in the west to Shenfield in Essex and Abbey Wood in south-east London via the center of the capital.

We are not supposed to call it a ‘tube’ line but should think of it as a new mode of transport like the RTR in Paris or the S-Bahn in Munich.

The Elizabeth Line will initially operate as three separate railways, with services from Reading, Heathrow, and Shenfield connecting with the central tunnels from autumn 2022.

This means that, for now, you do still need to change at Paddington or Liverpool Street to board the central section of the Elizabeth line.

Once the line is fully open, this will be the route map.

The central section of the line – from Paddington in the west to Abbey Wood in the east – opens today.

The train services from Reading and Heathrow to Paddington mainline station, and from Shenfield to Liverpool Street mainline station, have been operating since 2015 (as TfL Rail, and under other franchises before that). But, from today, they are rebranded to the Elizabeth line.

These new stations are impressive. The platforms are much larger and there’s no ‘mind the gap’ as the trains were made for the tunnels so the doors cover the platform edge.

At Canary Wharf, the escalator glass sides are yellow. I’ve no idea why. (Yes, I too had thought about yellow canaries so maybe that’s it.) At Paddington, there’s a brick wall built from the same Imperial bricks that Isambard Kingdom Brunel used for his original Paddington station. And we’re told you could fit The Shard inside Paddington’s Elizabeth Line station.

All 41 stations are step-free to platform level (with the exception of Ilford which will be ready by summer 2022). Farringdon and Liverpool Street have incline lifts alongside the escalators. (These are cool as it’s an elevator going diagonally so you travel in the same line as people standing on the escalators.)

Between Paddington and Abbey Wood, there are 12 trains per hour (every five minutes) in each direction between 6.30 am and 11 pm on Monday to Saturday.

The full timetable will not be in place until May 2023.

Initially, this new central section of the line (Paddington to Abbey Wood) will be closed on Sundays. This is for engineering testing and software updates.

The Sunday closures will be lifted on 5 June 2022 to help people traveling in the capital during the Platinum Jubilee weekend with trains running from 8 am to 10 pm.

Services between Liverpool Street and Shenfield, and Paddington to Heathrow and Reading will continue to operate on Sundays as usual aside from any planned weekend closures.

Before the Elizabeth Line, a journey from Paddington to Canary Wharf would take 30 minutes. But traveling on the Elizabeth line reduces the travel time to 17 minutes.

According to the travel app Citymapper, platform-to-platform journeys between Liverpool Street and Paddington will be cut from 18 minutes to 10 minutes.

When heading outside of the central stretch, it should be noted that the Elizabeth Line trains stop at local stations, so journeys will be slower compared with the fastest mainline services. This affects the sections between Reading and Paddington or Shenfield and Liverpool Street. But once the three sections are integrated, passengers will benefit by not having to change between trains and tube services.

Connecting Heathrow Airport to Canary Wharf has got to be good for international businesses in the Docklands. Convenience over time may well win the travelers’ choice.

Any journey within zones 1-6 costs the same on all tube lines. So, you could get the Central Line or the Elizabeth Line to Liverpool Street and pay the same fare. Outside of the TfL zones, fares are the same as those on the pre-existing TfL rail services.

Oyster cards can be used between any stations in zones 1-6, as well as out to Shenfield in the east. Stations beyond West Drayton to the west, however, do not accept Oyster. It is recommended to use contactless payment. (Tapping your bank card on the reader.) The Elizabeth Line is also part of TfL’s Pay As You Go capping system, which means the maximum you will be charged for a day’s travel is £14.10 (2022 rate).

From today (24 May 2022), limited edition (1.2 million) Elizabeth Line Oyster cards are available from ticket machines at the Elizabeth Line stations, all Zone 1 tube stations, and Heathrow stations. It costs £5 plus the travel credit you want to add.

The lines from Reading, Heathrow, and Shenfield will connect with the central tunnels. This means customers traveling…

The separate sections of the Elizabeth Line will be fully connected and services run to the final timetable.

24 trains an hour will run at the busiest times between Paddington and Whitechapel.

The London Transport Museum has an extensive range of homeware and accessories in the Elizabeth Line moquette. I already have the socks and the face mask.

The new moquette was created by British textile design studio Wallace Sewell in 2015. The purple color reflects the royal connection with Queen Elizabeth II, who the Elizabeth Line is named after, and matches the purple of the Elizabeth Line on the London Underground map. The pinstripe details of the pattern are a reference to the suits traditionally worn in the City of London. The lines aim to create a sense of speed.

The Elizabeth Line is using a combination of amazing new stations and upgraded stations that were there already. This means the long trains – over 200 meters (650ft+) long – do not fit on all of the station platforms. You’ll know when you’re at a shorter station as there is an announcement that the doors in the rear carriages will not open so you need to walk through the train to another carriage to exit.

This doesn’t affect the central section of the line although at Paddington the center door on each of the rear 6 cars cannot open due to platform curvature.

The Elizabeth Line is mostly using 9-car trains. In the central section of the line, the platforms have been built even longer than this to ‘future proof’ things. If a 10-car train is needed to increase capacity, it will still fit in the new stations.

So, on the Elizabeth Line’s first day, I’ve been out to see what it’s like. I started my journey at Paddington so I could take a trip all the way to Abbey Wood in southeast London. I then did the return journey from Abbey Wood and got off at Liverpool Street station.

The line opened around 6.30 am but I didn’t aim to be on the first train as some people had queued overnight for that treat. Even so, I was on the Elizabeth Line within the first hour and then left before the rush hour got too intense.

“This is the train to Abbey Wood via Canary Wharf.”

Firstly, the Elizabeth Line is noticeably quieter and a much smoother ride compared to other tube lines. The walk-through trains have a variety of seating options including two seats opposite two seats to the more usual along-the-wall seats. There are plenty of flip-down seats too so they can be flat if the space is needed for wheelchairs, buggies, or luggage.

The carriages are wider than usual so it feels more spacious. Are they taller too? It feels like it. The station platforms are wider as are the interconnecting corridors too. It all reminded me of the Jubilee Line at Canary Wharf but it all feels bigger and lighter. And it is very much wanted.

Everyone was taking photos this morning. From the be-proud-of-who-you-are train enthusiasts to the besuited city men grabbing a discreet shot of the Elizabeth Line roundel. Only about 1% of passengers were wearing a face mask (I was). It’s now advised and not a Condition of Carriage.

The air-cooled trains are a comfortable ride and the line is fast. Paddington to Abbey Wood took just over half an hour. If I had tried that route yesterday, it would have taken over 80 minutes and needed two changes.

Each carriage has a screen which switches between the destination, a section of the line map showing where you are, all tube line service report, noting which carriage you’re in (5 of 9, etc), the time, and the next station announcement. There are audio announcements for each station too.

I was surprised to see straphangers are back. These are the loops from the ceiling for standing passengers to hold onto when the train is moving. That would lead me to believe the trains are taller if these are needed as other lines now just have the bars.

On the way to Abbey Wood, the train first comes above ground just before Custom House station. And the whole journey just feels so fast. I almost took a ride back to Paddington just to check it was real. But I decided to get off at Liverpool Street to see another major station (and to let commuters have the train during rush hour).

While my plan today was to go to Abbey Wood and come back immediately, you might like to know what there is to do in the area. Sometimes we forget that place names can be quite literal. About a 10-minute walk from the station is Lesnes Abbey Woods which is a lovely park and woodland to explore with the ruins of the 12th-century abbey.

These gothic window arches make an interesting frame for the view of London beyond. And they give me an excellent reason to take another trip on the Elizabeth Line soon.