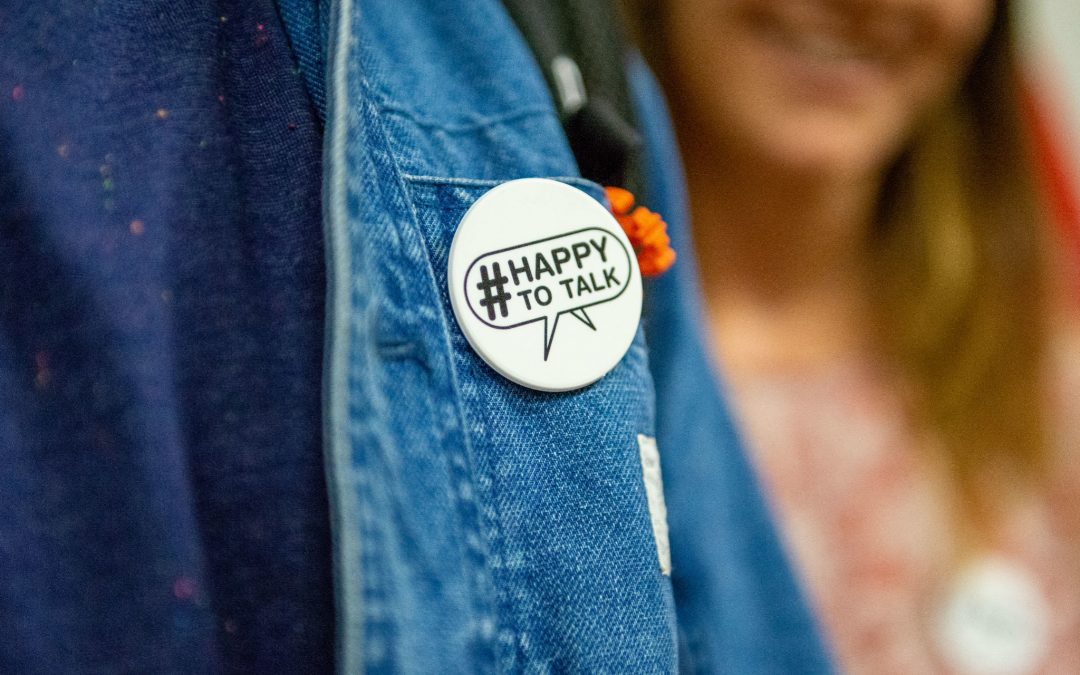 If there’s one thing that newcomers to London learn first, it’s that the tube isn’t usually the place for striking up a conversation. Our head-down commuter style means we avoid eye contact at all costs, let alone engage in a stop-and-chat with a stranger.

Londoner Chris Zair is trying to put a stop to the communal silent treatment by creating #HappyToTalk badges. Anyone who’s up for a natter can pin one on their jacket, and the hope is that strangers will start approaching each other to talk.

The idea came to Chris after a 20-minute conversation with a stranger on the Victoria Line last year. Like most of us, he didn’t make a habit of speaking to randomers – but the encounter lifted him up for the day and #HappyToTalk is his way of spreading the message that the occasional chat might benefit us all.

But wait: hasn’t this been tried before? You may remember a similar ill-fated campaign a few years ago. Jonathan Dunne, who had moved to London from a small town in Colorado, US, dished out ‘Tube Chat?’ badges to commuters in 2016. His intention was to inspire Londoners to indulge in daily conversations with strangers. Instead, the badges mainly resulted in a huge number of piss-take parodies. (If there’s one thing that really brings Londoners together, it’s taking the mick.)

Undaunted by this, and given the increasingly fragmented society in which we’re now living, Chris hopes that his latest attempt to get the city chatting won’t be met with the same ridicule. Early signs are positive: more than 400 badges have been ordered already. Each costs £5, with 40 percent from each badge going to Run Talk Run – a mental health support group that organises friendly group runs – and the rest or the profit to another charitable cause at the end of the tax year.

The new tube chat badges are available now, so if you’re up for connecting with strangers on a deeper level (see what we did there?), order yours via Happy To Talk.