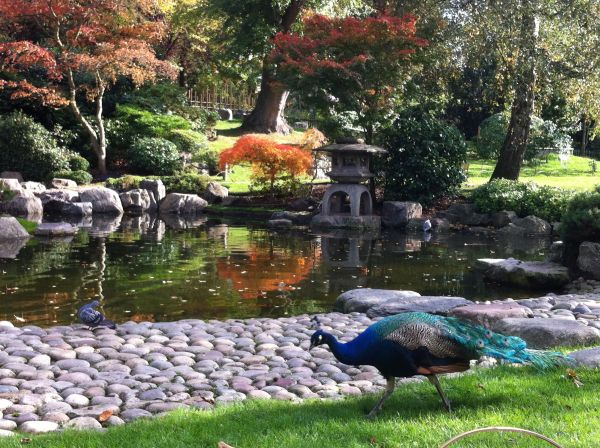 Despite its relatively small size compared to the more famous Hyde Park or Richmond Park, the area of Holland Park boasts many draws, including a playing field for pick-up games of football or cricket, an ecology centre, rugged woods for brisk jogs, and a hostel. The park even hosts opera performances in the summer!

My favourite part of the park is the peaceful Kyoto Garden, which is like a tiny pocket of Japan inside an English setting. When I first moved to London, my apartment was only minutes away. I would often spend time here to get away from the cramped space of my flat and the noise from my busy street.

The garden was opened in 1991 as a gift from Kyoto to commemorate the long friendship between Japan and Great Britain. The garden is carefully designed to reflect key traits of Japanese gardens, including stone lanterns, tiered waterfalls and plenty of fish. The crashing water is occasionally mixed with the squawks of peacocks who wander around the park. Despite these occasional birdcalls, a few minutes in the Kyoto Garden will have a restorative effect to your spirit.

The post Kyoto Garden – A taste of Japanese tranquility appeared first on Spotted by Locals London.