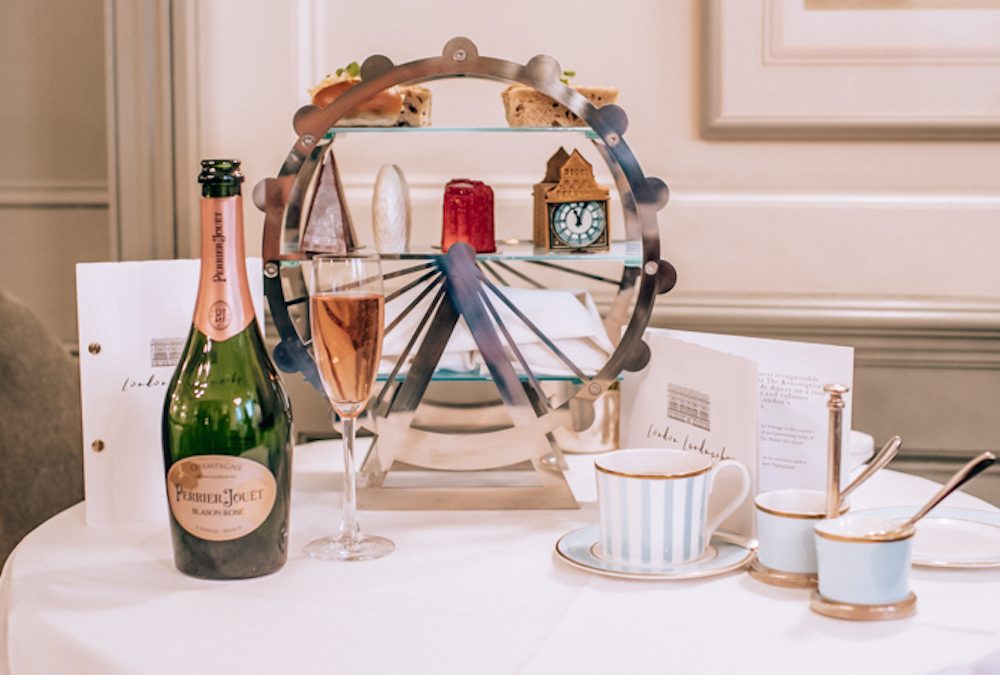 I was invited to attend The London Landmarks Afternoon Tea and my food was complimentary. I was not paid to attend and was not under contractual obligation to write this blog post or create content on any platform.

Town House Kensington at Hotel Kensington is certainly a place that knows how to do an afternoon tea as I found out last year when I attended the ‘Tale as Old as Time’ Beauty and the Beast themed afternoon tea. Following the huge sell out success of the previous tea, it was time for a change… introducing the soon to be iconic, London Landmarks afternoon tea!

I love blogger afternoon teas as they’re a really relaxed way to catch up with old blogger friends and meet new ones… it was great to catch up with Katie and Felicia and be introduced to some lovely new ladies as we enjoyed the roaring fire and glasses of Perrier-Jouët were poured. 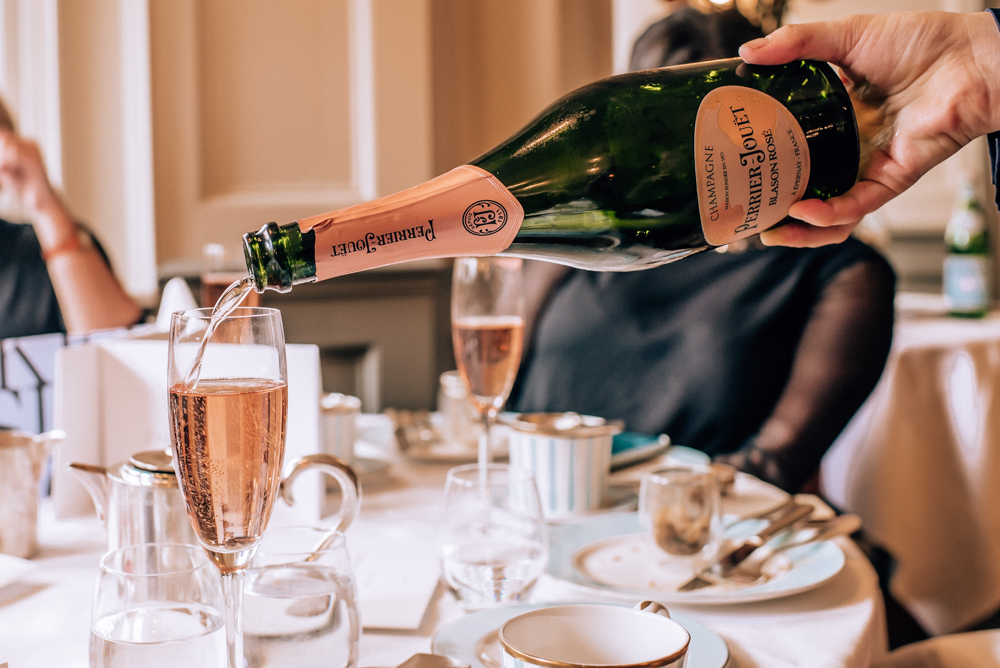 We also had a chance to look at the beautifully illustrated London map on the table. Drawn by Eleni Sofroniou, it’s a lovely keepsake of the tea and highlights some of London’s most well known spots such as Buckingham Palace, Westminster Abbey and Big Ben (minus the scaffolding!). Alongside the champagne there’s a vast tea selection to accompany the food, I opted for Wild Rooibus but there are lots of other options for black, white and green tea as well as herbal infusions. 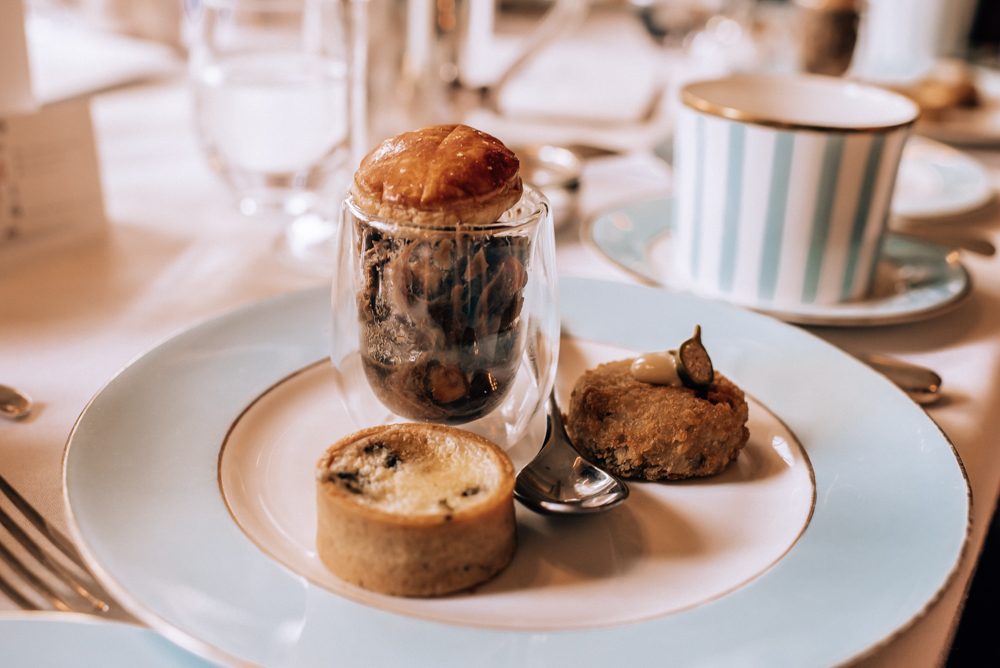 The Town House Kensington don’t let you go hungry and as with the Tale as Old as Time tea there are additional savouries to the requisite sandwiches. The steak and ale pie would please the jolliest cockney whereas the Colsten basset stilton and broccoli quiche is great from cheese lovers and there’s a bite-size crab cake with tartare sauce and caperberries. The ingredients are inspired by those that you might find at top London markets such as Borough, Maltby Street and Southfield, which all feature on the illustrated map. There are options for vegetarian, vegan and gluten-free too! 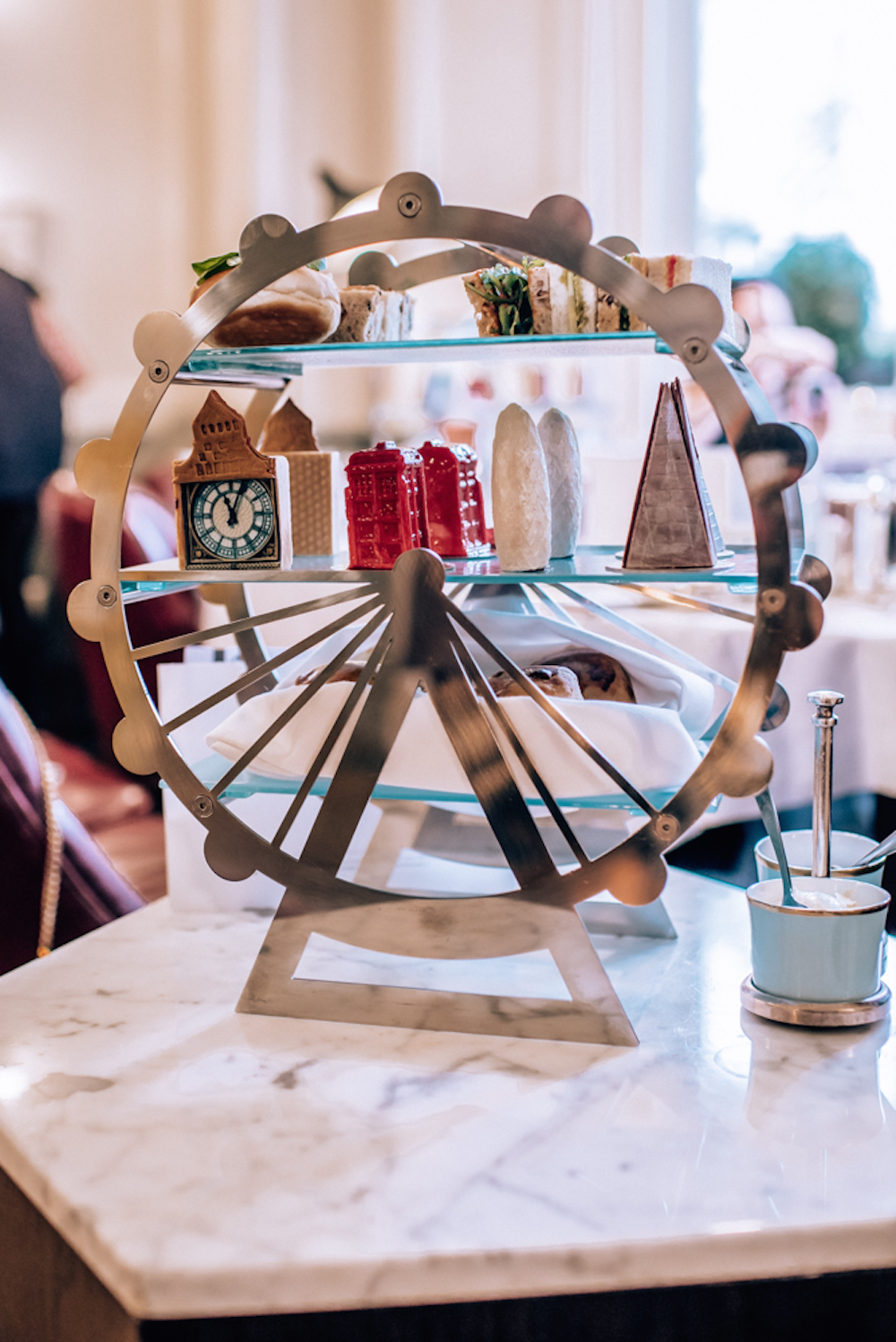 With so much choice of incredible afternoon teas in London, I love the way hotels are innovating and setting themselves apart. For example the tea stand themed around the London Eye is so unique and stunning, I’d love one of these in my own home. Located at the top of the London eye are the all important sandwiches… 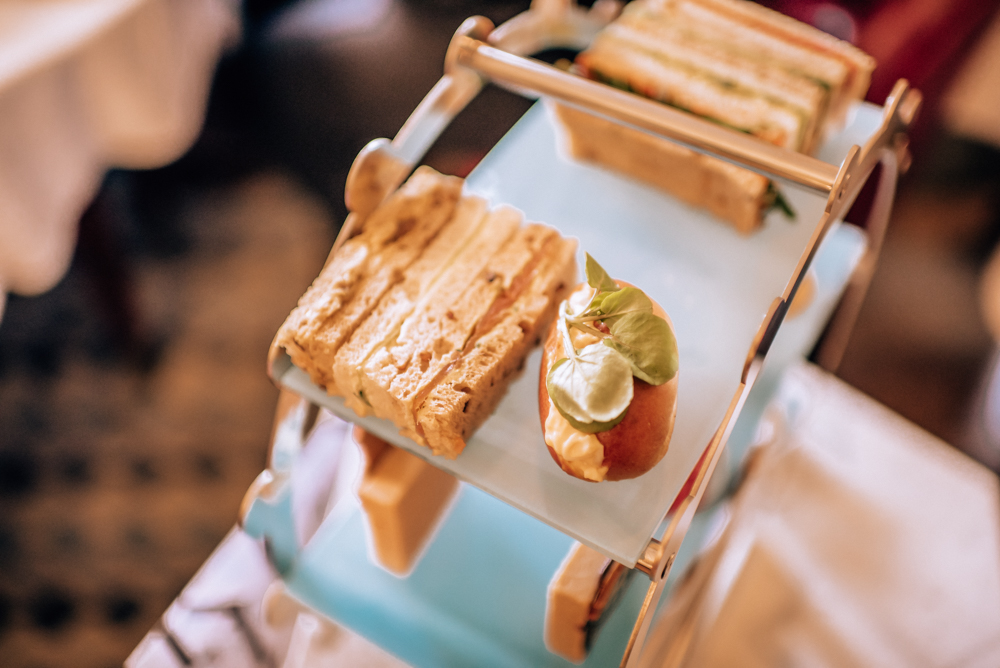 These represent the best of British with smoked salmon, lovage pesto and cream cheese on brown bread, classic cucumber and Coronation chicken, a dish famously invented for Queen Elizabeth II coronation in 1953. The egg and cress sandwich is a ‘London Bridge’ roll with eggs form Heritage breed Copper marans hens. At the bottom of the stand are classic fruit  and plain scones served with Heather Hills strawberry jam and clotted cream. 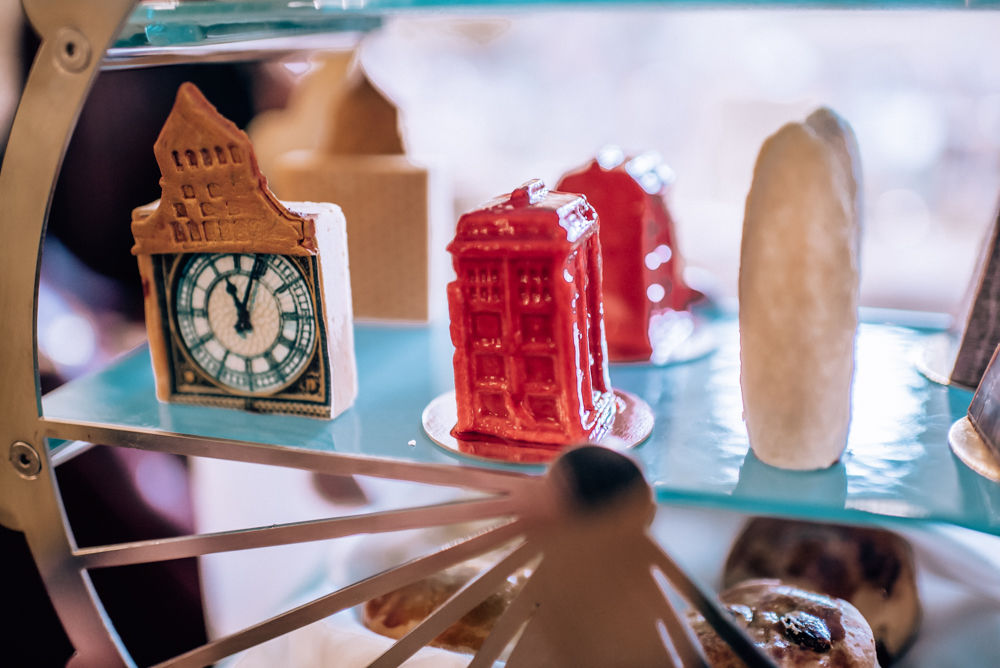 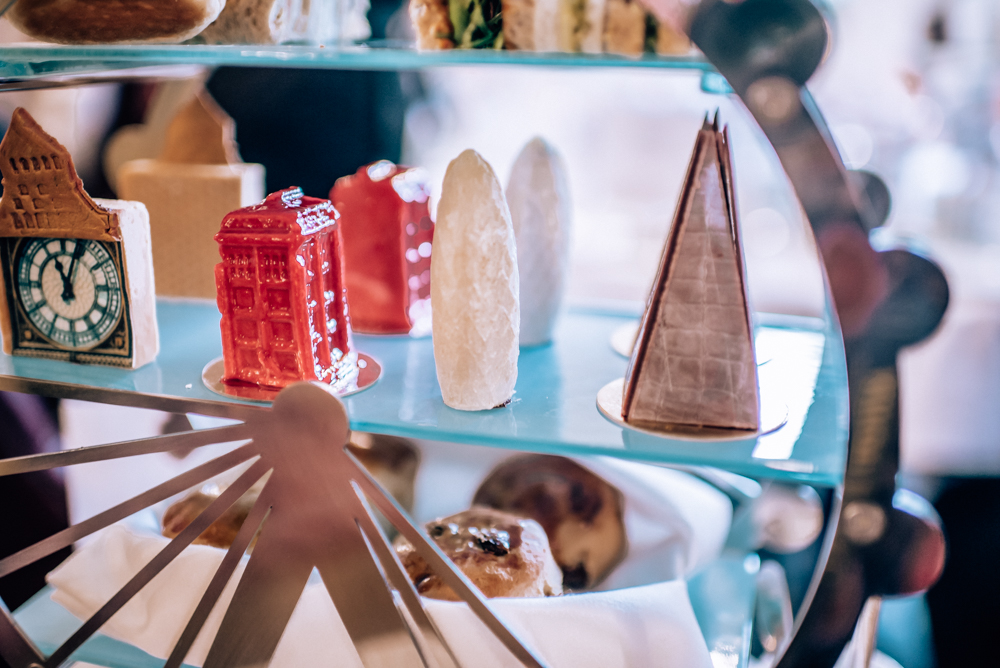 As usual the best bit in terms of aesthetics are the sweets which are very clearly inspired by London’s top landmarks and symbols. The Gherkin has long been one of London’s most recognisable architectural feats and this one is made from white chocolate with a dark chocolate ganache whereas London’s more recent addition, The Shard has been fashioned from carrot cake and milk chocolate. Once a London staple but now of out use and few a far between with the advent of the mobile phone, the classic red Telephone box has been made out of rhubarb mousse.

Perhaps the most well loved landmark of all… we fondly know it as Big Ben but did you know that Big Ben is actually the bell? The official name of the tower where the bell resides was once known as the Clock tower but it was renamed Elizabeth Tower in 2012 for the Diamond Jubilee of Elizabeth II. This particular confection was a lemon curd tart with the most delicious pastry surround. 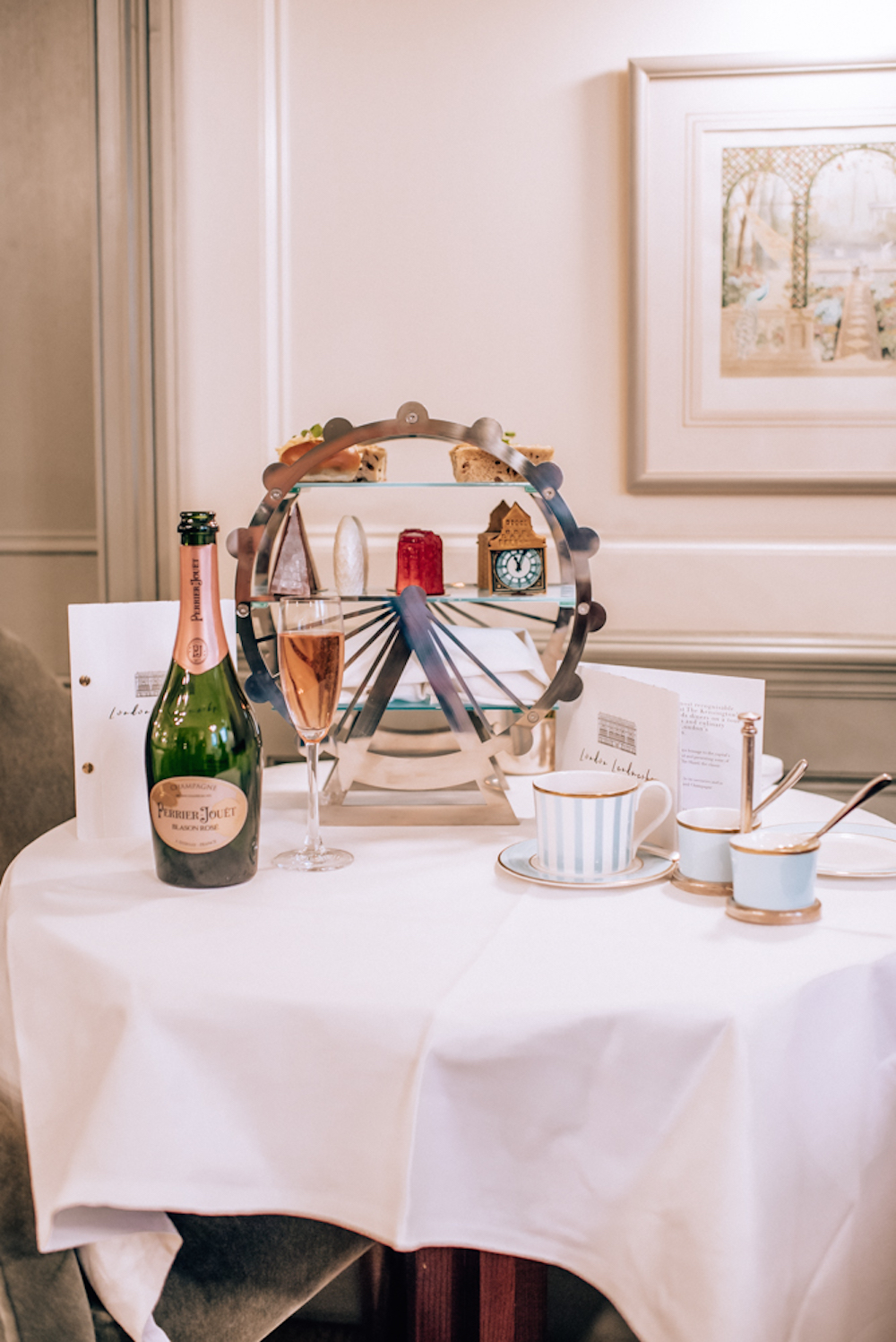 As usual tea, service and food was absolutely wonderful at Townhouse Kensington and the company was fantastic. Thank you again to the hotel for inviting me to experience their fabulous new tea!

The London Landmarks Afternoon tea is £42 per person with a selection of Rare Teas. Add a glass of Champagne for £12.50