Authentique – A taste of France in Tufnell Park 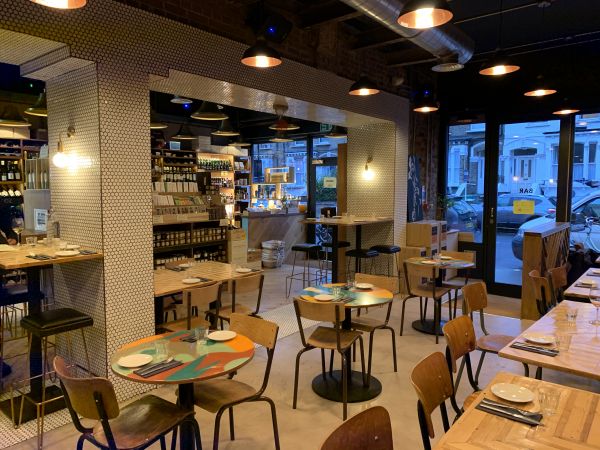 Tufnell Park and nearby Kentish Town are home to a sizeable French community, and the four guys behind Authentique Epicerie have crystallised the area’s Gallic air into a snappy new hangout that serves all kinds of purposes. Is it a bar? Is it a shop? Is it a cafe-cum-restaurant? Why, it’s all three, and they’re all as enticing as each other!

For me, Authentique has so far been a place to stop by for a drink or two: the wine list goes on and on, and the resident expert will guide you through it as much or as little as you like. Ask for some tasty cheese to nibble alongside; you can’t go wrong with the tomme de Corse, which comes paired with an intense fig chutney, or it did last time I was there. Part of the fun, though, is the sense that every visit will be slightly different, and indeed the hot meals on offer (at selected times – see website) are cooked up by guest chefs to keep the variety going. Each month, Authentique showcases a different francophone region, culminating in a monthly themed dinner.

Meanwhile, one section of the meticulously decorated venue sells cheeses, cured meats, jams and chutneys, bread and a range of other fine morsels, so you can recreate the magic at home whenever the fancy takes you. Bon app!

The post Authentique – A taste of France in Tufnell Park appeared first on Spotted by Locals London.