Best Traditional Fado Restaurants in Lisbon [for an authentic experience] 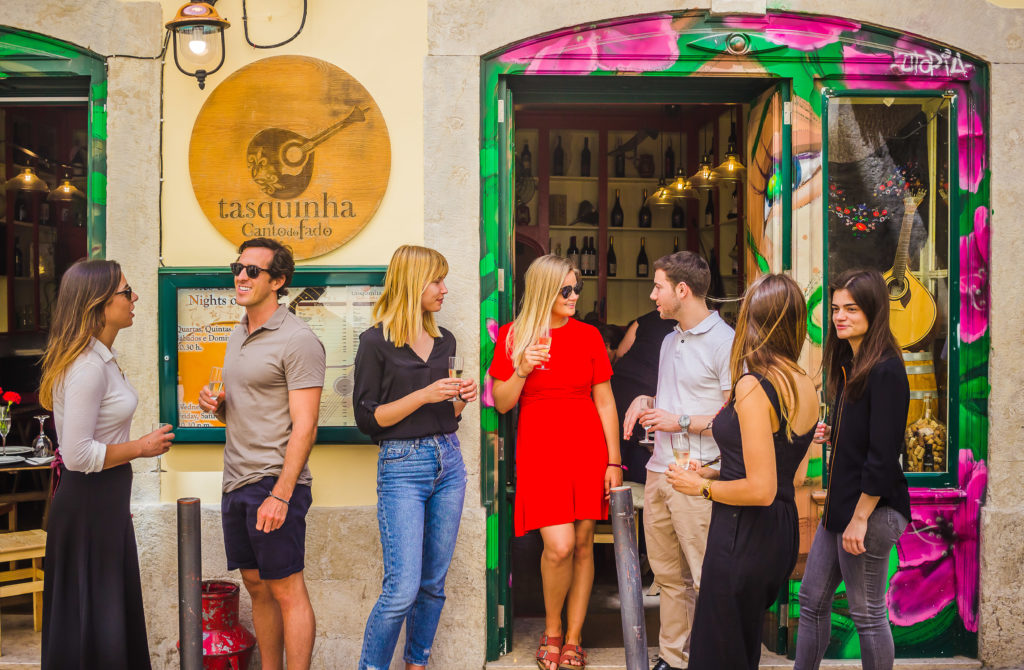 A trip to Lisbon would not be complete without a night in a fado house. Fado features high on the list of those experiences that are unmissable by nature of them being native to a particular place. In this case, the traditional Portuguese music of fado was born in the streets of Mouraria, one of the two oldest neighbourhoods in Lisbon.

What is Fado Music?

Legends vary, but the general consensus dictates that it originated around the 17th century as something very intimate and private, practised only in the home by the poor wives, children and mothers of sailors gone for long voyages to sea. Nowadays, fado is found mainly in the neighbourhoods of Bairro Alto, Alfama and Mouraria and is performed in the intimate setting of a fado house, where traditional food and drinks are also served.

There are two reasons why fado is so compelling, making it a must-do while in Lisbon. First, the word itself comes from the Latin fatum, meaning fate, and so a fado singer sings with the kind of passion that comes from a belief that being a fadista is their God-given destiny. Second, fado songs are, fundamentally, sung poetry. Some of them are old, traditional songs that have been passed around for generations and others were written by the fadistas themselves. They have normally romantic themes; love, loss, the sea, the city of Lisbon, but all fado songs have the same underlying emotion: saudade.

The understanding of this concept is imperative for anyone wishing to truly experience fado. It would require an entirely separate article to attempt to explain it (check out this one) but for now it suffices to say that it is an untranslatable Portuguese word that’s somewhere between nostalgia and longing and is an emotion that everyone can relate to, although they may not be able to explain it.

Therefore, even if you don’t understand a word of Portuguese, you will unquestionably feel something when you listen to fado live, since the music is evoking a universal, human sensation that transcends language and background. Once you have had your fill of the best foods in the city, it’s time to try another truly memorable experience with an evening in one of the best bars in Lisbon to listen to Fado.

Widely considered to be one of the most traditional fado houses in Lisbon, Tasca do Chico originated in Bairro Alto but now has a second restaurant in Alfama. It is normal to see a small queue of people, tourists and locals alike, on any given night at the nondescript door of Tasca do Chico.

The place is an old tavern that had a makeover in 1993, whose walls are almost totally covered in pictures of fadistas and where you can listen to fado vadio (sung by non-professionals), the voices of the latest talents or sometimes just a local who’s stopped by to sing a song or two.

Fado ao Carmo, lying down an inconspicuous side street in the city center, is a relatively new gem in the fado scene. It showcases an innovative menu that goes a little further than your average fado house cuisine.

As well as having some of the newest vocal talents in the genre, this house is a perfect example of preserving the tradition of the past in a setting that looks towards the future. It is unsurprising, then, that many of the musicians are the descendants of some 20th-century fado greats!

Found on a tranquil and picturesque street in Fado’s birthplace of Mouraria, the first thing that strikes you about the Tasquinha is the decoration. On the front door is a mural from Lisbon resident street artist Utopia, whose work is instantly recognisable by its anime-style female faces and myriad colours.

Inside, the whole place is fado-themed, including the giant guitar hanging from the ceiling in the back room. The atmosphere is cosy and familial and the menu full of delights. Want to have the chance to sample a mouth-watering dish you won’t find on the menu? Take our Undiscovered Lisbon food tour!

The Neo-Moorish design of this building and the waiters serving gourmet dishes and gin and tonics means it stands out from a typical Lisbon fado house by seriously amping up the glamour factor. A truly unique way to experience this musical magic.

A Tasca do Jaime

It doesn’t get more authentic than the Tasca do Jaime. Not strictly a fado house, this tiny restaurant plays host to spontaneous episodes of fado vadio on Saturday and Sunday afternoons, with a small piece of paper in the window reading “Fado Today” being the only form of advertising.

The Tasca do Jaime is squeezed onto the main street of Graça, a charming and chaotic neighbourhood, and is so small that you can practically touch the passing Tram 28 from a seat next to the bar. A popular drop-in spot for locals, the food here consists principally of petiscos, the Portuguese equivalent of tapas.

Fado, a cornerstone of Portuguese culture for many centuries, can be found across the city. Although the music itself is firmly rooted in tradition and history, our pick of the best bars in Lisbon to listen to fado range from typical tascas to modern and truly unique settings. However you experience it, it will surely represent an unforgettable moment of your trip to Lisbon!