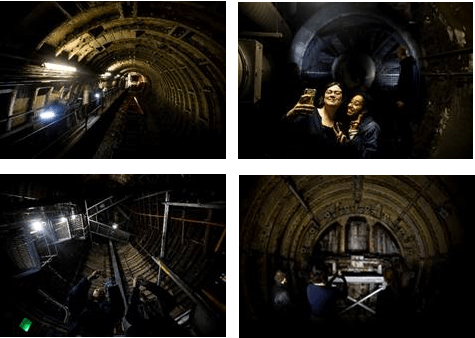 The Hidden London tours run by the London Transport Museum are some of my favorite special tours to go on in London. We’ve been on several over the years, as has our London correspondent Laura Porter. Tickets will go on sale very soon for their next roster of tours, and this time around they have added a new one – an exploration of the Moorgate Disused Station.

The brand new Moorgate Metropolitan Maze disused station tour has been added to the latest season of Hidden London tours, organised by London Transport Museum – just in time to buy as an unusual Christmas gift for loved-ones or friends.

Visitors will be able to discover a secret underworld of atmospheric dark passages as they explore the wonders of Moorgate station, the portal into the City and one of London’s first Underground stations.

One of the highlights of the tour is seeing an original Greathead Shield from a planned tunnel extension, abandoned in 1904. The shield was a cylindrical tunnelling machine with an extended rim that supported the earth and protected the workers inside, used to dig London’s Tube tunnels from the 1870s to the 1980s.

The relic, which has been left abandoned on site, is the only complete one of its kind on the London Underground network.

Moorgate station opened in 1865 as Moorgate Street on the first extension of the Metropolitan line. Remarkable re-designs and station upgrades have left behind a maze of disused tunnels and abandoned track.

This is a rare opportunity for guests to visit corridors lined with the original glass tiles of the City and South London Railway, hear how the station served as a freight terminal for decades and see how long-disused parts of the station – some of which became disused as early as 1922 – have been ingeniously repurposed for the present day.  The sections of the station that people will visit became redundant when this busy station interchange was remodelled to meet increased passenger numbers in a growing capital.

The Hidden London programme offers a range of tour packages to suit people’s different tastes. Film fans should go on the Charing Cross disused station tour and complimentary Skyfall film (2012) screening or the Aldwych tour and complimentary Darkest Hour (2017) film screening. Charing Cross is used as a filming location for series such as Killing Eve (2019) where Eve (actress Sandra Oh) stands on the platform in a chilling scene and Aldwych features in the Stan and Ollie (2018) movie.

Tickets go on sale TODAY – so we would advise you to book your tickets as soon as possible.