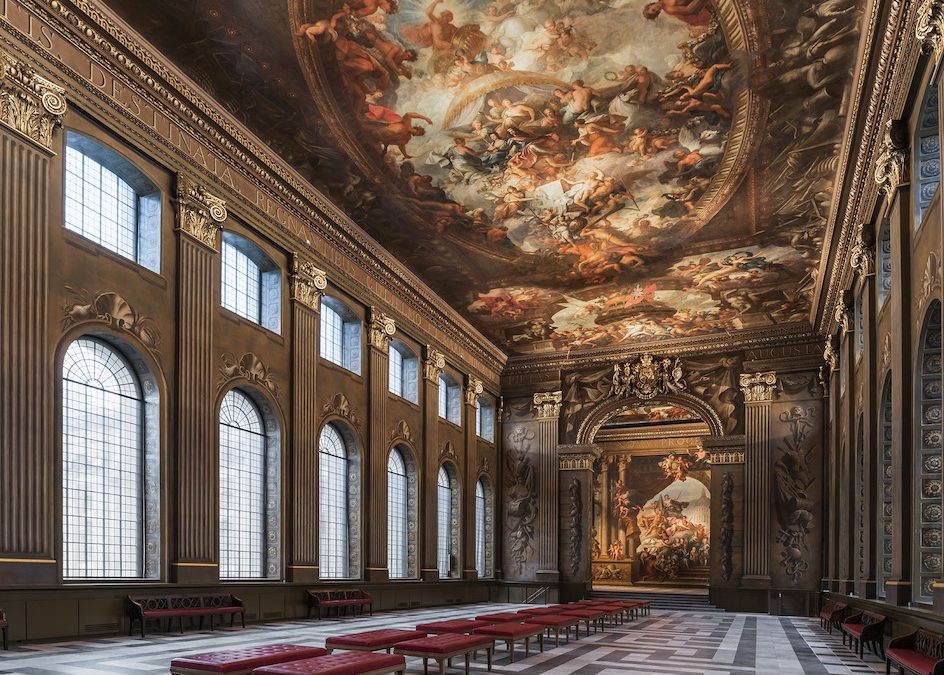 Editor’s Note: We have a real treat this week – Laura was given an exclusive tour of the newly restored Painted Hall in Greenwich before its re-opening so we’re chuffed to bits that she’s written up a huge report about it. Please consider subscribing to the Londontopia Magazine as it allows us to commission great articles like this.

As reported here recently, The Painted Hall at the Old Royal Naval College in Greenwich will reopen in March 2019. And I’ve been to see it already!

I was lucky to be the first to see the newly-restored masterpiece as I got a tour with William Palin, Painted Hall Project Director and Conservation Director at the Old Royal Naval College. The two-year £8.5 million conservation project has been finished on the Painted Hall itself, but the visitor experience is being enhanced with a new café, shop and interpretation gallery (The Sackler Gallery) in the restored Undercroft.

What is The Painted Hall?

The Painted Hall is the centerpiece of the Old Royal Naval College, Greenwich. (And the Old Royal Naval College is the centerpiece of Maritime Greenwich, a UNESCO World Heritage Site.) Designed by Sir Christopher Wren as a ceremonial dining room for what was then the new Royal Hospital for Seaman, the Painted Hall was completed in 1705. It always was a grand room and was actually not often used by the seaman.

The vast decorative scheme was painted by Sir James Thornhill, the first British artist to be knighted. Started in 1707, it took 19 years to complete.

Even if you have never been here, you may well recognize the Hall as it is a popular filming location. It appeared in Octopussy (the 1983 James Bond film starring Roger Moore),  The Golden Compass (2007), Lara Croft: Tomb Raider (2011), Pirates of the Caribbean: On Stranger Tides (2011) and many others.

What Are the Paintings About?

The paintings celebrate England’s naval power and mercantile prosperity, as well as its newly installed protestant monarchy. Successive monarchs William III and Mary II, Anne and George I join a cast of hundreds of figures, mythological, allegorical, historical and contemporary. The scheme’s celebration of the English protestant monarchy was set against the perceived autocracy of predominantly Catholic Europe.

The late 17th and early 18th centuries were a time of great uncertainty in Europe, with competing powers sparring for control of the continent and grand alliances made between nations to prevent dominance by any one European state. The story presented in the Painted Hall is one of stability and prosperity in Britain, underpinned by the nation’s naval power and benign constitutional rule. The section of the ceiling in the Upper Hall (furthest from the entrance) honors Queen Anne whose reign oversaw the unification of Great Britain (when England and Scotland formed a union in 1707).

The main section of the ceiling, in the Lower Hall, features William III taking an olive branch from a figure representing peace and passing the ‘cap of liberty’ to the kneeling figure of Europe. At the same time, the king tramples on a crouched figure representing arbitrary power and tyranny – a thinly veiled portrait of Louis XIV of France.

The last restoration project in the Hall was in the 1950s, but the paintings had since deteriorated, with large areas of ‘blanching’ or whitening covering the surface and obscuring the detail. Evidence was uncovered of previous restoration projects over the Painted Hall’s 300 years with as many as 30 signatures from previous ‘restorers’ found. I was told one was indelicately placed on the bosom of Mary II.

This ground-breaking project to clean and conserve the paintings started in 2016. For two years, a small team of conservators have been working to stabilize and rejuvenate the paintings. This involved careful cleaning and touching up where colors were being lost.

The project was also one of the largest open access conservation projects in Europe. Between 2017 and 2018 an accessible observation deck gave over 80,000 visitors the opportunity to observe the conservators at work for ‘scaffolding tours.’ I didn’t get to see this, but the amazing photographer Peter Dazeley was able to take some fantastic images. (He has given us permission to share them here.)

As the painted surfaces were cleaned, new details were uncovered that revealed how Thornhill planned and executed this vast work. Shadows of corrected details appeared behind later paint layers, and large areas of beautifully detailed history painting emerged from behind dirt and decay. In the Upper Hall, you can see a ‘ghost hand’ near the lower edge of the back wall that could have been part of a previous painting that was them obscured with revised plans.

And the results are incredible. This conservation has reversed years of decay and conserved the Painted Hall for generations to come. The color, clarity, and richness of the paintings is truly striking. Clever non-obtrusive LED lighting has been added, and there are blinds at the large windows that I didn’t notice immediately as light can still get through.

The blinds were introduced to stabilize the Hall’s environment and ensure the long term preservation of the paintings.

Seating has been provided along the walls with a series of finely-carved oak naval benches. These were made when the Hall served as an art gallery in the 19th century but had been in the National Maritime Museum archive storage for over 100 years. Down the center of the hall is a new collection of elegant ‘day beds’ so visitors can sit, or lie down, to look up at the amazing ceiling.

Previously, visitors may have come in and, while impressed by the painting, they probably didn’t know what they were looking at. Now, there’s a multimedia guide with 60 minutes of content and a printed guide for independent exploring, plus guided tour options too. Throughout the day there will be live talks from the in-house experts to bring the paintings to life for visitors. An audio-described tour will also be available for partially-sighted and blind visitors, and digital tablets will be available, loaded up with a virtual tour of the hall, allowing visitors to zoom in to details on the ceiling.

The building can also be accessed via a lift in the Undercroft that takes you up to the Painted Hall making the building wheelchair-accessible for the first time.

Two ‘treasure chests’ are in the Hall with thirteen handling objects related to the ceiling. So you can look up at King William while wearing a cloak and crown. Or hold a replica of the ‘Red Cap of Liberty’ (symbolic of freedom) that he holds in his hand. Or hold classical goddess Athena’s shield, depicting Medusa.

Families can try new trails and sensory backpacks. (My 12yo was actually excited when we heard about this as they have something for different age groups.)

The entrance is now on the side of the building so the front door being open all the time doesn’t cause such extreme environmental changes for the hall. But don’t worry as that doesn’t take away the wow factor at all.

The entrance is now via the King William Undercroft with a door on the side of the building. This grandly proportioned vaulted space  – designed by Christopher Wren and his Clerk of Works, Nicholas Hawksmoor – has been restored and transformed. Do notice the obelisk with zodiac images from Thornhill’s illustrations that the trainee stonemasons who worked on this conservation project has made.

This was once the day-to-day dining room for the naval pensioners, and you can dine here too as a café has been added. The café tables will have reproductions of the Thornhill paintings so you can study them while having tea and cake.

There’s also a shop going in here and The Sackler Gallery where visitors can learn about the history of the Painted Hall and how Thornhill created his masterpiece, plus a section about the conservation. Within this interpretation gallery, you can also see two rooms from Henry VIII’s long-lost Greenwich Palace. (Greenwich Palace was the favored royal palace of Henry VIII, who was born at Greenwich along with his daughters Mary I and Elizabeth I.) These were found beneath a concrete floor and include a cellar containing a series of unusual niches. Archaeologists believe these may be ‘bee boles’ for the keeping of skeps (hive baskets) during the winter months when bee colonies hibernate.

There was a concern that these would need to be filled in as there was no budget to preserve them, but an extra £250,000 of funding was found so we can now look down on these rooms in a new permanent display.

All of this provides an environmental buffer before ascending to the Painted Hall. The sweeping staircase brings you into the Hall right by the previous entrance, so the impact is just as good.

I would love to show you more, but the ORNC team has asked me to hold off on sharing any more photos as they don’t want me to spoil the surprise too soon. But with only days to go before tickets are on sale, and then a few more weeks and we can all go in, you won’t have long to wait.

A visit to the Painted Hall is no longer free. This has been an expensive conservation project, and the Old Royal Naval College has decided to improve the visitor experience to make it worth the new admission fee. All tickets are valid for unlimited re-entry up to a year after purchase.

On the first Wednesday of each month, there will be a ‘pay as you wish’ day.

There is no charge to visit the café, shop or The Sackler Gallery.

Laura’s London: Take a First Look at the Beautiful Restored Painted Hall in Greenwich – Re-opening in March! – Londontopia – The Website for People Who Love London