Open your eyes, look up to the skies and see Queen illuminated on Carnaby Street 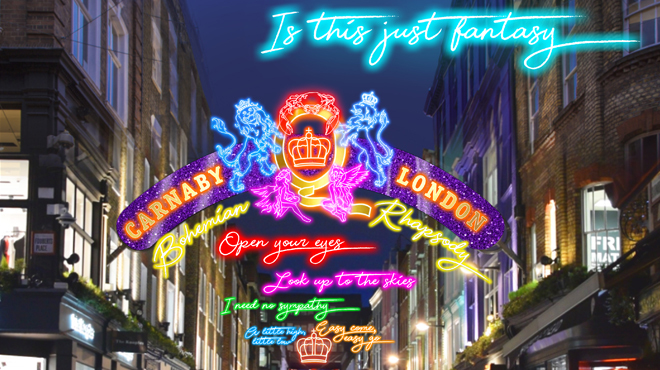 If you stroll down to Carnaby Street this winter and tilt your head upwards, then you’re likely to see a little silhouetto not of a man, but of some rather famous lyrics.

Lighting up the famous shopping street between October and January, the iconic opening lines of Queen’s epic mega-smash ‘Bohemian Rhapsody’ will be adorning the road to celebrate the release of the film of the same name – due to hit cinemas on October 24th.

Though the colourful neon illuminations will crop up across the festival period, however, bods from Carnaby Street are keen to clarify that there’ll be some more traditionally festive additions to Queen’s ‘art installation’ added later in the season. Phew.

But if the only man in a bright red jacket for you is Freddie M himself, then get yourself down for a very Instagrammable pilgrimage this winter. Unlike the song’s poor hero, we will totally let you go.