The Fiver – Five of the Highest Bars in London 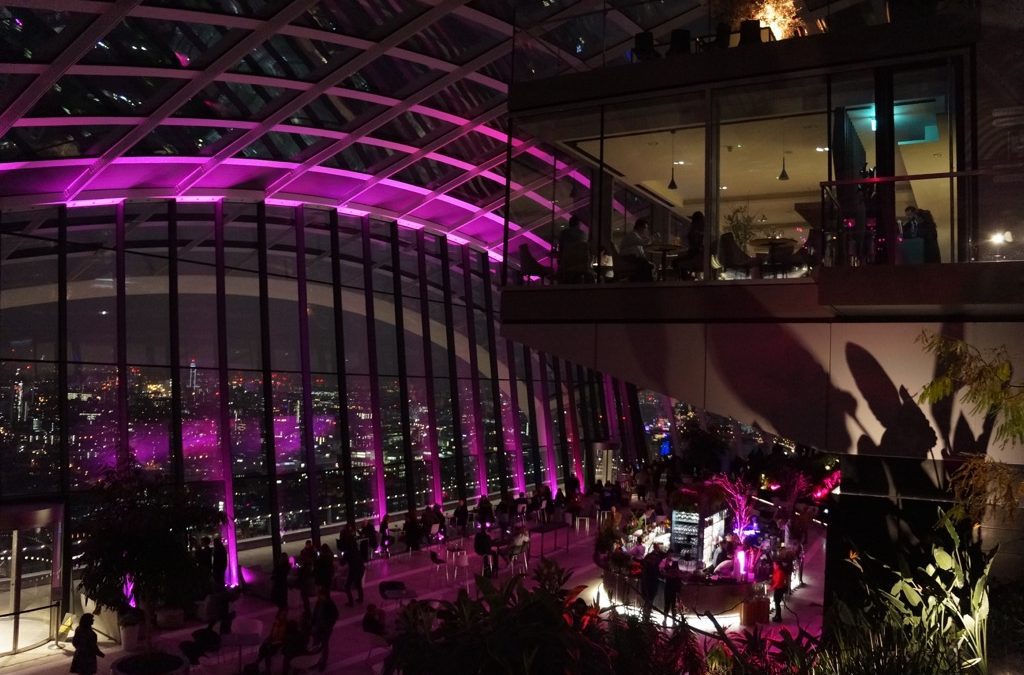 One of the best things to have with a good drink is a view.  Lots of places out there have rooftop bars or observation towers where one can get a cocktail, a pint, or a glass of wine and gaze out over the horizon.  London certainly has its share of high-altitude drinking establishments that rank amongst the highest in the UK and in Europe.  Whatever you’re in the mood for, each of the five places below can guarantee that you’ll have the best view of any bar patron in London.  Let us know your own favorite high-altitude bars in the comments.

Formerly known as The Rumpus Room, 12th Knot is perhaps the highest rooftop bar in London, sitting on the 12th floor of the Sea Containers building in South Bank.  As such, it puts patrons just about level with most London buildings and landmarks, providing excellent views of St. Paul’s Cathedral, the Gherkin, and the Leadenhall Building.  12th Knot has a smart casual dress code, so be sure to dress appropriately, and you can go without a reservation, but it won’t guarantee entry.

About one-third up the Shard’s 95 floors, Aqua on the 31st floor is a smaller bar and restaurant that offers panoramic views of the city along with cocktails, beer, and wine.  Food is served in the main part of the restaurant, although the atrium bar is the place to go, especially since no reservations are taken to sit there.  You can still order some of the modern British cuisine here, though, but it makes for a  better spot to have a drink.  The dress code is stated to be smart casual, same as 12th Knot, so trainers (that’s tennis shoes for us Americans) are not allowed.

Found at the top of 20 Fenchurch Street, above the 35 floors used for offices and such, is Sky Pod.  While technically a rooftop bar, the Sky Garden on top of the tower isn’t exactly open to the air, so you won’t feel the wind on your face like you might at 12th Knot.  However, the view more than makes up for it, and the drinks are some of the tastiest at any altitude.  The dress code isn’t as fancy, but as Sky Garden is naturally ventilated, you’ll want to make sure you’re wearing appropriately warm clothing.

The second-highest bar on the list, Duck & Waffle can be found on the 40th floor of the 46-story Heron Tower.  Besides the grand view of London from such a height, perhaps the most notable part of Duck & Waffle is that it is the only one of these listed establishments that’s open twenty-four-hours-per-day.  The cocktails are a bit pricier than most places, but the bar serves sharable snacks that are quite affordable.  D&W is quite possibly the most affordable and best dining option you’ll find so far up in the London sky, so be sure to make your reservation.

And now we reach the highest point of this list of altitude-defying bars.  Of the 47 floors in Tower 42, 42 of them are open to the public and Vertigo 42 right at the top.  The champagne bar at Vertigo 42 is the highest of its kind in the city, and it is open not only to the tower’s residents but also the public, considering you make a reservation beforehand.  Tower Bridge, St. Paul’s, and the length of the River Thames are visible from high atop this drinking perch.  Of course, smart dress is required for such a fancy establishment.