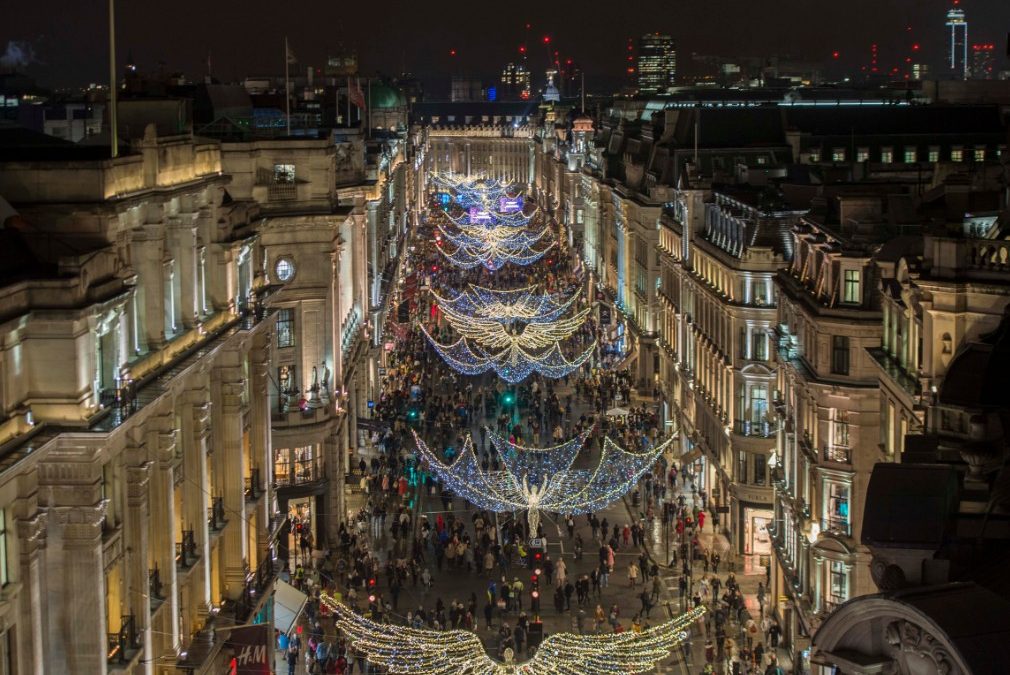 “Those Christmas lights, light up the street” and how they light up the streets of London.  From Oxford Street to Harrod’s, you can count on London to do it up big for the holiday.  Many big shopping districts and landmarks throughout Great London have incredibly impressive displays of decorations that shine and sparkle all season long and despite it being early November, many have already been switched on.  Wherever you find yourself in the city, we’ve outlined our top ten favorite displays of lights and scenes that you’ll want to see for yourself.  Let us know some of your own favorite London Christmas decorations in the comments and share a picture or two from your travels.

One of the shard’s most beautiful aspects its ability to illuminate the top twenty floors.  The colors change depending on the occasion, and you can bet the building will come up with something creative to celebrate the Christmas holidays.  This year’s display is called “Reflection” and is based on the numerous pictures people have taken of the building throughout the year.

Harrod’s Christmas displays in the store’s windows are some of the best in the city.  Harrod’s often partners with top designers such as Dolce & Gabbana, Burberry, and more to bring our wildest Christmas dreams to life.  And in addition to the windows, the store itself is lit from top to bottom outside and has an array of wonderful holiday decorations inside that you can marvel at while you get in some holiday shopping.

While the animals go to sleep after dark, London Zoo lights up with a magical trail that stretches on for a mile throughout the enclosures and animal houses.  You might not see any living animals, but there are plenty of incredible statues depicting the zoo’s residents and incredible experiences like a vortex of lights that will dazzle your senses.

Home to the largest Christmas tree in the city, Trafalgar Square’s tree is typically a Norwegian spruce somewhere between 50 and 60 years old.  The tree is sometimes selected months or even years ahead of time, and the lighting ceremony is one of the biggest events in Westminster.  Trafalgar Square is also lit up with a Christmas display of lights, and there is a manger scene as well.  If you get very lucky, you may arrive just as carolers begin their singing.

Carnaby’s Christmas lights are amongst the flashiest in London and this year is no different as the fourteen streets of this neighborhood have gone with a Bohemian Rhapsody theme in keeping with the new film.  It’s a must-visit for fans of the band Queen to see the band’s lyrics on display over the streets as you shop the many independent boutiques.

Marylebone hosts one of the biggest lighting ceremonies around and being London; they almost always get a celebrity to kick things off.  Even if you can’t make the ceremony itself, you can still wander through this area of London marveling at the lights and the Christmas stalls that set up to sell gifts and trinkets of the season.

Going on thirteen years now, Syon Park’s Enchanted Woodland lights up the 600-year-old gardens and turns them into a fantasy land.  The Great Conservatory at the center of the park is absolutely illuminated along with the rest of the gardens in some incredibly inventive displays.  Unlike most of the decorations on this list, however, Enchanted Woodland is a ticketed event, so you’ll have to buy your entrance from Syon Park’s website.

Last year Covent Garden went with a mistletoe theme that included over 40 mistletoe chandeliers, 700 berries, and a very large Christmas tree.  This area of London seems to be sticking with the theme for this year, so you can grab your partner and head there for plenty of chances for kissing.  There’s also a celebrity to light things up on November 13 and last year had Kylie Minogue, so who knows what this year has in store.

Certainly one of the poshest lighting displays in all of London, Regent Street is the all-white light Christmas tree compared to our next entry’s more colorful display.  It’s certainly fitting for shopping district that features more luxury shops and boutiques than the rest of London.  It appears Regent Street will feature its glittering angels yet again this year, so be sure to enjoy the absolute beauty of the spirits.

Year in and year out, Oxford Street has the most impressive display of lights of any shopping district or neighborhood in London.  The glowing orbs hanging overhead are like having Christmas ornaments hanging in the air, joined this year by purple baubles for a total of 1,778 decorations.  These join the window displays of the many shops along the street to make for the most magical experience, blending the high-brow with the conventional to make for a Christmas experience that will suit everyone.