Fancy a Pint? Ten of London’s Most Beautiful Pubs 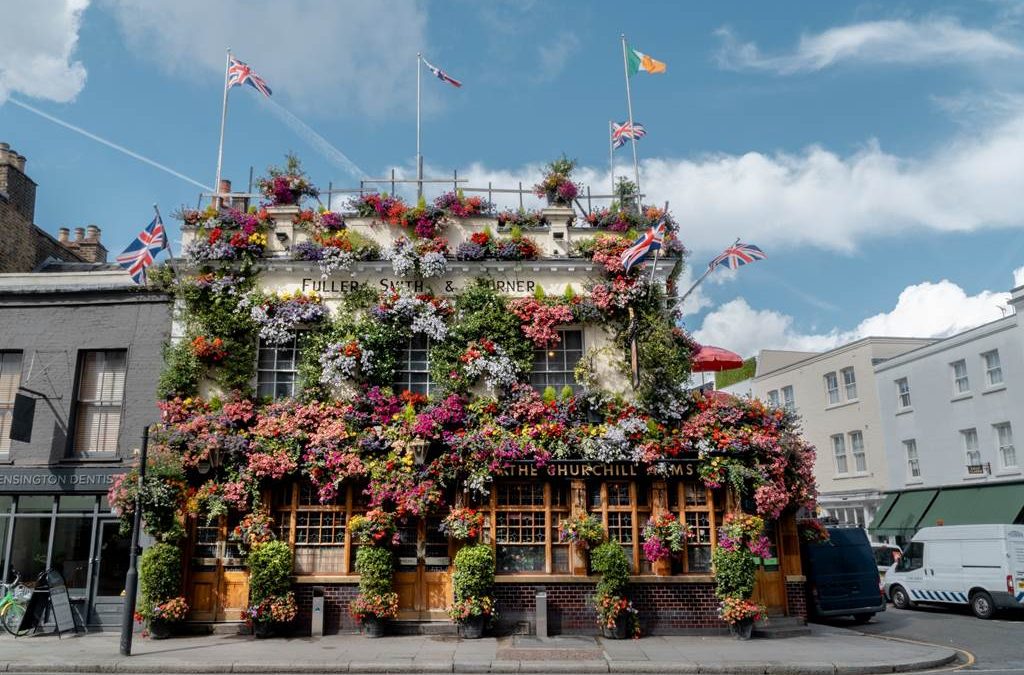 When it comes to a good pub, the ale is the thing you’re looking for most, then the food, and then the atmosphere.  Of course, the appearance of any pub is an important part of the experience, and whether you’re looking for your new local or visiting from out of town, you want to be in a place that meets your expectations.  Plenty of London’s pubs are beautiful places inside and out with plants, wood, and even stained glass helping to make them truly memorable places to have a drink.  We’ve identified ten of the best-looking pubs in the city below, and you can let us know your favorites in the comments.

Starting with one of London’s most historic pubs, The Dove in Hammersmith is a Grade II listed pub that dates from the 18th Century.  The outside is rather unassuming, but with a quaint charm, and the inside is everything you would expect a pub to be.  It has wood floors, old pictures adorning all the walls, brick fireplaces, and the bar itself is a black wooden affair that screens tradition. 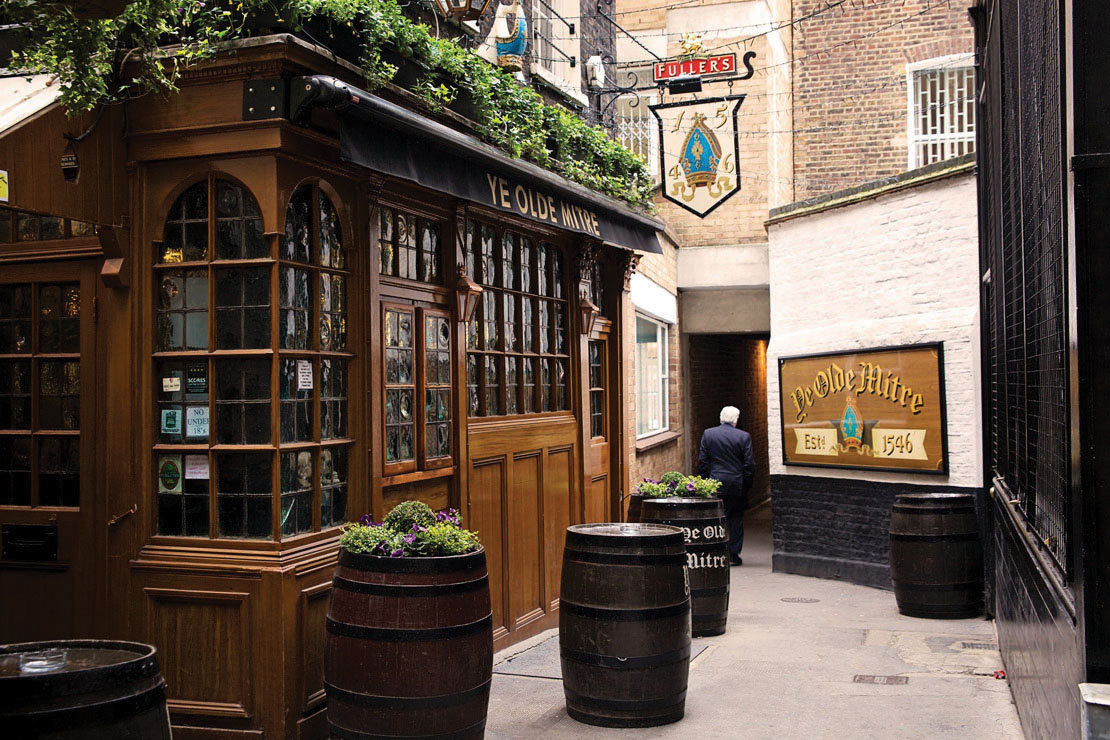 From one Grade II listed pub to another, Ye Olde Mitre is also one of the oldest pubs in the city with the original pub on this site serving ale since 1546.  The exterior is certainly one of the charms, especially when you go down the alleyway to find its wood and glass exterior greeting you like a diamond in London’s ruff.  The interior is cozy and features wood panel walls, charmingly garish carpeting, and plenty of wooden chairs and benches that give it a classy feel. 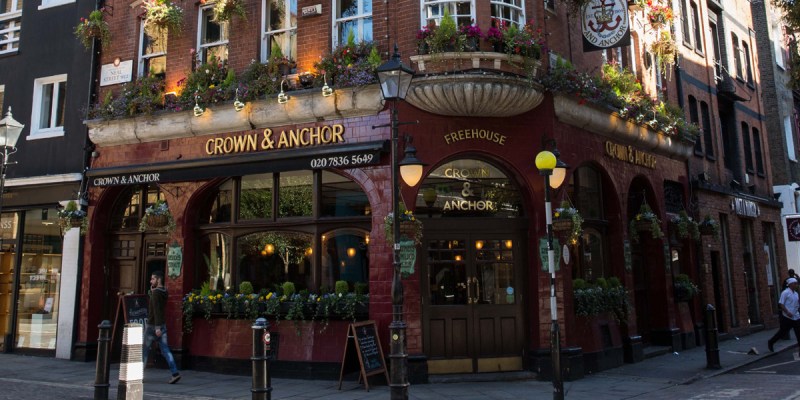 The Crown & Anchor is in a beautiful three-story building in Covent Garden with the first floor as a traditional pub and the second featuring a bar and restaurant.  Plants hang outside the windows on every level and the large windows not only look splendid, but they really let the light in to highlight the wooden columns and the green-painted walls. 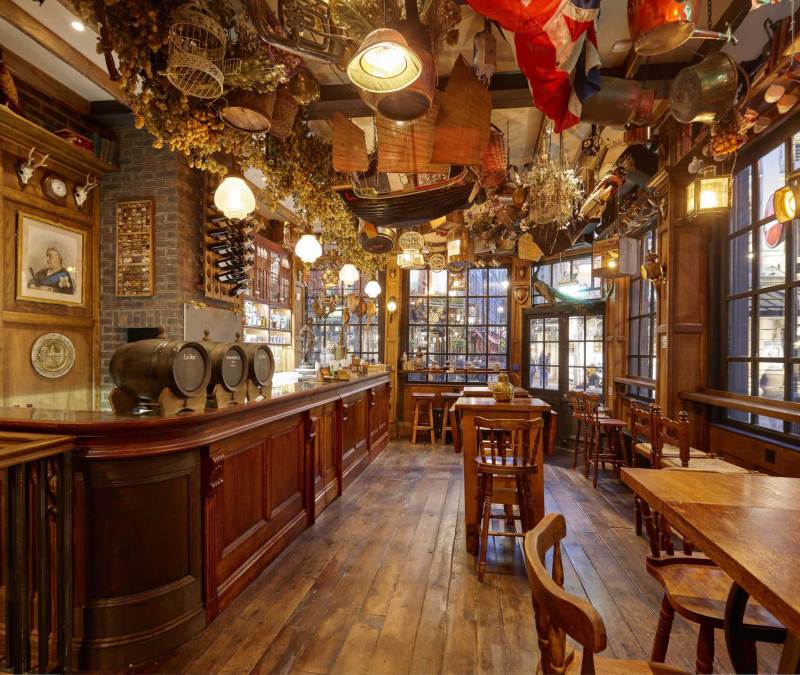 Form something wonderfully eclectic; you can visit Mr. Fogg’s Tavern in Covent Garden is one of many drinking establishments in the city patterned after the protagonist of Around the World in 80 Days.  The pub’s story is that Phileas Fogg’s aunt left this traditional Victorian pub to her housekeeper who covered the insides with memorabilia in keeping with the surrounding theaters.  This gives it a much different look to other pubs since it has a literary theme 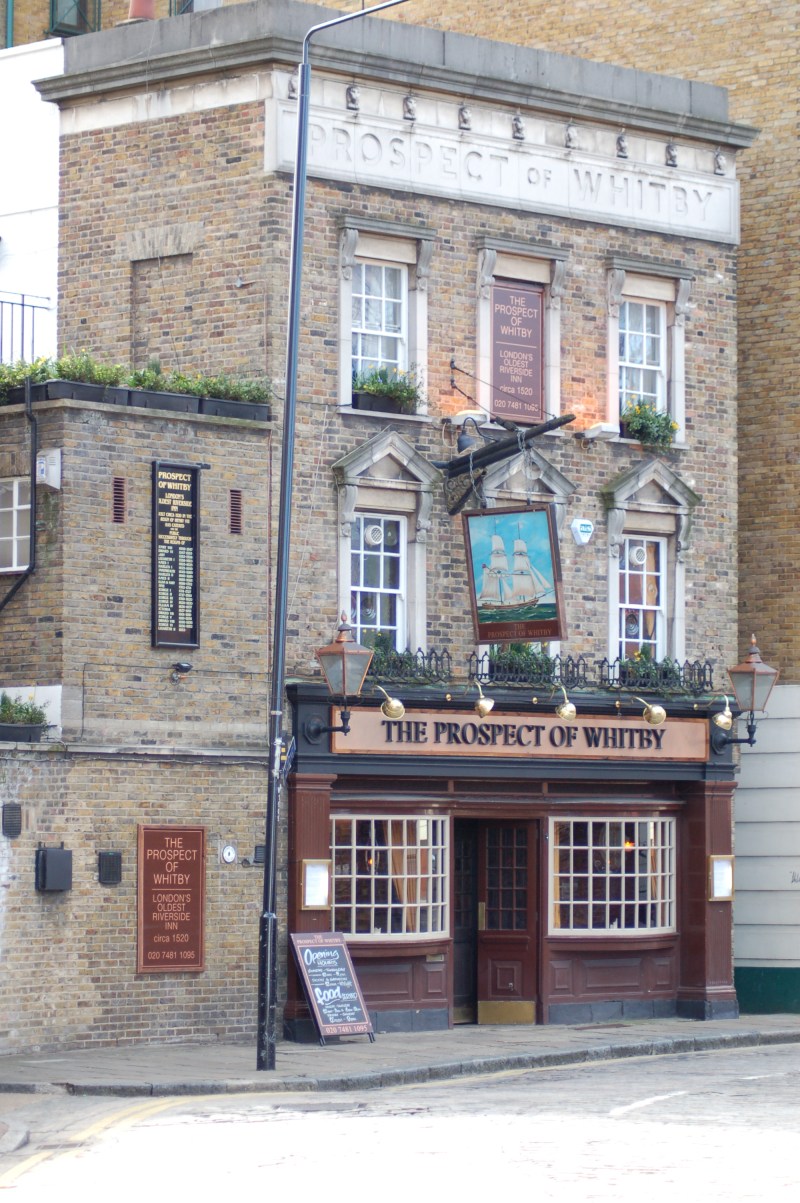 Sitting on the banks of the Thames, the Prospect of Whitby has a particularly interesting history in that it was once home to plenty ruffians and thugs.  It has since cleaned up its image and has a clean appearance to go with it.  The pub has one of the most impressive wooden bars in the city that vaguely resembles a ship’s hull and stretches the length of the ground floor.  The pub’s many areas give rooms that will suit any taste from the classy dining room to the secret garden. 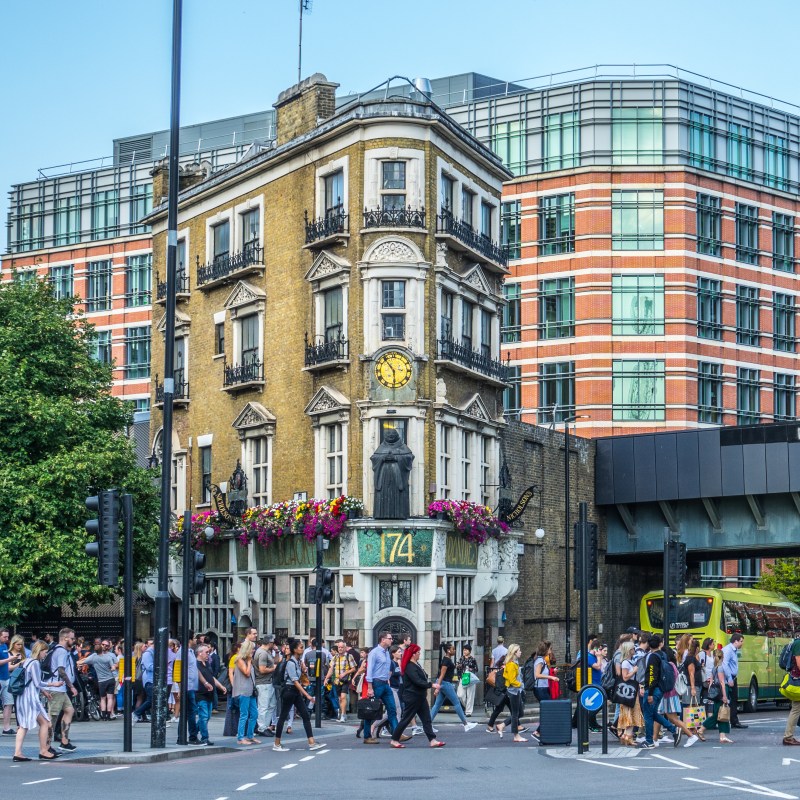 Certainly one of the most visually stunning interiors on this list, The Black Friar can be found appropriately enough in Blackfriars and is Grade II listed.  Since it was built on top of a former medieval Dominican friary, the interior (remodeled in 1905) abounds with religious imagery from depicting the friars who once lived on this site to archways that resemble those in a church.  It even features paintings that resemble illuminated manuscripts and a stained-glass window. 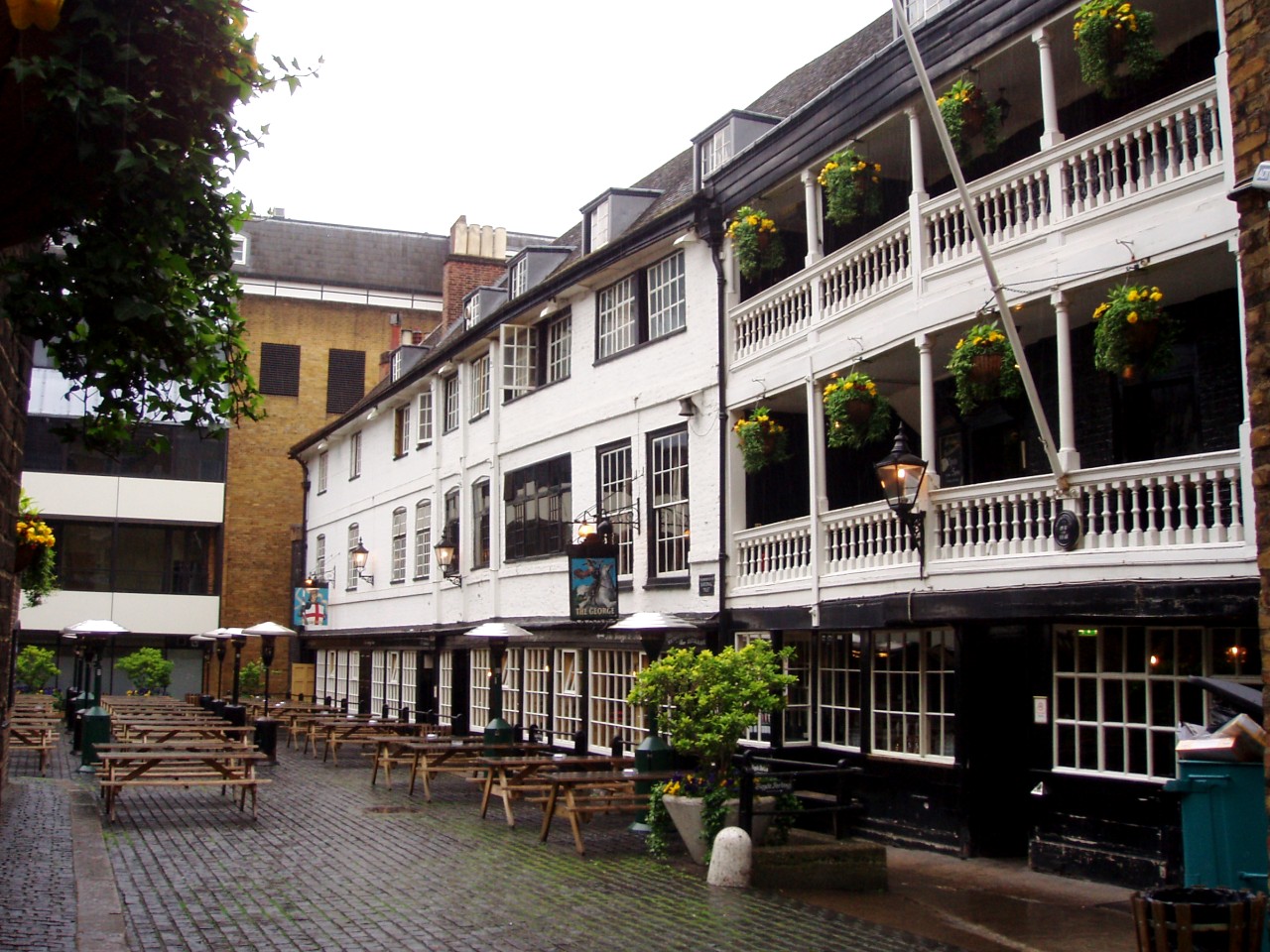 The George Inn is the only surviving galleried inn in London that dates back to at least the 16th Century when the first map of Southwark was drawn.  Owned by the National Trust, the galleries are not only a defining feature of the pub, but they’re absolutely gorgeous.  The interior is similarly attractive, but you may want to stay outside at one of the picnic tables and admire the building itself. 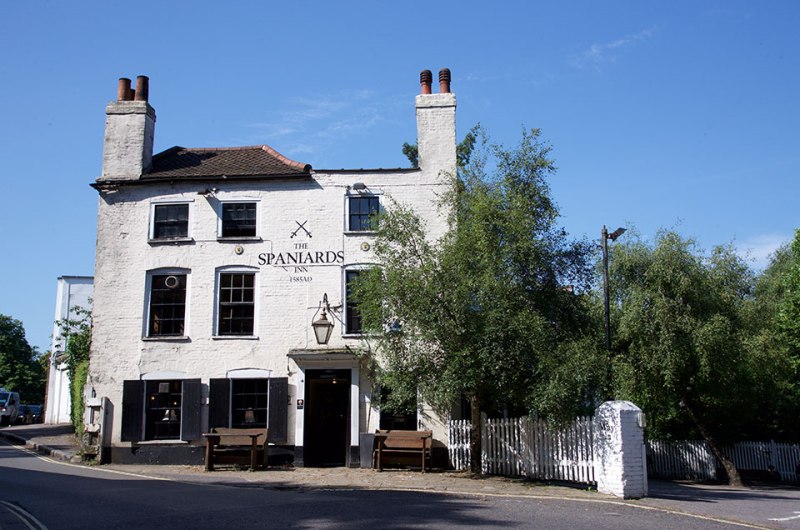 The Spaniards Inn may be one of the most literary pubs in London, getting references in both The Pickwick Papers and Dracula.  Outside, the white-painted brick contrasts beautifully with the black shutters, doors, and window trim.  Inside, you’ll find largely bare-bones wood walls and floors that one can imagine was the same as when Keats wrote Ode to a Nightingale in the gardens and Bram Stoker overheard a ghost story that he turned into his classic horror tales. 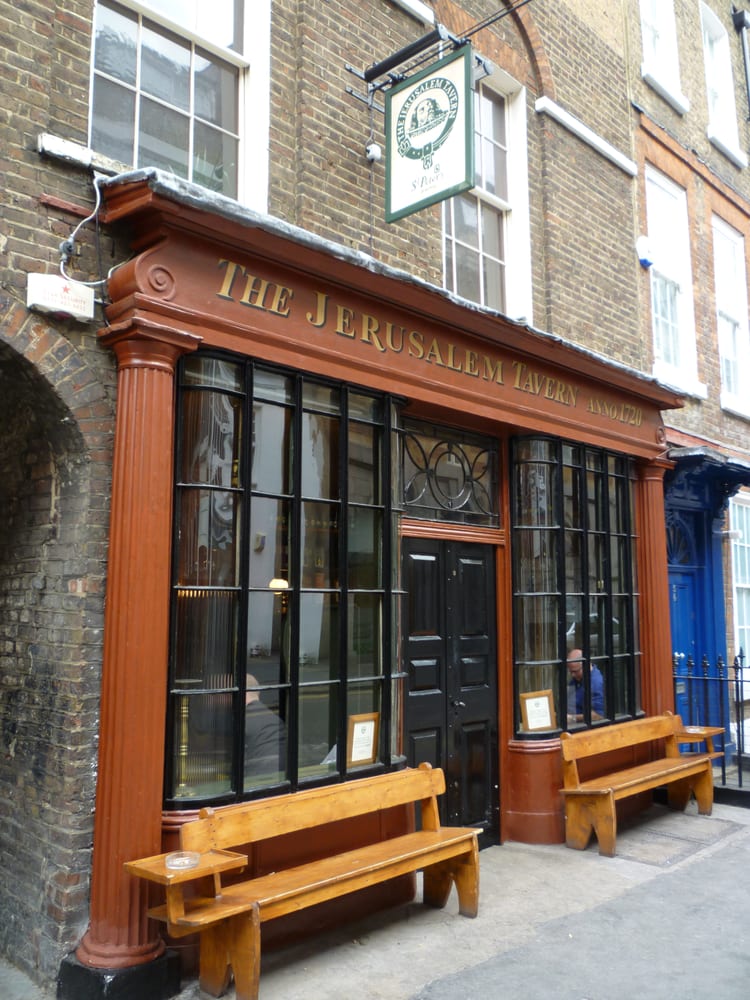 Inside and out, the Jerusalem Tavern has a simple, classic look to it, full of wood and painted green walls.  This mixes well with stone and old tile designs and belies the nature of the ales you’ll find inside.  In addition to the usual ales and lagers, Jerusalem also serves several different fruit ales from St. Peter’s Brewery. 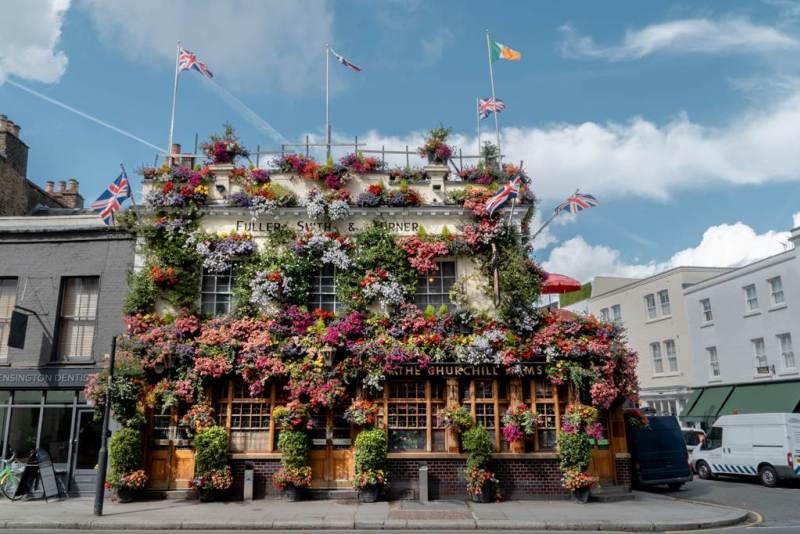 Last but certainly not least on this list is the Churchill Arms, which is unquestionably the best-looking pub in all of London.  The exterior is absolutely adorned with plants that change appropriately with the seasons and sometimes let you have a look at the wood, brick, and windows underneath.  Like Mr. Fogg’s, the interior is festooned with all manner of odds and ends that makes it an absolutely wonderful place for a pint.

Fancy a Pint? Ten of London’s Most Beautiful Pubs – Londontopia – The Website for People Who Love London 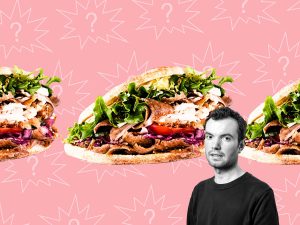 Meat, Reviewed: Will a lifelong veggie go wild for a doner kebab? 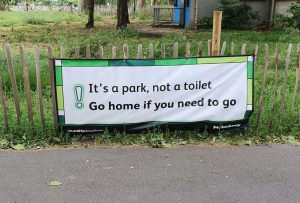 London Fields has been hit with a booze ban 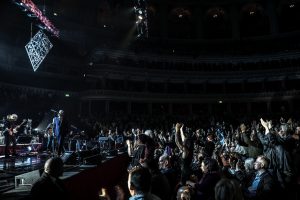 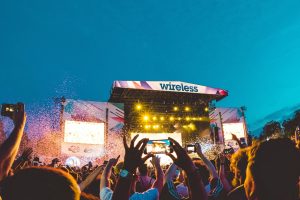