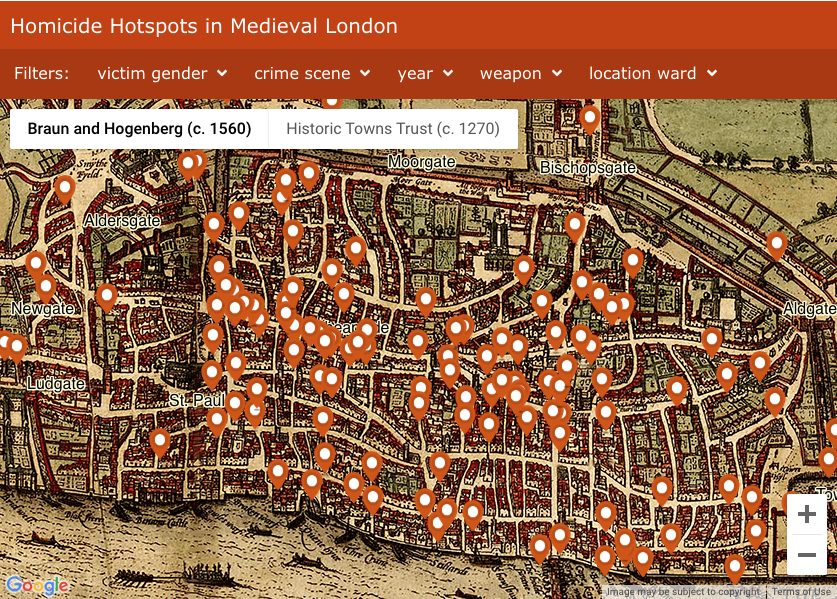 This is fascinating. The Violence Research Centre out of the University of Cambridge has taken the data of recorded murders in the Tudor era and plotted them on a map, which provides a macabre and fascinating look at crime in London in the middle ages.

First digital map of the murders recorded by the city’s Coroner in early 1300s shows Cheapside and Cornhill were homicide ‘hot spots’, and Sundays held the highest risk of violent death for medieval Londoners.

Stabbed by a lover with a fish-gutting knife. Beaten to death for littering with eel skins. Shot with an arrow during a student street brawl. Shanked by a sore loser after late-night backgammon.

These were just some of the ways to die violently in the city of London during the 14th century, as catalogued in the ‘Coroners’ Rolls’: the records of the medieval official tasked with documenting sudden and unnatural death – whether accident, suicide or homicide.

Now, University of Cambridge criminologist Professor Manuel Eisner has plotted all cases of murder from the surviving rolls – covering the years 1300 to 1340 – onto a digital map of the old city to show for the first time the ‘hot spots’ of lethal violence in medieval London.

Building on work conducted by the historian Barbara Hannawalt over forty years ago, Eisner has also produced an analysis of the 142 homicides committed within the city’s boundaries to reveal not just locations but the days, times and favoured methods.

The “murder map” of medieval London will be made publicly available on Wednesday on the website of the Violence Research Centre, which will also host a launch event today at the Institute of Criminology.

What an interesting insight into life in the middle ages in London.

You can check out the map for yourself here.

London History: The Medieval London Murder Map Released by University of Cambridge – Londontopia – The Website for People Who Love London