The best pizza in Rome: from focaccia to pinsa 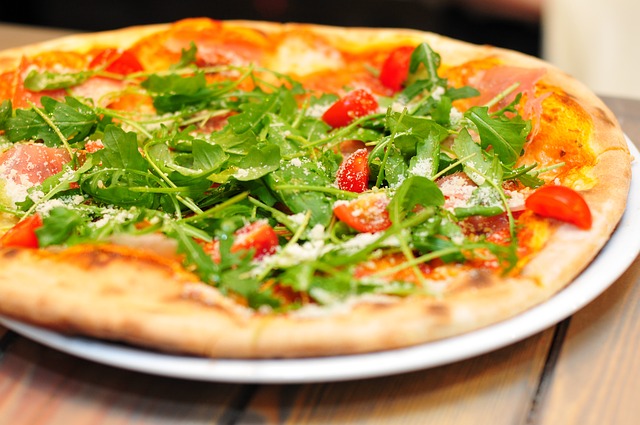 Pizza is probably one of the first things that comes to mind when choosing a restaurant in Rome, but because the city offers so much choice it can be a challenge to find the best pizzeria in town. Pizza napoletana, pizza romana, pinsa, focaccia… it can be hard to see the forest for the trees. Let us help you get started by giving you five of our favorite pizza spots where you can never go wrong!

If you’re strolling around Campo dei Fiori and are getting hungry, this is the perfect spot to get some pizza on the go: these babies are baked in 5 foot long slices and sold per piece. This bakery was opened in 1972, which makes it one of the oldest ones in Rome. The Rosciolis that are preparing the pizzas now are part of the third generation working in the family business and their bakery is among the most loved ones in Rome’s historical city center. They make all sorts of variants of pizza: rossa (Roman style: thin and crispy), bianca (a bit thicker, like a Roman version of flatbread) and focaccia (a type of bread similar to pizza which you can get plain or with all kinds of toppings). If you want to try the real classic, take a simple pizza bianca, topped with olive oil and salt. Ask for a pizza ‘da portare via’ (to take away) to have it wrapped in paper or eat it while it’s fresh at one of the standing tables outside.

sfidate il vento e questo maggio novembrino per raggiungerci! sul banco ci sono le nostre pizze preferite! – reaching us might be a challenge in this novembrish may! but here, on the counter, our fave pizzas are waiting for you!

A post shared by Antico Forno Roscioli (@anticofornoroscioli) on May 9, 2019 at 3:01am PDT

This classic pizzeria is without a doubt the most popular ones in the authentic working-class district of Testaccio and one of the best pizzerias in Rome: you’ll find a long line of people – mostly locals – waiting outside to be seated at almost any given night. They don’t take reservations, so be sure to come early (before 8, which is when Italian dinner time starts) or just think of the wait as part of the experience. Their pizza is of the classic Roman sort: flat and crispy, made in a wood-burning oven. The simpler, the better is an unwritten rule here that goes both for the unpretentious interior, the direct and casual but likable waiters and the food itself. Upon arrival, you’ll be given a piece of paper with the menu on it and asked to indicate your pizza of choice with a pen. The classics – Margherita (tomato, mozzarella, fresh basil, and oil), fiori di zucca (zucchini flowers, anchovies, and cheese) and Marinara (tomato, garlic, oregano, and oil) – are great choices. Want to start with an appetizer? Skip the fritti and go for a plate of beans (fagioli all’olio), a real Roman classic.

Real Roman pizza lovers might not approve of this restaurant, as it’s a Roman dependence of the most popular Neapolitan pizzeria in the whole city of Naples, and thus serves Neapolitan style pizza (with a high border and softer than its Roman counterpart). But there’s no doubt that Michele knows how to prepare a pizza: the now famous restaurant opened its doors in 1870 in the center of Naples and has attracted people from all over the world ever since – including Julia Roberts who ate a pizza here in the movie Eat Pray Love. A few years ago, Da Michele started opening franchises: in Rome, there’s one close to the Trevi fountain and one close to Piazza del Popolo. The famous Neapolitan restaurant only has two pizzas on the menu, Margherita and Marinara, proving that with good quality ingredients, you don’t need complexity. In the Roman franchise restaurants, three other classic Neapolitan classics were added to the menu: Napoletana (tomato, fior di latte (a semi-soft fresh cheese), anchovies, oregano and capers), ‘O Cazone (pork, provola cheese, ricotta cheese and parmigiano cheese in a folded pizza) and Pizza Fritta (the same as ‘O Cazone, but fried). If you want to try the ultimate classic, be sure to order a Margherita.

Prefer Roman-style pizzas? Be sure to visit La Pratolina: it doesn’t get much more Roman than this. In this restaurant in the 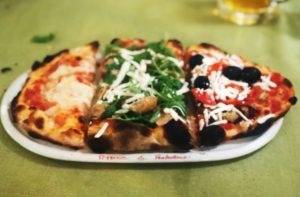 heart of Prati (close to the Vatican), they don’t serve pizza, but pinsa: a Roman-style, oval-shaped pizza with a thicker dough that is a bit more digestible than classic pizza due to its lightness. Its origin goes back all the way to the old Romans, making its recipe older than that of ‘normal’ pizza. Owners Marco and Fabrizio started out in 2001 and since then have become a popular spot in residential Prati, attracting mainly locals in their no-nonsense pizzeria. My favorite is the Burratissima, with fresh tomatoes, rocket, and burrata from Puglia. Feeling very hungry? Be sure to try their delicious homemade fritti as an appetizer: especially the ones with fiori di zucca, mozzarella and anchovies are delicious. As it often gets crowded, it’s recommendable to come early or reserve yourself a spot beforehand.

Although the best restaurants in Rome often have the most down-to-earth and simple interiors, the Eternal City also boasts some really cool, trendy pizza hotspots. If you’re looking for a more modern kind of pizzeria, Pizza Berberè is definitely a must-visit. It’s a restaurant chain that looks for cool, often industrial buildings all over Italy and transforms them into a pizza heaven. Berberè works with lievito madre, a type of sourdough that’s left to rest for at least 24 hours before baking it, making it much lighter on the stomach than classic pizza dough. You’ll find its Roman location close to Galleria Borghese and Museum MACRO (so an ideal place for lunch or dinner after a museum visit). Its interior is painted in bright colors and the restaurant boasts an open kitchen, so you can see the chef and his team at work. As an addition to the classic pizzas, they offer more original toppings like feta, ‘nduja (spicy sausage) and red onion.

The post The best pizza in Rome: from focaccia to pinsa appeared first on Eating Europe.