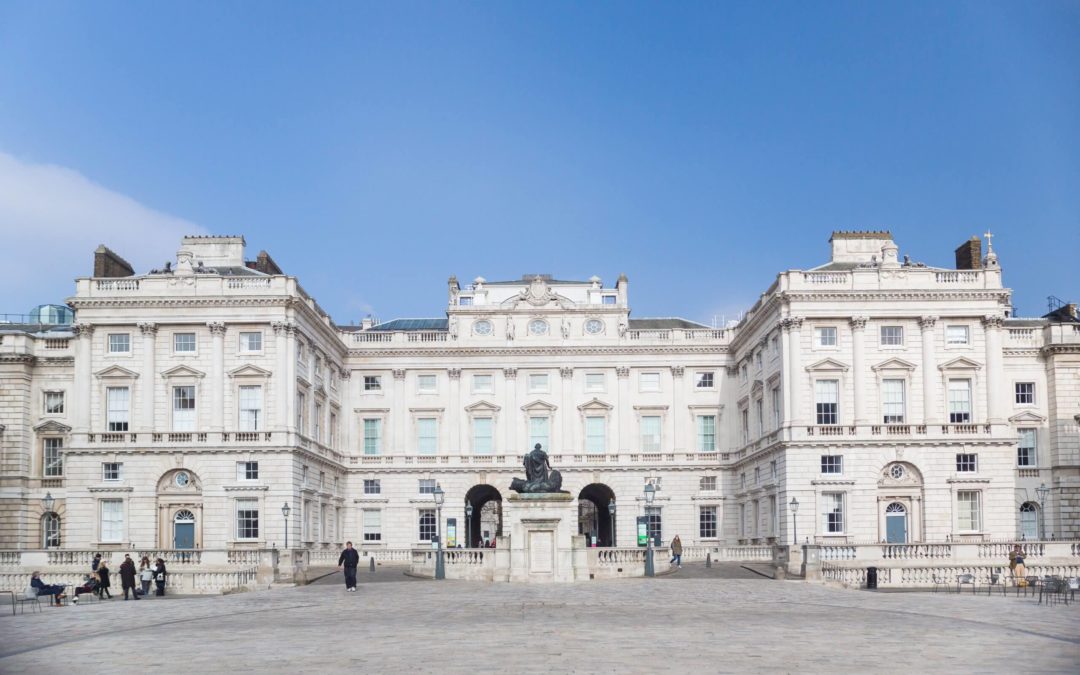 The Courtauld Gallery at Somerset House has been closed since 2018 for the largest transformation project of its history. It reopens on Friday, Nov 19, 2021, allowing us to enjoy not only the magnificent Impressionist and Post Impressionist collection but so much more with the extra gallery space.

The Courtauld is home to one of the greatest collections of art in the UK, with over 34,000 works stretching from the Medieval period through to the 20th century, spanning painting, works on paper and sculpture, and decorative arts. The Courtauld’s collection is most famous for its Impressionist and Post-Impressionist masterpieces – a world-leading collection that includes treasures such as Manet’s A Bar at the Folies-Bergère, Van Gogh’s Self-Portrait with Bandaged Ear, and the most significant collection of works by Cézanne in the UK.

The collection has grown and developed since the establishment of The Courtauld in 1932 through gifts and bequests from some of the leading private collectors of the 20th century, including Samuel Courtauld, Count Antoine Seilern, and Sir Robert Witt.

Everything has been deliberately and considerately redisplayed and reinterpreted, and it definitely feels more spacious. The elegantly refurbished galleries are able to shine, too, as each room’s description explains the artworks on display and the room itself.

During the 1920s, the English industrialist and philanthropist Samuel Courtauld (1876–1947) assembled one of the finest collections of Impressionist and Post-Impressionist art in the world, paintings that are central to the story of these groundbreaking artistic movements. Courtauld, however, was much more than a collector; he passionately believed in the power of art to improve society.

In 1932, less than a decade after he began collecting, he donated the majority of his collection to establish The Courtauld Institute of Art, created to promote art education and advance the understanding and enjoyment of the visual arts in the UK. It was the first institute of higher education to teach art history and conservation in the UK.

Alongside the formation of his collection, Courtauld donated £50,000 to the nation for the acquisition of Impressionist painting. His efforts and vision secured such iconic paintings as Van Gogh’s Sunflower and Seurat’s Bathers at Asnières – some of the most popular paintings in the National Gallery today. (There was an excellent exhibition about this at the National Gallery in 2018.)

Behind the grand Neoclassical façade, the building is an idiosyncratic assemblage of disconnected ‘houses/suites of rooms’ originally constructed to provide homes to a varied set of government offices and learned societies.

‘Courtauld Connects’ is the most significant development in the history of The Courtauld since it moved to the North Wing of Somerset House in 1989.

Designed by Stirling Prize-winning architects Witherford Watson Mann, the redevelopment revitalizes and opens up the magnificent buildings conceived by Sir William Chambers in the 1770s, celebrating their heritage.

Accessibility to the building has been dramatically improved, including step-free entrance access, widened doors, and new display cabinets.

There are three floors of galleries to explore. I chose to start at the top as that’s how the visitor route was planned before the closure. Old habits, eh?

This floor has Impressionism, 20th-century Art, and a special exhibition space.

The Myth of Prometheus

The largest work in The Courtauld’s collection is back on display for the first time in over a decade. Austrian Expressionist Oskar Kokoschka’s epic modern triptych The Myth of Prometheus, consists of three canvases measuring over eight meters long. It was commissioned by Count Antoine Seilern, one of The Courtauld’s most important benefactors, for a reception room ceiling in his London home. Seilern bequeathed the triptych to The Courtauld, together with his remarkable collection of Old Master paintings and drawings. Kokoschka painted the work in London in 1950, at a time when the world was poised between the Second World War and the beginning of the Cold War, retelling stories from classical myth and the Bible to evoke dramatic scenes of apocalypse and the hope of regeneration during troubled times.

The painting is exhibited alongside a selection of photographs documenting Kokoschka working on The Myth of Prometheus in Seilern’s home, taken by the acclaimed 20th-century American photographer Lee Miller (1907–1977). Look along the line of photographs, and you can see the alterations happening in the painting as he changed his mind and redid areas. 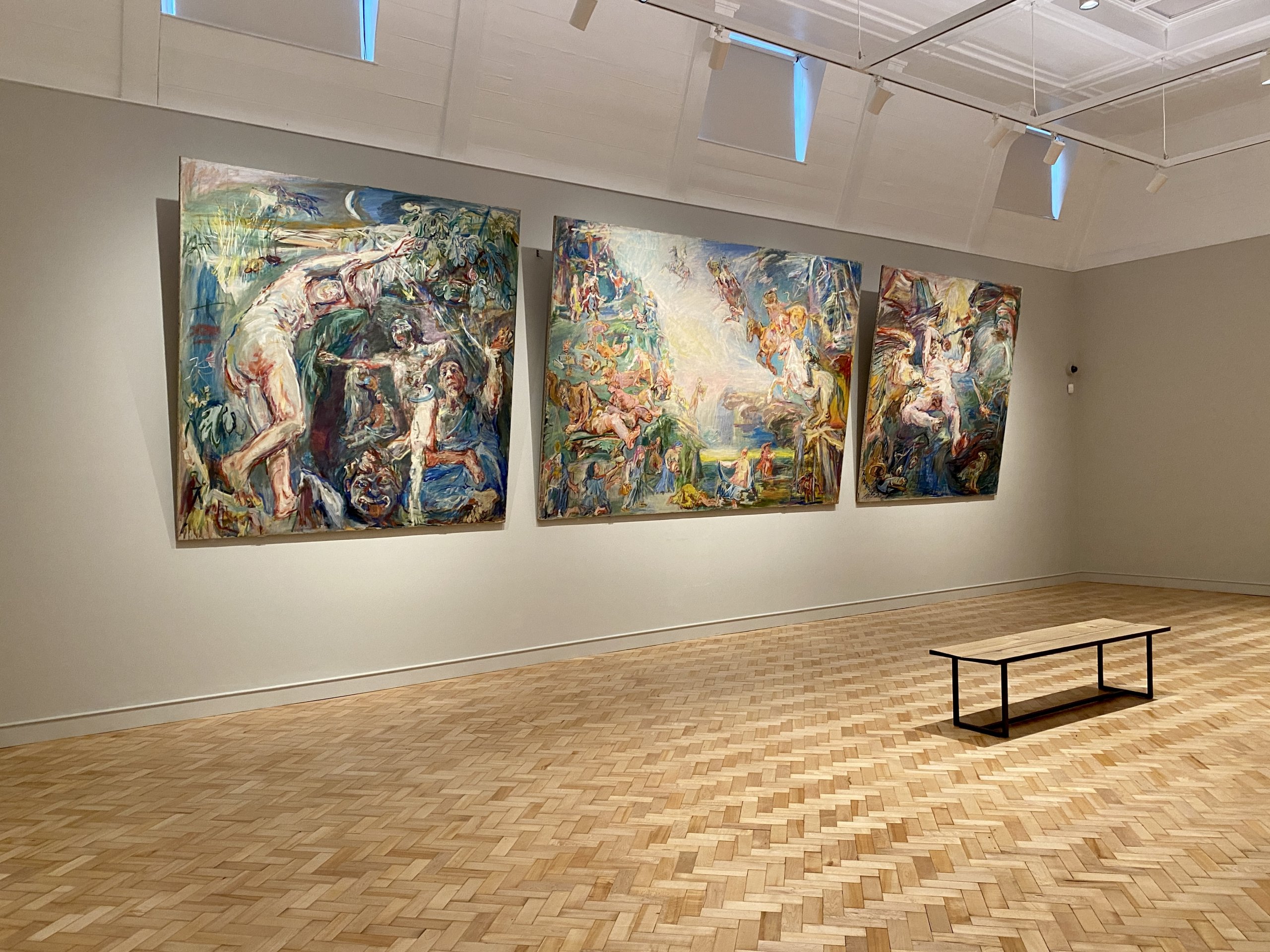 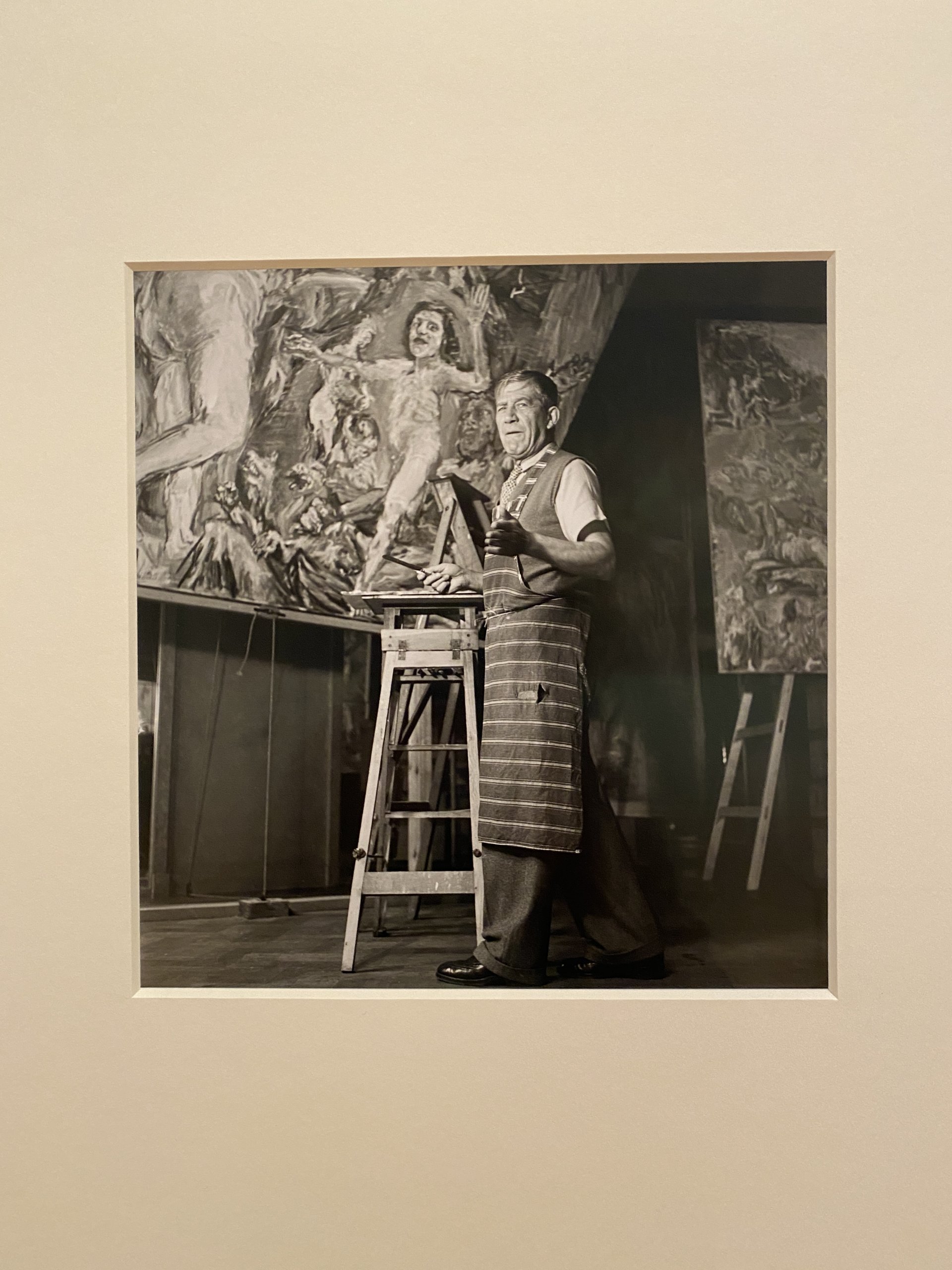 Next, you reach Room 10 – Impressionism and Post-Impressionism, 1880–1900. This space is the ‘Great Room’ where the Royal Academy’s annual Summer Exhibition was held from 1780 until the RA outgrew the space and moved to the East Wing of the recently completed National Gallery in 1837. This was the first purpose-built exhibition space in the UK and the first top-lit public gallery in Europe.

Previously subdivided, the newly renamed LVMH Great Room has been reinstated to its original proportions and volume. 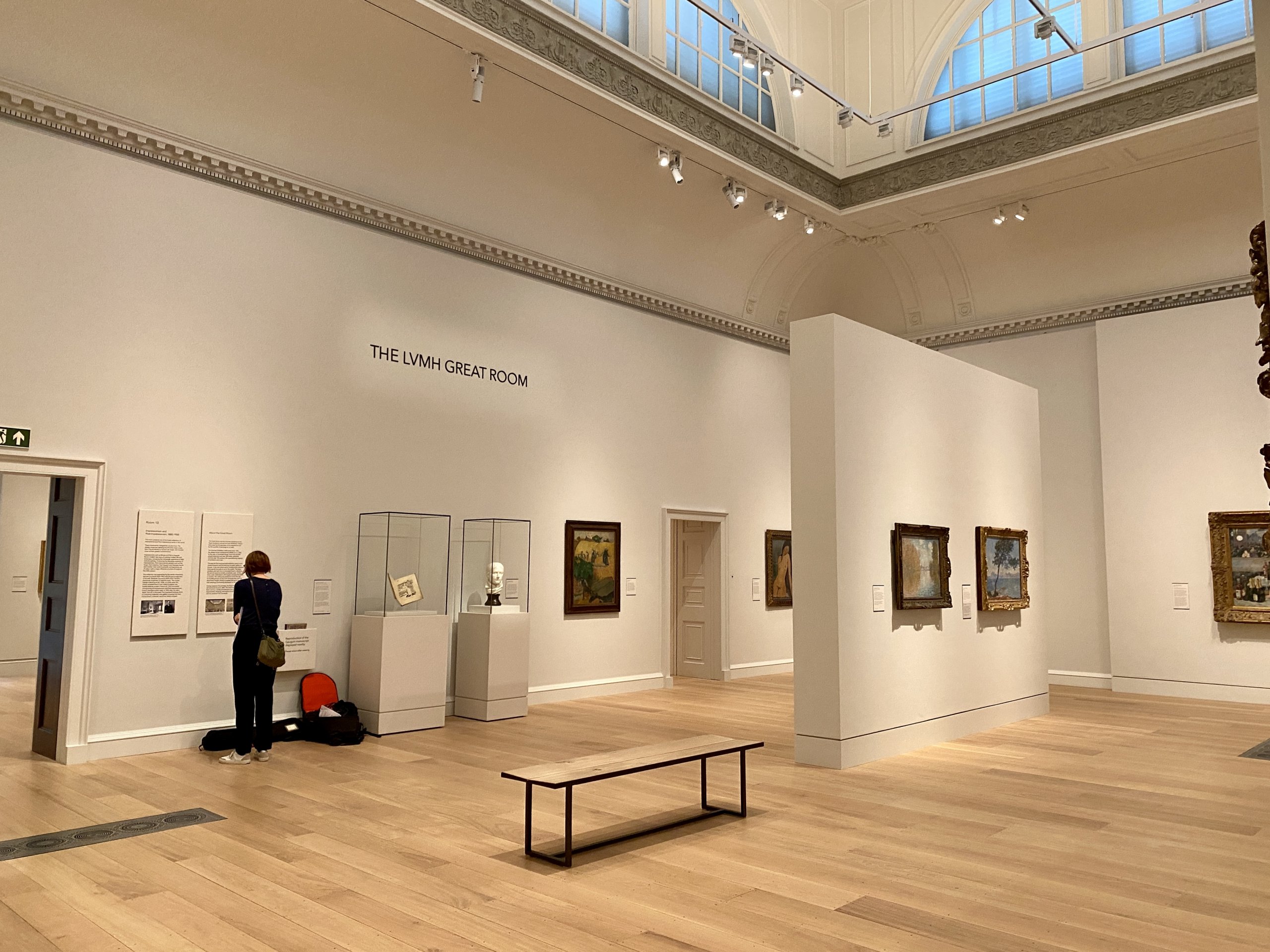 This striking nude is one of several painted by Amedeo Modigliani between 1916 and 1917. The depiction of pubic hair was shocking at the time. Police even closed a 1917 exhibition of Modigliani’s nudes at a commercial gallery in Paris on the grounds of indecency.

This famous self-portrait by Vincent van Gogh was painted in January 1889, a week after leaving hospital. He had received treatment after cutting off most of his left ear (shown here as the bandaged right ear because he painted himself in a mirror). This self-mutilation was a desperate act committed a few weeks earlier, following a heated argument with his fellow painter Paul Gauguin.

The Courtauld Gallery has the most significant collection of works by Cézanne in the UK, including The Card Players (below).

It was a delight to see these small-scale images by Georges Seurat (1859–1891) when you are used to seeing the huge Bathers at Asnières at the National Gallery. Horses in the Water (below) was a study for Bathers showing an earlier composition that he ultimately abandoned. 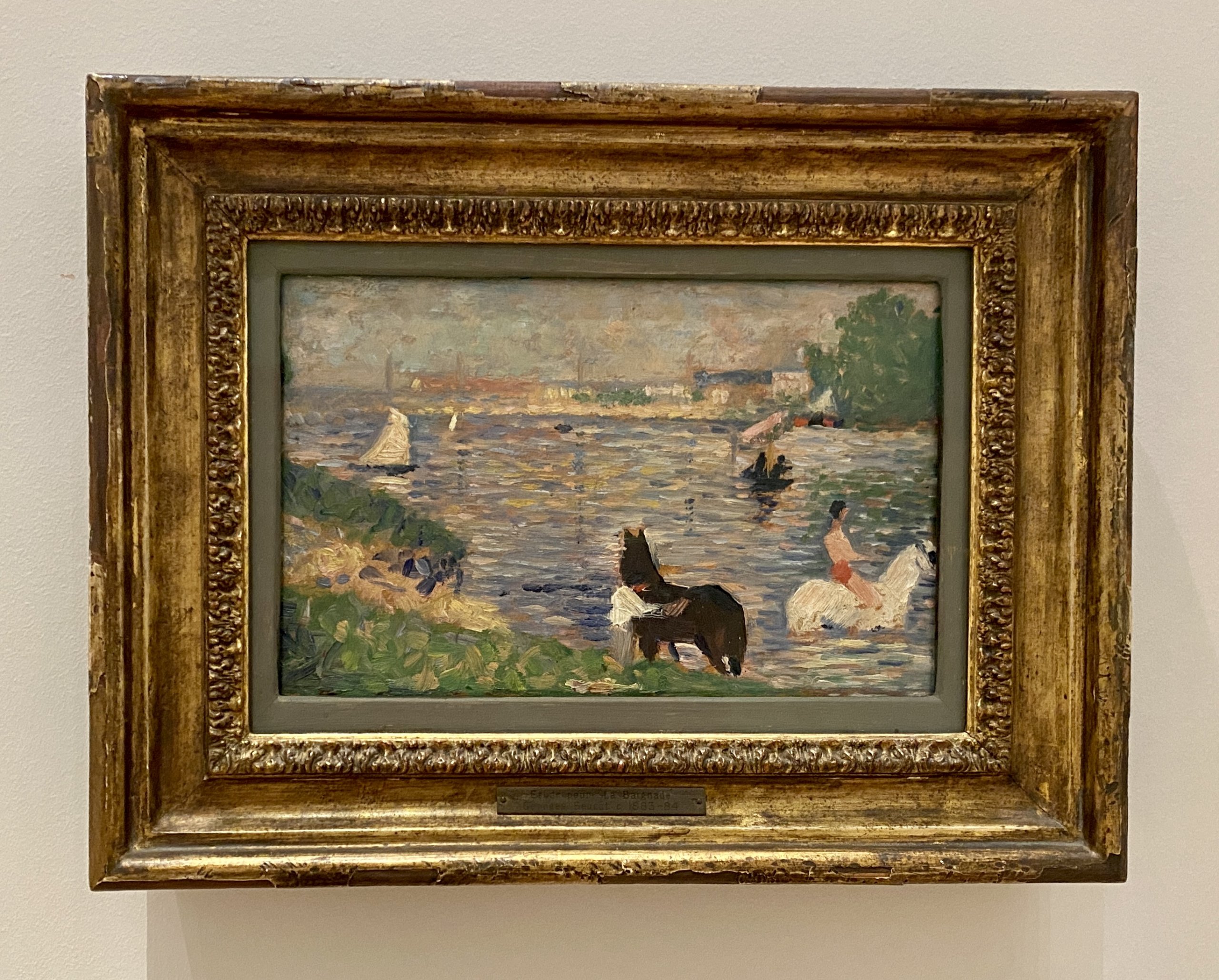 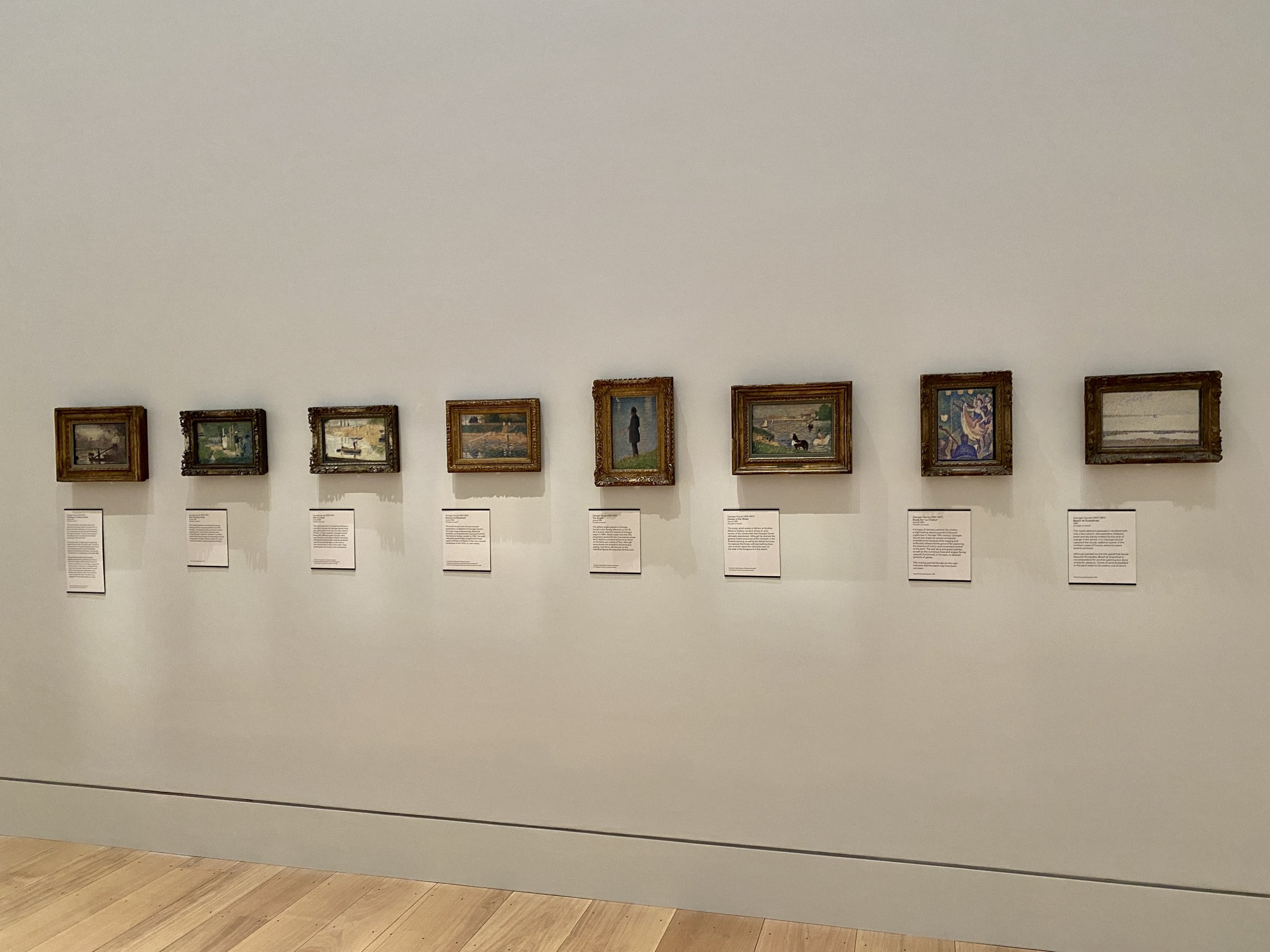 The collection was assembled by the late collector Howard Karshan and generously gifted to The Courtauld by his wife, Linda. Aside from Cézanne, none of the artists included in the gift has previously been represented in the collection. 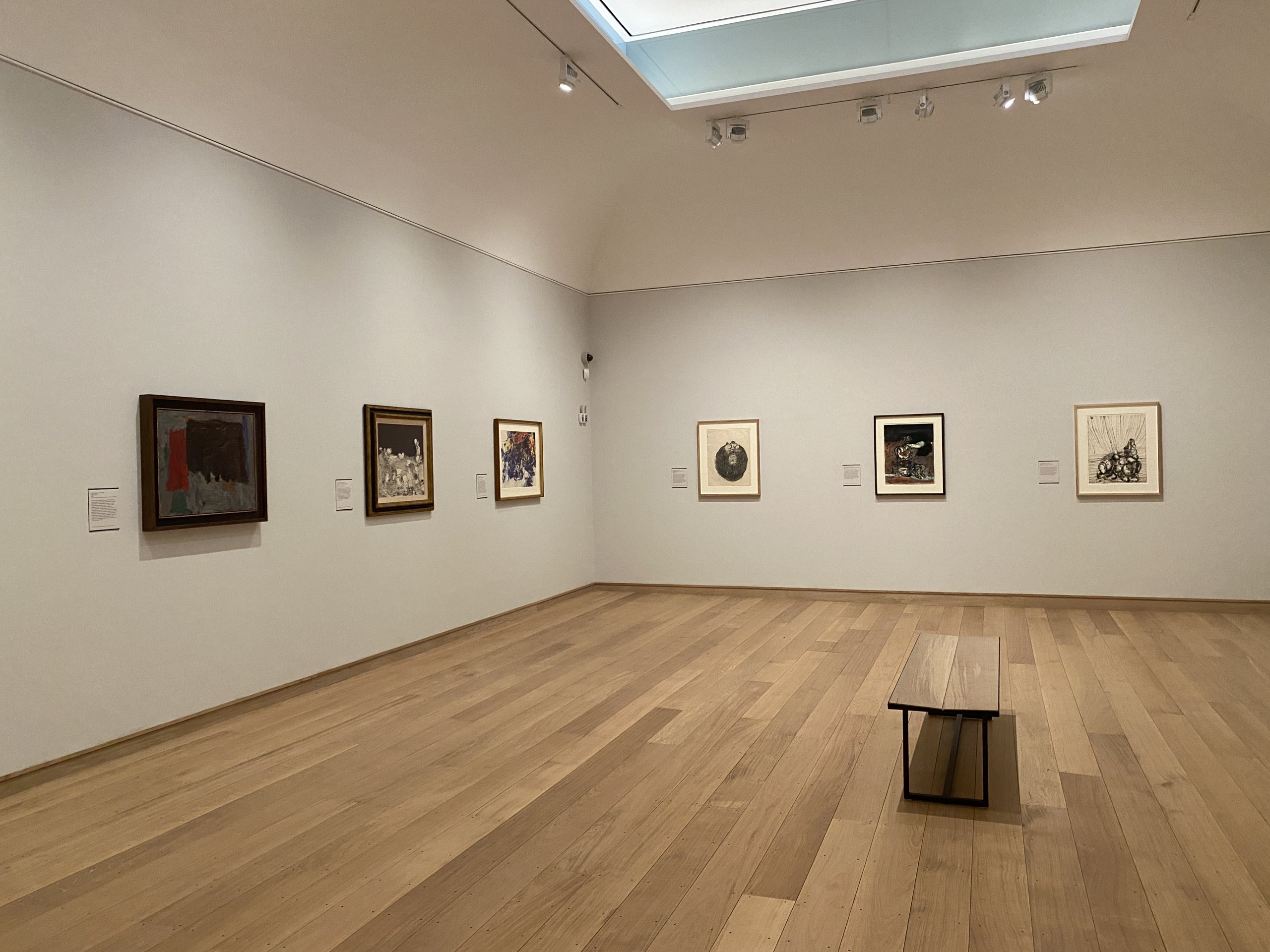 This smaller gallery, connected to the Great Room, includes this 1874 masterpiece by Renoir. While it depicts a fashionable couple at the theatre, the scene was staged in his studio using his brother Edmond and the professional model Nina Lopez.

Before heading down the sweeping staircase, do visit the gallery near the lift. For the first time, The Courtauld’s significant collection of works by the Bloomsbury Group has been given a dedicated space in the Gallery.

From about 1910, this close-knit circle began challenging the conservative values of the British establishment, embracing the freedom of artistic expression and upturning social and sexual norms. They became known as the Bloomsbury Group, after the area in London where they lived and worked. Their most famous member was the writer Virginia Woolf. Among the prominent artists of the group were her sister Vanessa Bell, Duncan Grant, and Roger Fry. Best known as an influential art critic, Fry introduced French Impressionist and Post-Impressionist art to a London audience with two important exhibitions in 1910 and 1912.

Most of the works on display belonged to Fry. After his death in 1934, his sister Margery Fry, a noted prison reformer, arranged for much of his collection to be given to The Courtauld. 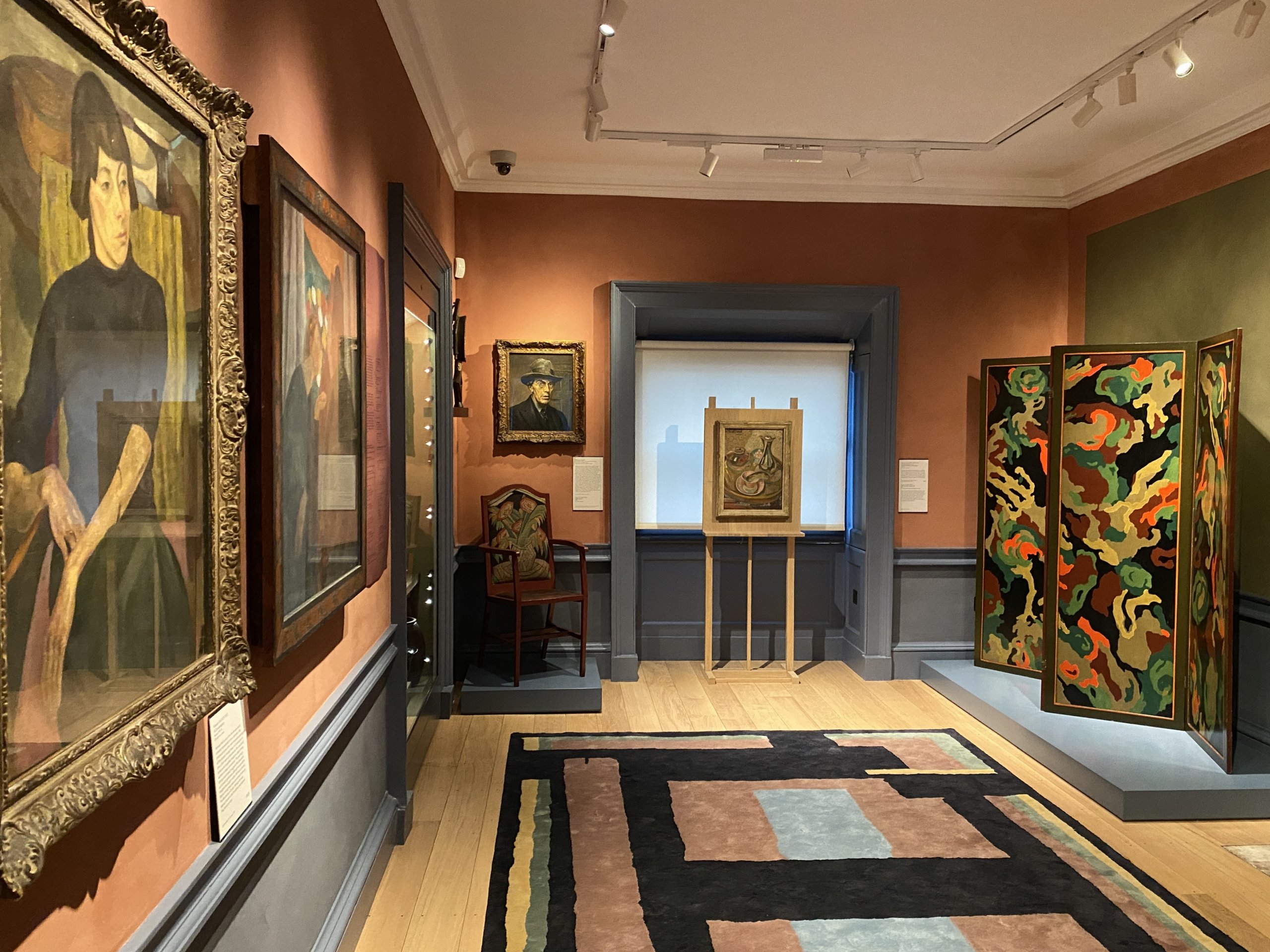 Don’t miss the major new painting by Cecily Brown for The Courtauld’s historic staircase. The large-scale artwork was specially commissioned for the curved wall. 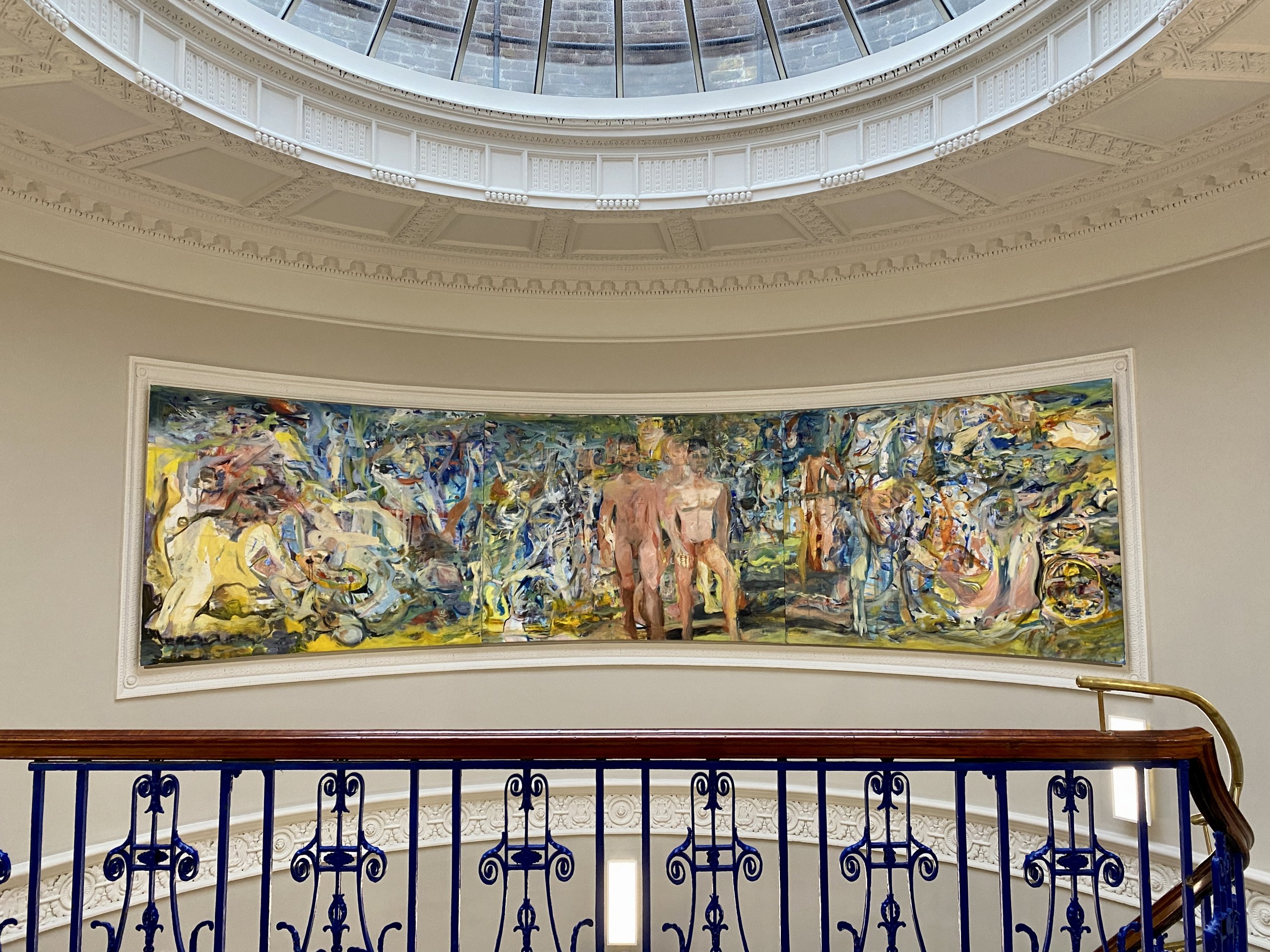 The impressive staircase was conceived as a symbolic ‘journey to enlightenment.’ The idea was that as you rose to the top of the building, you moved from the dark to the light with the wonderous skylights (ceiling windows). 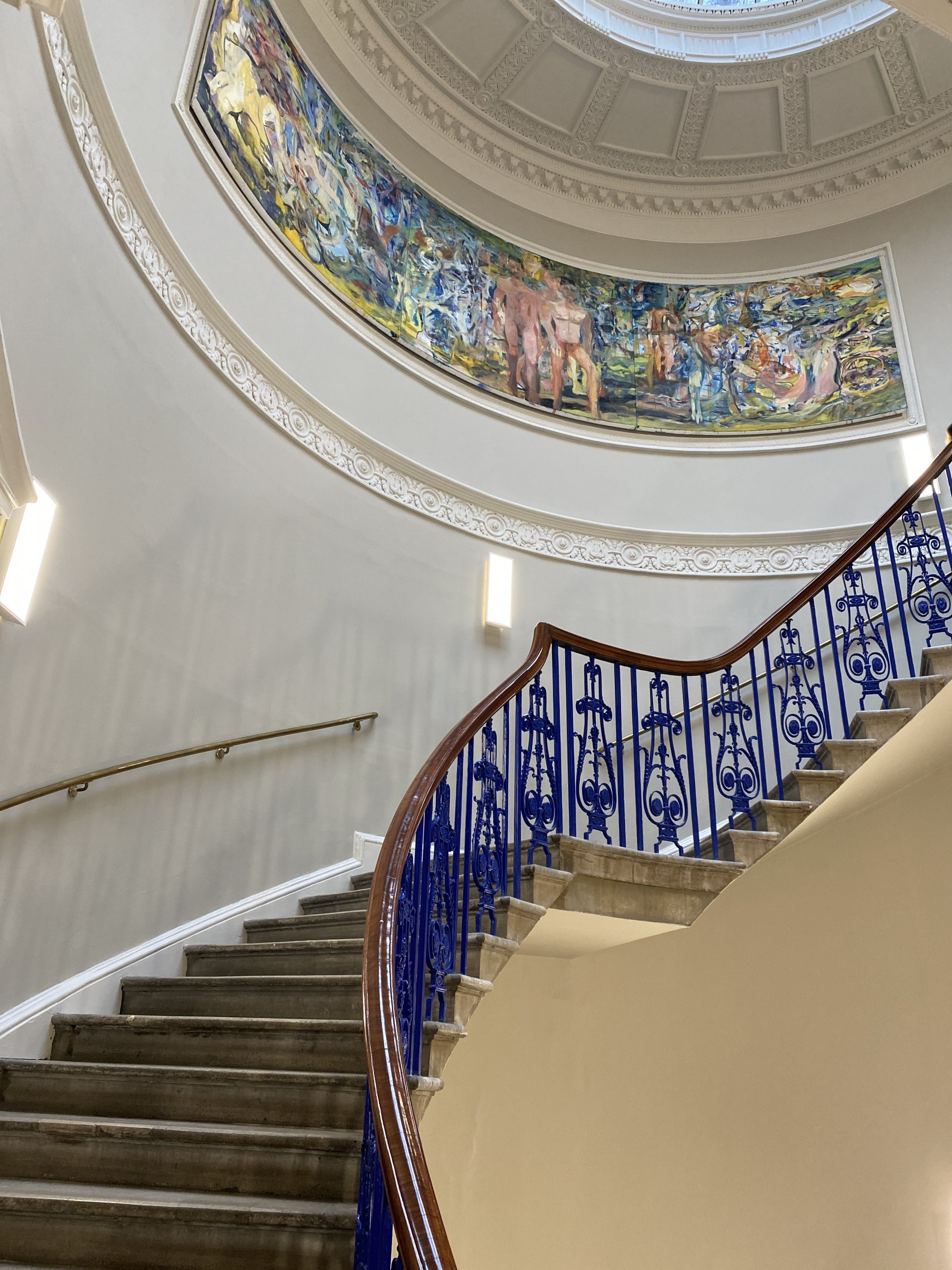 Taking that journey in reverse, I walked down to the second floor to see European Art 1400–1800.

Thanks to the generous donation of  from

Philanthropists Sir Leonard and Lady Blavatnik, and the Blavatnik Family Foundation, donated £10 million to restore a suite of six galleries spanning the entire second floor of the building. The elegantly restored Blavatnik Fine Rooms showcase some of the greatest and most-loved works from The Courtauld’s collection from the Renaissance through to the 18th century. The redevelopment enables The Courtauld to give a more generous account of this part of its collection across rooms dedicated to the Italian Renaissance, Northern Renaissance, 17th and 18th century Europe.

All of the artwork labels have been rewritten with the rehang to contextualize and explain. I was looking out for references to slavery as this was conveniently ignored in most galleries before the Black Lives Matter movement progressed in 2020. It didn’t take me long to find a more honest caption. 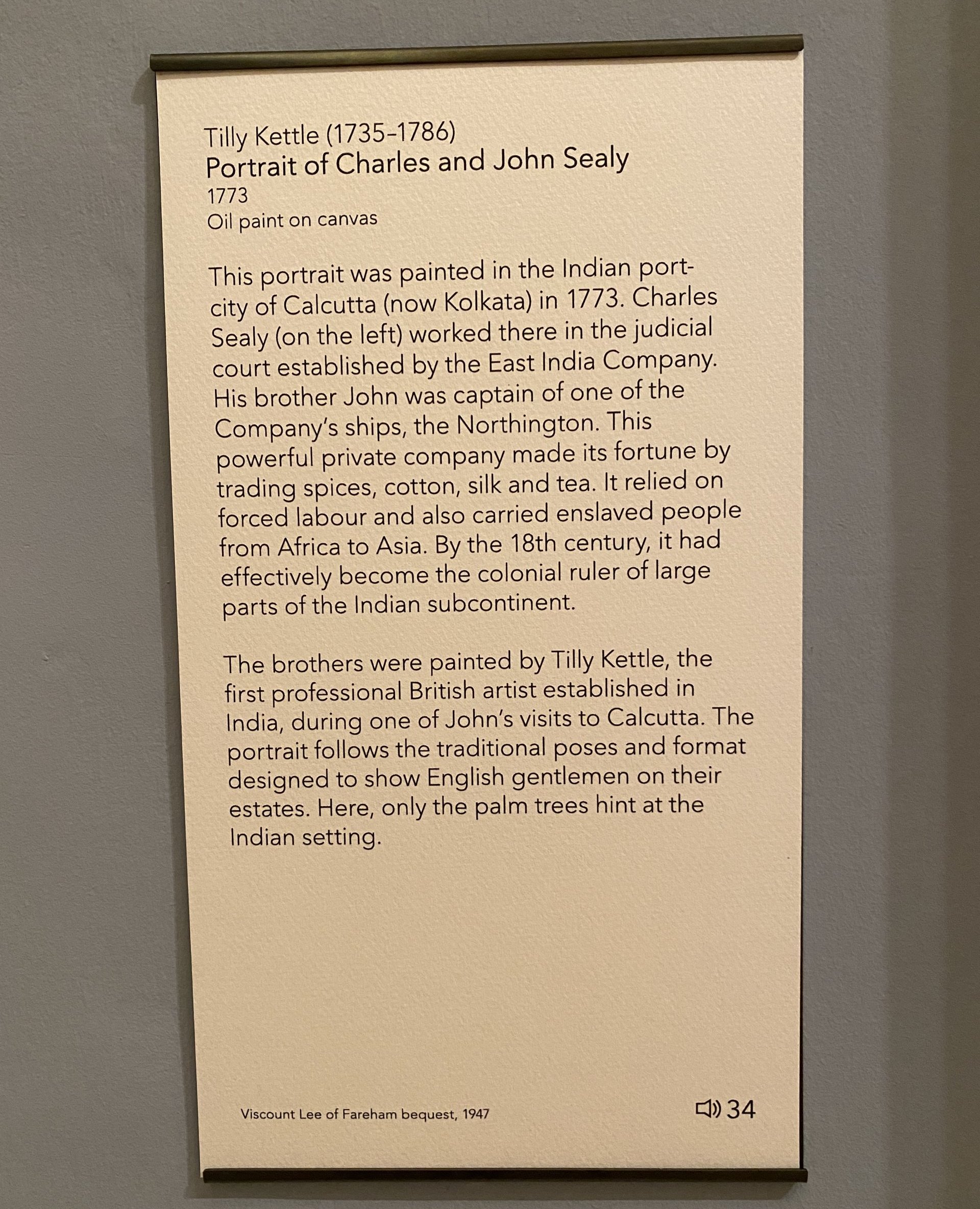 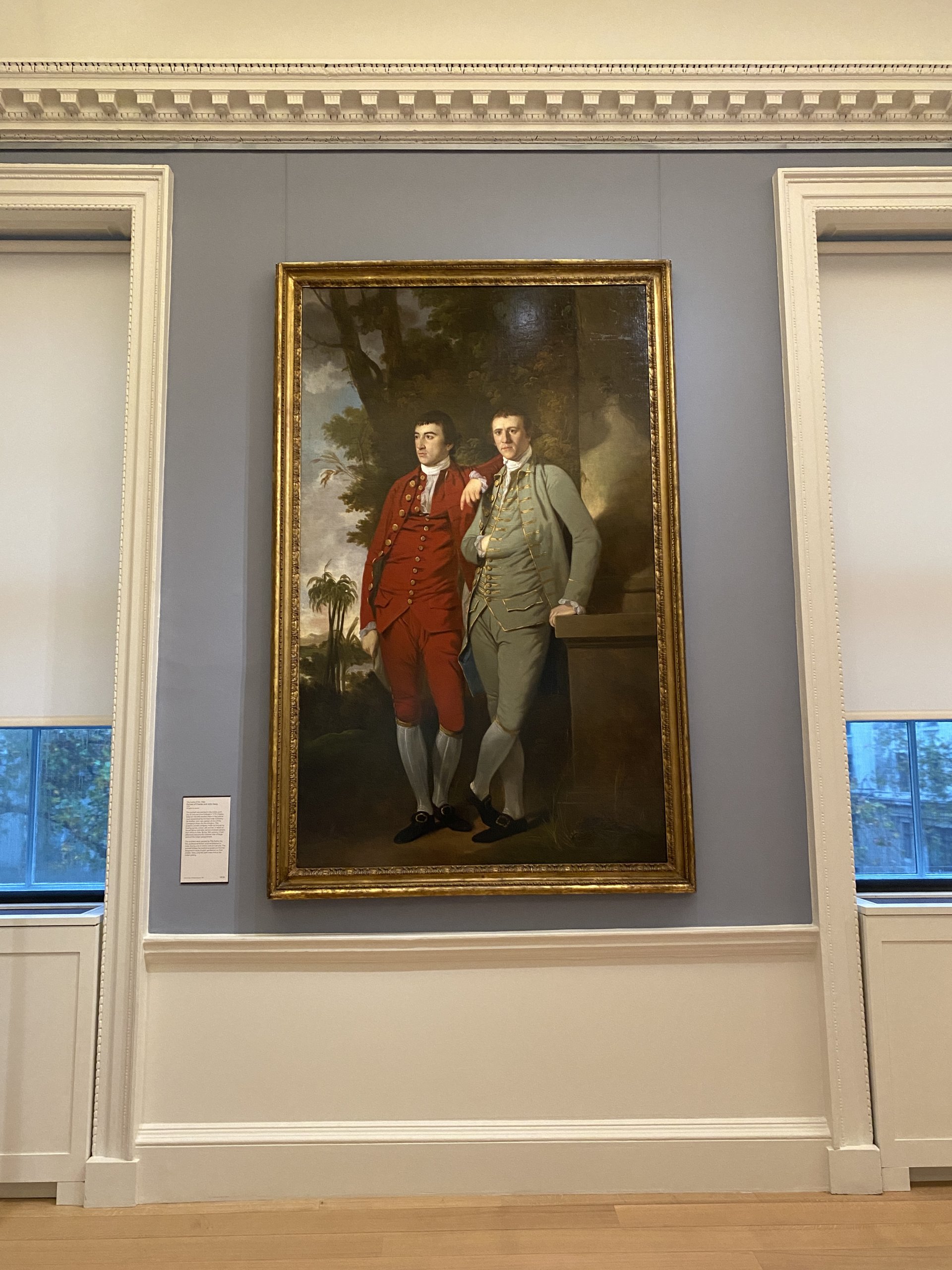 Before we even consider the artworks, look up at the ornate ceiling. This was a Council Room that belonged to the Royal Academy. 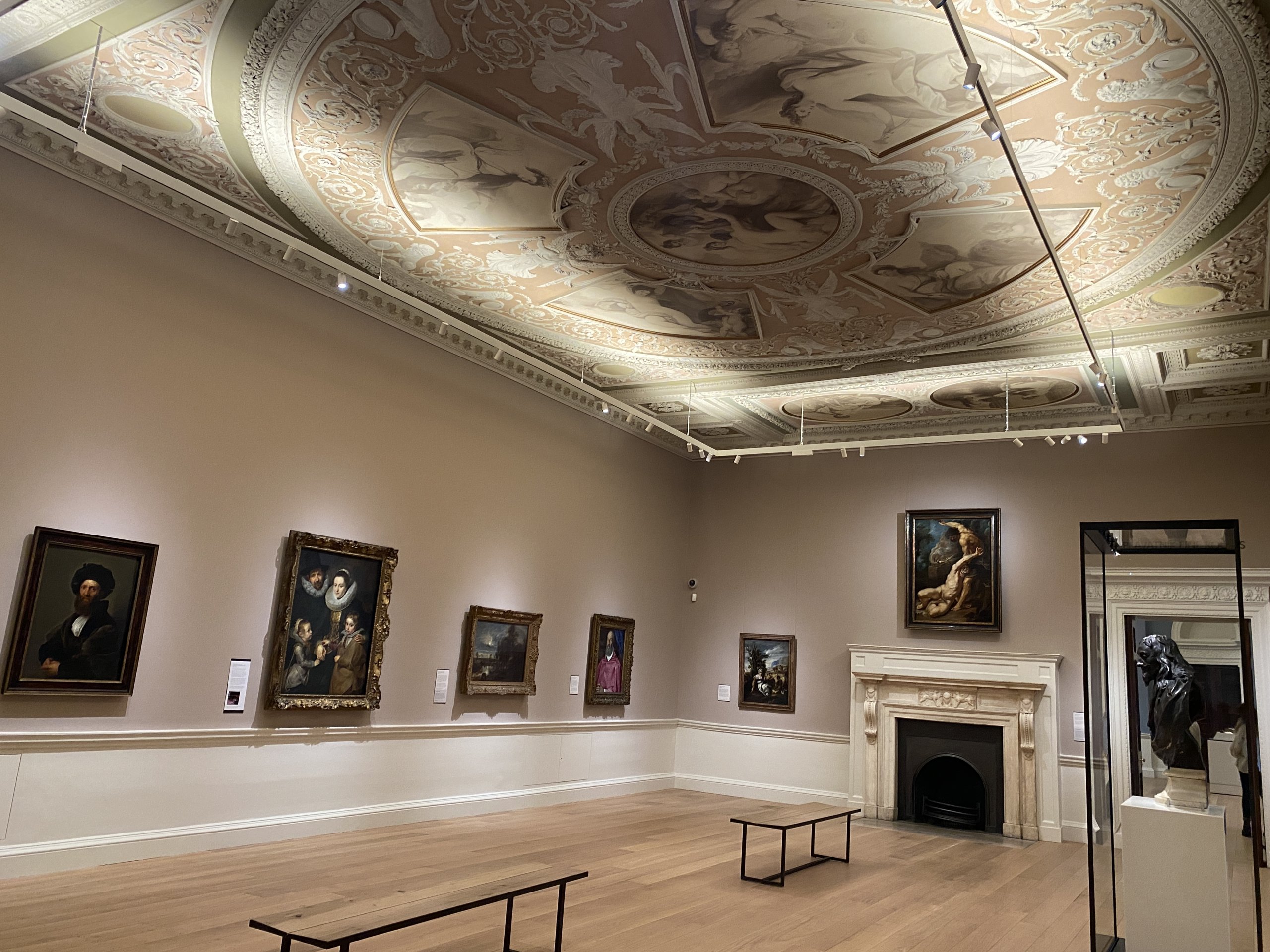 Peter Paul Rubens was the most international artist of his day, working all over Europe.

There is also a terracotta bust (painted to simulate bronze) of King Charles I from the workshop of Louis-François Roubiliac. 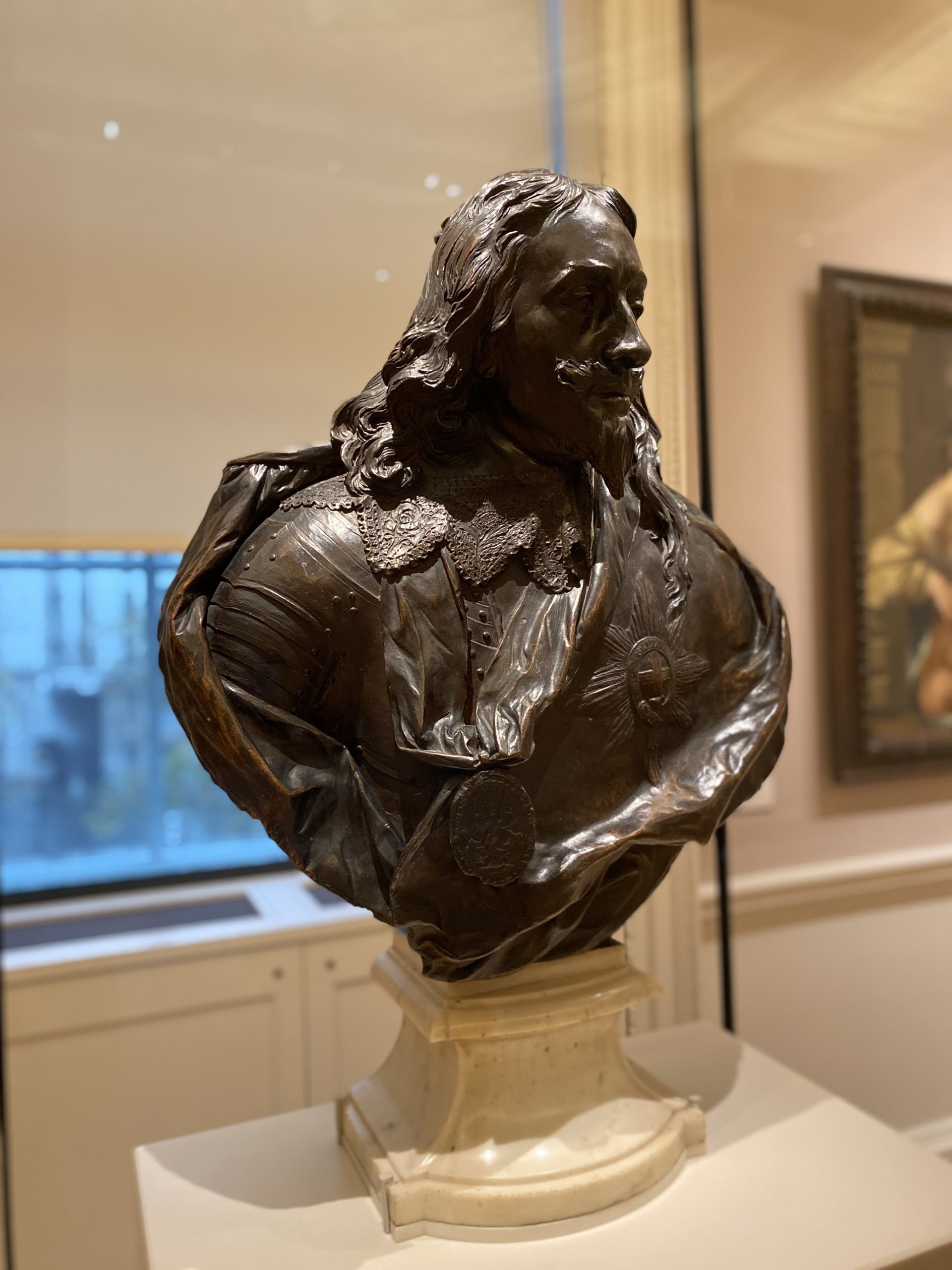 Another ‘admire the building’ moment, this room was the Council Room for the Society of Antiquaries. 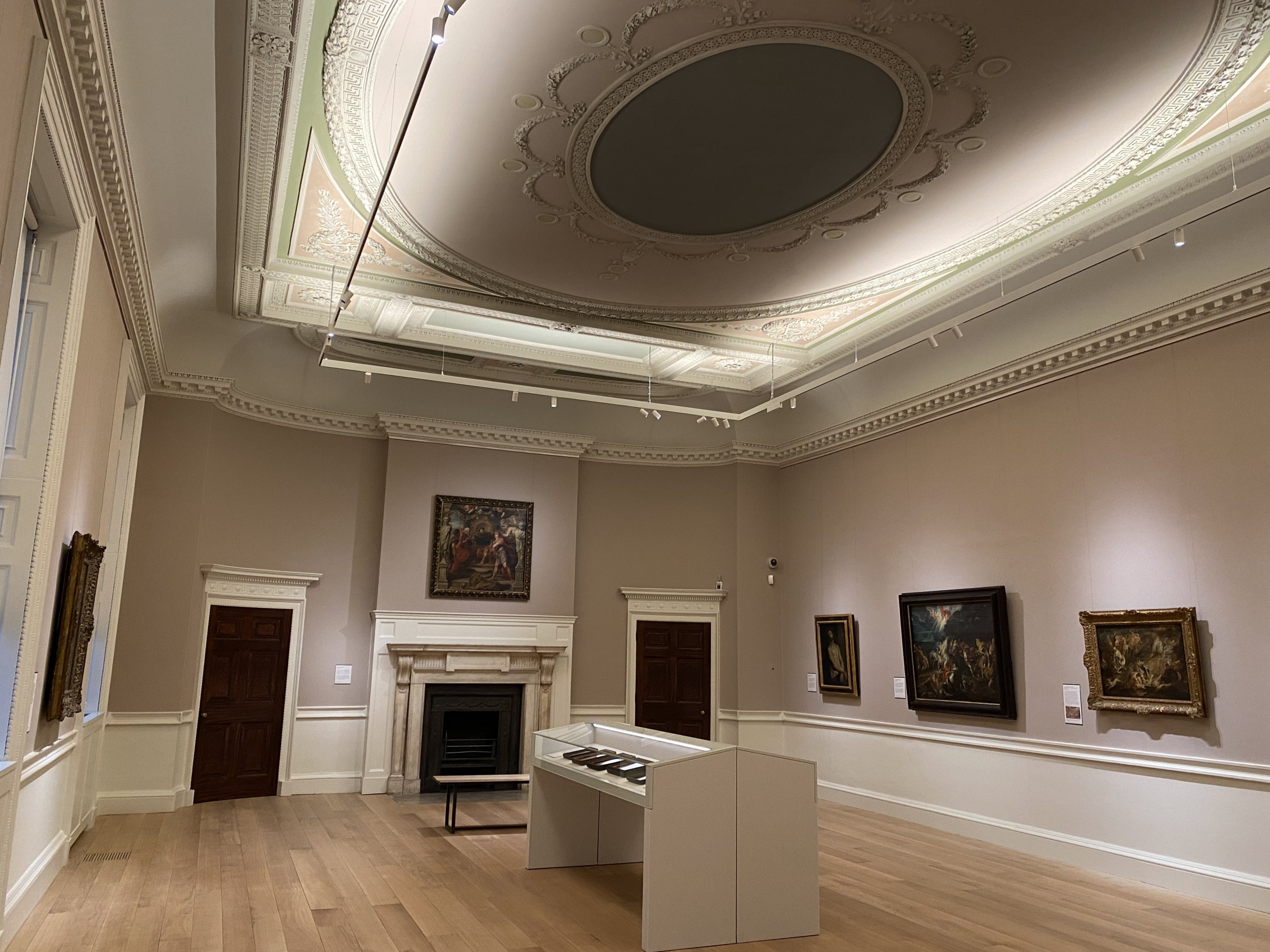 This ante-room (lobby) was used by members of both the Royal Society and the Society of Antiquaries.

This room was used for the public lectures of the Royal Society, the UK’s leading scientific academy. 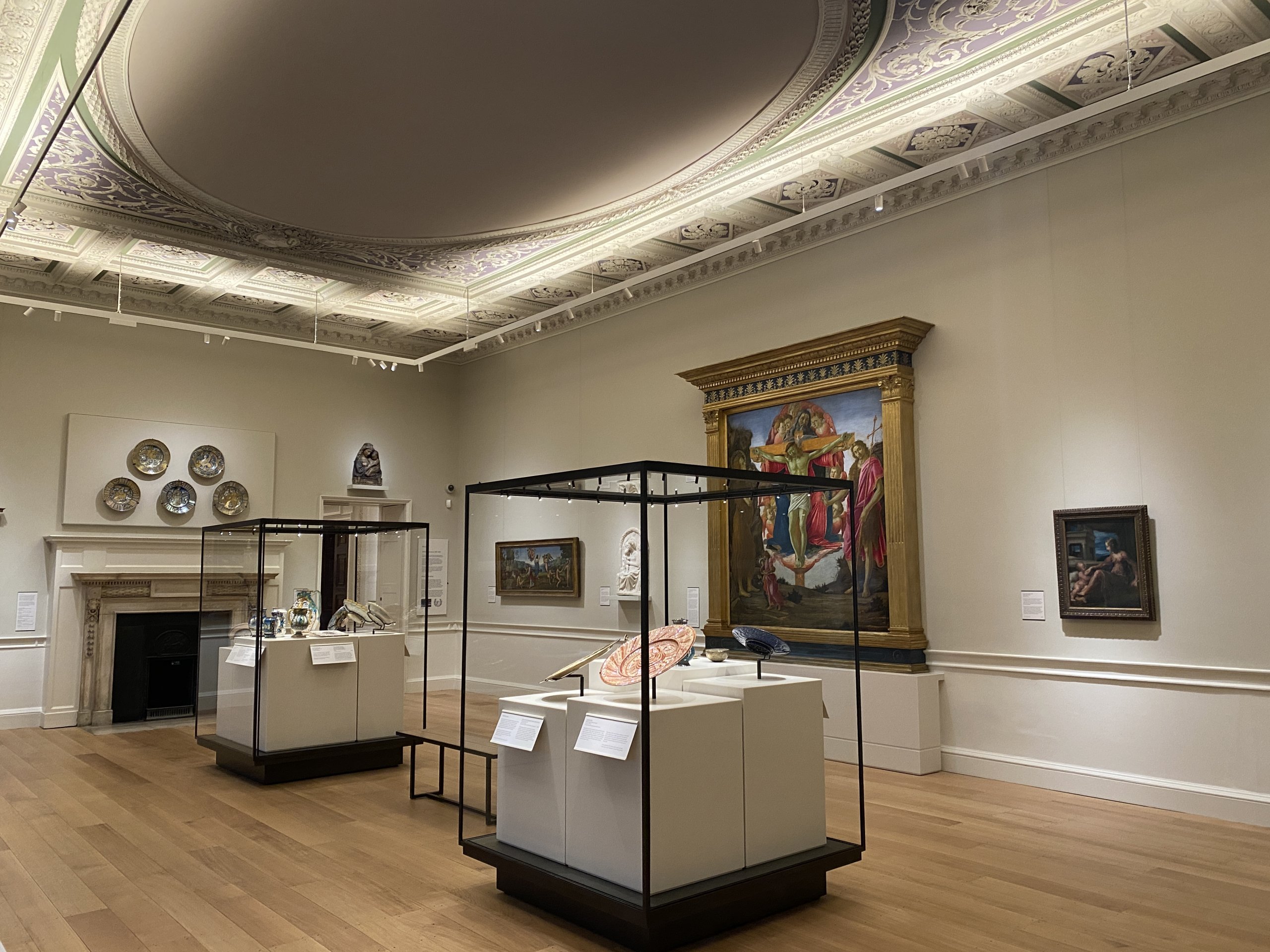 This room was the library and ante-room (lobby) of the Royal Academy, Royal Society, and Society of Antiquaries. 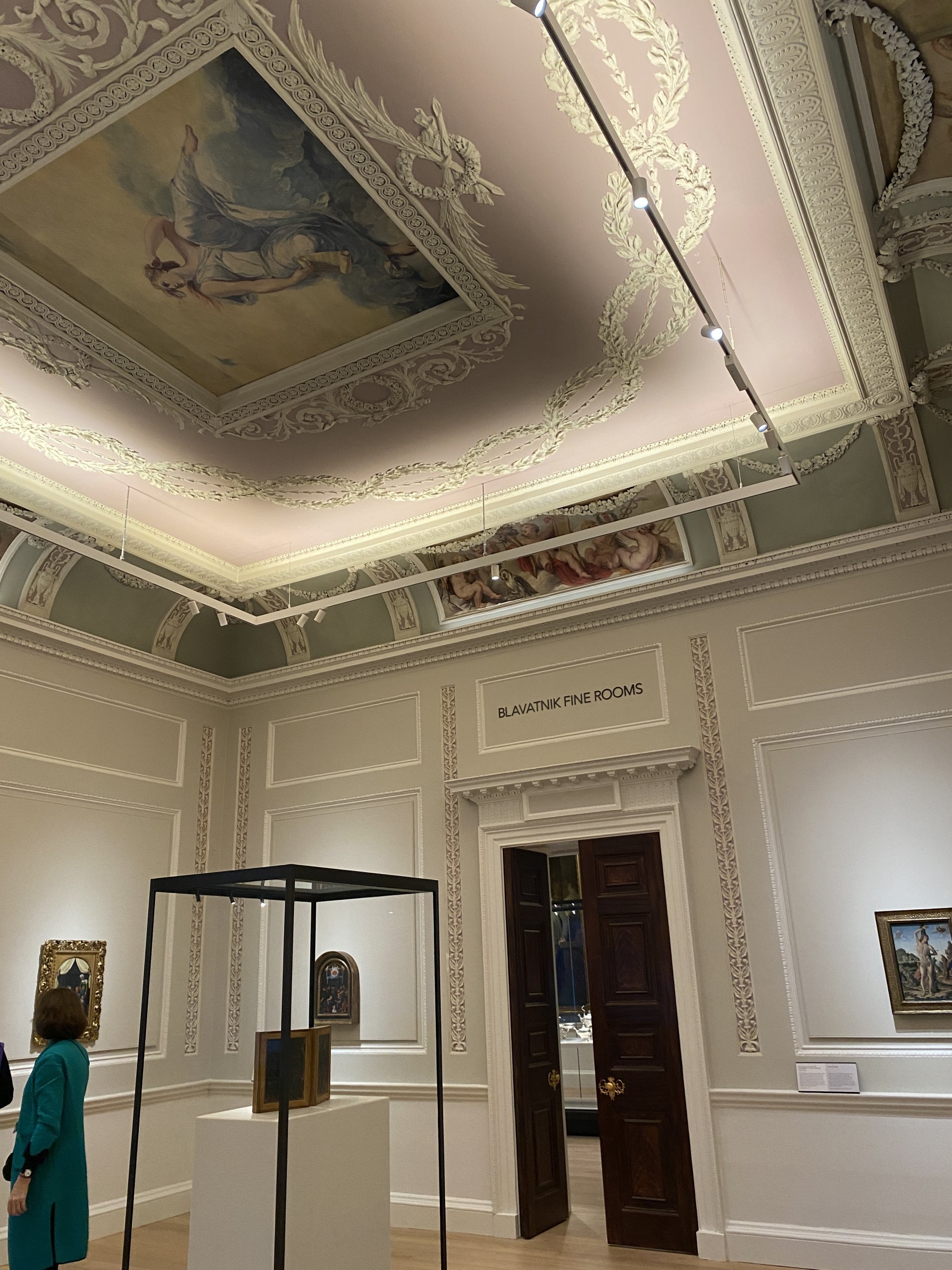 I thought the colors in this painting were extraordinary. The angel Gabriel’s wings look like exotic macaws.

Before you leave this floor, this temporary exhibition (Nov 21 – May 22) can be seen in the gallery next to the lift. It unearths some of the treasures of the Conway photographic Library, including views of sites damaged or destroyed in recent conflict. British photographer Anthony Kersting was one of the most prolific and widely traveled architectural photographers of his generation.

Do admire that staircase again before you walk down to the first floor. 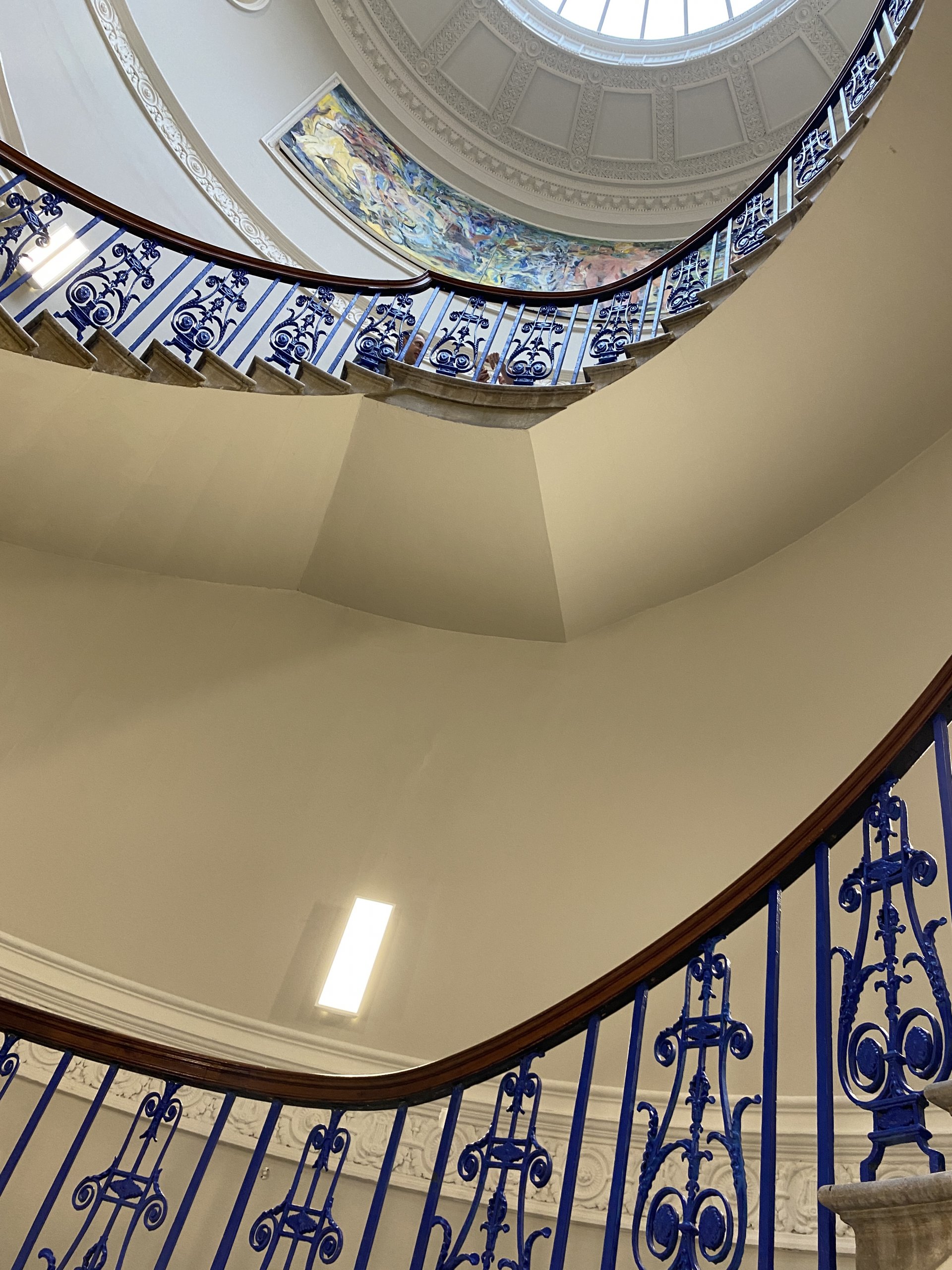 In the Drawings Gallery, this temporary exhibition (Nov 21 – Jan 22) shows a wide range of works from The Courtauld’s collection of British drawings. It includes one of the earliest and smallest works in the collection, a pen, and ink drawing by Isaac Oliver measuring 47 x 59 mm (around 1565-1617), to Henry Moore’s powerful wartime Shelter Drawing (1942). Works from the ‘golden age’ of British watercolor include examples by J.M.W. Turner, John Constable, and Edward Dayes’ panoramic view of Somerset House from the Thames.

Seeing this sketch by James Thornhill reminded me of the Hogarth and Europe exhibition at Tate Britain as William Hogarth married James Thornhill’s daughter. And this design of the Painted Hall at Greenwich made me think of the Fighting Talk exhibition at the Foundling Museum as the foundling it features, George King, was given a place at the Royal Naval Hospital in Greenwich for retired seamen. 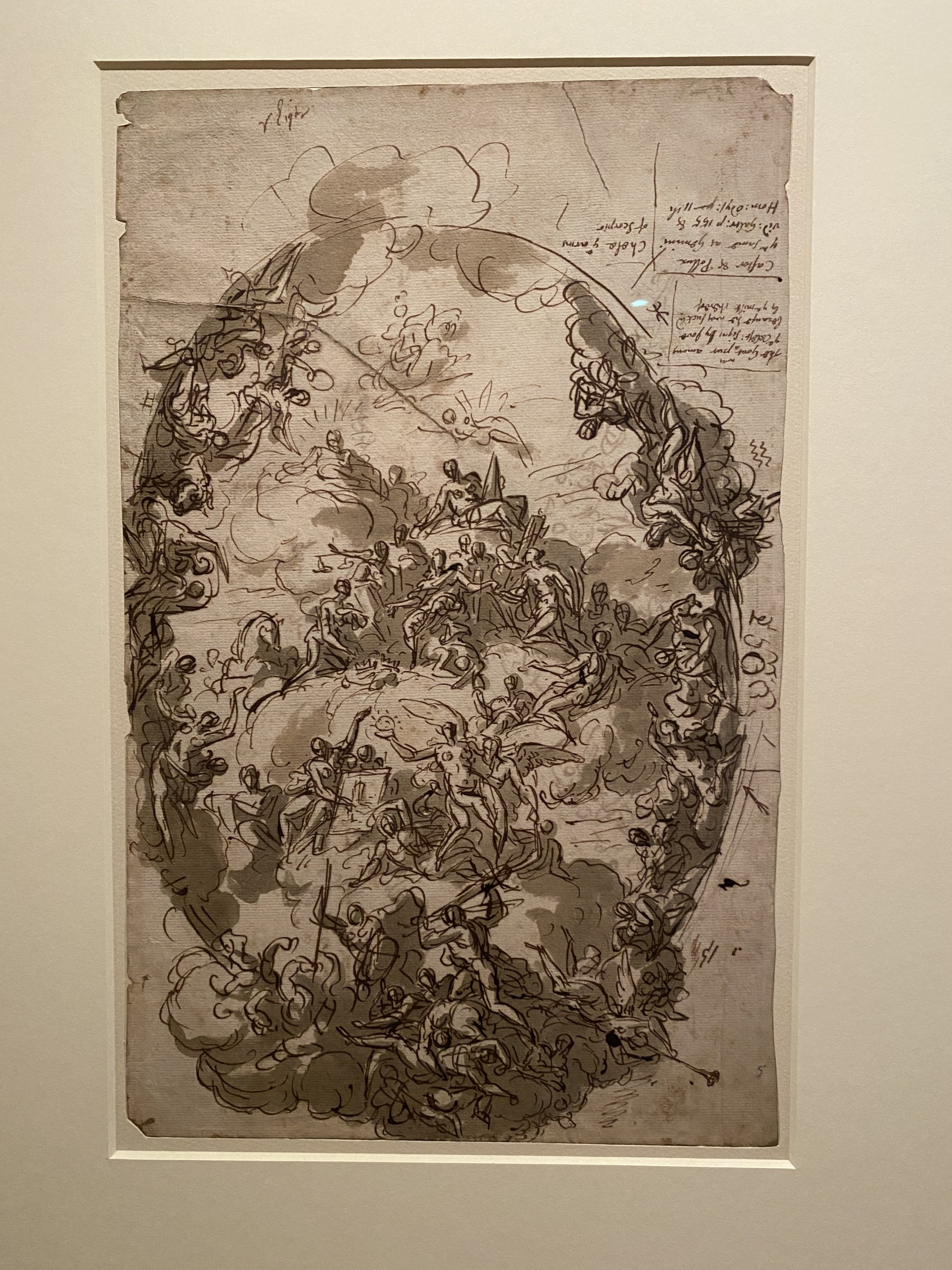 A highlight is a little-known abstract drawing, Vorticist Composition with Figures, Black and White (1915), by Helen Saunders, one of only two female members of the early 20th-century avant-garde Vorticist group.

This first-floor space was used by staff of the Royal Academy when it occupied the building from 1780 to 1837. Designed as a mezzanine, or half-floor with a lower ceiling height, it was functional and not open to visitors.

Now, this new gallery displays works mostly made to inspire devotion and prayer in churches and at home. This important collection of paintings and decorative arts from the Medieval and Early Renaissance periods includes fine examples of Islamic metalwork alongside works from Italy and Northern Europe. 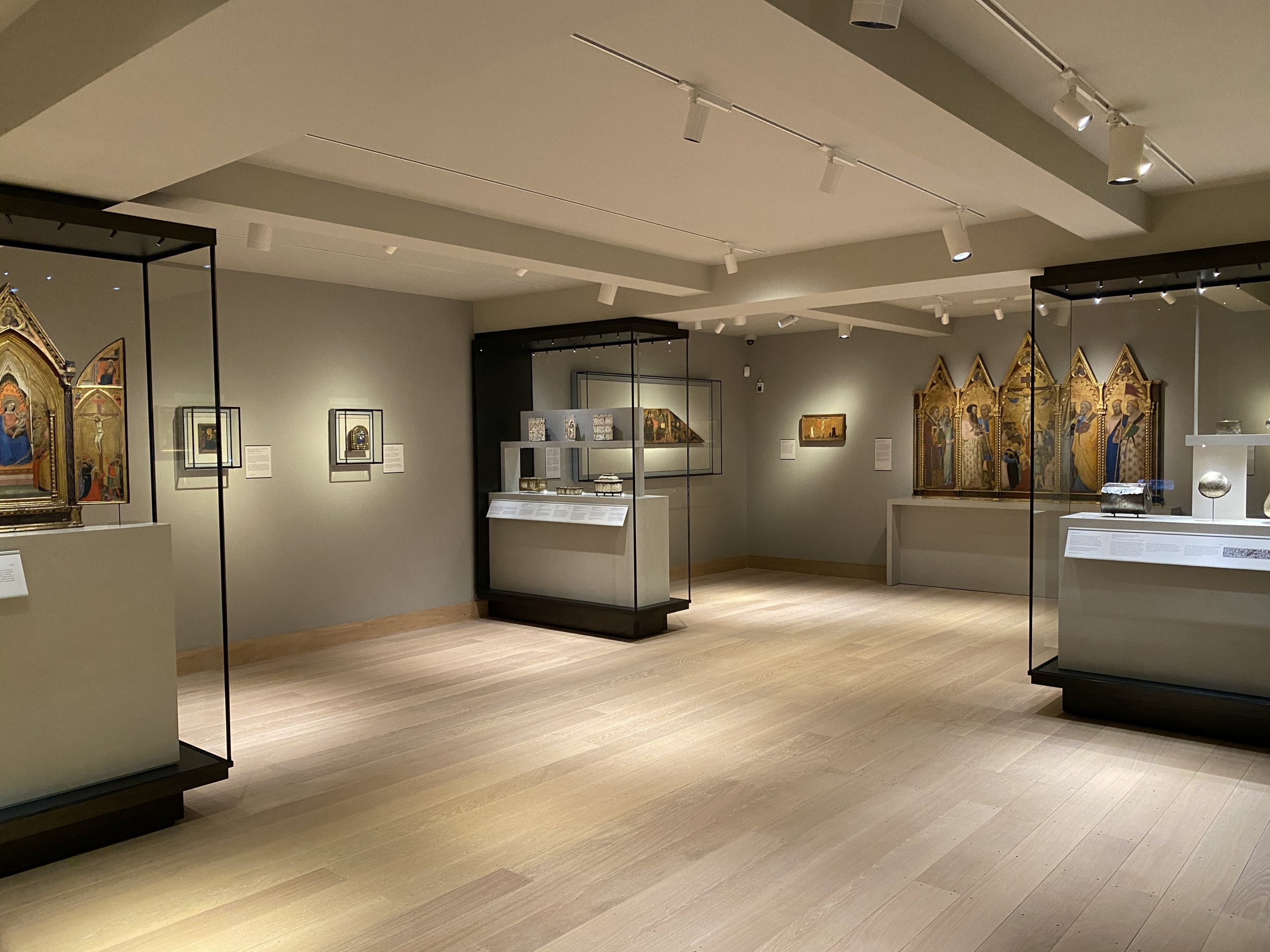 The Courtauld Shop features a range of exclusive and carefully curated products inspired by the art and artists in the collection. (It wasn’t yet ready when I visited for a preview.)

The Art Café is on the ground floor opposite the main Gallery entrance. It’s an all-day café and bar with a warm, vibrant interior inspired by the bohemian creativity of the Bloomsbury Group. (Again, it wasn’t ready to see when I visited for a preview.)