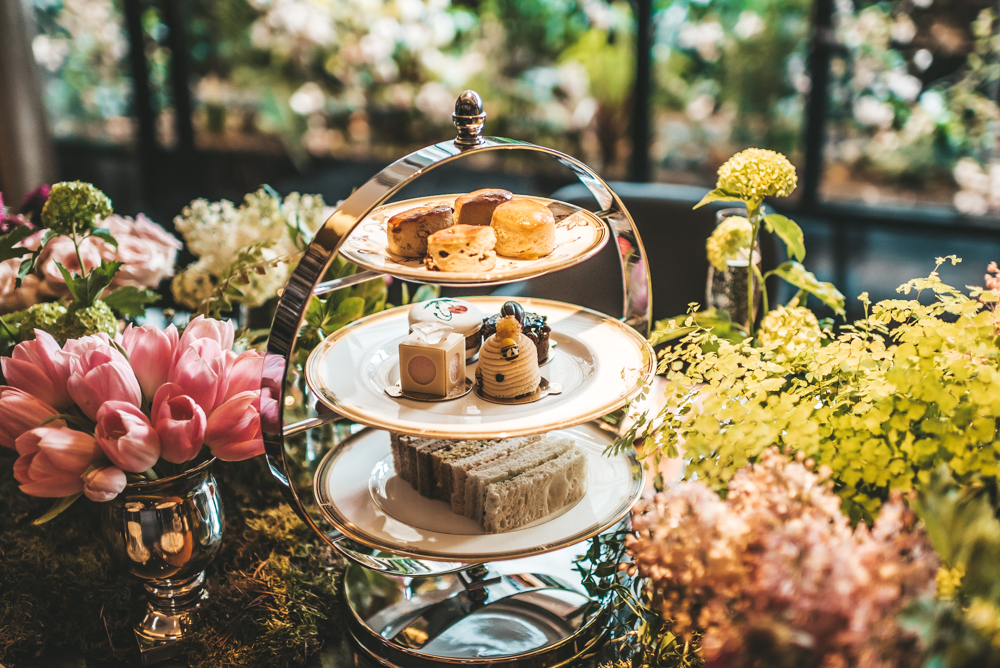 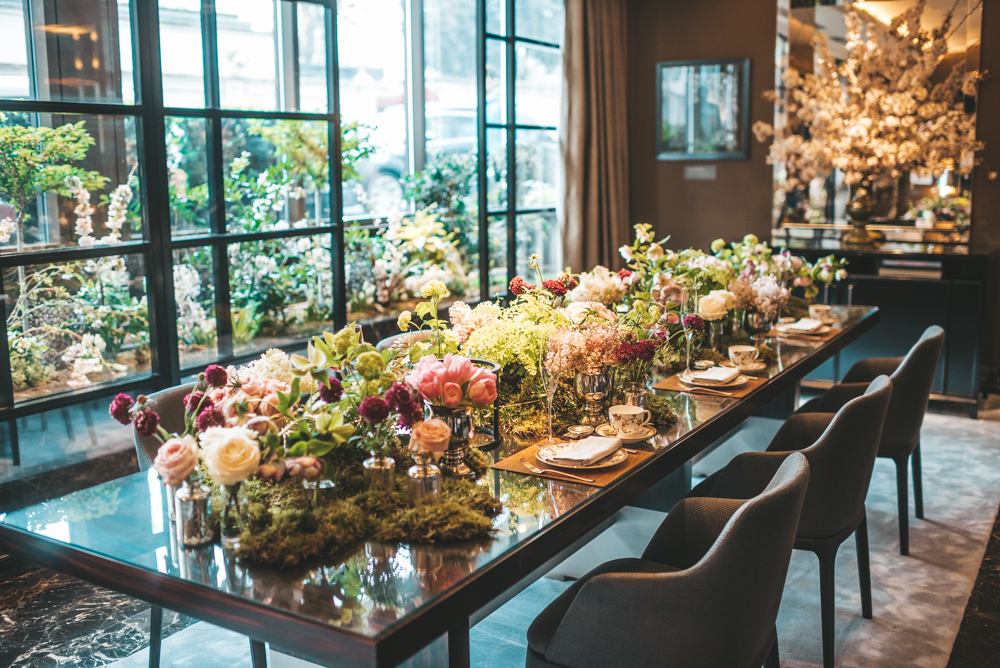 This spring the hotel has partnered with the Chelsea Physic Garden for a floral fiesta and a gorgeous new afternoon tea! Binny and I headed to the hotel one afternoon to meet the directors of the Chelsea Physic Garden and to check out the brand new Garden Tea. The table was beautifully laid out with flowers from the garden – a total feast for the eyes! 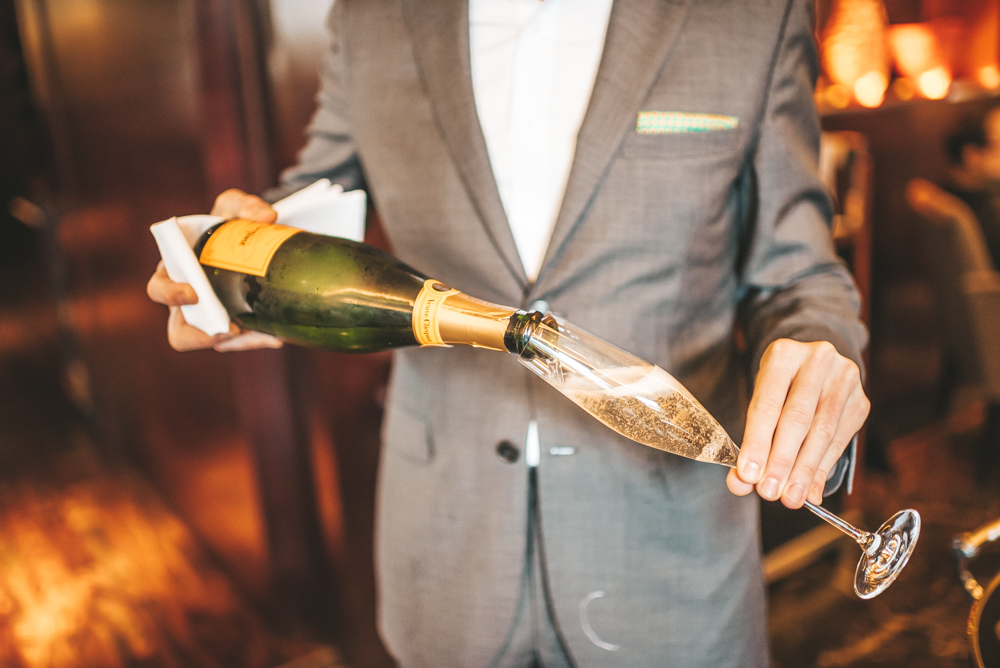 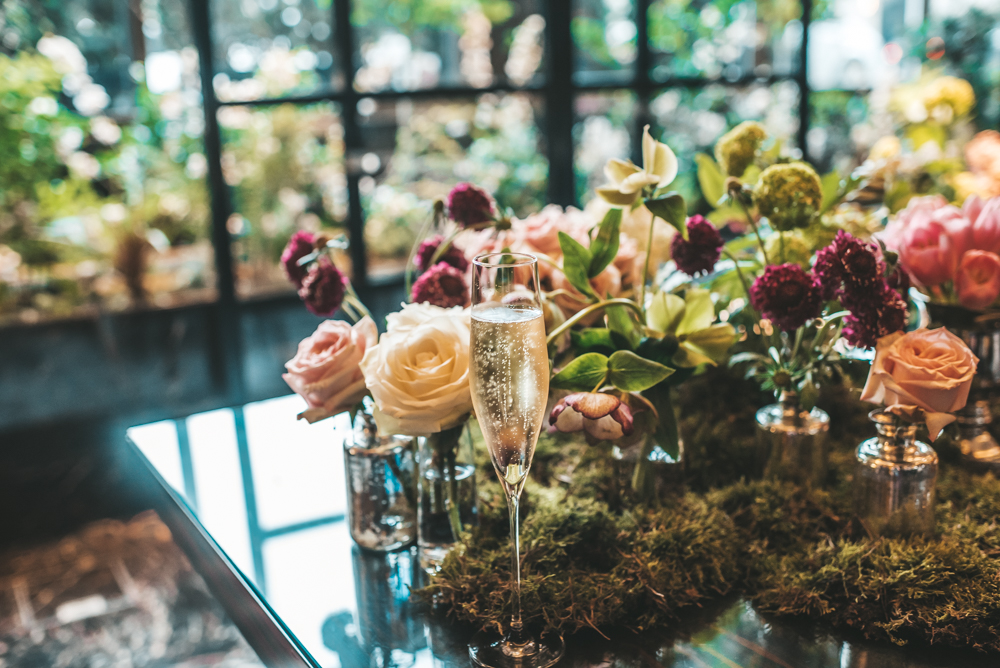 In true Four Seasons style it wasn’t long before a cold glass of Veuve-Clicquot was pressed into our hands and we took a seat around the floral table. 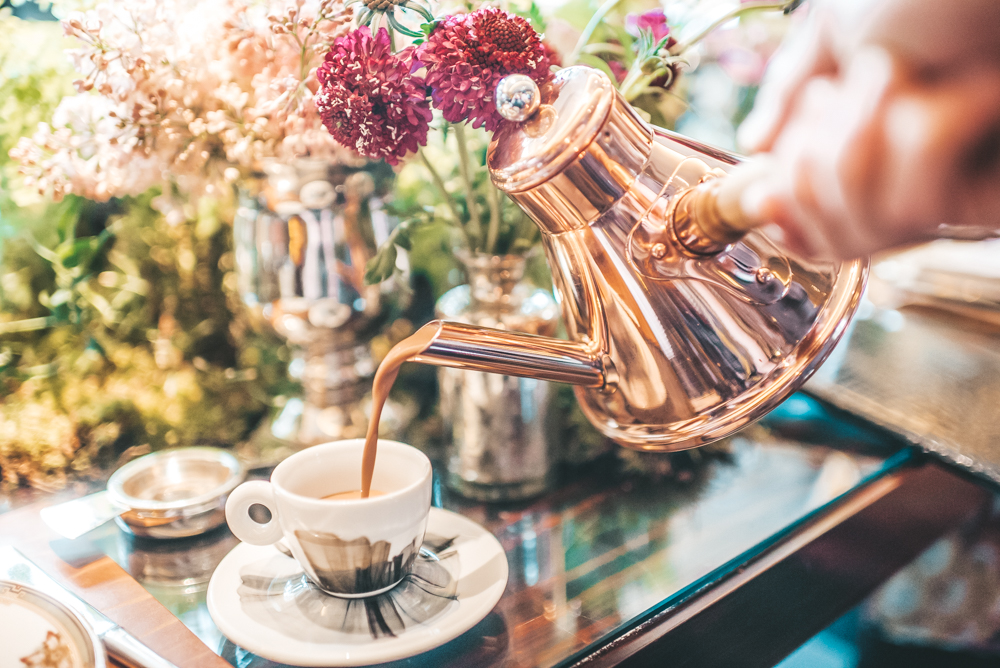 The afternoon tea starts with something a little different – a tasting of the original hot chocolate recipe brought back to London from Jamaica by Sir Hans Sloane. After tasting local drinks made with cocoa and water, he added milk and sugar to make it more tasty.

The drink became more popular as Hans Sloane became physician to the royal family and eventually William III even built a chocolate kitchen at Hampton Court Palace. The recipe was eventually bought by Cadbury’s making Hans Sloane a very wealthy man! HIs own name may sound familiar as not only was Hans Sloane the primary benefactor of the Chelsea Physic Garden, he also gave his name to Sloane Square, an area of land once own jointly by him. Needless to say, Hans Sloane’s recipe also included a little Four Seasons magic and was absolutely delicious!

The Chelsea Physic Garden is London’s oldest botanical garden and was established way back in 1673 by Apothecaries to grow medicinal plants. Today it contains over 5,000 edible and medicinal plants that have had impact around the world. The Garden Tea celebrates this important and historical place by using seasonal ingredients picked from the Garden itself. 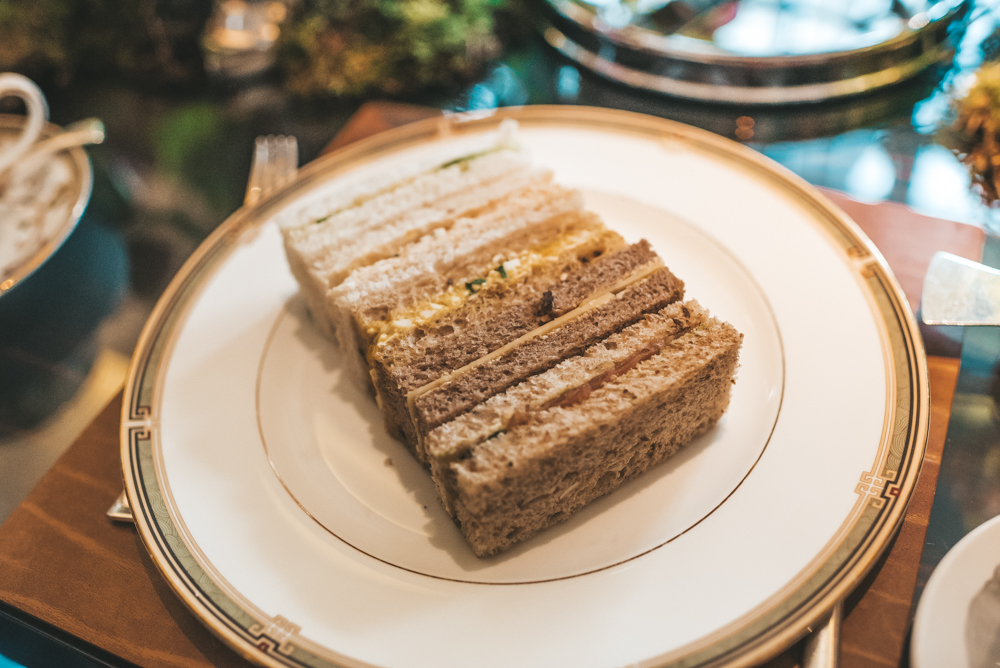 After sipping my hot chocolate and ordering a lemongrass and ginger tea, I got started on the sandwiches. Care is taken to keep everything fresh and seasonal whilst adhering to afternoon tea traditions. The classic cucumber sandwich is served in white bread with lemon butter whilst my perennial favourite the smoked salmon is cured with Cornish Manuka and paired with borage, sorrel and cream cheese and prepared with cumin bread. The crab comes from Portland Shellfish in Dorset and is served with chive and breakfast radish whilst the Cheddar cheese hails from Holden’s Farm and includes pickled vegetables served on cocoa rye bread. Finally the egg sandwich has an Indian twist, served curried with a coriander salad on seeded Vadouvan bread. 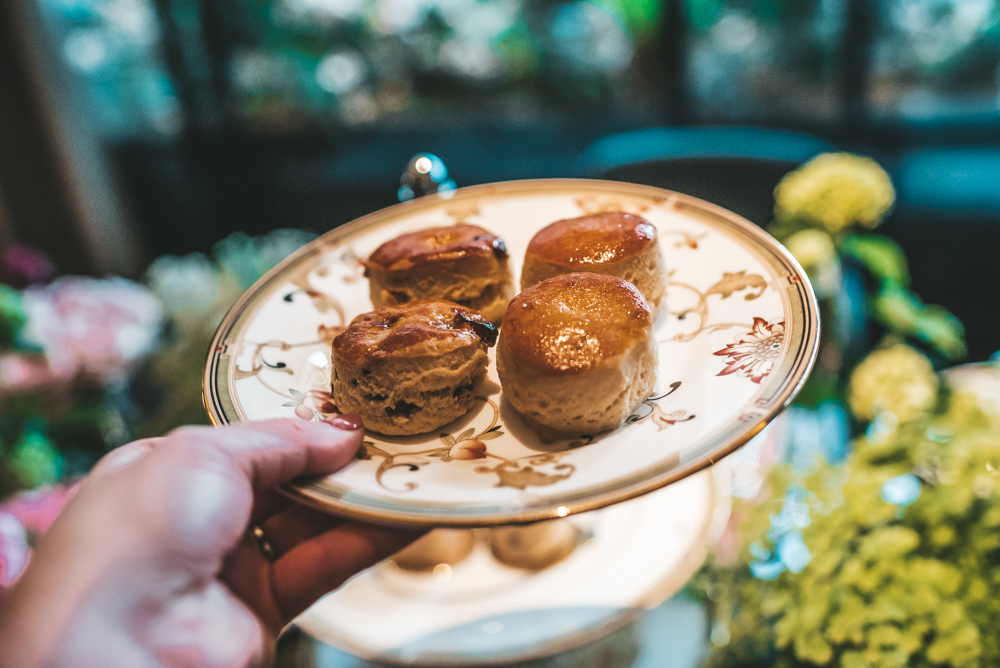 I know the scone course is one of the most anticipated by many and The Four Seasons Hotel London at Park Lane never disappoints. Strawberry and Vanilla jam and Citrus Paradisi and Asam Tea have been especially selected to accompany the warm plain and raisin scones as well as the classic clotted cream. 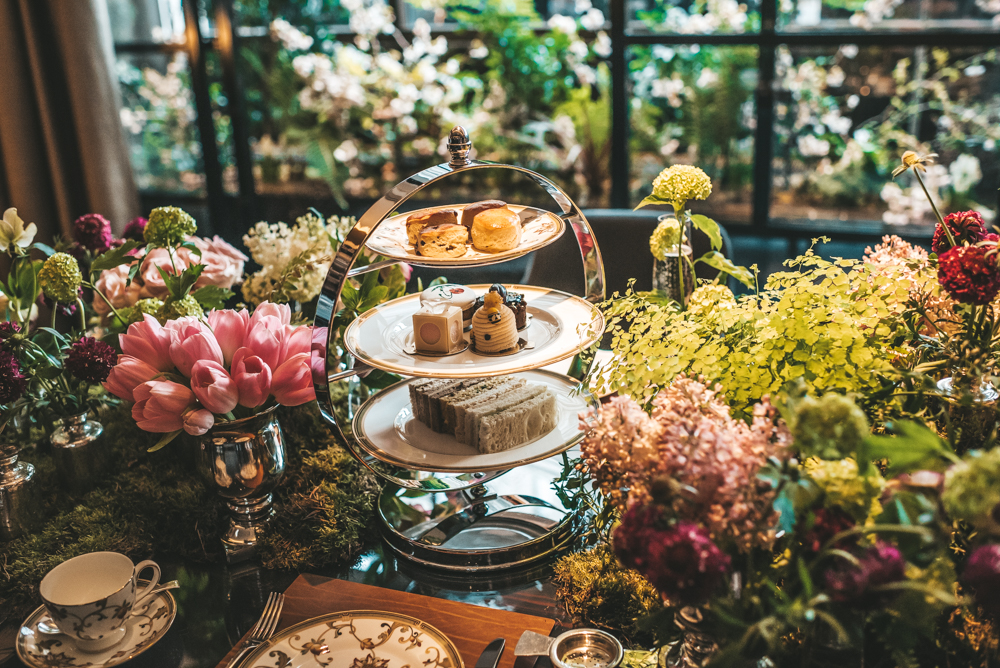 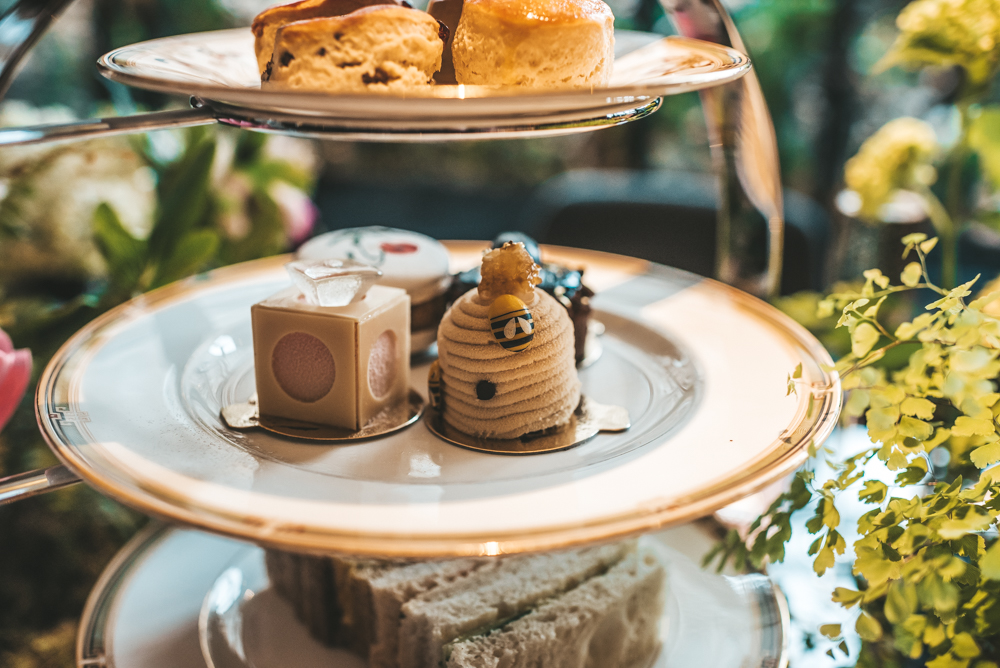 Of course it is the pastries that appeal to the senses the most and Executive Pastry Chef David Oliver has been inspired by different areas of the Chelsea Physic Garden to create some absolutely stunning sweets.  The adorable beehive cake is inspired by the hives at the Garden that produce honey until the end of summer. The pastry itself is made from honey and oat biscuit blueberry jelly and almonds. The little bee on the hive is so cute and really adds to the presentation. Inspired by the Perfume section of the Garden, the next pastry is a beautifully delicate orange blossom and jasmine mousse served with cinnamon and cocoa nib biscuit and delicious spiced cream. It comes with a real spritz of perfume so so that you can really feel the atmosphere of the garden. 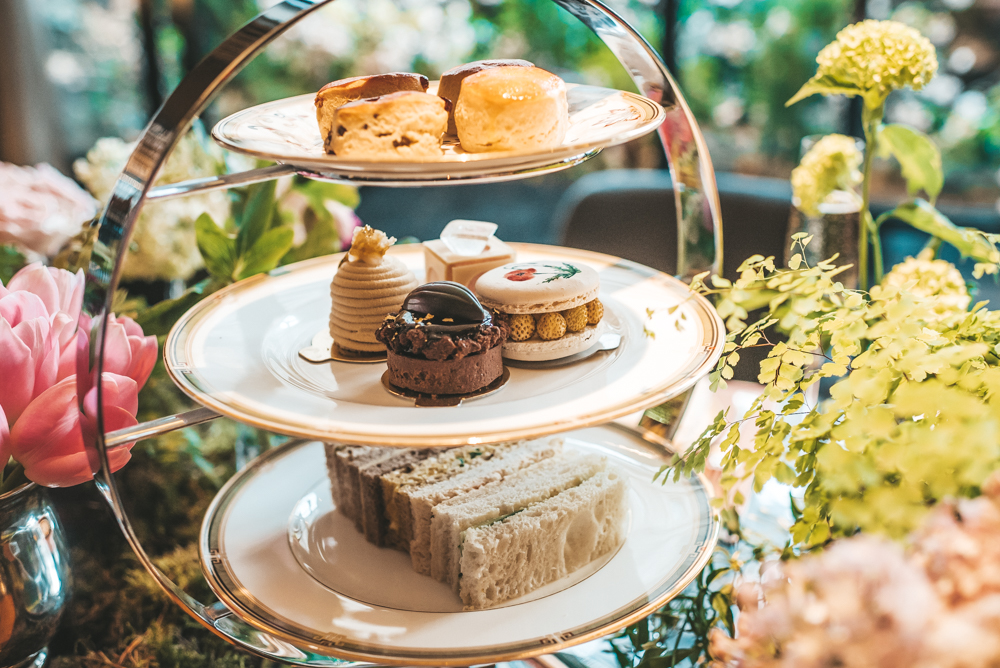 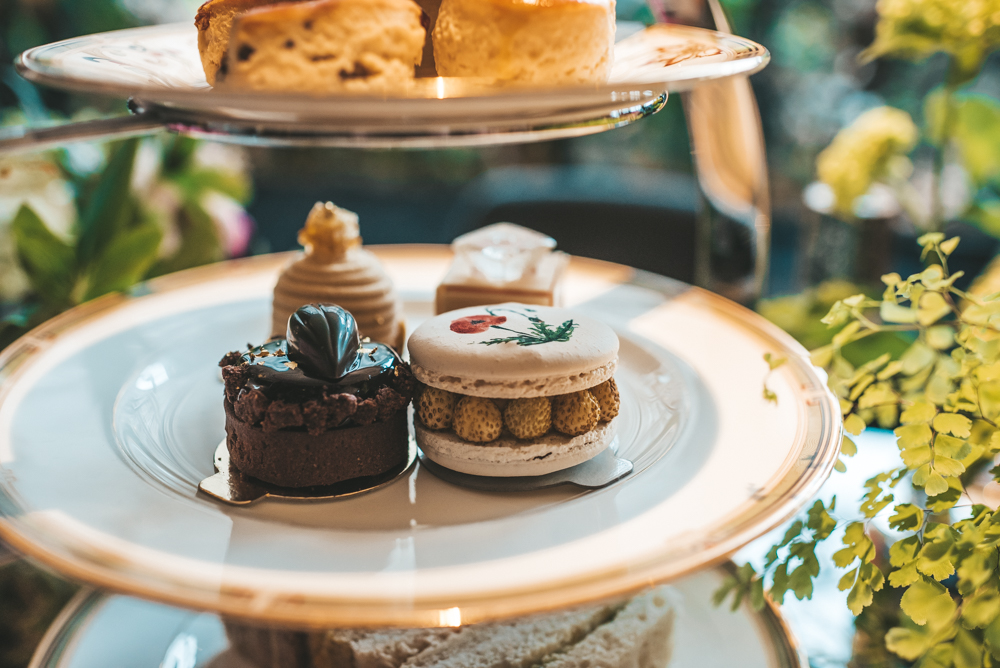 What’s an afternoon tea without at least one chocolate pastry and the Chocolate and Long Pepper Tart is a celebration of cocoa with a melt in the mouth taste and a spicy Indian twist. Last but not least, my absolute favourite, inspired by British Native plants the macaron has actually been hand painted and contains local wild strawberries and poppies. 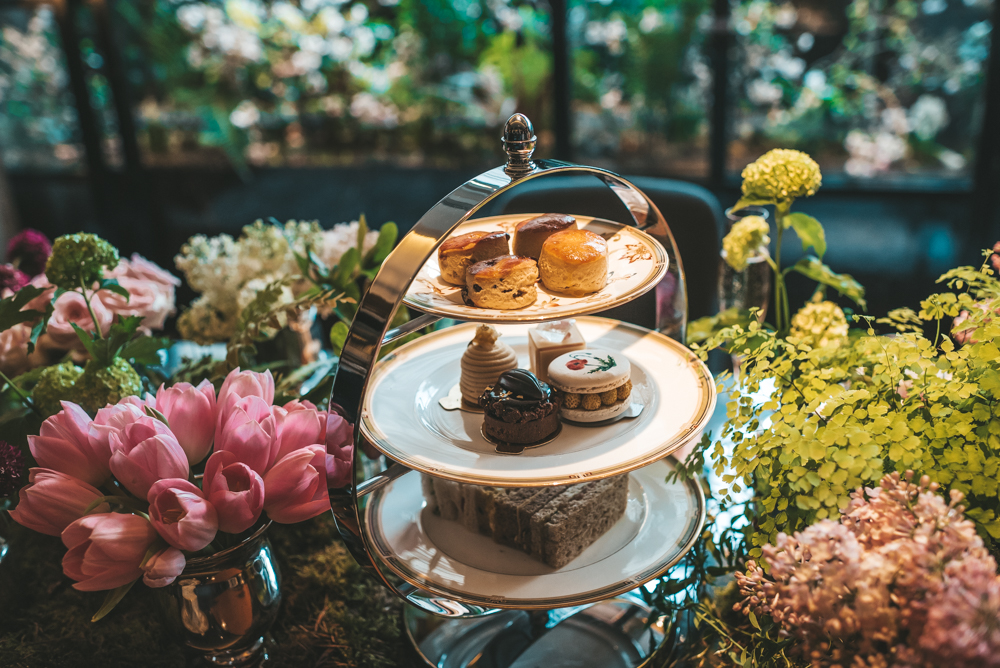 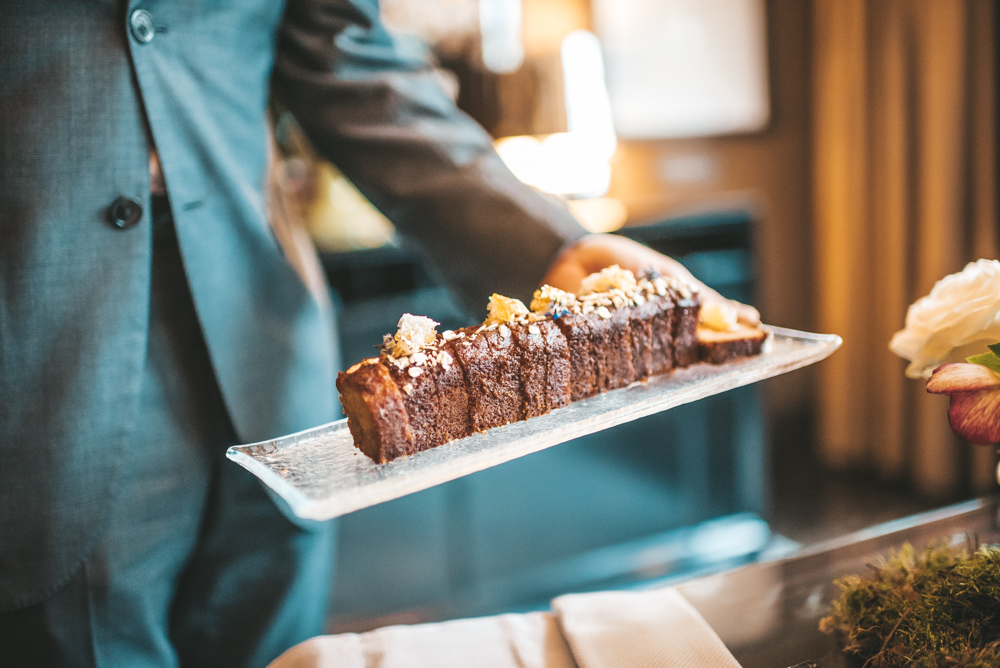 Four Seasons Hotel London at Park Lane always throw in an extra treat and at the Garden Tea, this is no exception. A delicious honey cake was the perfect way to finish off an absolutely wonderful tea.

The Garden Tea is served daily from 1:30 pm to 6:00 pm (last seating at 5:30 pm) in Amaranto Lounge and starts from £42 per person or £55 including a glass of Veuve Clicquot Brut Champagne.

Our afternoon tea was complimentary.

Zoo Keeper for a Day at Drayton Manor Park