London Alert: Giant Harry Potter Wands to Light Up the Path to St Paul’s from October to November 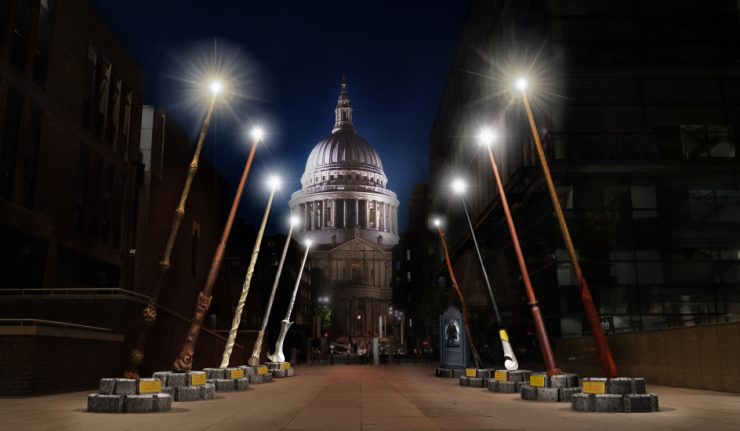 Attention Harry Potter fans who will be in London later this month! In celebration of the upcoming sequel to Fantastic Beasts and Where to Find Them, 9 giant wands will light the path from Millenium Bridge to St Paul’s Cathedral to promote the film but also raise awareness of JK Rowling’s charity work Lumos (which seeks to end the institutionalization of children).

Next month, as excitement builds for the 16 November release of Warner Bros. Pictures’ highly anticipated new Wizarding World adventure Fantastic Beasts: The Crimes of Grindelwald, an installation of nine giant wands will illuminate the walkway between Millennium Bridge and St. Paul’s Cathedral in London to help raise awareness for J.K. Rowling’s charity Lumos, whose mission is to end the institutionalisation of children around the world.

Standing fifteen feet tall, the wands – bringing to life those belonging to some of the most beloved characters in the Harry Potter and Fantastic Beasts films – are the centrepiece of the new installation, Fantastic Beasts: Wizarding World Wands supporting Lumos. It is set to light up Peter’s Hill every night at 6:45pm from 18th October to 12th November.

Created in association with Lumos as part of the City of London Arts Initiative for public art, the installation also kicks off a series of exciting activities for fans every “Wizarding Wednesday,” including wand training and a live performance of music from the Harry Potter and Fantastic Beasts films by a military marching band.

So, if you’re in London later this month and early next month – pop down to this bit of London and see the magic wands in person. Very cool!

London Alert: Giant Harry Potter Wands to Light Up the Path to St Paul’s from October to November – Londontopia – The Website for People Who Love London